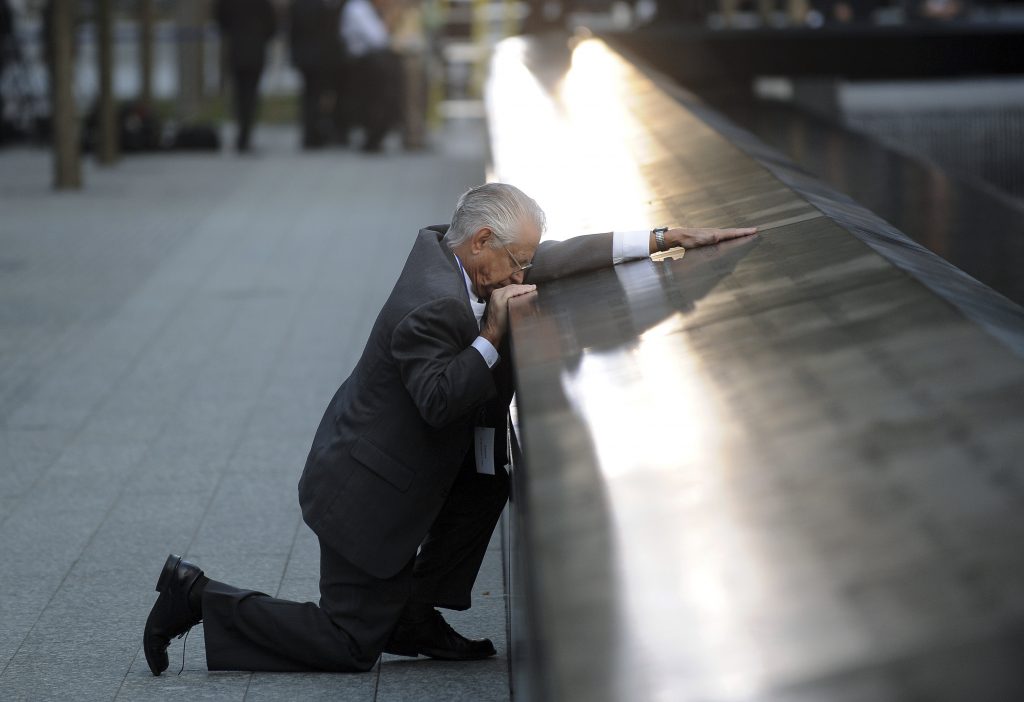 Robert Peraza, who lost his son Robert David Peraza, pauses at his son’s name at the North Pool of the 9/11 Memorial during tenth anniversary ceremonies at the site of the World Trade Center in New York. Photo by Justin Lane/Reuters

WASHINGTON — Approval of a bipartisan bill that would allow families of Sept. 11 victims to sue the government of Saudi Arabia puts Congress on a collision course with President Barack Obama on the eve of the 15th anniversary of the attacks.

The House passed the legislation Friday by voice vote, about four months after the measure cleared the Senate despite vehement objections from Saudi Arabia. Fifteen of the 19 hijackers were Saudi nationals.

The White House has signaled Obama would veto the legislation over the potential for the measure to backfire. The Obama administration cautions that if U.S. citizens can take the Saudis to court, then a foreign country could in turn sue the United States. There also is apprehension the bill would undermine a longstanding yet strained relationship with a critical U.S. ally in the Middle East.

Votes from two-thirds of the members in the House and Senate would be needed to override a veto.

There was no immediate comment from Saudi Arabia, which was preparing for the annual hajj pilgrimage beginning Saturday.

The legislation gives victims’ families the right to sue in U.S. court for any role that elements of the Saudi government may have played in the 2001 attacks that killed thousands in New York, the Washington, D.C., area and Pennsylvania.

Rep. Ted Poe, R-Texas, said the U.S. government should be more concerned about the families of the victims than “diplomatic niceties.” Poe said he doesn’t know if the Saudi government had a role in the attacks that killed more than 3,000 people.

“That’s for a jury of Americans to decide,” Poe said.

The vote came after House members from both parties briefly adjourned to commemorate the anniversary of the attacks. House Speaker Paul Ryan, R-Wis., led a moment of silence on the Capitol steps, and lawmakers sang “God Bless America” in remembrance of 9/11, when lawmakers gathered in the same location to sing the song immediately after the attacks on New York and Washington.

The Justice Against Sponsors of Terrorism Act had triggered a threat from Riyadh to pull billions of dollars from the U.S. economy if the legislation is enacted. But Saudi Foreign Minister Adel bin Ahmed Al-Jubeir denied in May that the kingdom made any threats over the bill. He said Riyadh had warned that investor confidence in the U.S. would shrink if the bill became law.

“In fact what they (Congress) are doing is stripping the principle of sovereign immunities, which would turn the world for international law into the law of the jungle,” Al-Jubeir said.

The House vote came two months after Congress released 28 declassified pages from a congressional report into 9/11 that reignited speculation over links at least a few of the attackers had to Saudis, including government officials. The allegations were never substantiated by later U.S. investigations into the terrorist attacks.

Brian McGlinchey, director of advocacy website 28pages.org, said making the documents public “strengthened the resolve of 9/11 families and other advocates of justice to bring about the enactment” of the bill.

A decision by Obama to veto legislation “that would give 9/11 families their well-deserved day in court would truly stain his legacy,” McGlinchey said.

In a separate development, a bipartisan group of senators announced Thursday that they’ve introduced a joint resolution of disapproval to block the Obama administration’s proposed sale of more than $1 billion worth of U.S. weapons to Saudi Arabia.

The war is pitting Yemen’s internationally recognized government and a Saudi-led coalition against the Shiite rebels known as Houthis, who are allied with army units loyal to a former president. The Saudi-led coalition has been carrying out airstrikes in Yemen since March 2015.

“Selling $1.15 billion in tanks, guns, ammunition, and more to a country with a poor human rights record embroiled in a bitter war is a recipe for disaster and an escalation of an ongoing arms race in the region,” Paul said.