House Republicans are working on a fix for family separation

Key House Republicans trying to forge an immigration deal have agreed to work on a legislative fix to end family separation for asylum seekers, among other issues facing immigrants, multiple GOP offices involved in the negotiations told the PBS NewsHour.

Republicans are trying to forge an internal compromise on border security and the fate of so-called “Dreamers,” or people brought to the U.S. illegally as children.

The latest development is a sign of rising concern for families and children affected by immigration policy. But despite some areas of unity, GOP conservatives and moderate have not been able to agree on a final deal, several sources involved in the process said. The opposing factions were set to meet Tuesday evening, but multiple offices involved were not optimistic a deal would emerge.

This means moderates are likely to trigger what’s known as a “discharge petition” that could force other immigration votes in two weeks. Here’s what we know.

When did family separation enter the talks?

The issue of family separation entered the Republican talks in recent days amid increased media attention.

In May, the Trump administration began enforcing its new “zero-tolerance” policy, which charges adults crossing illegally as felons in criminal court. Previously, the federal government’s default position had been to charge them in civil court and detain them in immigration facilities. Felony criminal charges, instead, send the adults to prison and trigger automatic separation from their children at that point.

Despite some areas of unity, Republican negotiators aren’t close to finalizing a larger deal.

It is not yet clear how many families have been separated as a result of the policy. In May, a Customs and Border Patrol official told a Senate committee that in the first two weeks of the Trump administration’s “zero-tolerance” policy, “658 children with 638 adults” were placed in the prosecution process. It’s unclear how many of these 638 children were separated from their guardians. But advocates placed the figure at hundreds or thousands.

Negotiators are circling around ideas that would ensure that families seeking asylum are not divided while their cases are being processed.

READ MORE: What happens when a child arrives at the U.S. border?

That is not simple. But even more complicated are discussions over how to keep families intact after they’ve been apprehended for crossing illegally but have not initiated the asylum process. There is concern among GOP lawmakers about how to determine whether family members are really related, and when human traffickers may be forcing children to pretend they are part of a family in order to enter the country.

In implementing the “zero-tolerance” policy, the Trump administration cited a 1997 Clinton-era agreement known as the “Flores Settlement,” which requires the federal government to release and not detain immigrant children. But the offices of multiple House GOP lawmakers involved in the current negotiations said they do not believe the Flores rule was intended to separate families.

The White House did not respond to a request for comment for this story. 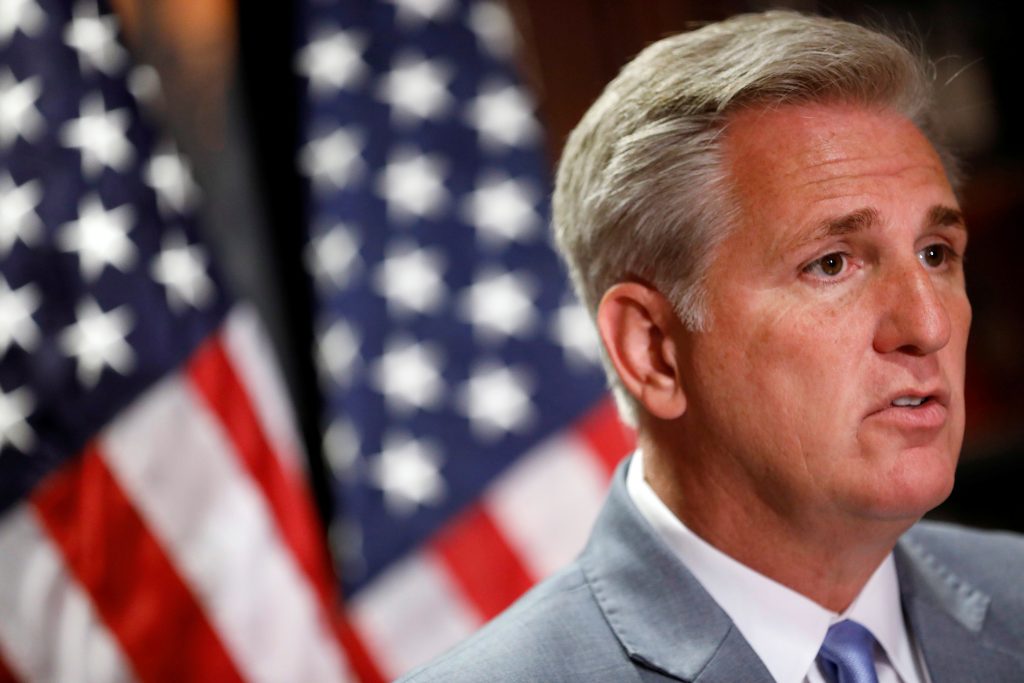 House Majority Leader Rep. Kevin McCarthy, R-Calif., and other Republican leaders are trying to bring moderates and conservatives on board with a broader immigration deal. REUTERS/Aaron P. Bernstein/File Photo

The inclusion of family separation comes at a critical hour for the all-Republican talks in the House. Moderates pledged that if no acceptable deal was hammered out by Tuesday, they would activate what’s known as a discharge petition, joining Democrats to go around GOP leadership and force votes on other immigration measures.

Such a petition would go into effect if it receives signatures from a majority — or 218 — members of the House.

“There will either be a deal today, or we will hit 218 signatures on the discharge petition,” a spokeswoman for Rep. Jeff Denham, R-Calif, one of the moderate leaders involved in the talks, wrote in an email Tuesday.

As of Tuesday morning, the petition had 215 signatures, but sources told the NewsHour that at least two other House members had committed to sign.

Even if the discharge petition is triggered, it could be overridden if a separate immigration deal emerges with wide House Republican support.

By midday, it looked increasingly likely that the discharge petition would be triggered by the end of the Tuesday. Multiple sources said negotiators were making progress, but that many details remained unresolved.

A discharge petition would launch a potential series of votes on four immigration-related bills — ranging from conservative to moderate proposals — starting on June 25.

But even if the discharge petition is triggered, it could be overridden should a separate immigration deal emerge with wide House Republican support.

Should any bill survive the House process, it would face an uncertain fate in the Senate.

The PBS NewsHour’s Yamiche Alcindor contributed to this story.

Left: Hundreds of immigrant rights advocates and others participate in rally and and demonstration in New York against the Trump administration's policy that enables federal agents to take migrant children away from their parents at the border on June 1, 2018. (Photo by Spencer Platt/Getty Images)