Boehner: House Will Produce Its Own Immigration Legislation 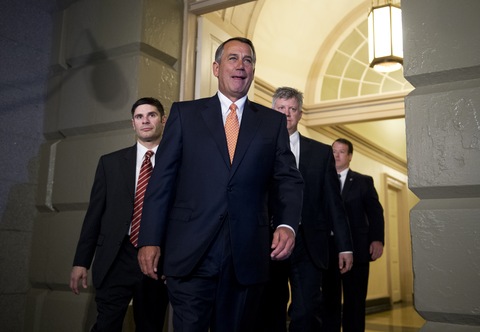 House Speaker John Boehner, R-Ohio, has been saying for months it’s up to the Senate to get the ball rolling on a major overhaul of the nation’s immigration system.

When that happens, he said, the House will take a look.

But as Senate Majority Harry Reid, D-Nev., laid out the path forward for next month’s Senate debate on a comprehensive bill that seems to have wide support, Boehner cautioned that his chamber won’t just accept that measure, no matter how bipartisan.

Boehner issued a statement Thursday signed by the members of his leadership team and Judiciary Committee Chairman Bob Goodlatte, R-Va., that takes a new approach and suggests Republicans want more ownership of the issue. Whether that will derail the fragile agreement forged across the rotunda remains unclear.


“While we applaud the progress made by our Senate colleagues, there are numerous ways in which the House will approach the issue differently,” they said. “The House remains committed to fixing our broken immigration system, but we will not simply take up and accept the bill that is emerging in the Senate if it passes. Rather, through regular order, the House will work its will and produce its own legislation.”

Translation: Get ready for a long summer.

The GOP statement said it’s incumbent upon them to engage in “a robust debate and amendment process” to fix a dysfunctional immigration system. It closed: “The House goal is enactment of legislation that actually solves these problems and restores faith in our immigration system, and we are committed to continuing the work we’ve begun toward that goal in the weeks and months ahead.”

Some activists fretted that House Republicans would halt — or at least slow-walk — what’s seemed like a speedy process to deal with the nation’s estimated 11 million undocumented immigrants.

But Sen. Marco Rubio, R-Fla., a member of the so-called Gang of Eight senators who crafted the legislation and helped shepherd it through a 13-5 Judiciary Committee vote this week to send it to the floor, suggested such a process would be just fine.

In a statement Thursday, Rubio said that this is “the way our nation is supposed to solve problems.”

“Our republic works best when Congress solves problems through open and transparent debates, which is exactly how immigration reform will be addressed this summer,” Rubio said. “Conservatives in both chambers of Congress agree the status quo on immigration is bad for our people, our security and our economy. And we agree we must end today’s de facto amnesty, modernize our legal immigration system, deal with our illegal immigrant population by requiring that strict measures be achieved, and that we put in place tough border security and interior enforcement measures so that we never repeat this problem.”

Expect to hear that a lot as Rubio continues his push to sell the measure to wary conservatives on the talk radio and cable news circuit. He’ll appear at a 9 p.m. EDT town hall meeting broadcast on Fox News’ Sean Hannity show Friday night.

Reid said on the Senate floor that the bill’s negotiators are still hammering out amendments. Once that’s done, he’ll formally announce a schedule that would set up debate either the first or second week of June.

Gang of Eight members expect to see the bill on the floor the week of June 10 after the farm bill is completed. Their strategy, writes The Hill’s Alexander Bolton: Stick together. From his story:

The group plans to meet daily when their bill hits the floor in June and will encourage giving colleagues free rein to offer amendments, according to a person familiar with their discussions.

“Everyone is going to have to take tough votes,” said a member of the group who attended a strategy session Thursday just off the Senate floor. … The purpose of the daily meetings will be to give members of the gang a chance to discuss the amendments coming to the floor that day and how they will vote.

The bipartisan coalition behind the 2007 Senate immigration reform bill splintered over controversial amendments. The 2007 bill suffered a death blow when the Senate voted 49 to 48 to adopt an amendment sponsored by former Sen. Byron Dorgan (D-N.D.) to sunset a guest-worker program after five years.

The Gang of Eight wants to avoid a similar debacle this summer.
The group did not specifically discuss what vote threshold to set for amendments, but members expect it will require 60 votes to make changes to the bill.

Chris Cillizza and Sean Sullivan write for the Washington Post that the IRS scandal may have helped immigration along, since the committee markup was “entirely drowned out by a series of House and Senate committee hearings on the IRS’ acknowledged targeting of conservative groups.”

While the Senate side is looking easy, bipartisan negotiators in the House are still trying to strike a deal. One major sticking point is how immigrants granted provisional legal status will be able to use the health care system. They say they are close, but won’t give a final sign-off until they return from the Memorial Day recess.

On Wednesday’s NewsHour, we began with a series of discussions aimed at explaining the main pieces of the proposed Senate legislation. It’s called “Inside Immigration Reform.”

On Thursday, Ray Suarez looked at the temporary visa program for highly skilled immigrant workers, called H-1B, and its flaws and proposed changes. The issue was at the center of a key compromise in the Senate Judiciary Committee that enticed Sen. Orrin Hatch, R-Utah, to join Democrats and the Republican co-sponsors in support of the overall bill.

Suarez spoke with two leading researchers on the issue, Ron Hira from the University of Rochester and Vivek Wadhwa of Stanford.

Hira cautioned that more H-1B visas will mean less job opportunities for America, a perspective advanced by labor unions such as the AFL-CIO.

“I think there are some safeguards in the bill, but there’s a really large increase of H-1Bs, and I think the reality is it doesn’t fix the fundamental flaws, which is that H-1B guest workers can be paid below-market wages, so the wage floors are still too low, and that companies can bypass American workers and even displace American workers with guest workers,” he said.

But Wadhwa’s argument, to create more opportunities for highly skilled workers from other countries to come to the U.S., start companies and eventually stay as permanent residents, is sympathetic to the needs of the tech industry.

“If you talk to any executive in Silicon Valley, you talk to any company, they will tell you they are starved for talent, they can’t find enough workers who can help them build competitive technologies,” he said. “There is a dire shortage of skills over here,” Wadhwa said. “We have got to make the pie bigger for everyone, so that we can create more jobs and fix this economy. That’s what these technology companies in Silicon Valley are doing.”

He wrote an op-ed in Thursday’s Washington Post highlighting other countries’ attempts to lure foreign entrepreneurs.

And ComputerWorld tracked the top companies that sponsor H-1B visas and find many to be offshore outsourcing companies.

Follow along with each development on our immigration page as the NewsHour brings you the analysis you know and trust.

The nearly one-hour speech President Barack Obama delivered Thursday outlining his administration’s counter-terrorism policy will surely not be the last words said on the topic.

As we noted Thursday, the president defended the policy of using drone strikes and renewed his calls for Congress to allow for the transfer of detainees from Guantanamo Bay to U.S. “supermax” prisons, shutting down the facility.

The Washington Post’s Scott Wilson found the speech to have “reflected an unusual ambivalence from a commander in chief over the morality of his administration’s counterterrorism policies.”

Code Pink’s Medea Benjamin repeatedly interrupted Mr. Obama. The Defense Department said she got into the room by pretending to be reporter. The president used that as a hook to say he believes in free speech and, “Journalists should not be at legal risk for doing their jobs.”

The NewsHour examined the speech in detail. Watch Jeffrey Brown’s report here or below:

A trio of New York Times reporters took questions on drones ahead of the president’s speech.

Yahoo News: @terrymcauliffe brother “winced” at Terry’s book and doesn’t like use of word “extremist” is.gd/dLyN4L

Wow! There’s a virtual lovefest in my twitter feed! Thank you for the birthday wishes, everyone. HB also to @bobdylan!

Couldn’t be prouder of my husband @jmartpolitico headed to the great @nytimes as National Political Correspondent !

Congrats to Jonathan Martin on his new role with the @nytimes!

I think @jmartpolitico should keep his handle as is, just to mess with the Times’ head.