How Bernie Sanders evolved from fringe candidate to contender

But the Vermont senator now also has the sheen of a contender.

He peppers audiences with his favorable poll numbers and describes what a “Sanders administration” might offer. He takes selfies along the rope line as David Bowie’s “Starman” blares over the loudspeakers and now weaves quips into his long-winded speeches.

“When we began this campaign, people said, ‘Well, it’s true Bernie combs his hair really nice. He is a fantastic dresser,'” Sanders dead-panned during a speech in Music Man Square in Mason City, Iowa. “But despite those realities, he is a fringe candidate! Who in America believes we should be taking on the billionaire class?”

Eight months into a once far-fetched campaign, the Democratic socialist has evolved into a more polished, more professional candidate, maintaining his candor in an election where authenticity is at a premium.

“People feel like they have a voice,” said Beth Heimerl, a teacher in suburban Minneapolis who attended a recent rally in St. Paul, Minnesota. “You can see yourself in the issues he’s talking about.”

His message of political revolution still draws big crowds – more than 14,000 people flocked to a recent event in St. Paul – but his Iowa events are more intimate and personal. He asks for names before people ask their questions and he surveys the crowd to find the person with the largest college debt or health care deductible, likening himself to a “Vermont auctioneer.” 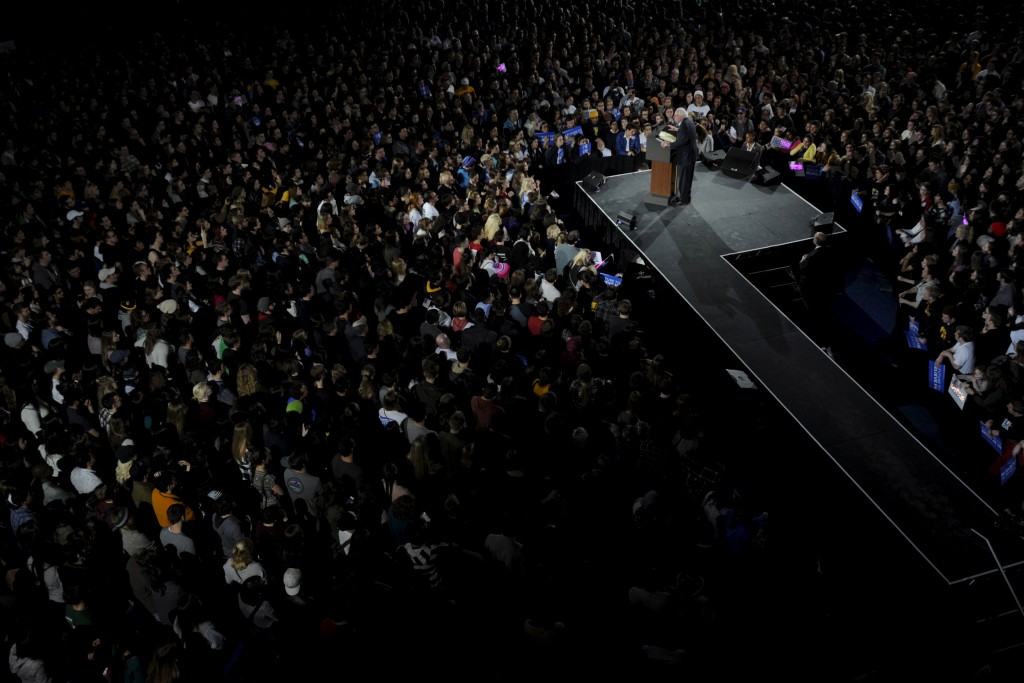 Sen. Bernie Sanders, shown here speaking at the University of Iowa January 30, 2016, has used a a message of political revolution that has drawn large crowds during his presidential bid.  Mark Kauzlarich/Reuters

Sanders hopes to drum up a large turnout among young voters in Iowa following the roadmap of then-Illinois Sen. Barack Obama, whose 2008 victory here put him on a path to the White House. Even Sanders’ blue signs – “A Future to Believe In” – recall Obama’s old “Change We Can Believe In” slogan.

Sanders rips into Republican Donald Trump at most stops. But he also copies from the billionaire’s playbook by rattling off poll numbers that he says show he’d be a tougher opponent against Trump than Democrat Hillary Clinton.

Sanders is also more willing to jab in Clinton’s direction, even while professing to be running a positive campaign.

He has all the trappings of a major candidate, too: a flush campaign bank account, a campaign bus and occasional rides on a chartered jet. Outside of events, vendors hawk his image on T-shirts, buttons and hats. Inside, a series of on-theme songs – Tracy Chapman’s “Talkin’ Bout a Revolution,” for instance – play before he takes the stage.

Known for a serious demeanor, Sanders has started showing more of a playful side. When MSNBC’s Andrea Mitchell asked him about releasing a doctor’s letter attesting to his “overall very good health,” Sanders clenched his fists and broke into a mock shadow boxing session. “Do I get involved in senior boxing – challenge, go for the light-heavyweight championship, or run for president?” he asked.

Sanders told The Associated Press that he’s “not always a grumpy old guy. I do have a sense of humor.”

Part of his appeal has been cultivated by comedian Larry David’s portrayal of Sanders on “Saturday Night Live” as a blunt, cranky politician screaming of revolution.

Actor Justin Long noted the similarities when he introduced Sanders in Des Moines this week.

“Neither Larry or Bernie are known for their flashy dress – sorry sir – or polished, slick appearance. Both men have had similar struggles with hair growth or loss. Both men speak with a similarly unfiltered tone, a cadence that suggests what they’re saying ‘NEEDS TO BE HEARD AT ALL COSTS EVEN IF IT’S JUST ABOUT A DELICIOUS PASTRAMI SANDWICH!'”

All of which helps make Sanders, 74, an unlikely draw with younger voters.