Joe Biden flipped the state of Arizona blue for the first time in decades, boosted in part by a large share of votes cast by Mexican Americans, according to AP’s VoteCast survey.

Overall, Latinos make up 23.6 percent of eligible voters in this border state, and a third of residents in Maricopa County — which accounts for 60 percent of Arizona’s vote — are Latino or Hispanic. Mexican Americans made up the vast majority of that election demographic, AP found, and 66 percent voted for Biden compared to 33 percent for President Donald Trump. 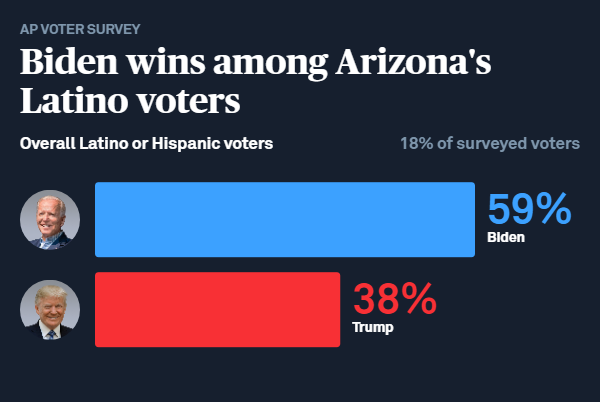 Trump campaigned in Arizona this spring to highlight his immigration policies and particularly his record on the border with Mexico, where his promised border wall has mostly materialized as reconstructed fencing and hundreds of miles of newly constructed barrier. Voters surveyed by the AP were split 49 to 50 on support for construction of the border wall, but two-thirds said they believed most immigrants living in the United States illegally should be offered a chance to apply for legal status. Sixty-seven percent of those respondents voted for Biden.

Arizona has been hard hit by the coronavirus, and more than 6,000 in the state have died from COVID-19. Concerns about the pandemic were reflected in the AP VoteCast data: 59 percent of voters said they believed it was more important for the federal government to prioritize limiting the spread of the virus even if it damages the economy, and 79 percent of these voters supported Biden.