MARICOPA COUNTY, ARIZONA — The first time Dominique Rivas voted for President Donald Trump, it was because her son Ray had joined the U.S. Army — “he was my son’s best chance of survival,” she said.

Four years later, Rivas believes Trump kept his promise to keep the U.S. out of foreign wars. But along with being the mother of a service member, she is now the owner of a small notary business, which has bumped her into a new tax bracket. As a single mother who once worked three jobs while going to school, she doesn’t want more taxes taken out of her paycheck, which she fears will happen if former Vice President Joe Biden wins the presidency. She also worries about how his pandemic response could affect her business.

Though Biden was slower than Trump to reach out to Latino voters in Arizona, he is maintaining a slight edge in overall support in the battleground state in the final days of the presidential race. But Trump, hoping to hold onto this historically red state’s 11 electoral votes, is still trying to gin up support from Latinos here, and he seems to have found an opportunity in the growing small business community. That includes voters like Rivas who say they value “hard work” over “handouts.”

“When [Trump] starts talking, it makes sense — he’s a businessman,” said Martha Llamas, who owns a janitorial company in Gilbert, Arizona, and points to business-friendly policies and its stance on gun rights as reasons she supports the Republican Party.

Latinos make up nearly a quarter of eligible voters in Arizona, but their political power has never been fully tapped. Historically, Latino participation in elections has lagged behind the general population. 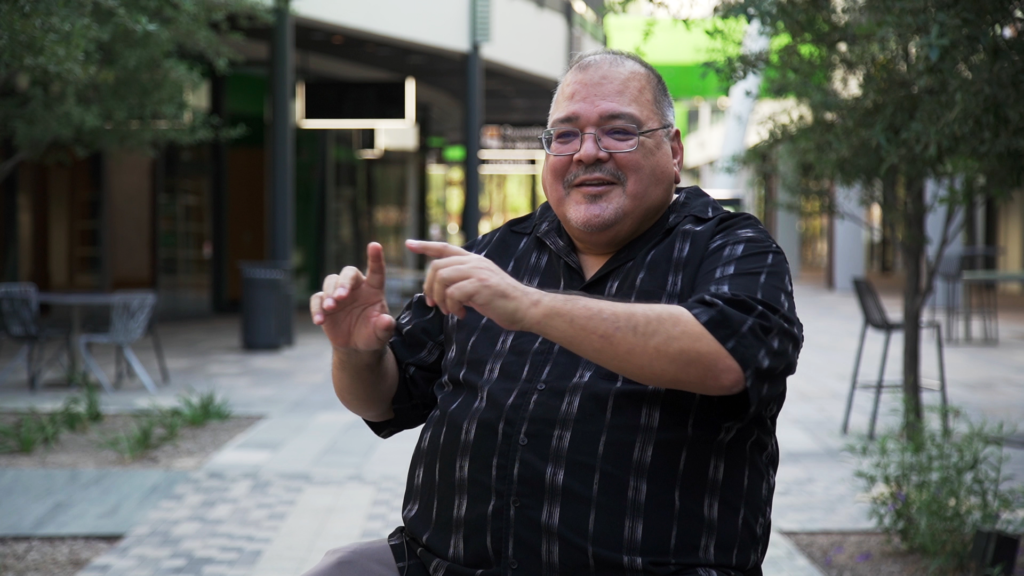 “I’ve kind of been the ‘Debbie Downer’ when it comes to the Latino vote turnout,” Garcia, the executive director of Chicanos Por La Causa Action Fund, said. While headlines in 2016 hailed Latino turnout, the data showed the rate of participation among Latinos was virtually unchanged from 2012, with less than 48 percent of those eligible casting a ballot.

But by late October, Garcia had changed his tune. He now is predicting a major uptick in turnout.

READ: Some Latino families see gender gap when it comes to voting

“I’ve seen a galvanized community like never before” he said. “More Latinos have turned 18 and are old enough to vote, but also I think there’s an understanding that Latinos can impact this election like never before.”

Both Biden and Trump have visited Arizona in the months leading up to the election, with the president making seven trips and holding large rallies. TV ads are flooding Arizona’s air waves, including a bilingual ad for Biden featuring Silvana Salcido Esparza, a prominent chef and restaurant owner in Phoenix who was one of the earliest to close her doors when the pandemic reached the U.S. last spring.

Esparza said she wanted to do her part to “flatten the curve.” She kept her kitchen partially open and served food to first responders and homeless people. But the loss in revenue forced her to cancel her own health insurance, she said, a potentially dangerous move for someone with sarcoidosis, an incurable inflammatory disease. She also had to shutter her other high-end restaurant completely. And while she was able to re-open Barrio Cafe at the end of the summer, she said she’s barely staying afloat.

“My business is like on a ventilator and the ventilator has power surge problems,” she said.

In an ad she shot for Biden’s campaign, Esparza says her business is struggling and COVID relief funds have dried up — “for what?” she implores. “So Donald Trump can bail out million-dollar companies?”

Biden and his running mate, Sen. Kamala Harris, D-Calif., visited Esparza at the Barrio Cafe in October. Esparza says what was scheduled as a five-minute time slot with the former vice president turned into an almost hour-long heart-to-heart during which she saw Biden tear up while talking about how his faith got him through the loss of his beloved son Beau.

“I see a soul there,” she said.  “I see a man who has got conviction, who has empathy, who listens.”

A few miles away, 35-year-old Chawa Magaña packs online orders at Palabras bilingual bookstore, which she opened five years ago in a predominantly Latino commercial area of Phoenix. Community grants and an online fundraising campaign that raised more than $10,000 have helped sustain the store, which Magaña envisioned as a community space bridging the language gap between generations of Latinos. 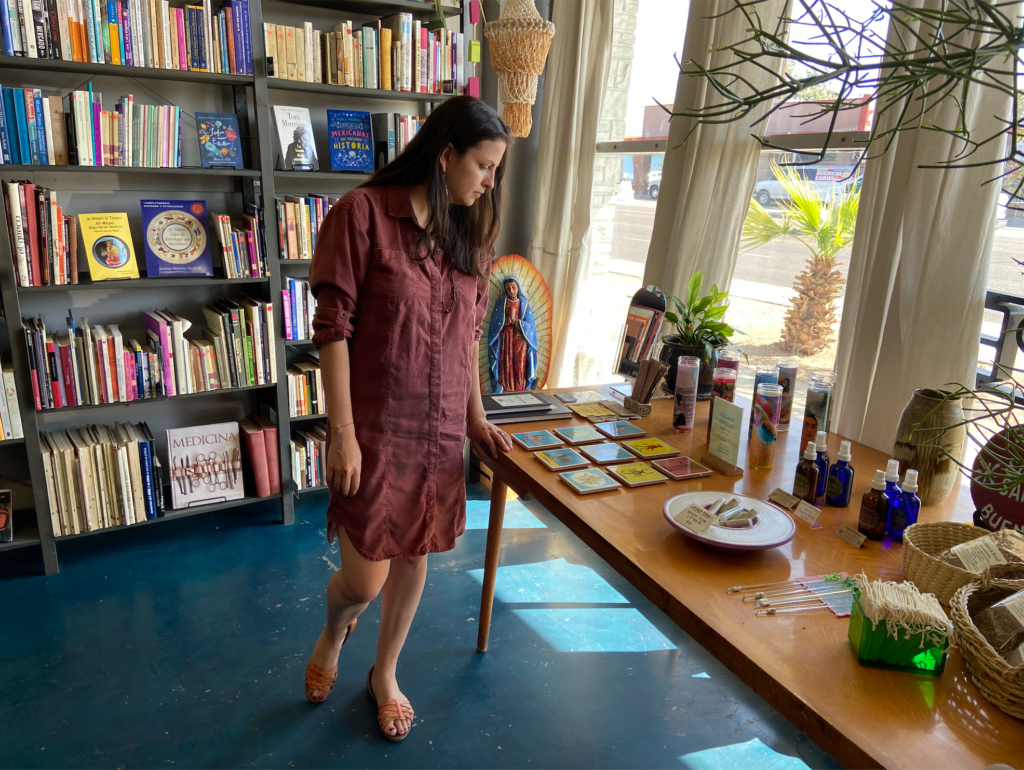 Chawa Magaña is is the owner of Palabras bilingual bookstore, pictured here Oct. 21. She opened the store five years ago in a predominantly Latino commercial area of Phoenix. Photo by Casey Kuhn for the PBS NewsHour.

“I am driven by a mission that isn’t just profit,” said Magaña. “I need money in order to exist…but that’s not the main focus of the bookstore.”

Magaña blames the Trump administration for sending confusing and politicized messages about mask-wearing and the severity of COVID-19, which has disproportionately affected Latino communities. Latinos make up 29 percent of Arizona’s population, but 36 percent of hospitalizations from the coronavirus.

READ MORE: COVID-19 deaths are rising again in the U.S., as experts feared

“We can’t just see the bottom line all the time,” she said. “We have to think about the health and well-being of our community first.”

Magaña is disillusioned with the two-party system, she said, a colorful mural of sci-fi author Octavia Butler behind her bearing the quote: “the only lasting truth is change.” Magaña supported Sen. Bernie Sanders, I-Vt., in the primary, but she had no hesitation sending in a mail-in ballot for Biden. “What is the other option?” she asked.

Other business owners feel the same way — not only because of the president’s handling of the pandemic, but because of his stance on other issues that hit close to home. Esparza of Barrio Cafe recalls four years ago when then-candidate Trump said he could get away with shooting somebody on Fifth Avenue, and was heard on recordings saying he’d grabbed women by their private parts. She could have looked past those things, dismissing them as “bravado,” she said, but as a gay woman, she felt personally offended by his administration’s actions against LGBTQ rights.

Llamas sees things differently. She shared her account of a horrific incident in 1996 when she was shot by her boyfriend and left bleeding out in front of her children. Her mother, too, was a victim of abuse, and fled Mexico to get away from her husband. Both women learned to be self-reliant. Llamas said her mother told her: “Don’t get any handouts. Go get a job.”

That job ended up being as a janitor. Llamas used her Spanish language skills to help her boss communicate with his other employees, and eventually rose through the ranks to become a manager. While cleaning an office one day she met the man who would later become her husband. With his help, Llamas was able to buy the franchise of the Jani-King cleaning service where she worked. 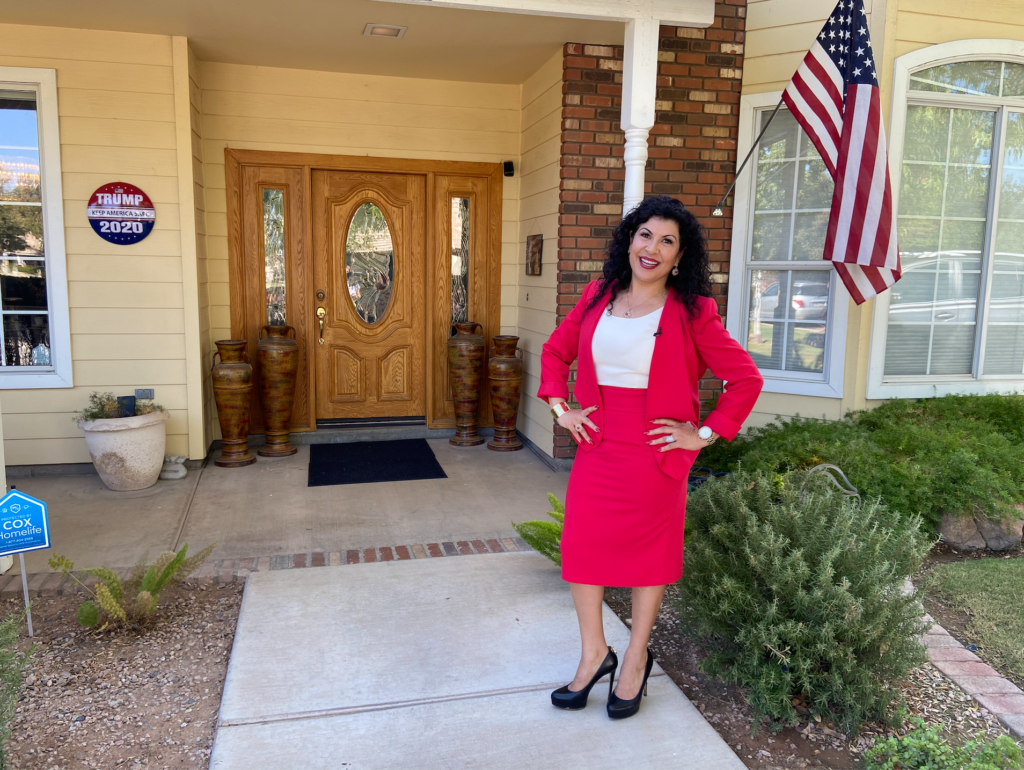 Martha Llamas stands outside her home Oct. 22 in the East Valley, Arizona. Llamas, who owns a cleaning business in the Phoenix area, says she relates to Trump because, like her, “he’s a fighter.” Photo by Casey Kuhn for the PBS NewsHour.

Llamas credits that experience — her path out of violence, gangs and poverty into her realization of “The American Dream — as having led her to conservative activism.

Llamas recounted her story to Trump during a roundtable for Latino small business owners in mid-September. In 2016, she supported Texas Sen. Ted Cruz for the GOP presidential nomination, but she says she relates to Trump because, like her, “he’s a fighter.”

When Llamas is not running her company, she helps Latinos understand the process of becoming a U.S. citizen. Immigration is an area where her support for Trump’s policies is more nuanced. While she said she believes immigrants should go through legal channels to come to the U.S. and that Trump hasn’t been given enough credit for what she sees “behind the scenes,” she opposed his administration’s policy of separating children from their families at the southern border. However, she pointed out that the Obama administration had also been responsible for some family separations. Llamas said as a domestic abuse survivor, she believes women and children should have a special path to legally immigrate to the U.S.

Rivas, the notary in Mesa, said that she meets many non-white voters through her business that are quietly voting for Trump. Her mother, Cecilia Trujillo, doesn’t understand why. A Democrat and a Biden supporter, she joked that her daughter “must have been dropped on her head.” For her part, Trujillo said she couldn’t vote for “someone so mean, a bully.” She mentioned that a family member, the postmaster of Phoenix, died of COVID-19 during a spike in cases in July. 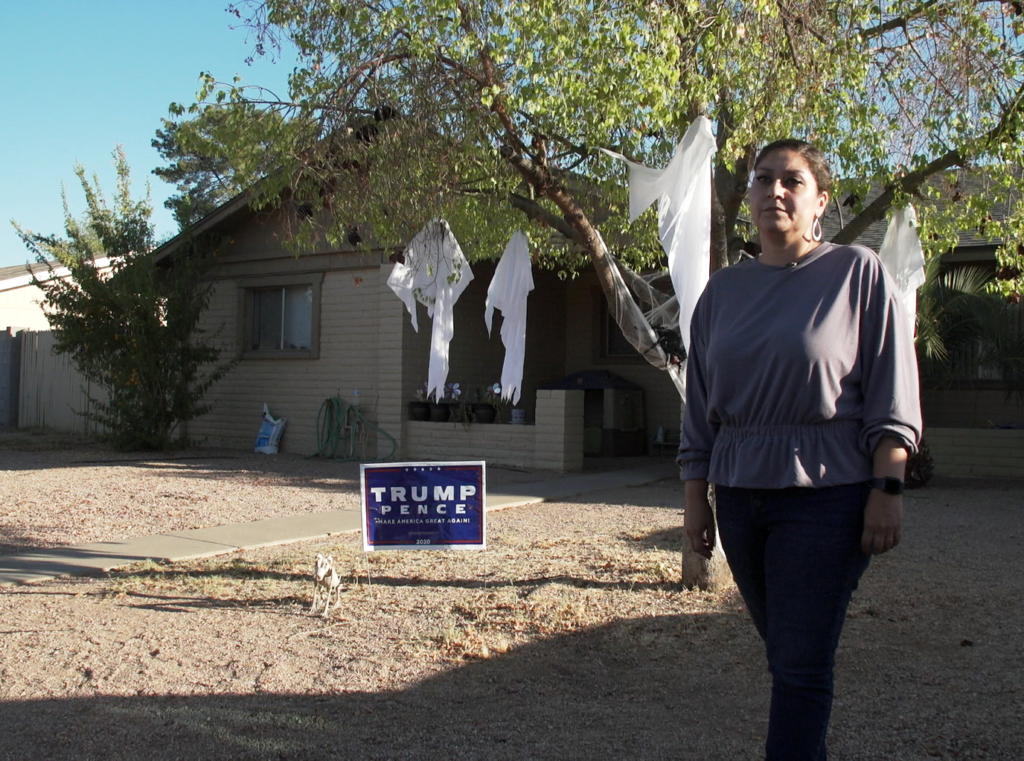 Dominique Rivas, seen here Oct. 22, voted for Donald Trump in 2016 because her son had joined the Army and she believed Trump would keep the U.S. out of foreign wars and keep her son safe. Now she has her own small business and believes Trump’s reelection is important to its survival, as well. Screen shot by the PBS NewsHour.

Rivas said she doesn’t blame Trump for the death of her great uncle. It has been hard to get the oldest and youngest members of her family to wear a mask and take precautions, she said. Rivas does wear a mask in public, and dismissed Trump’s rhetoric as “high school” and “dumb.” But it hasn’t caused her support to waver.

“It’s about policy,” she said.  “It’s about what affects my life, and what he says doesn’t affect my life.”

Left: Silvana Salcido Esparza is the owner and chef of Barrio Cafe in Phoenix. Her business, pictured here on Oct. 21, has been hit hard by the pandemic, forcing her to close her other more high-end restaurant and to cancel her health insurance despite a preexisting condition. Photo by Stephanie Sy for the PBS NewsHour.