How past presidents celebrated the Fourth of July

WASHINGTON (AP) — Through history, the Fourth of July has been a day for some presidents to declare their independence from the public. They’ve made tracks to the beach, the mountains, the golf course, the farm, the ranch. In the middle of the Depression, Franklin Roosevelt was sailing to a Hawaii vacation.

It’s also been a day for some presidents to insert themselves front and center in the fabric of it all, as Donald Trump planned to do Thursday with his speechifying and showmanship. Teddy Roosevelt drew crowds in the hundreds of thousands for his oratory and Richard Nixon enraged the anti-war masses without even showing up.

Independence Day in the capital isn’t always just fun and games. It has a tradition of red, white and boo, too.

In modern times, though, presidents have tended to stand back and let the people party. George W. Bush had a ceremony welcoming immigrants as new citizens. Barack Obama threw a South Lawn barbecue for troops. Trump’s plan to command center stage with his words and American military might has the capital cleaving along political lines.

As the anti-Nixon demonstrations of 1970 showed, Independence Day in the capital isn’t always just fun and games. It has a tradition of red, white and boo, too.

With protesters making their presence felt Thursday, it is as American as the cherries and milk that apparently soured President Zachary Taylor’s gut when he wolfed them down July 4, 1850, and died five days later.

A look at what some presidents have done on the Fourth of July:

1777: On the first anniversary of the Declaration of Independence, with the Revolutionary War underway, future president John Adams describes a day and night of spontaneous celebration in Philadelphia in a letter to his wife, Abigail. After hours of parading troops, fireworks, bonfires and music, he tells her he strolled alone in the dark.

“I was walking about the streets for a little fresh air and exercise,” he writes, “and was surprised to find the whole city lighting up their candles at the windows. I walked most of the evening, and I think it was the most splendid illumination I ever saw; a few surly houses were dark; but the lights were very universal. Considering the lateness of the design and the suddenness of the execution, I was amazed at the universal joy and alacrity that was discovered, and at the brilliancy and splendour of every part of this joyful exhibition. ” 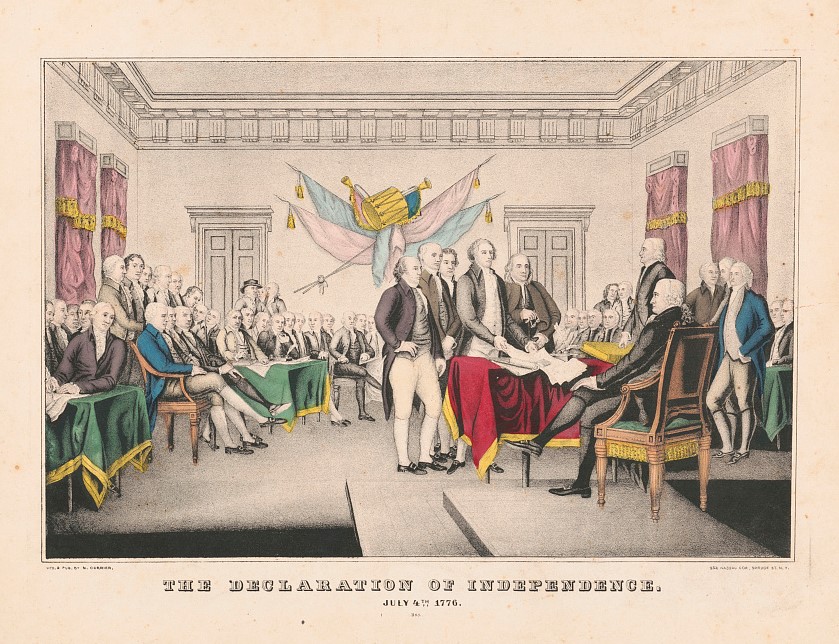 Courtesy the Library of Congress

1791: Two years after becoming the first president, George Washington celebrates in Lancaster, Pennsylvania, “with an address, fine cuisine, and walking about town,” says the National Park Service . Philadelphia was the interim capital as Washington, D.C., was being readied; Lancaster had hosted the Continental Congress for a quick, on-the-run session during the revolution.

1801: Thomas Jefferson presides over the first Fourth of July public reception at the White House.

1822: James Monroe hangs out at his farm in Virginia.

1826: Adams, the second president, and Jefferson, the third, both die on this July 4.

1848: James Polk witnesses the laying of the cornerstone of the Washington Monument with Abraham Lincoln, then an Illinois congressman, attending. A military parade follows.

1850: Taylor attends festivities at the grounds of the Washington Monument and falls ill with stomach cramps after eating cherries and drinking iced milk and water. He dies July 9. A theory that someone poisoned him with arsenic was debunked in 1991 when his body was exhumed and tested.

1861: Abraham Lincoln sends a message to Congress defending his invocation of war powers, appealing for more troops to fight the South and assailing Virginia for allowing “this giant insurrection to make its nest within her borders.” He vows to “go forward without fear.”

1868: Postwar, Andrew Johnson executes a proclamation granting amnesty to those who fought for the Confederacy.

1902: Teddy Roosevelt speaks to 200,000 people in Pittsburgh. He liked to get in people’s faces on the holiday.

1914: “Our country, right or wrong,” Woodrow Wilson declares at Independence Hall in Philadelphia. 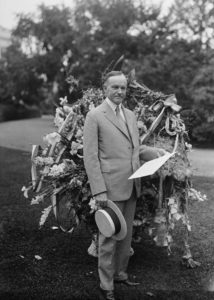 1930: Herbert Hoover vacations by the Rapidan River in Virginia.

1934: Franklin Roosevelt is in or near the Bahamas after leaving Annapolis, Maryland, on a monthlong voyage and visit to Hawaii via the Panama Canal. On July 4, the U.S.S. Houston’s log refers to the “fishing party” leaving the ship for part of the day.

1951: With the U.S. at war in Korea, Truman addresses a huge crowd at the Washington Monument grounds, marking the 175th anniversary of the signing of the Declaration of Independence.

1968: Lyndon Johnson, who favored his Texas ranch on the holiday, speaks in San Antonio about the lack of independence for the poor, minorities, the ill, people “who must breathe polluted air” and those who live in fear of crime, “despite our Fourth of July rhetoric.”

1970: Nixon, in California, tapes a message that is played to crowds on the National Mall at an “Honor America Day” celebration organized by supporters and hotly protested by anti-war masses and civil rights activists. Tear gas overcomes protesters and celebrants alike, Viet Cong flags mingle with the Stars and Stripes, and demonstrators plunge into the reflecting pool, some naked.

1976: As the U.S. turns 200, Gerald Ford speaks at Valley Forge, Pennsylvania, then Independence Hall, and reviews the armada of tall ships in New York harbor.

1987: Ronald Reagan, at Camp David, makes a straight political statement in his July 4 radio address, pitching an economic “bill of rights” and Robert Bork for the Supreme Court. On a Saturday, it served as his weekly radio address, which he and other modern presidents used for their agendas.

2008: Bush, like several presidents before him, hosts a naturalization ceremony. More than 70 people from 30 countries are embraced as new citizens. 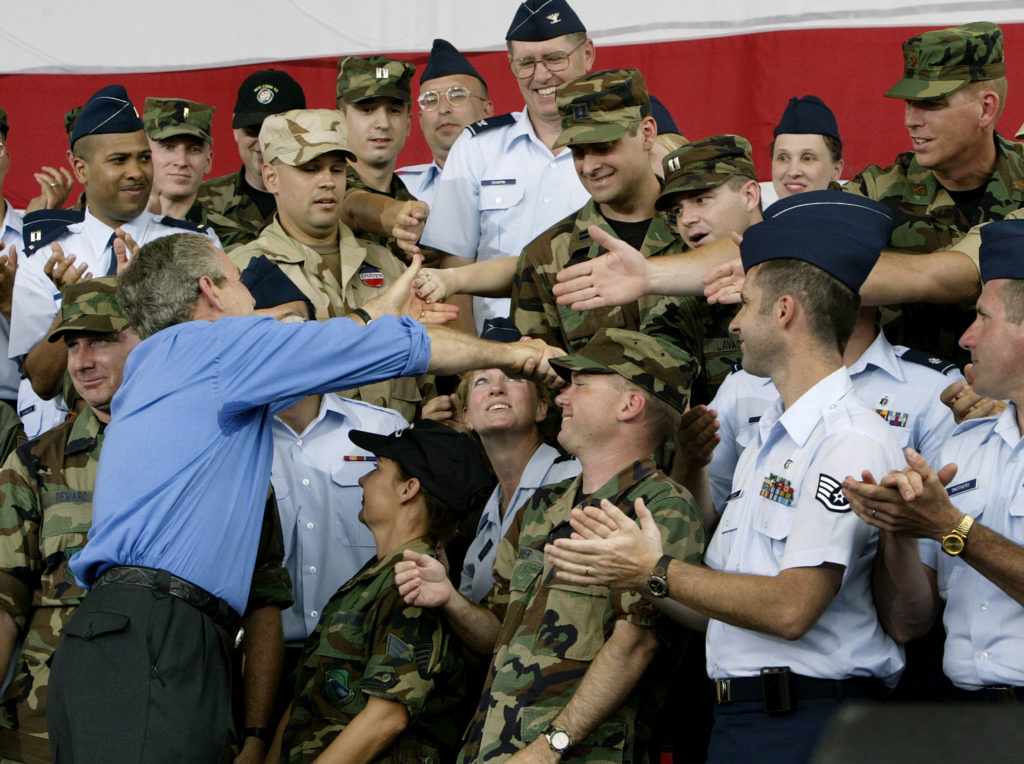 2010: Barack Obama brings 1,200 service members to the South Lawn for a barbecue. The father of a July 4 baby, Malia, he would joke that she always thought the capital fireworks were for her.

2012: Obama combines two Fourth of July traditions — celebrating troops and new citizens — by honoring the naturalization of U.S. military members who came to the country as immigrants.

2017: Trump goes to his golf club, then hosts a White House picnic for military families.

2018: Another White House picnic for military families, with thousands also invited to see the fireworks.

Left: Fireworks explode in celebration of Independence Day in Washington near the White House in 2010. Photo by REUTERS/Hyungwon Kang