WASHINGTON (AP) — A reality TV host at heart, President Donald Trump is promising the “show of a lifetime” for the hundreds of thousands of revelers who flock to the National Mall every year on the Fourth of July. The tanks are in place for the display of military muscle, and protesters are ready to make their voices heard.

It’s been nearly seven decades since a president spoke there on Independence Day. The U.S. was at war in Korea when Harry Truman addressed a large gathering on the Washington Monument grounds, marking the 175th anniversary of the signing of the Declaration of Independence.

There’s no such historical marker Thursday for Trump, who for the past two years has sought a moment to orchestrate a display of America’s military prowess.

He’s calling his event a “Salute to America,” honoring the armed forces, and he’ll speak at the Lincoln Memorial in front of a ticket-only, VIP crowd of Republican donors, administration and campaign officials, family members and those who flock to see him or protest what they see as a divisive intrusion on a traditionally unifying national holiday.

Trump sounded a defensive note Wednesday, tweeting that cost “will be very little compared to what it is worth.”

“We own the planes, we have the pilots, the airport is right next door (Andrews), all we need is the fuel,” he said, referring to Maryland’s Joint Base Andrews, home for some of the planes that are to fly over the Mall on Thursday. “We own the tanks and all. Fireworks are donated by two of the greats.”

The cost of our great Salute to America tomorrow will be very little compared to what it is worth. We own the planes, we have the pilots, the airport is right next door (Andrews), all we need is the fuel. We own the tanks and all. Fireworks are donated by two of the greats. Nice!

Trump glossed over the expense of shipping tanks and fighting vehicles to Washington by rail and guarding them for several days, and other costs.

Some of the president’s supporters welcomed Trump’s stamp on the holiday.

Rachel McKenna, a Trump supporter from McKinney, Texas, said her relatives have served in the military and she thought it was important to say “‘We love you guys, we appreciate everything you do,’ and I love the fact I can see that,” as she pointed to the Bradley fighting vehicle positioned near the Lincoln Memorial.

Under White House direction, the Pentagon was arranging for an Air Force B-2 stealth bomber and other warplanes to conduct flyovers. There will be Navy F-35 and F-18 fighter jets, the Navy Blue Angels aerobatics team, Army and Coast Guard helicopters and Marine V-22 Ospreys. 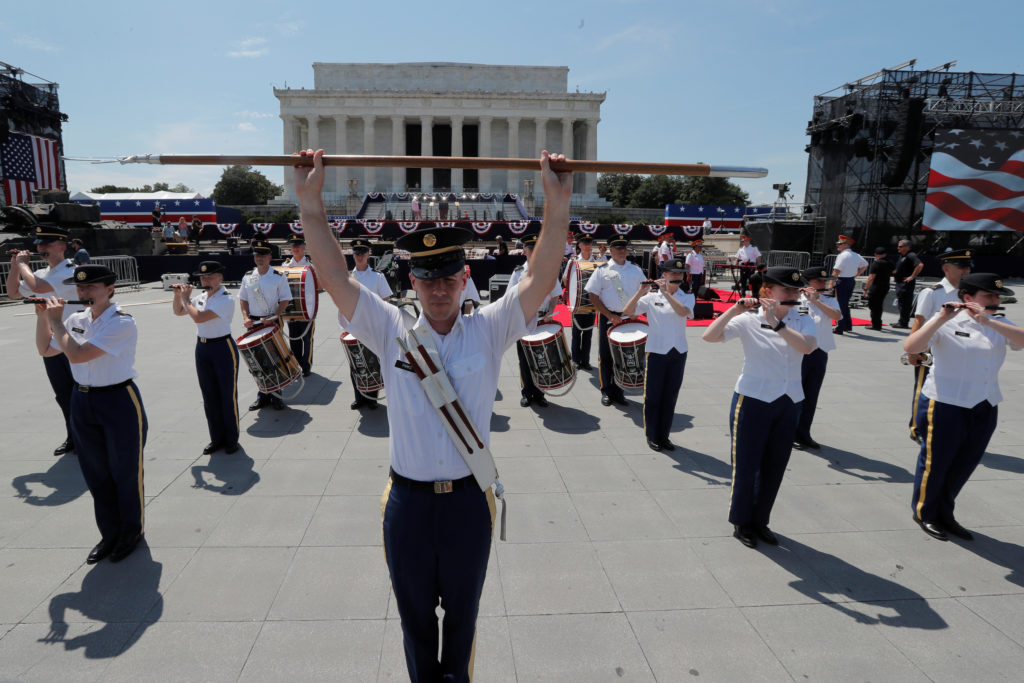 Members of a U.S. military band rehearse as preparations continue for U.S. President Donald Trump’s Fourth of July speech at the Lincoln Memorial in Washington, on July 3, 2019. Photo by Jim Bourg/Reuters

The White House referred questions about the cost of the military participation to the Pentagon, which said it did not have the answer.

The Air Force said it costs $122,311 an hour to fly a B-2 bomber, which is making the round trip from its home at Whiteman Air Force Base in Missouri. Officials said the flight will be considered a training event, with the cost already budgeted. The per-hour flying cost of the F-22 fighter is $65,128.

Two Bradley fighting vehicles were in place Wednesday at the Lincoln Memorial, where Trump will speak. In addition, two 60-ton Army Abrams battle tanks were sent to Washington by rail to be positioned on or near the National Mall, to the dismay of District of Columbia officials.

The presidential Air Force One and Marine One aircraft are also slated to make aerial appearances.

Kevin Donahue, District of Columbia deputy mayor for public safety, told The Associated Press the city expects the federal government to pay for any damage to streets or bridges from moving the tanks. Civil engineers will assess roads and bridges after July 4 to determine if there’s been damage.

Donahue said the city doesn’t have the jurisdiction to reject the use of tanks and other heavy equipment.

In a separate tweet Wednesday, Trump promised the Lincoln Memorial program “will be the show of a lifetime!” White House officials have stressed that Trump’s remarks will be patriotic, but the president often finds it difficult to stay on any kind of script.

But Tracie Lenihan of Spokane, Washington, an independent, said she didn’t understand why military equipment is part of the festivities. “I think it cost a lot of money and I’m not sure what it really has to do with the Fourth of July,” she said. “I don’t hate it. I’m just confused.”

“We want it to be a holiday where people are having their picnics and they’re watching their fireworks and it’s all peaceful and united,” she said.

Instead, her group will be fielding a balloon depicting Trump as an angry, diaper-clad baby. But because of flight restrictions, officials would not let the group pump it with helium to make it fly higher and be more visible.

WATCH LIVE: Trump speaks at ‘Salute to America’ for 4th of July

Rep. Betty McCollum, D-Minn., who is among lawmakers overseeing the Interior Department, which has jurisdiction over the National Mall and federal parks, said it was “absolutely outrageous” that the administration will use park money to help defray Thursday’s event costs. The National Park Service plans to use nearly $2.5 million intended to help improve parks nationwide, The Washington Post reported late Tuesday, citing anonymous sources.

“These fees are not a slush fund for this administration to use at will,” McCollum said in a statement. She promised a congressional hearing.

Trump and the event’s organizers could be on the hook to reimburse the government millions of dollars if he goes into campaign mode, in violation of federal appropriations law and the Hatch Act, which bars politicking on government time, said Walter Shaub, who left the Office of Government Ethics in 2017 after clashing with the White House over ethics and disclosure issues.

“There’s not a history of disciplined speaking engagements where he sticks to a script,” Shaub said of Trump. 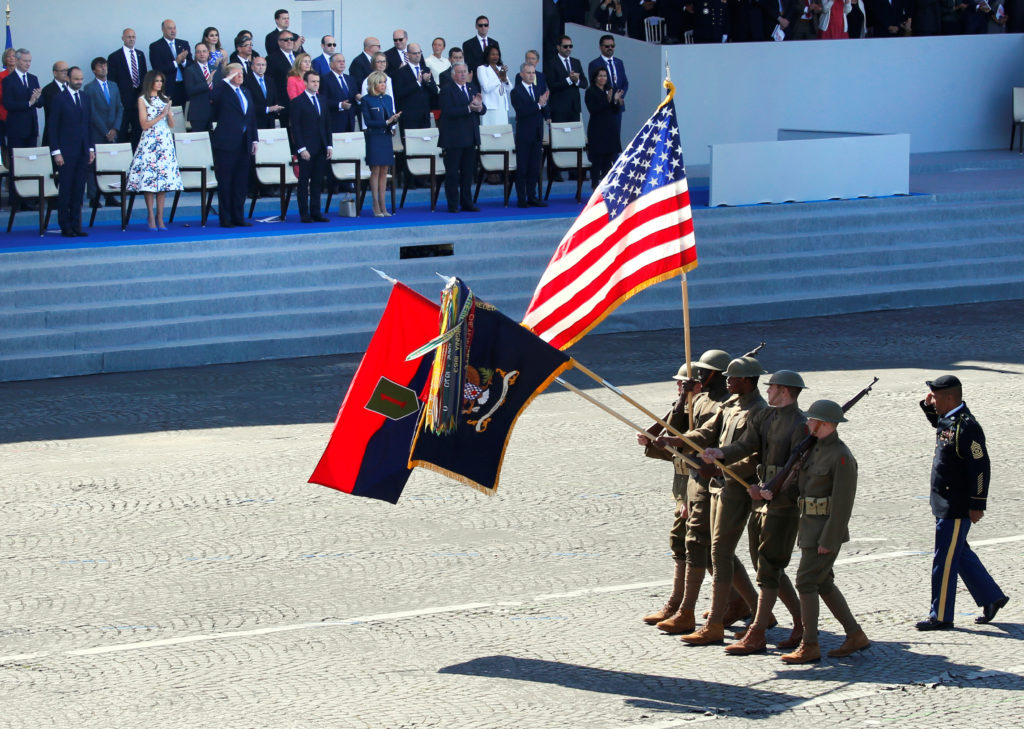 Later that year Trump said he’d have a similar parade in Washington on the Fourth of July, 2018, and would “top” the Paris show. The event ended up being pushed to Veterans Day, which conflicted with one of Trump’s trips abroad, before it was scuttled after cost estimates exceeding $90 million were made public.

In February, Trump tweeted for the public to “HOLD THE DATE!” for this Fourth of July.

HOLD THE DATE! We will be having one of the biggest gatherings in the history of Washington, D.C., on July 4th. It will be called “A Salute To America” and will be held at the Lincoln Memorial. Major fireworks display, entertainment and an address by your favorite President, me!

Washington has held an Independence Day celebration for decades, featuring a parade along Constitution Avenue, a concert on the Capitol lawn with music by the National Symphony Orchestra and fireworks beginning at dusk near the Washington Monument.

Trump altered the lineup by adding his speech, moving the fireworks closer to the Lincoln Memorial and summoning the tanks and warplanes.

Left: Members of the U.S. Army's 3rd Infantry Division, 1st Battalion, 64th Armored Regiment based at Fort Stewart, Georgia assist as a Bradley Fighting Vehicle is moved into place at the Lincoln Memorial ahead of a July Fourth celebration highlighting U.S. military might in Washington. Photo taken July 3, 2019. Photo by Jim Bourg/Reuters