President Donald Trump’s message to Black voters in 2016 was characteristically blunt. “What do you have to lose,” he liked to ask, by voting for a Republican after years of broken promises from the Democratic Party?

Eight percent of Black voters supported Trump in 2016, more than supported the Republican nominees who ran against President Barack Obama in 2008 and 2012, but less than backed President George W. Bush in 2004.

The Trump campaign entered 2020 hoping to boost the president’s support among Black voters. But the campaign’s plans for a more robust approach than the one Trump took four years ago have been complicated by the president’s struggle to respond to nationwide protests over racial injustice and a pandemic that is disproportionately affecting people of color.

Sean Jackson, the chairman of the Black Republican Caucus of Florida, said the way Trump has handled both crises have made it harder for him to convince conservative Black voters in his state to ignore Trump’s rhetoric and focus on his policies.

Before the protests started, “folks were starting to get to the point of saying we think you may be right, we’ll start ignoring the stupidity and the jibber jabber that comes out of the White House,” Jackson said. “The little inroads that I made all washed away instantaneously.”

“If [Black voters] saw him handle this situation in a manner that was more sensitive to the raw emotions of Black America, they probably would be willing to come to his defense much more,” Jackson said.

Both Republicans and Democrats are building outreach campaigns around Black voters in the wake of the 2016 election. That year, overall Black turnout dropped 7 percentage points from 2012, the biggest drop in decades; 1.6 million Black voters who had backed Obama in 2012 did not vote in 2016, a deciding factor in Democratic nominee Hillary Clinton’s losses in battleground states like Wisconsin and Michigan. Trump will need to win those states and other key swing states to win reelection.

Last year, months before the pandemic and protests, Trump’s 2020 reelection campaign launched a program focused on increasing Black turnout, called Black Voices for Trump. A similar effort did not exist in 2016, said Katrina Pierson, a senior campaign adviser who served as Trump’s national spokesperson during his first presidential run.

“There was nothing nearly as organized and as structured as we have today, mainly because the president was funding his own campaign at the beginning” of his 2016 run and didn’t have the resources to target specific voting groups, Pierson said. 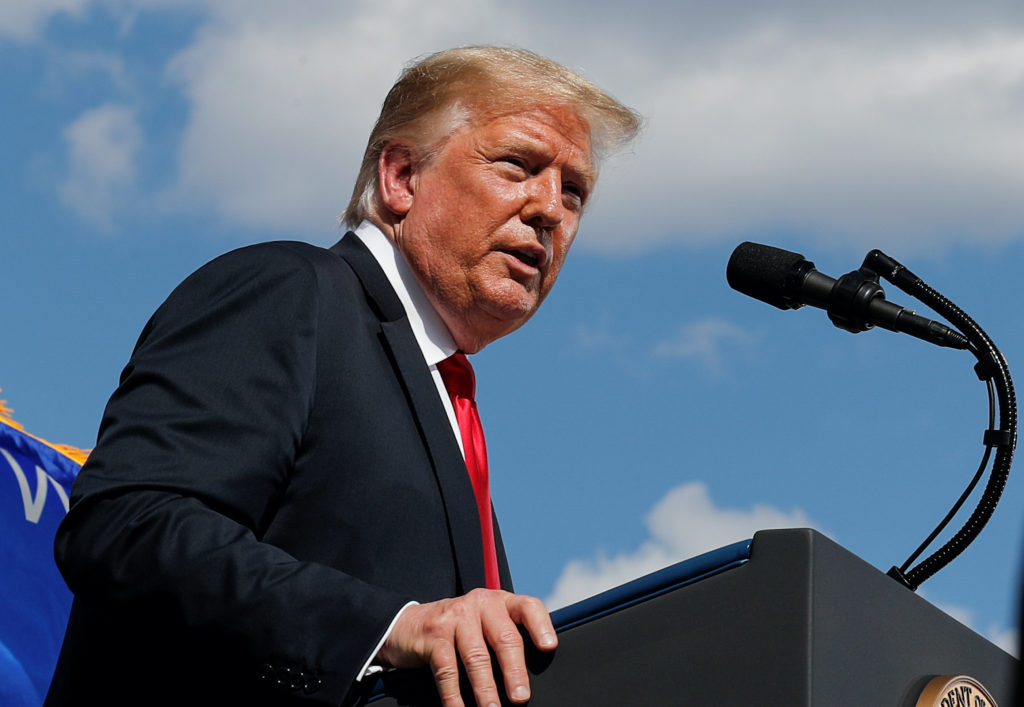 The campaign has centered its pitch around Trump’s support for historically Black colleges and universities; the criminal justice reform bill that Congress passed and he signed last year; and the once-record low unemployment rate among Black Americans reached just before the pandemic that Trump has cited as proof economic conditions have improved under his watch.

Opportunity Zones, the federal program created under the 2017 tax overhaul with the goal of boosting investment in low-income communities, has also figured prominently in campaign messaging to communities of color. However, a recent study found that the tax break has done little to help small businesses or create jobs and has disproportionately helped real estate projects.

In February, the campaign announced plans to open 15 offices focused on courting Black voters in cities in battleground states, including Florida, Ohio, Wisconsin and Michigan.

The campaign declined to say how many of the offices were up and running, either in person or virtually through online organizing, but campaign work in at least some of the cities seems to be underway.

READ MORE: Can Biden win over Black voters who Clinton lost in 2016?

The Michigan Republican Party is opening an office in Detroit this month that will focus on outreach to Black voters, a GOP official said. The state party and Trump campaign will operate jointly out of the space.

In Wisconsin, Black Voices for Trump has held events in recent weeks at an office the state GOP opened in a predominantly black neighborhood in Milwaukee.

“It’s the first Republican office in the heart of Milwaukee in a very long time,” said Khenzer Senat, the director of Black voter outreach for the Wisconsin Republican Party. Senat said the state party was coordinating its efforts with the Trump campaign. “We want to make a concerted effort to reach out to all voters, so no stones are unturned.”

Nationally, Black Voices for Trump has a team of 34 members dedicated to producing “Real Talks” — roundtable discussions with Black community leaders — and other events aimed at increasing support for Trump, the campaign said.

The group also runs targeted ads on Facebook and Instagram that the campaign is hoping will inspire Black voters to get involved in get-out-the-vote efforts for Trump this fall.

“Black Americans have no greater advocate than President Trump and this Administration,” Harrison Floyd, executive director of Black Voices for Trump, said in a statement to PBS NewsHour. “For decades, Democrats had made empty promises to the Black community and reaped the benefits of the Black vote without delivering on their words.” 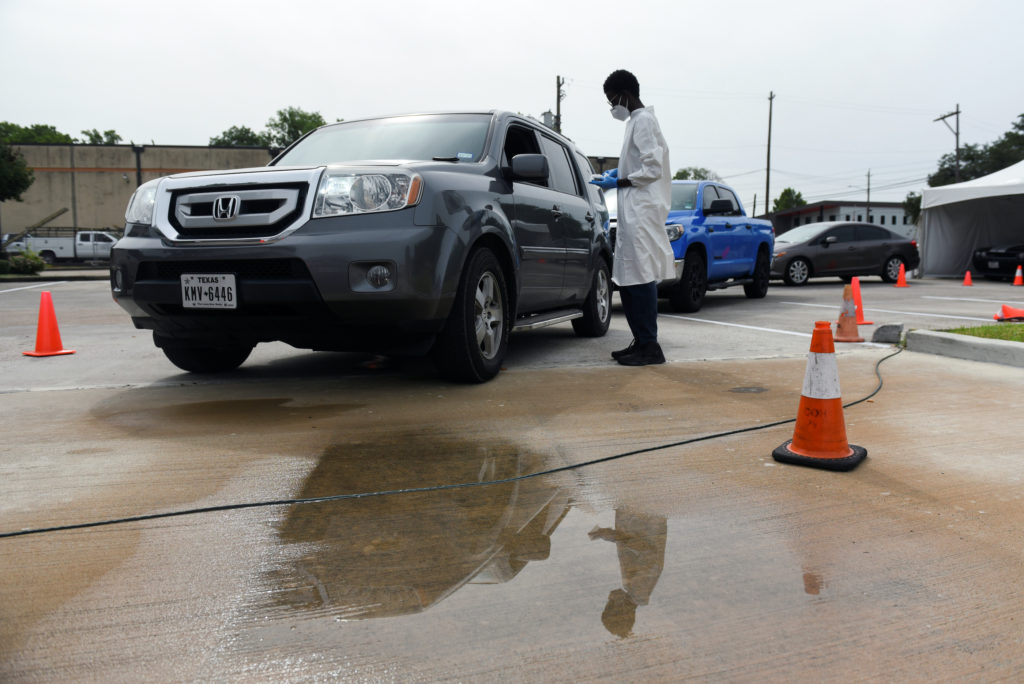 The Trump campaign’s outreach to Black voters has been been complicated by the president’s struggle to respond to nationwide protests over racial injustice and a pandemic that is disproportionately affecting people of color. File photo REUTERS/Callaghan O’Hare

The Trump campaign’s messaging so far hasn’t translated to support from Black voters in the polls. With four months left before the election, polls show former Vice President Joe Biden, the presumptive Democratic nominee, has a significant lead over Trump with Black voters. If the election were held now, 91 percent of Black adults would vote for Biden, according to a recent PBS NewsHour/NPR/Marist poll, compared to just 5 percent support for Trump.

The accomplishments Trump’s campaign touts are also the topic of some debate. Funding for HBCUs has increased since he took office, but some of it has come in the form of loans that educators have noted must be repaid, and many credit Congress, not the Trump administration, for the increased financial support.

Recently the campaign’s message has been muddled by Trump’s own rhetoric on race, especially since late May, when George Floyd, a Black man, was killed by police in Minneapolis.

The president has condemned Floyd’s death but has criticized the protests against racial injustice that began afterwards, largely avoiding acknowledgement of systemic racism while praising law enforcement. Trump called for an aggressive crackdown to end the protests, at times using law-and-order language that many perceived as racist.

Last month, Trump was forced to delay a campaign rally in Tulsa, Oklahoma, after drawing heavy criticism for initially planning to hold it on Juneteenth, the holiday commemorating the end of slavery, which he claimed “nobody had ever heard of” before he made it “very famous.”

On June 28, Trump retweeted a video of a supporter yelling “white power” during a confrontation with protesters in Florida. The White House said the president had not heard the remark in the video before sharing it on Twitter. The message was later taken down.

Trump stoked further division on Monday when he blamed Black NASCAR driver Bubba Wallace for a “hoax” — apparently referring to the noose found in his garage, which was reported by a team member, not Wallace, and which an investigation found to have been in the garage since last year. In the same tweet, Trump also slammed NASCAR’s decision to ban the Confederate Flag at races.

Critics said Trump’s insensitivity on matters of race is nothing new and is part of a broader pattern of racist language and behavior that predates his entry into politics.

“He race-baits often. He lacks sensitivity and respect for African American perspectives, concerns, and feelings,” said Clarence Mingo, who is Black and a former Republican county official in Ohio.

Mingo did not endorse Trump in 2016 and said he is now giving serious thought to voting for Biden in 2020. “I believe he has set Republican relations with the African American community back 40 years,” he said of Trump. “It will likely take an entire generation for us to recover.” 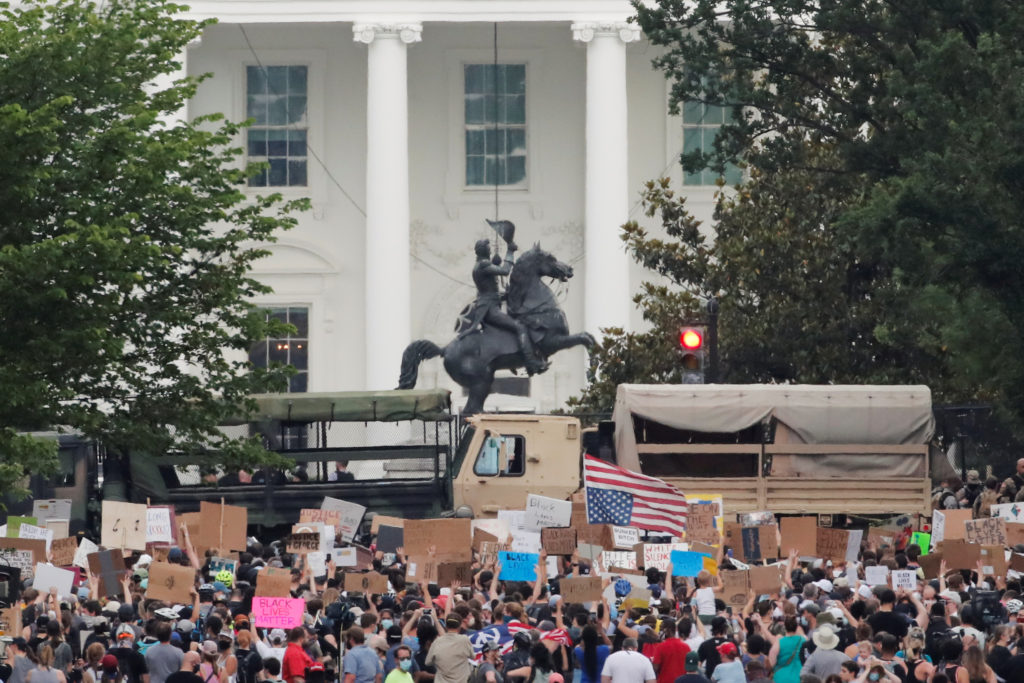 People attend a protest near the White House in Washington, on June 3, 2020. File Photo by Carlos Barria/ Reuters.

It can also be a challenge to defend Trump’s claims of economic progress when they clash with the day-to-day realities for many Black Americans, said Jackson of the Black Republican Caucus of Florida. “He’s right that Black unemployment is the lowest, but all that means is that more Black people might have a job at McDonald’s. It doesn’t mean they’re able to walk into JP Morgan Chase and become a senior manager,” he said.

Prominent Black allies of Trump insist the president still has time to turn things around with Black voters ahead of the general election in November.

Ken Blackwell, a former secretary of state in Ohio who sat on Trump’s voter fraud commission, said he has counseled senior White House advisers on the need for the president to tweak his language around policing.

The president should not entirely abandon his law and order rhetoric, but he would benefit by sometimes using other “terms, like the rule of law and public safety,” said Blackwell, who discussed race and policing in a meeting at the White House earlier this month. “It’s just a blending of language that will allow him not only to energize his base, but to expand his messaging.”

Around the Trump campaign, there’s disagreement about how much support the president can realistically count on from Black voters at the polls.

Some supporters believe it remains possible Trump could win 10 percent or more of Black votes. Senat, the Wisconsin Republican official, said he believed Trump could potentially top the 11 percent total that Bush won in 2004.

Pierson, the senior campaign adviser, did not reveal what number, if any, the campaign has in mind for Black turnout this fall. “I anticipate having a strong showing with Black voters,” she said. “In 2016 President Trump asked black voters what do you have to lose. We’re going to go out there and show Black voters specifically what the president has delivered.”

Left: Governor Kevin Stitt claps among "Black Voices for Trump" supporters as President Donald Trump speaks during a campaign rally at the BOK Center on June 20, 2020 in Tulsa, Oklahoma. (Photo by NICHOLAS KAMM/AFP via Getty Images)