In recent days, President Donald Trump’s disapproval rating has risen higher than at any other point during his presidency, according to the latest PBS NewsHour/NPR/Marist poll.

Americans’ disapproval of Trump is higher than that of Presidents Barack Obama or George W. Bush at similar points in their administrations, who were at 47 percent and 48 percent among registered voters, respectively, in July of their reelection years, according to Marist’s polling data. 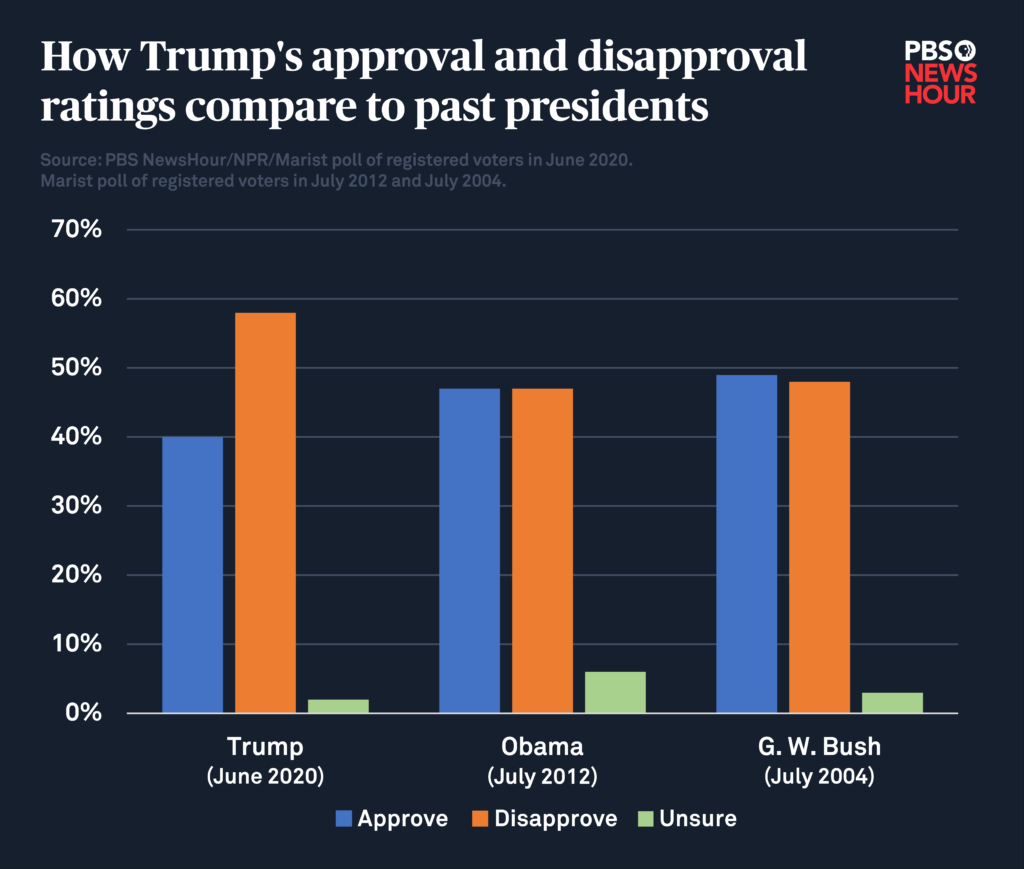 But it could be worse for the president. According to Gallup polling from July 1992, months before President Bill Clinton would defeat him, President George H.W. Bush’s job approval among Americans plunged to 29 percent. Bush was the last incumbent president not to win a second term.

It is unusual for a presidential incumbent to be this far behind in public opinion polling during a reelection bid, said Lee Miringoff, who directs the Marist College Institute for Public Opinion. He added that this drop suggests Trump needs to do one of two things: change the trajectory of his campaign and administration or engage Biden on the campaign trail.

Trump has encouraged states to reopen as the coronavirus continues to spread, with daily infection rates reaching new peaks in some parts of the country. Public health experts have urged the White House to promote social distancing, but the president has started to ramp up his campaign events, including a rally in Tulsa, Oklahoma, last week.

Confronted with criticism about a lack of testing months into the pandemic, Trump said during his June 20 rally that he told his administration to slow down testing, because “by having more tests, we have more cases.” White House Press Secretary Kayleigh McEnamy later tried to walk back the statement, saying it was a joke, but Trump then doubled down: “I don’t kid.”

The pandemic has plunged the nation’s economy into a recession. Tens of millions of Americans have filed for unemployment in the months since the first shutdowns, and the jobless rate in May was 13.3 percent, down slightly from an April high of 14.7 percent, although each rate fails to factor in people “unemployed on temporary layoff.” When adjusted for these people, the rates become 16.3 and 19.7 percent, respectively. Regardless, all rates are the highest the U.S. has seen since the Great Depression.

Amid the pandemic and economic crisis, the killing of George Floyd, a Black man, at the hands of a white Minneapolis police officer in late May stoked Americans’ discontent and unrest, prompting nationwide protests that have continued for weeks. 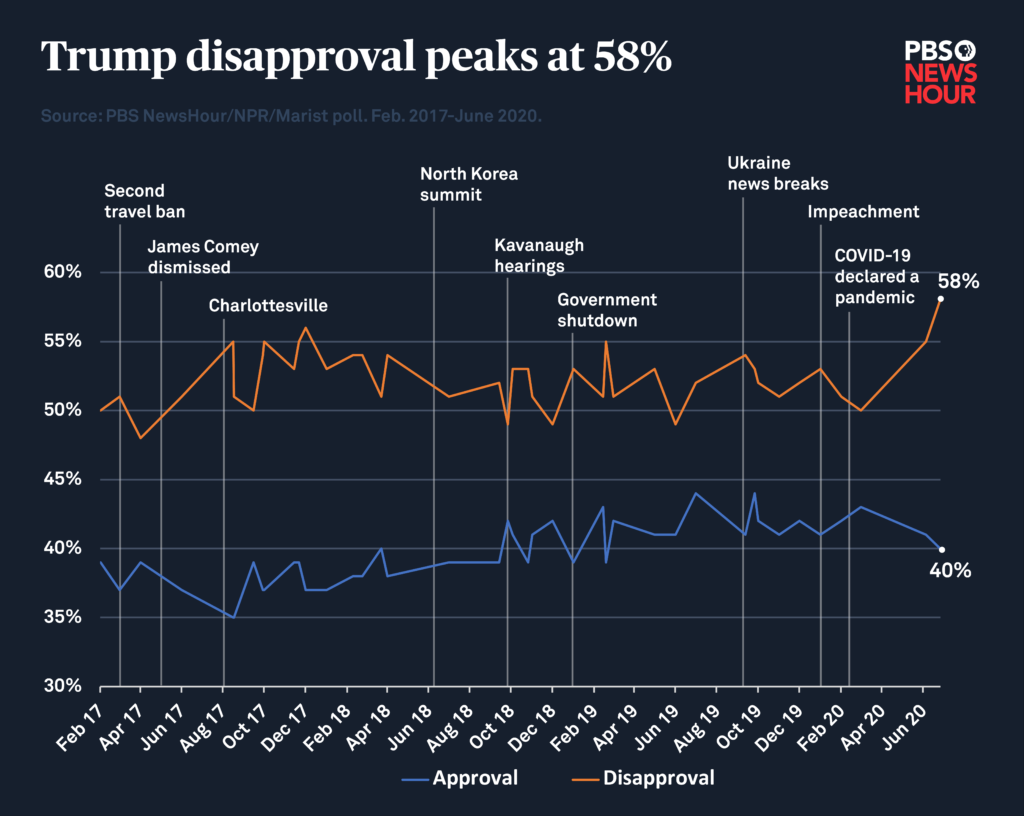 The country is polarized — on race and policing, on how to behave amid a pandemic, on the president’s job performance and much more — but nearly a quarter of Americans don’t have strong feelings about Trump. Twenty-three percent of Americans don’t feel strongly about their approval or disapproval of the president, and 2 percent were unsure when asked how they feel about Trump’s job performance. Barbara Carvalho, who directs the Marist Poll, said support from less entrenched Americans is often based on whatever issue or crisis is currently playing out.

“Right now, they’re making a choice between Trump and Not Trump,” Carvalho said, “but as we get closer to Election Day, we may be thinking, ‘Which of these two candidates do I have more confidence in to make the economy better or to improve the economic health of the country?’”’

“That’s where the election gets decided,” she said.

Trump is polling 5 points ahead of Biden with people who don’t have a college degree, while Biden is 26 points ahead of the president among college graduates. Biden is also 23 points ahead of Trump among women, and polling better among people of every generation except Baby Boomers.

Left: US President Donald Trump holds a Bible while visiting St. John's Church across from the White House after the area was cleared of people protesting the death of George Floyd on June 1, 2020, in Washington, D.C. (Photo by Brendan Smialowski / AFP) (Photo by BRENDAN SMIALOWSKI/AFP via Getty Images)