How the U.S. compares with the rest of the world on abortion rights

The past 50 years have been characterized by an unmistakable trend toward the liberalization of abortion laws, particularly in the industrialized world.

Each year, around 73 million abortions take place worldwide, according to the World Health Organization. This translates to about 39 abortions per 1,000 women globally, a rate that has stayed roughly the same since 1990. Notably, rates have diverged between countries with fewer restrictions and those with more: Between 1990–94 and 2015–19, the average abortion rate in countries with generally legal abortion (excluding China and India) declined by 43 percent.

By contrast, in countries with severe restrictions on abortion, the average abortion rate increased by around 12 percent. 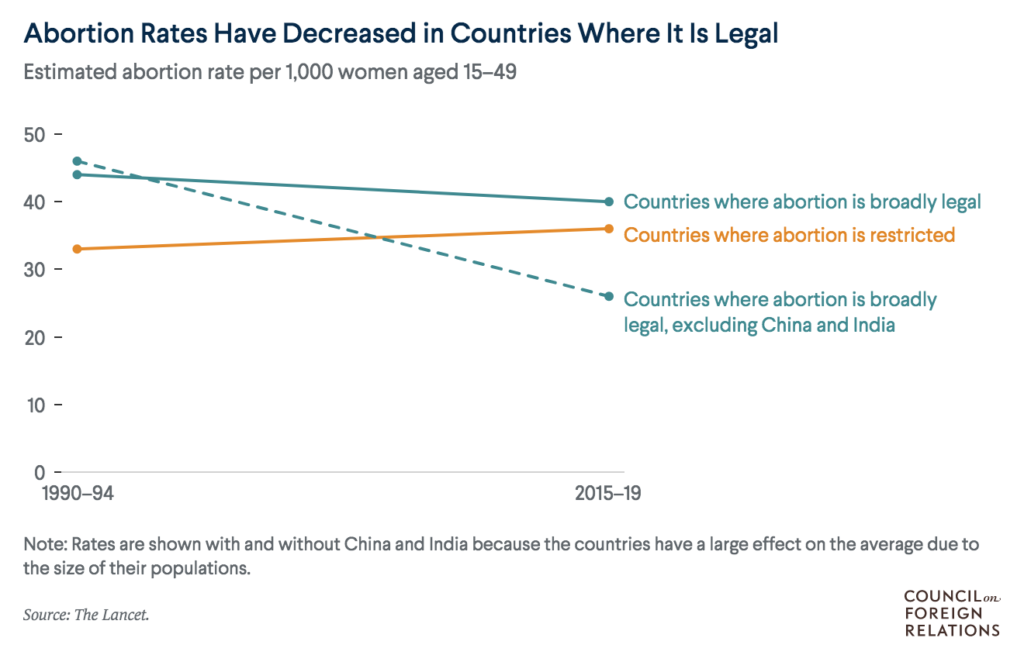 Rates are shown with and without China and India because the countries have a large effect on the average due to the size of their populations. Graph courtesy Council on Foreign Relations

As nations around the globe have expanded the grounds on which people can access reproductive health services, the quality and safety of abortion care have improved, as has maternal survival. However, the safety of abortion procedures diverges widely between countries where abortion is generally legal and countries with high restrictions on abortion.

WATCH: What to know about tech surveillance and abortion access

However, there remains strong opposition to abortion among some constituencies. And in recent years, a number of countries, particularly autocracies, have pushed back against the expansion of women’s and reproductive rights. Abortion opponents in the United States won a major victory in June 2022, when the U.S. Supreme Court struck down the 1973 decision Roe v. Wade, which guaranteed the constitutional right to abortion.

What does abortion law look like around the world?

Although the legal status of abortion varies considerably by region, a large majority of countries permit abortion under at least some circumstances; globally, two dozen countries ban abortion entirely. Most industrialized countries allow the procedure without restriction.

Around 100 countries have some restrictions, typically permitting abortion only in limited situations, including for socioeconomic reasons, risks to the physical or mental health of the woman, or the presence of fetal anomalies. However, legal language concerning exemptions for fetal impairment is often vague, resulting in uncertainty for medical professionals about whether performing certain abortions is legal. 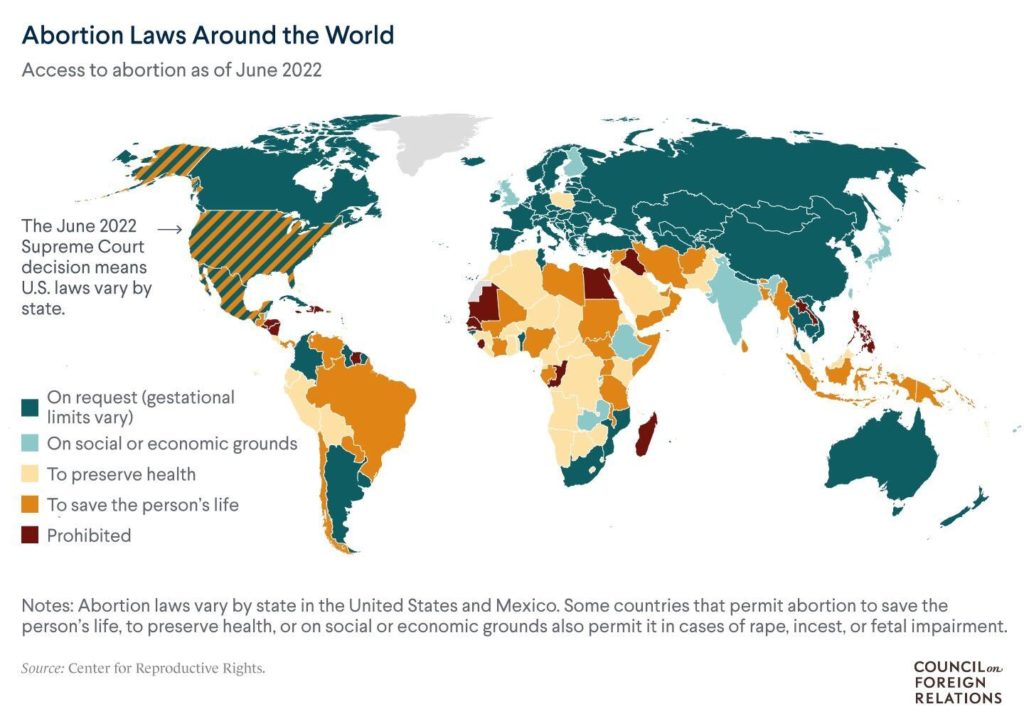 Abortion laws vary by state in the United States and Mexico. Some countries that permit abortion to save the person’s life, to preserve health, or on social or economic grounds also permit it in cases of rape, incest, or fetal impairment. Graph courtesy Council on Foreign Relations

At the 1994 International Conference on Population and Development in Cairo, 179 governments signed a program of action that included a commitment to prevent unsafe abortion. The WHO first recognized unsafe abortion as a public health problem in 1967, and in 2003 it developed technical and policy guidelines that include a recommendation that states pass abortion laws to protect women’s health. According to the U.N. Population Fund, addressing the unmet need for family planning would both considerably reduce maternal mortality and reduce abortion by up to 70 percent in the developing world.

How does the United States compare?

The Supreme Court’s decision on June 24, 2022, to strike down Roe v. Wade, overturns almost 50 years of precedent that conferred a constitutional right to receive an abortion. In the 1973 Roe decision, the Court held that the Constitution guarantees the right to choose to have an abortion, though it permitted regulations after the first trimester of pregnancy.

With Roe, the United States became one of the first countries to liberalize its abortion laws, along with several Western European nations. In 1992, Planned Parenthood v. Casey reaffirmed the right to an abortion but permitted additional restrictions, such as waiting periods and parental consent requirements.

For decades, states have introduced and implemented various laws regulating abortions. Some states passed laws to protect abortion access, while others imposed more onerous regulations on abortion providers and sought to prohibit abortion at earlier points in pregnancy. This led to the closure of more than 160 clinics and left a handful of states with only a single abortion provider.

In recent years, many states have passed increasingly strict abortion laws, such as in Oklahoma, where the governor signed legislation to ban all abortions after six weeks, except in cases of life-threatening pregnancies. The law resembles one passed in Texas in 2021; both also allow private citizens to sue anyone they suspect of providing or facilitating an abortion.

Roe’s reversal allows the thirteen states that have so-called trigger laws to either ban abortion automatically or within 30 days. While all of these state laws exempt abortions in cases of life-threatening pregnancies, many do not exempt pregnancies caused by rape or incest. Republican lawmakers and anti-abortion advocates have praised the Supreme Court’s decision, while Democratic lawmakers and abortion advocates have condemned it.

What have been recent trends?

The global trend in abortion law has been toward liberalization. Since 2000, 38 countries have changed their abortion laws, and all but one—Nicaragua—expanded the legal grounds on which women can access abortion services. Since 2020, Argentina and Thailand legalized abortions, with certain gestational limits; Mexico decriminalized abortion, as did South Korea; and New Zealand eased its abortion restrictions.

Most recently, Colombia made abortion legal on demand up to 24 weeks of pregnancy, the latest sign of a growing “green wave” in Latin America. Although most countries have taken steps to expand grounds for abortion, some—including Honduras and the United States—are enacting policies to tighten restrictions. 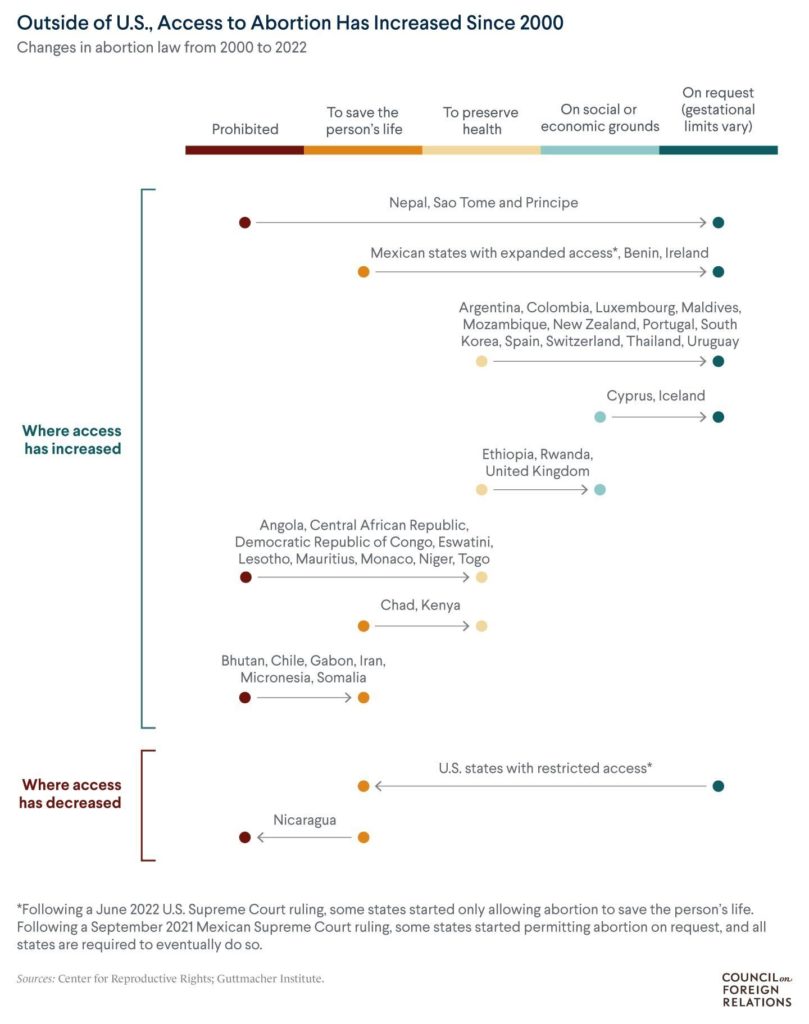 Here’s a look at how abortion laws have changed in a handful of countries around the globe:

China liberalized its abortion law in the 1950s and promoted the practice under its one-child policy, which was enacted in 1979 in an effort to curb population growth by restricting families to one child. The policy, under which abortion services were made widely available, came with severe coercive measures—including fines, compulsory sterilization, and abortion—to deter unauthorized births. China raised this long-standing limit to a two-child policy in 2016, along with other incentives to encourage population growth amid a rapidly aging population. In 2021, it increased the limit to three children, and China’s State Council issued guidelines on women’s development that called to reduce “non–medically necessary abortions.”

Postcolonial Kenya’s abortion law was rooted in the British penal code, which criminalized abortion. When Kenya adopted a new constitution in 2010, it expanded the grounds on which women could obtain an abortion to include emergency cases, or those in which the health of the mother is at stake. In June 2019, a court extended the exceptions to include cases of rape. As other former European colonies reevaluate their abortion statutes, many are expanding the grounds for abortion. For instance, Burkina Faso, Chad, Guinea, Mali, and Niger—nations whose restrictive abortion laws were holdovers from the 1810 Napoleonic Code imposed by France—have made abortion legal in cases of rape, incest, or fetal impairment.

In 2018, the Irish parliament legalized the termination of pregnancy before twelve weeks, as well as in cases in which the health of the mother is at stake. Previously, Ireland had one of the most restrictive abortion laws in Europe, codified in a 1983 constitutional amendment that effectively banned the practice. The 2012 death of Savita Halappanavar after she was denied an emergency abortion reignited public debate and protest and prompted a countrywide referendum to overturn the amendment; the referendum passed with 66 percent of the vote. In 2019, abortion was legalized in Northern Ireland, which is part of the United Kingdom (UK). The UK’s 1967 Abortion Act, which grants doctors in England, Scotland, and Wales the authority to perform abortions, was extended to Northern Ireland following a vote by the UK Parliament.

Zambia is one of the few countries in Africa where abortion is permitted for economic and social reasons, but, despite having a liberal law, structural and cultural barriers make it difficult for Zambian women to obtain abortions. As of 2018, Zambia had one practicing medical doctor per 12,000 inhabitants; and for the 55 percent of Zambians living in rural areas, health professionals are few and far between. The law stipulates that only a registered medical practitioner, and not a nurse or midwife, can perform an abortion, rendering safe access out of reach for most. Zambia is plagued by a high rate of abortion-related maternal mortality, with about 30 percent of maternal deaths caused by abortion complications.

The Central American country has among the world’s strictest laws on abortion, which has been banned since 1985. In 2021, lawmakers enshrined the ban in the country’s constitution; now, any change to abortion law requires at least a three-quarters majority in the National Congress. U.N. experts estimate that between around 50,000 and 80,000 unsafe abortions take place in Honduras each year. Honduras’s neighbors El Salvador and Nicaragua also have prohibitions on abortion, and they are the only two countries to have imposed new restrictions on abortion since the 1994 Cairo Declaration, which recognized reproductive health as critical to development.

In 2020, Poland’s Constitutional Tribunal ruled that abortions in cases of fetal impairment are unconstitutional, making the country’s abortion law one of the strictest in Europe. Because the vast majority of abortions performed in Poland prior to the ruling were due to fetal abnormalities, the decision initiated a near-total ban. In response, hundreds of thousands of people took to the streets to protest the decision, though it remains in effect. Polish law still allows abortions in cases of rape, incest, and life-threatening pregnancies, though doctors have reportedly been reluctant to perform legal abortions since the ruling. Doctors face up to three years in prison if the government finds they performed an abortion hastily or without sufficient justification.

Editor’s note: This article is based on original reporting by Rachel B. Vogelstein and Rebecca Turkington that was previously published on CFR.org in 2019.

Haydn Welch and Antonio Barreras Lozano contributed to this article. Will Merrow created the graphics.

This article originally ran on the Council on Foreign Relations website.