How to navigate a political apology

When news broke that Virginia Gov. Ralph Northam’s medical school yearbook page featured a racist photo, Northam apologized within hours. The Democrat acknowledged he was in the image and said he was sorry about “the decision I made to appear as I did in this photo and for the hurt that decision caused then and now.”

Less than 24 hours later, he had a different story: He’d overreacted when seeing the photo, which showed one man in blackface and another in a Ku Klux Klan robe, and, upon reflection and conversations with former classmates and friends, realized it wasn’t him (though he acknowledged he’d worn blackface at a separate event in the past).

Despite calls from state Democratic leadership to leave office, Northam has so far refused to resign. Whatever happens in Richmond, his confusing series of statements on his past are another reminder of the challenges of political crisis management. For Northam, members of Congress and 2020 presidential candidates, issuing the “right” kind of political apology can mean the difference between staying in office or political ruin.

Of course, Northam isn’t the first politician to issue a mea culpa, and he certainly won’t be the last. Just this week, freshman Rep. Ilhan Omar, D-Minn., apologized for comments Democrats and Republicans called anti-semitic. And recent history is littered with examples, from Bill Clinton’s admissions of sinning in the 1990s to President Donald Trump’s “locker room talk” apology in 2016. Still, there are some formulas for successful apologies,, particularly ones that resonates with the voting public.

No two political apologies are exactly the same, but the best ones often have a few things in common.

No two political apologies are exactly the same, but the best ones often have a few things in common, starting with a sense of sincerity.

“Over the last 20 or 30 years, the general public has gotten really sensitive to insincere apologies,” said Edwin Battistella, a linguist and the author of “Sorry About That: The Language of Public Apology.” According to Battistella and other apology experts, language matters.

“When you apologize by saying, ‘To anyone who was offended,’ it sounds insincere. It throws the apology back to the people who were offended or harmed,” said Battistella, an English professor at Southern Oregon University.

A notable example of this was Trump’s response in 2016 to the release of an old “Access Hollywood” tape that captured him boasting about sexually assaulting women. Trump’s initial apology, in a Facebook video, was fairly straightforward. “I said it, I was sorry, and I apologize,” Trump said in the video. 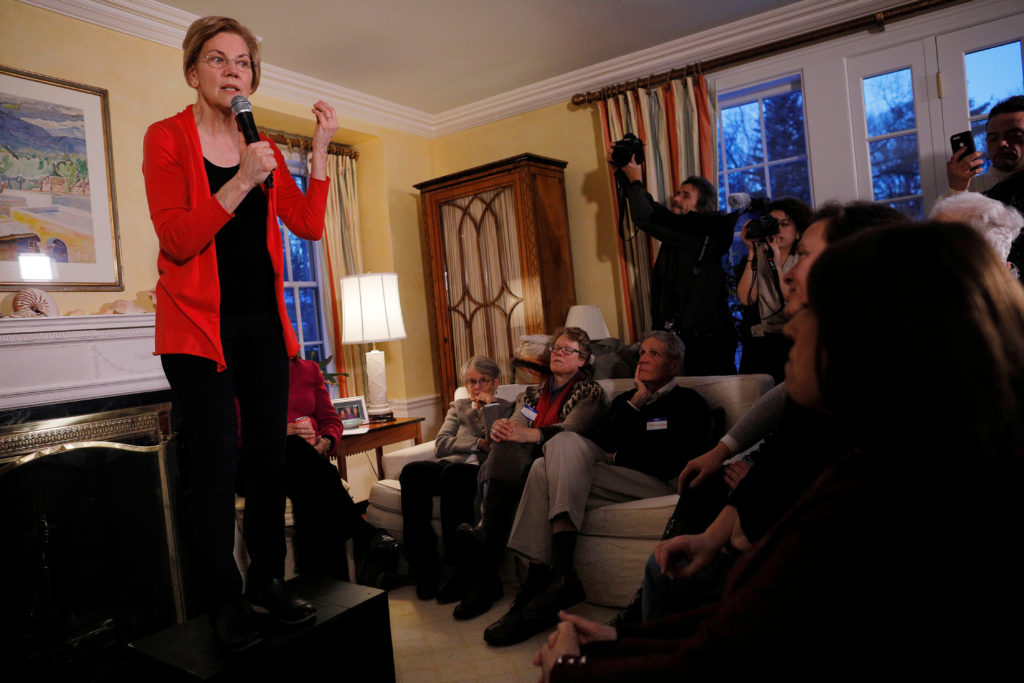 Sen. Elizabeth Warren, D-Mass., has had to apologize in recent weeks for her past claims of Native American heritage. File photo REUTERS/Brian Snyder

But his tone changed when he was asked about the tape during the second presidential debate. “This was locker room banter, a private conversation that took place many years ago. Bill Clinton has said far worse to me on the golf course, not even close. I apologize if anyone was offended,” Trump said.

Trump’s debate comments angered critics and many voters who said the apology came up short. For politicians navigating the apology field, “naming the harm that you did with your action, looking someone in the eye, and saying ‘I did this and it was wrong,” is the key to sounding sincere, Battistella said.

After Sen. Kirsten Gillibrand, D-N.Y., announced her 2020 presidential bid last month, she spent her first public appearances addressing — and at times apologizing for — her past record on key issues. As a member of the House from 2007 to 2009, Gillibrand had received an A rating from the NRA, and took conservative positions on immigration.

But the Democratic Party has moved left since then, and Gillibrand’s positions evolved as well. When she was confronted last month with her past positions on guns and immigration, Gillibrand was ready.

“I just didn’t take the time to understand why these issues mattered because it wasn’t right in front of me. And that was my fault. It was something that I’m embarrassed about and I’m ashamed of,” Gillibrand said on 60 Minutes.

“I don’t think there is a fancy way to say that I have sinned,” Clinton famously said, touching on everything from his reckoning with God to his views on repentance.

“It’s like this sort of radical egalitarianism: ‘I’m not trying to be a king, I’m just one of you, but by the grace of God I’m going to do better,’” Bauer said. “It’s a very intentionally leveling act.”

The interesting thing about Gillibrand’s form of apology, Bauer added, was that it came from a female candidate. In politics, women have rarely used the Clinton-style approach before, she said. “It was almost exclusively a male activity,” Bauer said, a way of powerful people to humble themselves, “but now it’s a sign that female politicians are gaining power” as well.

Gender aside, “a lot of the scholarship on apologies comes down to this,” Battistella said. “When you do something wrong, you have to reject your former self and allow there to be some shaming of yourself, of what you did, and hopefully emerge as a newer and better person.” 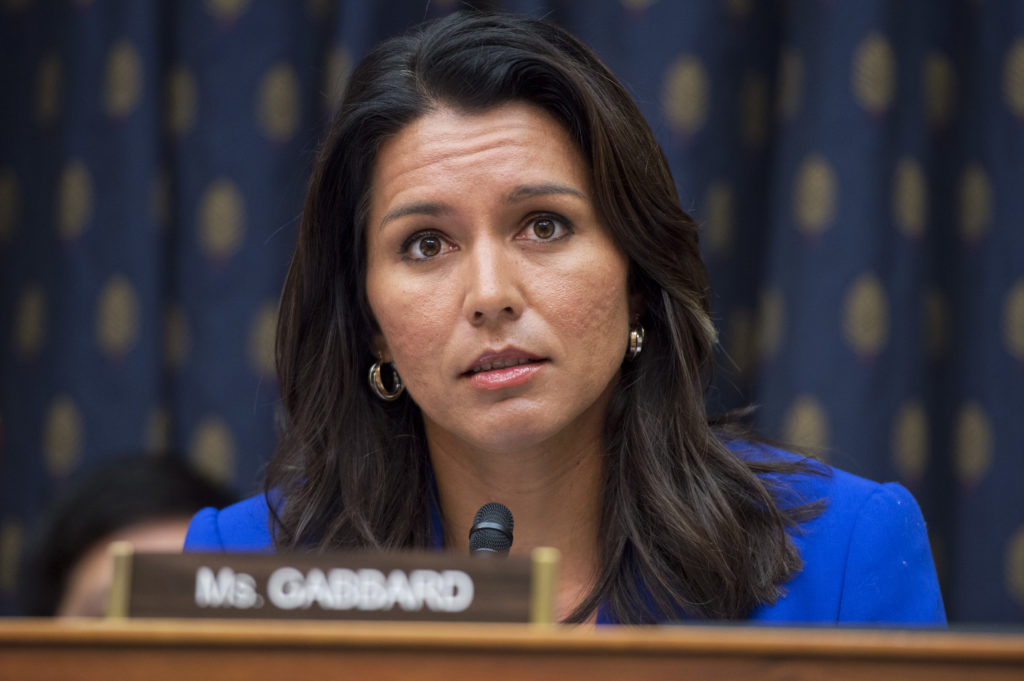 Rep. Tulsi Gabbard, D-Hawaii, is one of several 2020 Democratic contenders who have issued apologies for past positions or comments in recent weeks. (File Photo By Tom Williams/CQ Roll Call)

Another recent example of the self-shaming apology? Virginia Democratic Attorney General Mark Herring, who admitted that he once wore blackface at a college party decades ago.

“I had a callous and inexcusable lack of awareness and insensitivity to the pain my behavior could inflict on others. It was really a minimization of both people of color, and a minimization of a horrific history I knew well even then,” Herring said in a statement.

Herring’s apology was also notable because it differed from the approach taken by Northam, after news broke that his medical school yearbook page had a photograph of a person dressed in blackface standing next to another person dressed as a member of the Ku Klux Klan. Northam initially claimed he was the person in blackface in the yearbook photo, then changed his story to say that he wasn’t in that photo at all, but had donned blackface on another occasion.

By clearly acknowledging his former racist behavior, Herring owned his mistakes in a way that Northam failed to do, Battistella argued.

Sounding sincere and ashamed can help. But in politics, saying “I’m sorry” often doesn’t mean much if the person apologizing doesn’t offer tangible examples of personal growth or change. Promising to be better or different is critical, Bauer said.

“It’s a classic Evangelical arc: ‘I was in sin, I was enlightened, and I started on a new way.’ That can be very powerful,” Bauer said.

Some 2020 candidates are attempting to walk this path. Gillibrand credits her change on guns to talking with families affected by gun violence in Brooklyn. Rep. Tulsi Gabbard, D-Hawaii, took a similar approach in talking about her previous anti-LGBTQ comments and actions.

In the early 2000s, Gabbard worked with her father — a prominent opponent of marriage equality in Hawaii — in his efforts to curtail pro-gay legislation in the state. She also made various disparaging remarks about gay people at the time. One week after announcing her presidential run last month, Gabbard released a video on social media apologizing for her behavior.

“In my past, I said and believed things that were wrong, and worse, they were very hurtful to the people in the LGBTQ community and to their loved ones,” Gabbard said in the video. 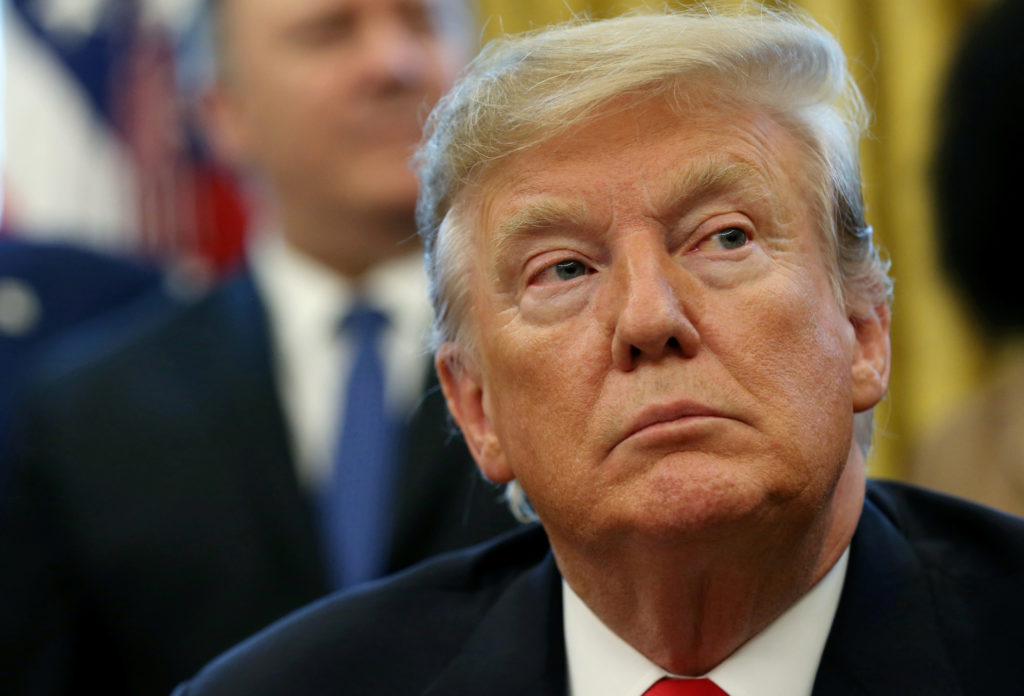 During the 2016 campaign, President Donald Trump issued a rare apology after he was caught bragging about groping women on a decade-old “Access Hollywood.” Photo by Leah Millis/Reuters

But Gabbard didn’t stop there. She went on to explain that her former beliefs were a result of her upbringing and said that she’s since formed her own opinions. She also made a point to highlight her record on LGBTQ issues in Congress, using it as evidence that she had changed.

Another strategy being used by 2020 hopefuls is avoiding issuing an apology all together.

Since entering the race, Sen. Kamala Harris, D-Calif., has drawn criticism over her record as a state prosecutor and attorney general. Progressives have called on Harris to break with her past, but she has chosen instead to defend her record.

“I am a daughter of parents who met when they were active in the civil rights movement. Nobody had to teach me about the disparities in the criminal justice system. I was born knowing what they are,” Harris said in a recent tweet.

Political strategists and experts on apologies agreed that sometimes ignoring criticism all together can work. “It sort of depends on the issue,” said Jerry Skurnik, a Democratic strategist. Since most Democratic voters support strict gun control and LGBTQ rights, “sticking to a position against those things will hurt you.”

But waiting too long to apologize, or not apologizing at all, can also backfire.

Sen. Elizabeth Warren, D-Mass., learned that the hard way after releasing a controversial video in which she tried to prove her Native American ancestry and rebut Trump’s claim that she lied about her family’s heritage. Critics slammed the video for being insensitive to Native Americans and playing into racist tropes about ethnicity. But Warren initially did not apologize, even as the controversy threatened to damage her progressive brand of politics.

Eventually, Warren did apologize for the video and for making other claims of Native American heritage. She met privately with Cherokee leaders last week as well. But some Democratic strategists have questioned if the apologies were enough for Warren to move on and put the controversy behind her for good.

It’s too early to tell how these different public apologies have helped or hurt 2020 contenders. But recent history offers examples of politicians like Bill Clinton who were able to make a comeback after saying ‘I’m sorry,’ and others who never fully recovered from their mistepps or scandals.

John Edwards, the former North Carolina senator and 2004 Democratic vice-presidential nominee, comes to mind. In 2007, news broke that Edwards was having an extramarital affair while his wife was battling cancer. Edwards issued a public apology in 2008, while he was making his second failed presidential run, but he continued to lie about his relationship and the fact that he’d fathered a child with his mistress.

The ongoing scandal derailed his 2008 presidential campaign, and later led to criminal charges that he had misused campaign funds to cover up the affair. There was no coming back for Edwards, though he avoided conviction in the criminal case.

As for Northam, he may find a way to remain in office, despite calls from Democratic Party leaders for him to resign. But even if he doesn’t step aside, his reputation may never recover, Battistella argued, putting him in an isolated position where he’ll find it difficult to muster cooperation from anyone in the state. “If he retains the governorship,” Battistella said, “it may not be a governorship worth having.”

Left: Virginia Gov. Ralph Northam's apologies and refusal to resign over racist yearbook photos are a fresh reminder of the challenges of political crisis management. File Photo by Jay Paul/Reuters