In Georgia, can Biden’s winning coalition deliver the Senate to Democrats?

Democrats are growing confident they might be able to pull off twin victories in the Senate runoff races in Georgia in January — what would have been a long shot political upset only a few years ago but is now being viewed as a real possibility after massive turnout from suburban voters in the general election helped President-elect Joe Biden flip the state from red to blue.

Biden’s hopes of enacting his agenda rest on the outcome of the Jan. 5 runoff elections, which will determine control of the Senate.

If Democratic candidates Jon Ossoff and Raphael Warnock beat Sens. David Perdue and Kelly Loeffler, the Republican incumbents, the Senate would be split 50-50. Vice President-elect Kamala Harris, as president of the Senate, would control the tie-breaking vote, opening the door for the Biden administration to push through legislation on the pandemic, the economy, climate change, and other priorities.

“Georgia is a battleground state, and we have voters who understand what’s at stake” in the runoff elections, said Nikema Williams, the state Democratic Party chair.

“This is a turnout election,” said Williams, who had her own election victory in the seat formerly held by the late civil rights icon John Lewis.

“It just depends on which side can get their people back out.”

In order to go two-for-two in Georgia, Ossoff and Warnock will need to recreate Biden’s coalition from the November election, in particular his strong support among suburban voters who were fed up with President Donald Trump. Large turnout in Cobb, Gwinnett and other suburban counties surrounding Atlanta powered Biden to victory in Georgia, making him the first Democratic presidential nominee to win the state since Bill Clinton in 1992.

The Associated Press called Georgia for Biden on Thursday, after the state completed a hand recount. Biden is leading Trump by less than 13,000 votes, out of more than 5 million votes.

WATCH: Behind the ballots in Georgia’s recount — the largest in U.S. history

Biden’s victory in Georgia and the opportunity for the party to control the Senate will motivate Democrats to vote in the Senate runoffs, said Jacquelyn Bettadapur, chair of the Cobb County Democratic Party. Democrats are focused on targeting voters who turned out in the general election, instead of trying to recruit new voters to the polls, she said.

“Democrats are engaged,” Bettadapur said. “I’m curious to see how successful Republicans are without Trump at the top of the ticket turning out the vote.”

There are two runoffs because no candidate in either Senate race on Nov. 3 crossed the 50 percent threshold required under state law to win outright. Perdue is up for reelection against Ossoff, while Loeffler is running in a special election against Warnock to fill the remaining two years of Johnny Isakson’s term. Isakson cited health reasons in his decision to step down last year.

Ossoff rose to prominence after narrowly losing a high-profile House race in 2017. Warnock, the senior pastor of Ebenezer Baptist Church in Atlanta, was not as well known coming into the race but managed to win more votes than Loeffler with a message focused on strengthening health care during the coronavirus pandemic.

Republicans said GOP voters were just as motivated as Democrats to get out and vote in the runoffs. Loeffler and Perdue have made control of the Senate the central theme of the upcoming January elections, portraying their challengers as radical progressives who would allow Biden to enact socialist policies if the Democratic Party wins control of the upper chamber. 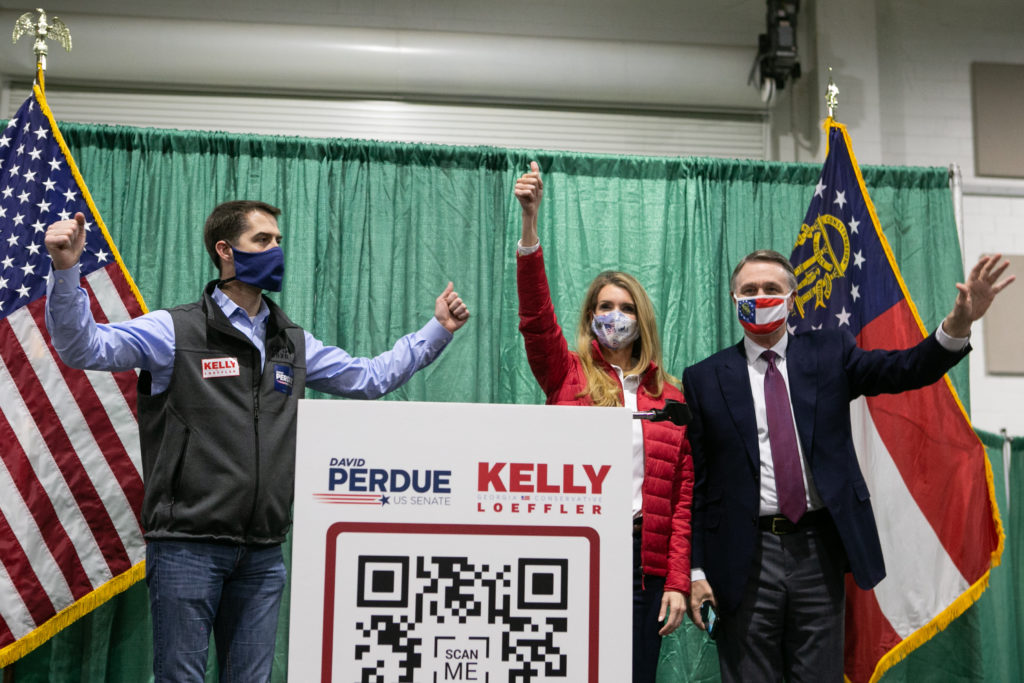 The message is aimed at moderate suburban voters from both parties who may have voted for Biden in the general election but are hesitant to give Democrats control of the White House and both chambers of Congress, said David Johnson, a Republican strategist.

Loeffler and Perdue need to “try to win back some of the suburbans who voted against Trump,” Johnson said. “Those are the areas where Democrats made the gains and provided Biden the extra edge. And they used to be Republican.”

The battle over suburban voters underscores demographic shifts that have reshaped the state’s political landscape.

Georgia’s population grew from roughly 8.2 million people in 2000 to 10.5 million in 2018, an increase driven primarily by a surge in new Latino and Asian residents. Non-white residents, who tend to lean Democratic, now account for 47 percent of the state’s population, according to state data.

The share of the state’s electorate that is white dropped from 68 percent in 2000 to 58 percent in 2018, a Pew Research Center study found.

The political changes are most visible in Atlanta and its surrounding suburbs. The Atlanta metropolitan area added 733,646 residents between 2010 and 2019, according to Census data, putting state and congressional races in play for Democrats for the first time in decades.

Those forces converged to help put Biden over the top in the general election. Biden received 75,000 more votes in Gwinnett County than did Hillary Clinton, the Democratic nominee in 2016 — turning her 5.8-percentage point win into an 18-point blowout. Biden outperformed Clinton in Cobb County by 60,000 votes, expanding her victory margin there from 2.2 points to a 14-point win. Clinton lost the state overall by 5 percentage points.

“Cobb County is still the number one county in the state in terms of Republican votes, but the growth of the county unfortunately for us has been mostly Democratic,” said Jason Shepherd, the county’s Republican chair.

In the runoffs, “Republicans can’t win the state without massive” turnout in suburban areas like Cobb County, he added.

But voter turnout in runoff elections in Georgia — and across the country — is typically lower than in the preceding general election. It is always a challenge for candidates to convince voters who are tired of politics to go back to the polls so soon after a long, divisive general election season.

In 2008, 2.1 million people voted in Georgia’s Senate runoff election between then-Sen. Saxby Chambliss, the Republican incumbent, and Democrat Jim Martin. That represented a nearly 50 percent drop in the turnout rate from the general election.

Chambliss beat Martin by roughly 3 percentage points in the general election that year, but he received 49.8 percent of the vote, falling just short of the 50 percent threshold required under state law to avoid a runoff. Chambliss routed Martin in the runoff the following month, winning by nearly 15 points.

Republicans pointed to the 2008 runoff in arguing that Democrats were too overconfident this time around. “When Saxby was in the runoff people were coming out of the woodwork to help” him win, said Shepherd, who served as a regional chairman for Chambliss’ campaign.

Others said the state has changed too much since then to make it a meaningful comparison.

Twelve years ago, “Republicans were at the apex of their power and their strength in the state,” said Andra Gillespie, a political science professor at Emory University in Atlanta. Biden’s victory this year suggests “there are many more Democrats in the state now in 2020 than there were in 2008.”

As the races ramp up, money from outside political groups and donors is pouring into the state. Spending on both sides has already topped $100 million and that figure is expected to grow significantly in the weeks leading up to the start of early in-person voting on Dec. 14.

Campaign volunteers are also flooding into the state ahead of the Jan. 5 runoff. Democrats from across the country have for two weeks been calling to volunteer to travel to Georgia to help get out the vote, said LeWanna Heard-Tucker, the head of the Democratic Party in Atlanta. She said outreach efforts so far have focused on reminding voters when the election is, and when the early voting period starts.

Kelly Spencer, a self-described independent voter who recently moved to Atlanta from a nearby suburb, said she was highly motivated to hand Democrats control of the Senate.

“There might have been a time when I would have said there’s better to have some balance. If we have a Democratic president, Republicans should be in control of the Senate,” said Spencer, a real estate investor. Spencer said she has voted for Republicans and Democrats for president in the past, but supported Biden in 2020 because she was “so appalled by Trump’s demeanor” in office.

Trump’s refusal to concede the election and baseless claims of voter fraud since Nov. 3 turned her off even further from backing Republicans in the runoffs, she said.

But Shepherd, the Republican chairman in Cobb County, said he thinks Trump’s decision to keep fighting the results of the election would motivate his base to show up for the runoffs, especially with control of the Senate up for grabs. “Republicans across the state are really eager to send a message,” he said.