MINNEAPOLIS — It’s the way George Floyd died that hurts the most.

“To see a man being held down that way, it’s just too much,” said Franklin Bridgeman, 53, who is black and a longtime resident of Minneapolis, Floyd’s hometown. “Of all the police shootings and killings, it’s the most painful. This was just so blatant.”

The police “don’t care about us at all. They know they can get away with it,” Evans, 21, added, and for that reason, she’s glad her city decided to protest. “They hear us now. They see what we’re doing.”

Floyd, a 46-year-old black man, died on May 25 after a white police officer, Derek Chauvin, held him to the ground with a knee on his neck for nearly nine minutes as Floyd said several times, “I can’t breathe.” Video of the incident captured by bystanders quickly went viral, spurring protests in Minneapolis and dozens of cities across the country, including Los Angeles, Chicago, Detroit, New York, Atlanta and Washington, D.C.

Chauvin, 44, and three other officers who were present at the arrest were fired the day after Floyd’s  death. Chauvin was charged on May 29 with third-degree murder and manslaughter.

But by then, the protests in Minneapolis that had started peacefully were increasingly punctuated by confrontations between residents and police. Swaths of the city were set on fire and looted. Police fired tear gas, pepper spray and rubber bullets to disperse crowds. The governor imposed a curfew and ordered the largest deployment of the National Guard in state history.

In interviews around Minneapolis, many white residents expressed shock that something like this could happen in their city. Black residents said the anger and pain underlying the protests were both familiar and misunderstood.

“It has to happen,” Merina Neal, 44, said of the protests. “Not only can we not breath, we can’t sleep. As a mother of young black boys, every moment they’re not home in time, my first thought is they got shot.” 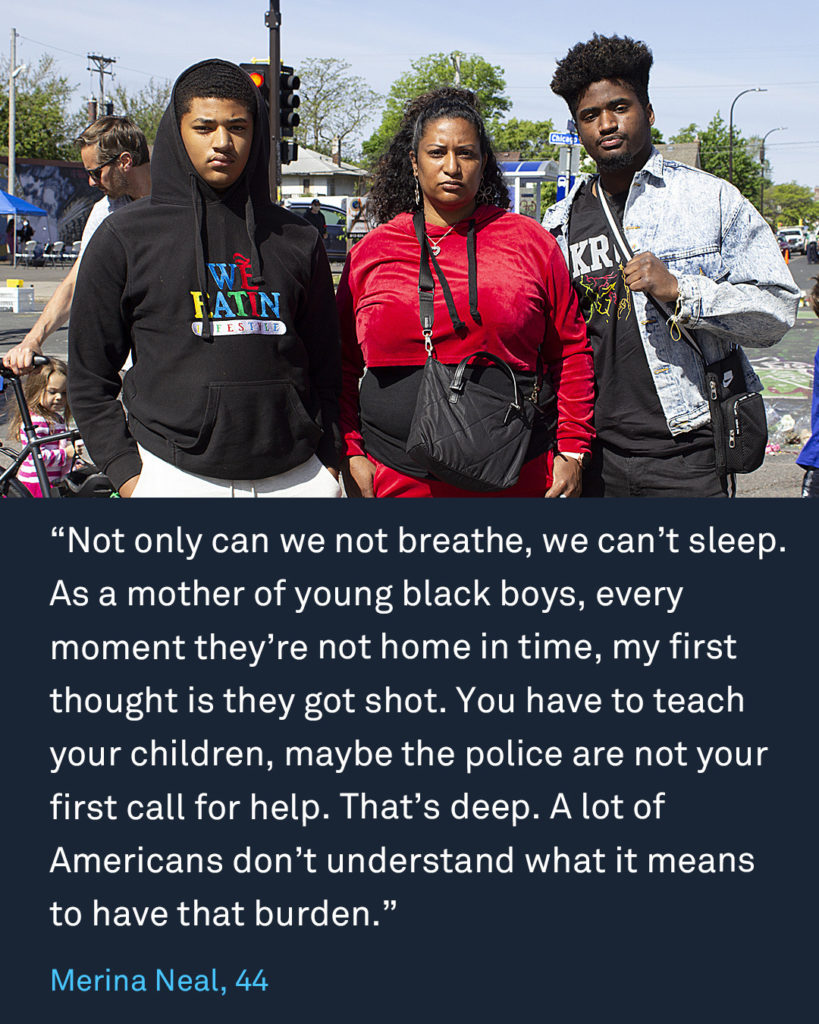 “You have to teach your children, maybe the police are not your first call for help. That’s deep. A lot of Americans don’t understand what it means to have that burden,” Neal said.

Neal spoke at a makeshift memorial at the intersection of 38th Street and Chicago Avenue, near the spot where Floyd was arrested in the Powderhorn section of the city. The site has become a central gathering place for residents from the neighborhood, as well as people from the greater Minneapolis area.

Like other parents, Neal brought her children, two sons aged 20 and 16, to take in the scene. The younger son, a high school sophomore named Justin, said the diverse crowd there on Sunday made him feel proud of the city’s character. But he said Floyd’s death was a painful reminder of the challenges of being black in America.

“Wherever I go in life, I’m a black man. I’m a person of color. You can’t just turn that off. You’ve gotta be aware of your surroundings, and be smarter and safer. I kind of have to be six steps ahead,” he said.

Michael Fingerlin, 50, who is white and lives six blocks from the place where Floyd was killed, teared up as he spoke about trying to watch the footage of Floyd’s death.

“It shouldn’t be a privilege to be able to go out your front door [and be safe] being who you are. It feels like there’s a system out there to protect us, and it’s just not fair,” he said.

Other white residents said that, as a group, they need to be more honest with themselves about structural inequality in the United States, including police brutality that disproportionately affects people of color and black men in particular.

“White people tend to make it about us and say things like, ‘It’s not about race.’ That’s just not the case,” said Derek Turk, 30. His partner, Megan Yahnke, 31, who is also white, said it was difficult to watch whole blocks in the city go up in flames in the protests. On the one hand, “I don’t want to see it happen,” she said, “but I do think it’s worth it” to send a message that the way the police treated Floyd was unacceptable.

In the black community, residents said the destruction of businesses and other property across the city, and the media’s focus on instances of violence created a distraction that shifted the attention away from the tragedy of Floyd’s death.

The protests have been unstable at times. Hundreds of people have been arrested, including 276 on Sunday and early Monday, according to the state Department of Public Safety. National Guard vehicles have rumbled through the streets at night. But the vast majority of protesters have demonstrated peacefully.

The perception that the protests are entirely dangerous and chaotic is false and perpetuates negative stereotypes, said Devonne Mayweather.

“It’s important to understand everybody ain’t out here rioting and looting,” Mayweather, 33, said. At the same time, he added, people watching the events unfolding in Minneapolis from afar must try to understand the heartbreak and anguish the city’s black residents are feeling.

“If the people don’t get what they want as far as justice, they will rise up. We don’t really want that, but it will happen,” he said. “If you poke me, I’m gonna bleed. This is them poking us, and us bleeding out.”

Brian Galvin, 45, did not participate in the protests. But he said as a black man he knew exactly what was fueling people who have taken to the streets every day since Floyd’s death.

“If you ask a white person, ‘Do you want to trade shoes?’ they’ll say no. Us black men, we’re born on defense,” Galvin said. “It’s been a long time coming. This has been going on for years.” 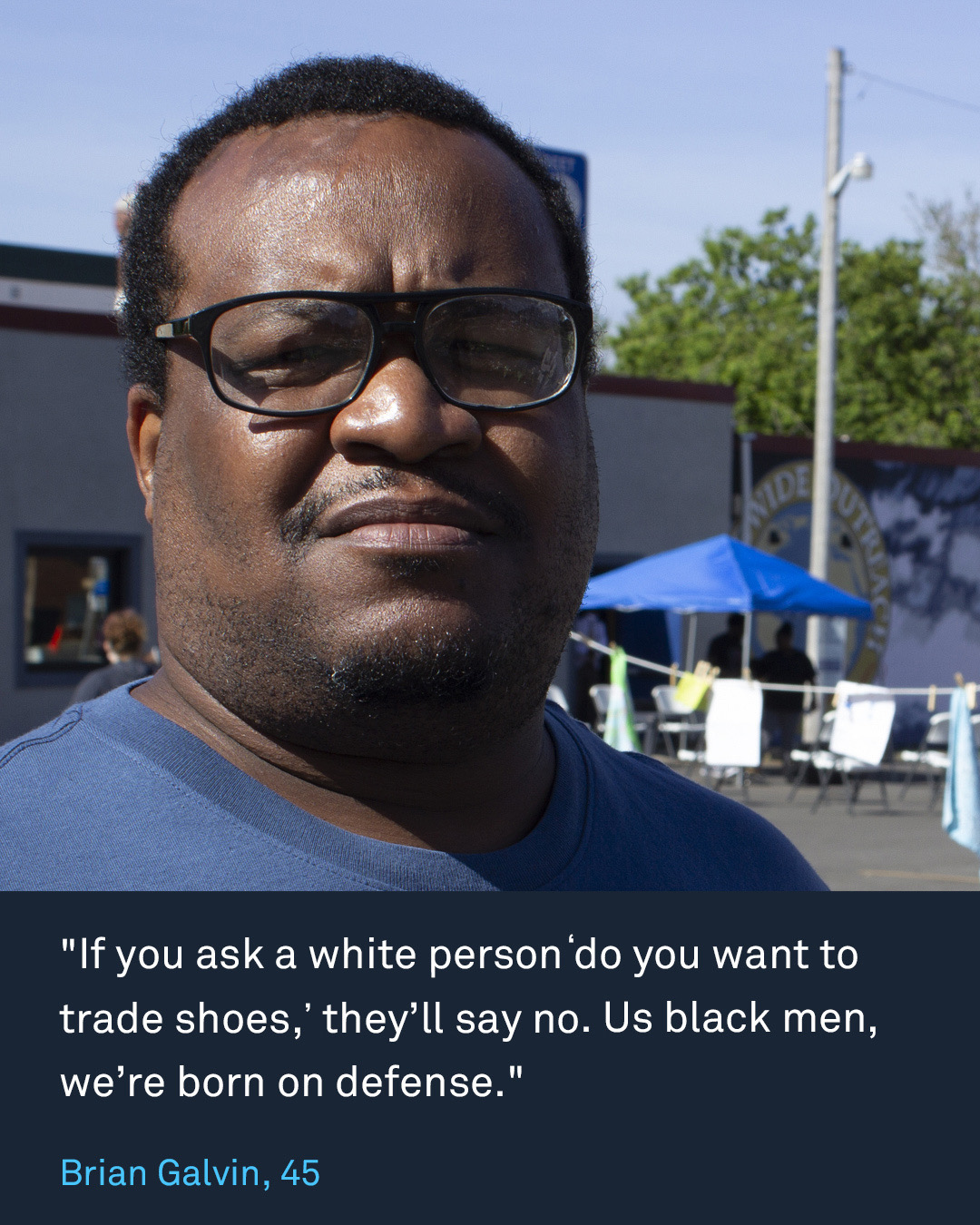 Left: MINNEAPOLIS, MN - A man kneels and holds up his fist at a memorial site where George Floyd died May 25 while in police custody, on June 1, 2020 in Minneapolis, Minnesota. George's brother Terrence Floyd visited the site today and called for justice and the prosecution of all four officers involved in the incident. Photo by Stephen Maturen/Getty Images