MONTGOMERY, Ala. (AP) — A meeting with nearly 80 black pastors in Detroit. A speech before a black Democratic organization in Montgomery. A rally at a historically black university. A tour of Martin Luther King Jr.’s church. An early voting kickoff at an African American museum. All in the past two weeks.

While Mike Bloomberg’s rivals battled it out in majority-white Iowa and New Hampshire, the billionaire presidential candidate aggressively courted the black voters critical to any Democrat’s chance of winning of the nomination. The effort, backed by millions of dollars in ads, has taken him across Southern states that vote on March 3, from Montgomery, Alabama, and this week Raleigh, North Carolina, and Chattanooga, Tennessee, states where African American voters can decide a Democratic primary.

His pitch is one of electability and competence — hoping to capitalize on black Democrats’ hunger to oust President Donald Trump. But as he courts black voters he’ll also have to reconcile his own record as mayor of New York and past remarks on criminal justice.

Bloomberg’s outreach aims squarely at former Vice President Joe Biden, who is banking on loyal black voters to resuscitate his bid after poor showings in Iowa and New Hampshire.

“Who can beat Donald Trump? That’s what people care about,” said former Philadelphia Mayor Michael Nutter, who is among the black leaders endorsing Bloomberg. Nutter says Bloomberg’s record of accomplishments outweighs the damage of flawed policing.

Bloomberg has no doubt been helped by his limitless financial resources and his strategy to focus on states conducting primaries on Super Tuesday. One of the world’s richest men thanks to a net worth of roughly $60 billion, Bloomberg has spent more than $300 million of his own money on advertising, including spots on black radio stations, a Super Bowl ad that featured an African American mother who lost her son to gun violence and a national ad touting his work with President Barack Obama on gun legislation and a teen jobs program.

He’s also racked up endorsements from African American mayors and held an events with key figures in the black community, including a meeting with black pastors in Detroit and a speech at an Alabama Democratic luncheon. Much of the outreach has been aimed at middle-age and older voters, who turn out more reliably, and appeals to a sense of pragmatism. Bloomberg may not be the candidate you know best, the campaign argues, but he’s the best poised to beat Trump. On Wednesday, Georgia Rep. Lucy McBath endorsed him, citing his record on gun violence prevention. McBath ran for Congress in 2018 after her teenage son was shot to death in a car over a dispute about loud music. She was the first Democrat elected to her seat since 1979. 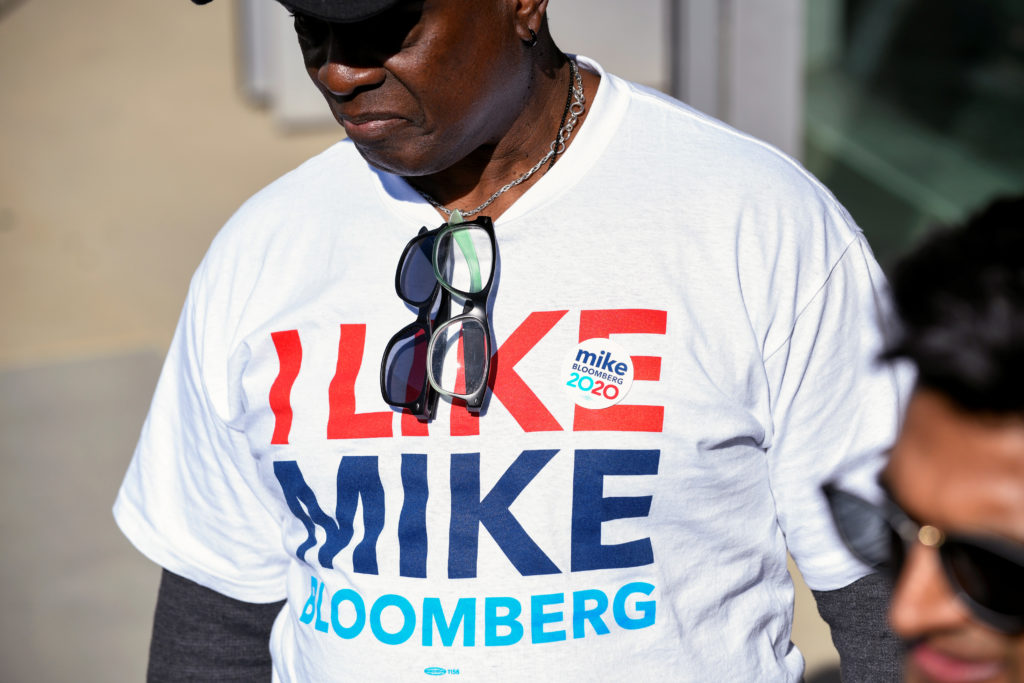 A recent poll shows signs of success for Bloomberg. The Quinnipiac University poll conducted after the Iowa caucuses found Bloomberg with 15% support nationally, up from 8% in a late-January poll. That put him about even with Biden and Massachusetts Sen. Elizabeth Warren and slightly ahead of Pete Buttigieg, who essentially tied with Sanders in last week’s Iowa caucuses. The poll showed Sanders leading, with 25% nationally.

During a recent rally at historically black Alabama State University, Bloomberg drew several hundred people, who chanted “I like Mike!” and prompted a dry response from the understated candidate.

“Better they do that than they don’t do that,” he said.

Louretta Wimberly, a retired educator from Selma, Alabama, watched the rally and reconsidered her support for Biden. She’s felt a longtime connection with the former vice president, but she likes what’s she’s hearing from Bloomberg.

“I’ve been following him because he is speaking to the things that we black women in Selma and in the Black Belt want — public education, health care and infrastructure,” Wimberly said.

Voters like Wimberly don’t often raise Bloomberg’s record in New York, but his critics do. For them, his criminal justice policies in New York — specifically his embrace of a practice known as “stop-and-frisk” that disproportionately affected people of color — remain a mark on his civil rights record that cannot be erased by his recent apologies. The issue flared up again this week when comments he made in a 2015 Aspen Institute speech resurfaced. In the audio, Bloomberg says the way to bring down murder rates is to “put a lot of cops” in minority neighborhoods because that’s where “all the crime is.”

Bloomberg apologized for supporting the practice just days before he launched his 2020 bid in November, and repeated that apology on Tuesday, saying the remarks “do not reflect my commitment to criminal justice reform and racial equity.” But the timing of his apologies strikes some as political expediency.

“He should have done it when it mattered. Now he just looks like someone who’s willing to say anything to get elected president,” said Hawk Newsome, president of Black Lives Matter New York, who said younger black voters in particular will not be willing to give Bloomberg a pass on his record on policing. “What he’s selling we already bought, paid for and returned.”

The prominent activist Rev. Al Sharpton, who fought with the mayor over stop-and-frisk, said Tuesday he told Bloomberg in a phone call moments after his November apology that “it’s going to take more than one speech, but it’s a step in the right direction.”

Sharpton said Bloomberg had “an upside and a downside” as mayor but that his biggest strength as a presidential candidate is his argument that he’s the best one to take on Trump. That’s especially true if Biden — his pitch to black Americans has been that he’s most electable in November — continues to slip, leaving voters thinking Bloomberg “may have a better shot” in November, Sharpton said.

But Bloomberg also is viewed skeptically by some younger and progressive voters weary of putting another rich man in the White House. And it’s far from clear that his cool, business-like approach to campaigning will connect with voters.

A tour guide at King’s church asked the people gathered around them to join in song. While others followed her lead, singing and clapping to “This Little Light of Mine,” Bloomberg simply ignored the request and carried on with introducing himself to people and shaking their hands, until the singing stopped.

READ MORE: What does Michael Bloomberg believe? Where the candidate stands on 6 issues

On the stump, Bloomberg appeals more to the pragmatism of voters who want to beat Trump and get things done.

James May, the former mayor of Uniontown, Alabama, said before a Bloomberg speech at a Democratic Party leader luncheon that Bloomberg’s accomplishments as mayor were enough to earn his support. “If he does that when he becomes president he’s my kind of guy,” May said. As for Biden? “He’s good, too, but not quite good enough.”

Bloomberg has so far been shut out of debates, allowing him to largely avoid tough public questioning of his record. That could change next week when Democrats hold their next debate. Bloomberg needs to meet a polling threshold in two more polls to make the stage for the first time.

Maurice Hawkins, an Air Force veteran from Virginia Beach, Virginia, plans to vote for Biden on Super Tuesday, but he said Bloomberg’s history with stop-and-frisk wouldn’t stop him from supporting the former mayor.

Hawkins said Democratic voters can be too rigid about a candidate’s history, particularly on issues where the country has evolved, such as criminal justice. Biden has had to answer for his own record, including helping craft the 1994 crime bill, which critics blame for the mass incarceration of minorities over two decades. Biden has proposed a plan that would reverse parts of that bill.

Hawkins, who is black, said he attended a Bloomberg speech in Norfolk, Virginia, last week because he’s considering backing Bloomberg if Biden isn’t in the race when Virginia votes.

“I wanted to hear what he has to say,” Hawkins said, “because I think because we’re in a really turbulent primary, we don’t know who’s gonna come out of it.”