VANCE, S.C. — Before a Family Dollar store opened last month in tiny Vance, South Carolina, a gas station was the only place in town that sold food.

Jobs are scarce. The nearest hospital is a half-hour drive away in Orangeburg, the county seat and a popular stop for Democrats trying to court African American voters in the South Carolina primary.

The candidates largely ignore places like Vance, a rural community of a few hundred people where LaNequa Ferguson and other residents say they feel left out of the political process. Ferguson, 30, runs a performing arts company she’s built from scratch, in a front room of her house that she’s converted into a dance studio.

An area off the dance studio — named LaLa Land Academy — is devoted to trophies her company wins at regional competitions, as well as family pictures. Some of them include her brother, who died at the age of 9 after suffering a seizure at the house. It took emergency responders more than 30 minutes to arrive on the scene, according to Ferguson and other family members. Fifteen years later, Ferguson said she still believes her brother might have lived if help wasn’t so far away.

As far as the Democratic Party is concerned, “we’re important up until Saturday. After Saturday, we’re forgotten for the next four years.”

“I’m always gonna have an ‘I’m-on-my-own’ mentality,” Ferguson said in a recent interview at her home.

Ferguson, like many African American voters in South Carolina, is planning to back former Vice President Joe Biden in the primary. Biden is widely seen as the most experienced candidate in the race, due in large part to his close association with former President Barack Obama.

But in interviews with rural black voters across the state in the days before the Feb. 29 primary, many said they weren’t confident that Biden — or any Democrat — would keep the promises they’ve made on the campaign trail.

“It’s nothing but talk,” said Nathan Hill, a farmer who runs community agriculture programs in Orangeburg County. “The candidates, they talk about all these great things. But you’ve got to meet the basic needs first,” said Willy Booker, a retired U.S. Fish and Wildlife Service worker and community activist.

“There’s such a big disconnect” between Democratic presidential contenders and people living in rural areas, especially African Americans, Booker added. As far as the Democratic Party is concerned, “we’re important up until Saturday. After Saturday, we’re forgotten for the next four years.”

South Carolina’s economy is driven by its largest metropolitan areas: Greenville, Columbia and the Charleston region, which has benefited from a recent boom in auto manufacturing and a thriving tourism sector along the coast.

The rest of the state has been left behind, as textile manufacturing and tobacco farming — two industries that once helped power South Carolina — have declined in recent decades.

Yet, a majority of voters in South Carolina live outside cities, in suburbs, small towns and rural communities that resemble Vance. Two-thirds of the 369,526 total votes in the 2016 Democratic presidential primary were cast outside of the state’s three biggest metropolitan areas.

“We typically forget that there are Democrats in more rural areas because they don’t get a lot of attention,” said Danielle Vinson, a political science professor at Furman University in Greenville.

Rural South Carolina faces a host of challenges around employment, education, transportation, and access to health care, among other issues — problems that also exist in urban areas, but are especially pronounced in poorer, sparsely populated parts of the state that have fewer economic resources and political clout.

Residents have to travel greater distances than their urban counterparts to receive health care services, said Jan Eberth, the director of the Rural and Minority Health Research Center at the University of South Carolina. That’s especially true for speciality care, she said.

“In rural South Carolina, and nationwide, rural communities are more likely to have higher mortality rates and incidence rates for many types of cancer, and they’re diagnosed at later stages,” Eberth said.

The cost of health care is also an obstacle for many rural residents in areas where good-paying jobs are few and far between.

The state’s unemployment rate was 2.3 percent in December, according to data from the U.S. Bureau of Labor Statistics. But the number is often higher in rural communities, according to Doug Dent, the CEO of the Greenville Revitalization Corporation. The economic development group is focused on reviving a region that was dependent on a textile manufacturing industry that shrank in the 1970s and ‘80s, in response to growing competition from abroad.

“When the textile industry left, so did all the jobs,” Dent said.

Voter frustrations over the economy and trade have opened the door for candidates like Sen. Bernie Sanders who have promised to shake up the status quo, Dent said.

“A lot of folks who live in rural communities, they’re tired of being kicked around,” Dent said. “They just want someone who’s tough enough and angry enough to do something about it. Bernie certainly portrays that image.”

Sanders has made inroads in the state since 2016, when he lost South Carolina to Hillary Clinton by nearly 50 points. But Sanders will enter Saturday’s primary trailing Biden by roughly 10 percentage points, according to RealClear’s polling average. 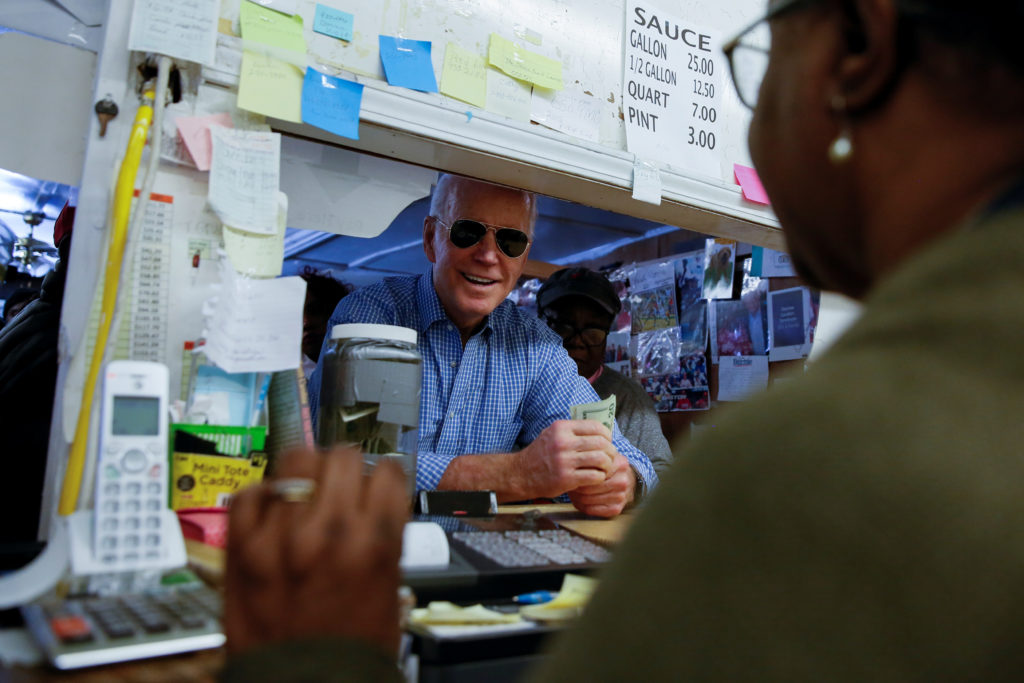 Biden’s front-runner status in South Carolina has not been seriously challenged since he entered the race last spring. The former vice president predicted a victory in South Carolina during the last Democratic debate in Charleston, and his campaign appears confident he can hold off Sanders, the leading vote-getter in the first nominating contests.

The former vice president’s staying power is a testament to his enduring popularity with black voters across the state. But it also reflects the Biden campaign’s strategy of getting the candidate out of the bigger cities and into more rural areas during campaign swings through the state.

Suburban and rural voters also skew more moderate than progressives in cities like Charleston and Columbia, making them more open to Biden’s centrist policy agenda. At the end of the day, Sanders’ “Medicare for All” proposal and other plans remain too liberal for many moderate voters in South Carolina, said state Sen. Brad Hutto, a Democrat who endorsed Biden in the primary.

“There clearly is a desire for change, but the most important change is getting rid of” President Donald Trump, Hutto said. “A lot of people are coming to this realization, and they’re going to vote for Biden so somebody can beat Sanders.”

Still, some rural voters who may once have rejected progressives like Sanders said they were open to his message, especially around issues like calling for a $15 an hour federal minimum wage.

Back in Vance, Ife Braithwite earns around $12 an hour as an assistant manager at the Family Dollar store that opened in January. Braithwite, 35, has an undergraduate degree in business but was never able to land her dream job as a clothing buyer for a department store.

Getting by on her paycheck is tough but doable, Braithwite said. But she said the store’s more junior employees struggle to make ends meet while earning the minimum wage of $7.25 an hour. Despite the low wages, work is so hard to find in the area that the store receives roughly three applications a day, she said.

“Bernie really wants to do something,” said Braithwite, who is deciding between Sanders and Biden. “Whether or not he is going to get it done, he’s going to try.”

Braithwite is thinking of moving out of Vance to a city once her 1-year-old is ready for school. But she said the move would be expensive, and she worried about the higher cost of living in a city, a common refrain from rural residents contemplating leaving their communities.

Ferguson, who runs the dance company out of her home in Vance, said she’s also considered moving to a big city, or even out of the state. But something keeps her rooted to her hometown, she said. Part of it is family, and part is a desire to invest in her community, she said.