Hull was also the first female speaker of the Arizona House and was serving as secretary of state in 1997 when her predecessor stepped down after a fraud conviction. She then won a full term in 1998.

Former Gov. Jan Brewer, who had known her since 1981, said that Hull and her husband, Dr. Terry Hull, died of natural causes within hours of each other on Thursday. She said both had been in declining health.

“Whenever she engaged in anything she took it on full strength and worked hard – trying to get it done diligently and get it done right, so that it did make a difference,” Brewer said.

As governor, Hull, a Republican, won approval of new funding for education and expanded health care for children of low-income families, but her record was blemished by a costly fiscal fiasco involving state subsidies for alternative-fuel vehicles. 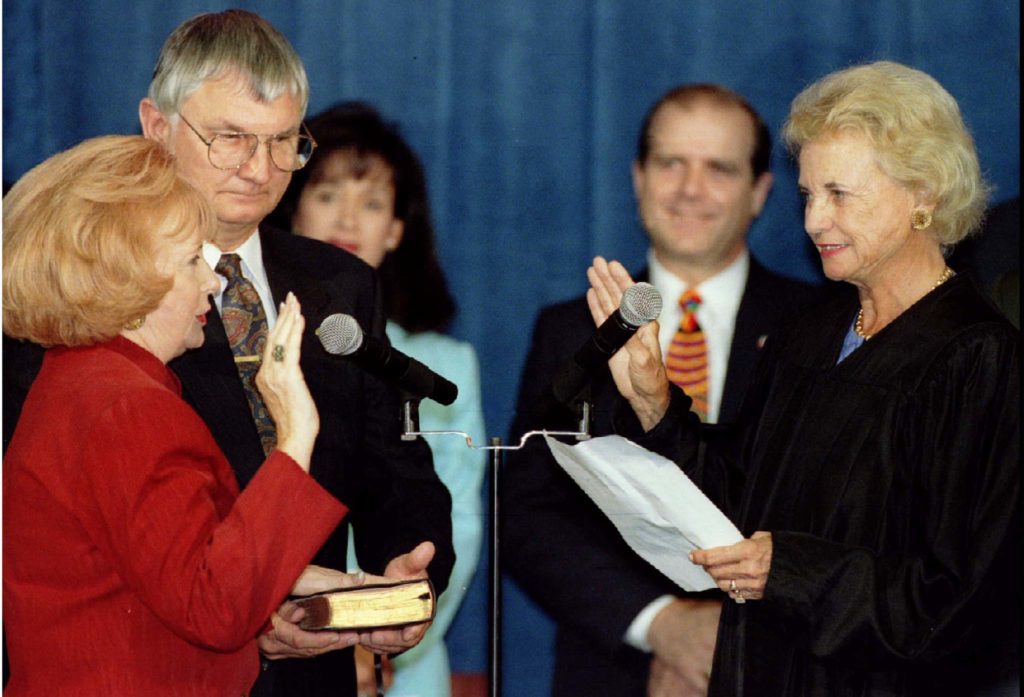 Hull served 14 years in the Legislature before being elected secretary of state in 1994. She was elevated to the governor’s office on Sept. 5, 1997, upon fellow Republican Fife Symington’s resignation following his conviction in a bank fraud case. Arizona has no lieutenant governor and the secretary of state is first in line of succession. Symington’s conviction was later overturned.

Hull handily won the 1998 general election for a full four-year term, making her Arizona’s first elected female governor. The state’s first female governor was Democrat Rose Mofford, a secretary of state also elevated to fill a midterm vacancy in the governor’s office but who did not run for a term of her own.

Regarded as a conservative while serving as a legislator, Hull’s tenure as governor included moderate policy initiatives.

“I tried to steer the Titanic a little bit more toward the education of our kids, and I really put the focus on children. Unfortunately a focus costs money and that’s what we did,” Hull told The Associated Press in a December 2002 interview shortly before leaving office.

In her first year in office, Hull won legislative approval of a new school facilities funding program to resolve a decades-long political and legal fight over disparities among districts. She also won approval for subsidized health care for children from low-income families.

Those and other Hull policy initiatives put her at odds with some conservative Republicans, and the former legislative leader was not reticent about using her powers as governor to prod lawmakers. Those tactics included calling the state’s part-time Legislature into special session without first securing support for controversial proposals and vetoing unrelated bills to pressure lawmakers into taking action on her priorities.

In 2000, she got lawmakers to put a sales-tax increase for classroom education on the November ballot, and voters approved it. That issue, like others, saw her triumph despite opposition from some GOP lawmakers.

Hull’s attitude was that if a policy initiative was good for the state, “she had no qualms about fighting even people in her own party,” Jaime Molera, a former top Hull advisor whom she appointed as state superintendent of public instruction, said in a 2019 interview.

Molera recalled that the sales-tax increase got its place on the ballot during a special session that Hull called over the opposition of top GOP legislative leaders.

“She was always there for the educators and for the kids. That will be a long legacy that she leaves behind.”

The special session “lasted a couple of months. But that was Jane Hull. Jane said we had to do it,” Molera said. “Candidly, she knew the power of the office, the responsibilities that it had, but also what you could do with that office.”

Brewer and Hull followed similar paths, with Hull first joining the Legislature in 1979 and Brewer four years later. They both then became secretary of state and were elevated to the governor’s office when their predecessors left office early.

Hull’s successes on policy initiatives didn’t save her from stumbling badly that same year when she signed into law a bill that unexpectedly helped balloon the state’s costs for a subsidy program for alternative-fuel vehicles.

The legislation’s more generous subsidies and a federal rule change supported by the bill’s legislative sponsor resulted in the state’s expected price tag of up to $10 million rising to a feared cost of $680 million. At the urging of Hull and then-Attorney General Janet Napolitano, Hull’s eventual successor, lawmakers made changes that reduced its cost to $120 million.

“I took the blame because the buck stops here, but it was an amendment slipped into a huge bill in the middle of the night,” Hull later told the AP about the process that put the legislation on her desk.

Hull was born Aug. 8, 1935, in Kansas City, Missouri, and she grew up in Kansas, where she graduated from Kansas State University and worked as a school teacher. She married her husband, on obstetrician whose profession took him to the Four Corners region before they settled in metro Phoenix.