The San Diego federal judge overseeing family separation cases against the government has given final approval for a settlement agreement that aims to give certain migrant parents a second shot at asylum.

According to court documents, the agreement focuses on a group of migrant parents who were interviewed about their asylum claims after being separated from their children, and subsequently had their claims denied. The agreement provides them another opportunity to pursue an asylum claim, though it’s not immediately clear how many parents would be affected by the settlement.

The settlement comes about six months after the Trump’s administration’s “zero tolerance” policy led to the separation of more than 2,600 migrant children from their parents at the southwest border.

It’s the latest development in the long series of court hearings about the long process of reuniting those separated children with their parents. U.S. District Judge Dana Sabraw called the settlement a “remarkable bit of work” at a court hearing Thursday, Politico reported.

“It’s not perfect, but we are dealing with a situation that is far from perfect,” Sabraw said.

Here’s a closer look at the terms of the settlement, and who’s still separated from their children.

What the settlement says

Three separate lawsuits against the government, brought by the American Civil Liberties Union and other advocacy organizations, have collectively driven the reunification of migrant children and their families.

After President Donald Trump signed an executive order in June stopping the separations, Judge Sabraw ordered the U.S. to reunite the thousands of migrant children separated from their parents. The same groups suing the federal government have been working with it to correct what’s been described by watchdog groups as a disorganized rollout of a policy change.

A Government Accountability Office report, released last month, found that the government didn’t sufficiently plan for the influx of separated children from their parents because of the “zero tolerance” policy, nor did it properly warn immigration agencies of the change.

There were also personal declarations filed in court that said some parents may have been coerced or misled into waiving reunification rights. In testimonies submitted to the court, the parents also said they were given confusing information about their asylum rights and were in some cases pressured to quickly sign paperwork without an attorney present. Advocates also argued that the separations were traumatic for parents, which made making an asylum claim more difficult.

The government has said that parents waived their right to seek asylum or other protection when they signed an election form, an argument the court rejected.

The settlement will allow parents who initially didn’t pass the “credible fear” interview, which is the first step in the asylum process, to make their case again. If parents do not pass the interview again, the government will allow their children to pursue their own “credible fear” interview. Parents would be able to stay in the U.S. with their children as they go through immigration proceedings. Either way, migrants are able to provide additional information to an asylum officer in the second interview.

The settlement also says if there are discrepancies between evidence presented during this second round and what was provided in the original interview, “due consideration will be given to the psychological state of the parent at the time of the initial interview.” 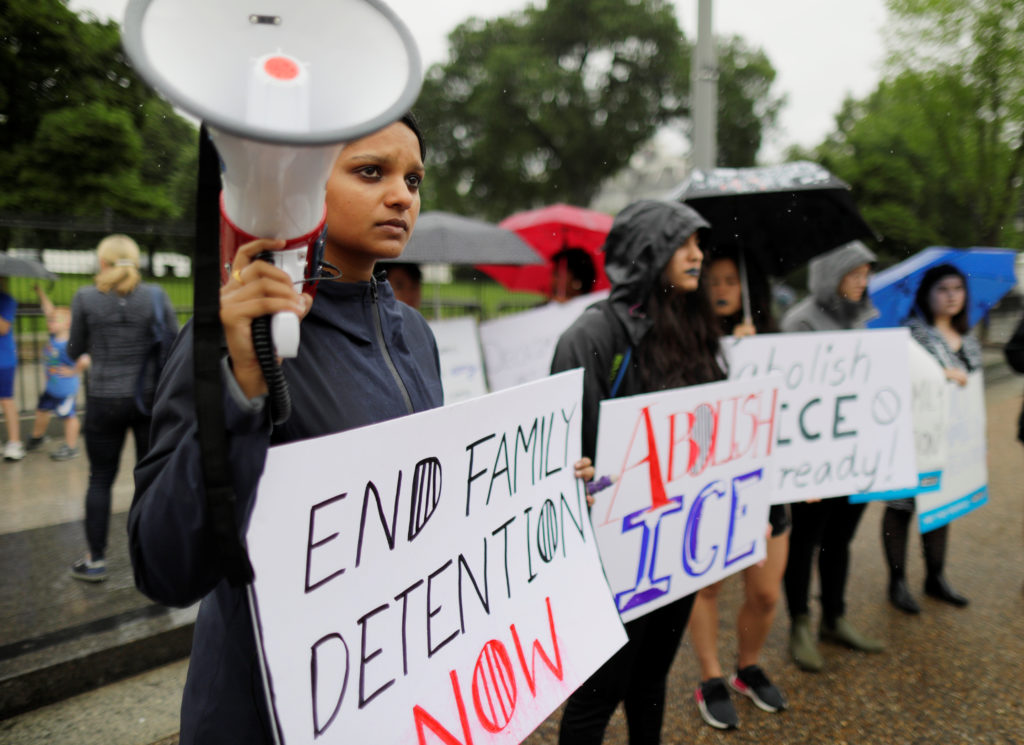 Demonstrator Sara Mathews plays a recording of the cries of illegal immigrant children held in a U.S. detention facility after being separated from their parents during a protest against the separation of immigrant families outside the White House in Washington, U.S., June 22, 2018. REUTERS/Jim Bourg

The settlement focused on one group: Parents who were separated from their children and remain in the U.S. And while the settlement was officially approved this week, some of them have already started to get relief.

The judge agreed to start implementing the settlement about three weeks ago, Simon Sandoval-Moshenberg, legal director of the Legal Aid Justice Center’s Immigrant Advocacy Program, told the PBS NewsHour. As of Nov. 8, the latest court update, 62 separated parents received re-interviews under the settlement.

Sandoval-Moshenberg, who represents some of the plaintiffs, said he couldn’t talk about the results of those re-interviews, but that he’s been pleased with the general success rate.

He also said the implementation of the agreement has been focusing on parents in detention first, but then will shift toward the vast majority of eligible migrants who have been released from U.S. care and are now elsewhere in the country. That will require contacting up to 1,000 migrants.

“Now we have the gargantuan task of finding them” and “convincing them this isn’t a trick,” he said.

Part of the strategy going forward will be working with community organizations and spreading word of the settlement through Spanish-language media in order to reach this group of migrants, Sandoval-Moshenberg said.

However, some groups were not allowed to opt in into the settlement, including parents who agreed to reunite with their children in their home countries and parents who were already deported without their children.

Also not a part of the agreement: “parents with criminal histories or a communicable disease, or those encountered in the interior of the United States.”

This settlement does not mean that every migrant family separated this summer has been reunited.

In October, the administration revised the official total number of separated children in October, saying that after “review of case management records,” 14 separated migrant children were discovered and now added to the count.

A total of 2,667 children were separated from their parents this summer, according to the latest court update. More than 2,450 children have been discharged from government custody.

Twenty-five children remain under U.S. custody and are “ineligible” for reunification. Of those, 18 parents have been deported. A number of other cases remain in which the parents are outside the U.S. and do not wish to reunify, or, children who could not be reunified because their parent is unfit or present a danger, among other reasons.

Left: Anita Areli Ramirez Mejia, an asylum seeker from Honduras separated from her six year-old son Jenri near the Mexico-U.S. border, is reunited with him in Harlingen, Texas, in July. Photo by Loren Elliott/Reuters

For 7 weeks, Sofi begged to go home. Now reunited, her journey isn’t over