OAKLAND, Calif. — Democratic Sen. Kamala Harris, standing outside of Oakland’s city hall, formally kicked off her campaign for the White House by presenting herself as the leader who can best unite an America that is at an “inflection point” and facing a critical question.

“We are here because the American Dream and our American democracy are under attack and on the line like never before,” Harris said Sunday. “And we are here at this moment in time because we must answer a fundamental question: Who are we? Who are we as Americans? So, let’s answer that question to the world and each other right here and right now. America, we are better than this.”

Harris, a first-term U.S. senator from California who announced her candidacy last Monday, rallied thousands of supporters at the Frank Ogawa Plaza in Oakland, her hometown and where she served as a prosecutor before becoming the state attorney general.

READ MORE: What does Kamala Harris believe? Where the candidate stands on 9 issues

Harris invoked the speech that Robert F. Kennedy gave in 1968 when he announced that he would challenge President Lyndon B. Johnson, noting that Kennedy said “at stake is not simply the leadership of our party and even our country, it is our right to moral leadership of this planet.”

Harris added, “So today I say to you, my friends: These are not ordinary times, and this will not be an ordinary election, but this is our America.” 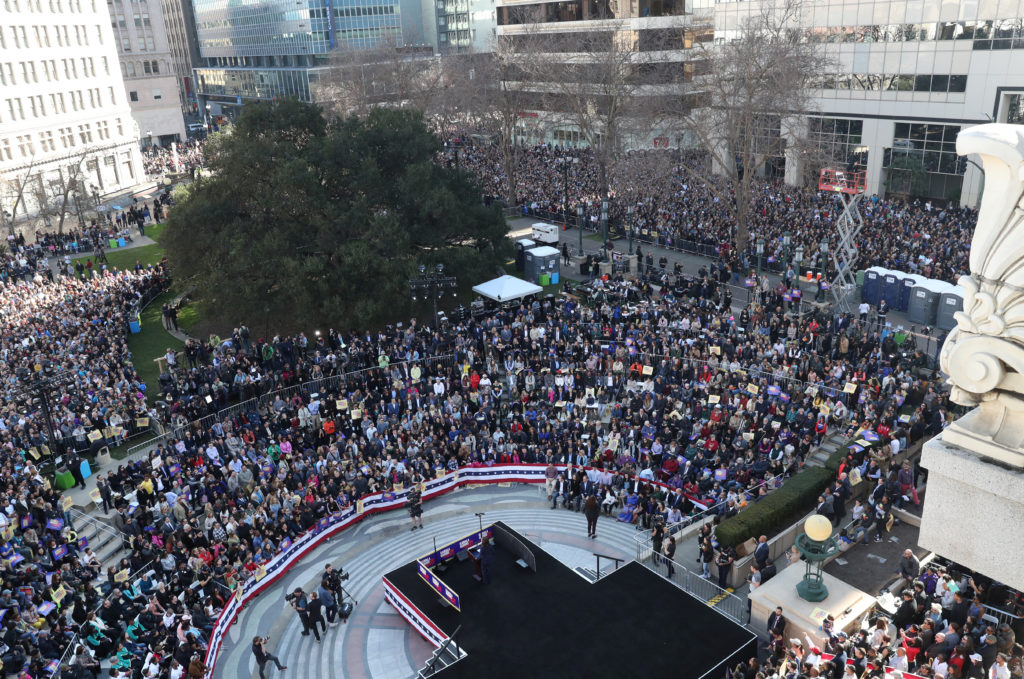 Sen. Kamala Harris holds a rally to launch her 2020 presidential campaign in her hometown of Oakland, California. Photo by Leah Millis/Reuters

Harris’ campaign is filled with historic possibility. If she ultimately wins the White House she would be the first African-American woman and first person of Asian descent to be president.

Harris, the daughter of immigrants from Jamaica and India, said that as she and her sister, Maya Harris, grew up in the East Bay they were “raised by a community with a deep belief in the promise of our country, and a deep understanding of the parts of that promise that still remain unfulfilled.”

She has attributed her decision to become a lawyer and a prosecutor to her upbringing, and said Sunday that she and her sister were “raised to believe that public service is a noble cause and the fight for justice is everyone’s responsibility.”

She said she is running “with faith in God, with fidelity to country, and with the fighting spirit I got from my mother.”

Harris’s launch has drawn heavily on symbolism. She officially entered the race on Martin Luther King Jr. Day. Campaign aides say she has drawn inspiration from Shirley Chisholm, a New York congresswoman who in 1972 became the first black woman to run for president from a major party.

Harris’ first news conference as a candidate was on the campus of Howard University, the historically black college in the nation’s capital that she attended as an undergraduate. On Friday, she was in South Carolina to speak to members of the Alpha Kappa Alpha sorority, of which she is a member. Other members of the group, wearing traditional pink and green, were on hand at Sunday’s rally.

Her choice of Oakland for her campaign launch was both biographical and symbolic. The state of California has played a leading role in resistance to the presidency of Donald Trump. And Oakland itself, where she was born and spent her formative years, has a history of activism. The plaza outside City Hall where Harris spoke once housed Occupy Oakland’s encampment. When Barack Obama ran for president in 2008, he picked the site for his first Bay Area campaign event.

Michael Ahrens, a spokesman for the Republican National Committee, called it “fitting” that Harris chose “the most liberal district in deep-blue California to launch her campaign.”

Harris’ campaign is expected to highlight her career as a prosecutor as part of her rationale for seeking the presidency. Harris was the first black woman elected district attorney in California, as well as the first woman, first African-American and first Asian-American to hold that job.

On Sunday, she said she has long known the criminal justice system to be “deeply flawed” but that she also knew the “profound impact law enforcement has on people’s lives and its responsibility to give them safety and dignity.”

Harris said throughout her life she has “only had one client: the people,” echoing the words she has used in courtrooms and has adopted as her campaign’s slogan.

Harris also did not shy away from taking on Trump directly, saying the U.S. welcomes refugees and calling the wall that Trump wants to build at the southern border a “medieval vanity project” that would not actually stop transnational gangs, which she noted she battled as state attorney general. She also said that, as president, she would “always speak with decency and moral clarity and treat all people with dignity and respect. I will lead with integrity. And I will tell the truth.”

Harris is among the first major Democrats to jump into what is expected to be a crowded 2020 presidential contest.

After the rally, Harris planned to her first trip to Iowa as a presidential candidate. In the weeks before last November’s elections, she traveled to the leadoff caucus state to campaign on behalf of Democrats, and also visited other early-voting states.

Harris’s campaign will be based in Baltimore and led by Juan Rodriguez, who managed her 2016 Senate campaign. Aides say the campaign will have a second office in Oakland.

Left: Sen. Kamala Harris launches her campaign for President of the United States at a rally at Frank H. Ogawa Plaza in her hometown of Oakland, California. Photo by Elijah Nouvelage/Reuters