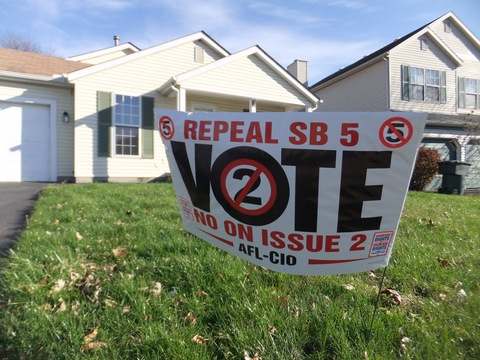 In Ohio, voters overwhelmingly turned back Senate Bill 5, which sought to restrict collective bargaining rights for state public workers. The result was a major victory for labor unions and their Democratic allies — and a rebuke of first-term Republican Gov. John Kasich, who championed the law.

The referendum on the law, which was Issue 2 on the ballot, was defeated 61 percent to 39 percent in a major victory for unions representing the 360,000 public employees whose power the law would have significantly curtailed. And it has given Democrats, who were crushed at the polls in Ohio just one year ago, a surge of momentum heading into next year’s elections.

The outcome gave a boost to labor organizations and Democrats, whose recall effort came up short this summer in Wisconsin, where Republicans have also moved to curb collective bargaining rights for state employees.

“The results tonight are a tremendous victory — not just for Democrats but for all Ohio families,” Ohio Democratic Party chairman Chris Redfern said in a statement. “Voters were asked if they support John Kasich’s anti-middle class agenda and they responded with a resounding ‘NO.'”

For his part, a humbled Kasich said, “It’s clear the people have spoken.” He pledged to re-evaluate how to lead the state going forward.

“I heard their voices. I understand their decision. And frankly, I respect what the people have to say in an effort like this,” Kasich said from the statehouse in Columbus. “And as a result of that, it requires me to take a deep breath and to spend some time to reflect on what happened here.”

In Mississippi, meanwhile, voters blocked an amendment that would have recognized a fertilized egg as a person under the state’s constitution, an effort widely viewed as an attempt to outlaw abortion.

Gary Pettus of the Clarion-Ledger reports:

With about 90 percent of the vote counted, the initiative was headed for certain defeat.

Opponents of the measure argued it would have far-reaching consequences, such as criminalizing birth control and restricting in vitro fertilization practices.

Democrats were able to maintain control of the governor’s office in Kentucky, where Steve Beshear won re-election by a wide margin over Republican state Senate president David Williams despite the Bluegrass state’s conservative leanings and ongoing economic struggles.

Perhaps the most interesting part of Herman Cain’s news conference Tuesday came when he said he fully expects the controversy swirling around his presidential candidacy to continue and that if more charges of inappropriate behavior toward women come his way, he will respond to them.

That’s a far different approach than his weekend scolding of reporters in which he refused to answer questions on the sexual harassment charges and declared that his campaign was back on message.

Cain once again asserted he has done nothing wrong. “I have never acted inappropriately with anyone. Period,” he said, adding that he did not recognize or remember Sharon Bialek’s name when he watched her come forward publicly on Monday to charge him with harassment.

Shortly before Cain went in front of cameras, one of the initial anonymous women whose complaints came to light in a Politico story 10 days ago emerged publicly for the first time.

The New York Times has more:

Ms. Kraushaar, 55, who now works as a spokeswoman for one of the three inspectors general at the Treasury Department, told The New York Times: “When you are being sexually harassed in the workplace, you are extremely vulnerable. You do whatever you can to quickly get yourself into a job someplace safe, and that is what I thought I had achieved when I left. . . ”

. . .In a brief interview, Ms. Kraushaar sounded nervous, if resigned, after news that an online publication, The Daily, had revealed her identity — breaking with other news organizations that had been withholding her name out of privacy concerns. She is the second woman to go public with her accusations; two others remain anonymous.

Joel P. Bennett, the lawyer for Ms. Kraushaar, said late Tuesday that he was seeking to coordinate with the other women and their lawyers. “My client has decided to hold a joint news conference with as many of the women who complained of sexual harassment by Herman Cain as will participate,” he said.

Ms. Kraushaar said that she had hoped to stay anonymous and that she remained hesitant to share more of her account out of fear of her safety — as well as for the sort of vitriol sometimes directed at women who accuse powerful men of harassment. She said she believed that if all the women were to appear together to provide more details of their experiences with Mr. Cain, the accounts could “be considered together as a body of evidence.”

Cain will no doubt face more questions about this controversy Wednesday night, when the eight candidates for the GOP nomination gather for their first debate in three weeks outside of Detroit at 8 p.m. ET on CNBC.

In interviews yesterday with ABC News and Yahoo!, several of Cain’s competitors said the allegations were serious. Front-runner Mitt Romney called them “disturbing.” It’s hard to imagine, however, Cain’s opponents going any further than those comments while standing next to him on the debate stage.

The Cain operation is now trying to transform itself into two simultaneously run campaigns. The first is the presidential campaign, for which a new ad is running on Fox News in Iowa and volunteers are calling supporters in the first-in-the-nation state to assuage any concerns they may have after seeing the news reports over the last 10 days.

The parallel campaign is the one aimed at destroying the credibility of his latest female accuser, bashing the media for its treatment of the allegations and denying any inappropriate behavior by Cain.

Cain now needs to hope no documentation or evidence emerges that calls into question his denials of wrongdoing. He will also likely have to sit back and watch another media spectacle news conference when all of his female accusers join forces to tell their stories collectively. As he clearly indicated Tuesday in Arizona, he’s well aware that he’ll be speaking about these issues again soon.

The ad pits former President Bill Clinton against Mr. Obama on the issue of taxes, using each of the Democratic presidents’ own words, albeit out of context due to some clever editing.

Clinton is seen in an October appearance on CBS’ “Late Show” with David Letterman, saying that nobody’s taxes should be raised right now. The bite doesn’t, however, include the next sentence from Clinton in which he supports President Obama’s plan to raise taxes on the wealthiest Americans once the economy gets on sturdier ground.

The ad comes as Clinton is making media appearances and traveling the country on a tour selling his latest book.

American Crossroads has promised to spend at least $240 million on the 2012 election season and has President Obama’s defeat as its primary goal.

You can watch the ad here:

Michigan is getting a preview Wednesday of what a general election matchup between President Obama and Romney would look like.

Romney, who will be in Rochester for Wednesday’s Republican presidential debate, is being greeted Wednesday morning by a Democratic National Committee ad in the Detroit News and the Detroit Free Press.

Politico’s Mike Allen has the link in his “Playbook.”

The ad asks, “If he [Romney] had been president, where would our economy — and Detroit — be today?”

“In Detroit, the city of my birth, far higher joblessness has brought a great city to the edge of ruin. There will be no one on that stage this week more pained by Michigan’s struggles than I am,” Romney writes.

“President Obama inherited an economy in crisis. He proceeded to make it worse.”

Which of those two arguments Michiganders believe will be a major factor in determining which party carries the state next year.