Sen. Lieberman to Bow Out, Will Not Seek Re-Election in 2012 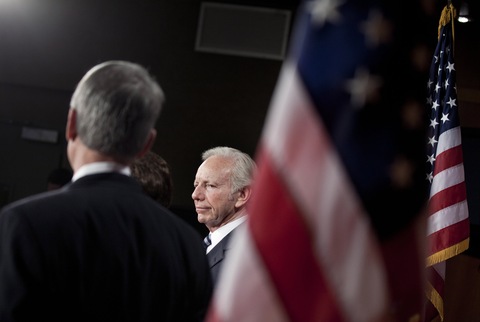 Sen. Joseph Lieberman, I-Conn., was first elected to the Senate in 1988. Photo by Brendan Smialowski/Getty Images.

Updated at 1 p.m. ET | Sen. Joe Lieberman, I-Conn., confirmed Wednesday that he will not seek re-election in 2012 and will retire after finishing his fourth term.

Accompanied by his wife, children and grandchildren at a midday news conference, he reflected on his Senate career, which began in 1988. Lieberman thanked Connecticut voters for the “extraordinary opportunities” that came with serving in the Senate, and touted work on environmental issues, business in his home state and defense. He described himself as a politician who had never fit into “conventional political boxes,” a nod to his famous switch from Democrat to independent.

Lieberman said retiring was “not an easy decision,” but that he was excited about beginning a “new chapter” in his life.

Original post | Sen. Joseph Lieberman, I-Conn., has had one of the more fascinating career trajectories of any modern political leader.

Wednesday, he plans to bring that phase of his career to a close. According to several Democratic sources, Lieberman plans to announce that he will not seek re-election in 2012. He is expected to make his announcement at 12:30 p.m. ET in Stamford, Conn.

In an eight-year span, Lieberman went from being tapped as Al Gore’s vice presidential running mate on the 2000 Democratic ticket to seeking a presidential nomination himself to endorsing Republican John McCain for president and nabbing a high-profile speaking slot at the 2008 GOP convention.

Somewhere in that span, he received a fateful kiss from an unpopular president.

The very same Democrats who grumbled when Gore put Lieberman on the ticket and who were outraged when he backed McCain were likely the same people cheering his shepherding the passage of the ‘Don’t Ask, Don’t Tell’ repeal to President Obama’s desk.

All of those partisan twists and turns have left Lieberman a man without a political base, which made his 2012 re-election contest an extraordinarily daunting proposition.

He wouldn’t have Karl Rove and George W. Bush tamp down real Republican competition this time around, as he did in 2006 when he won re-election as an independent with 70 percent of state Republicans voting for him. And Democrats in the Nutmeg State had already come out of the woodwork making their intentions to run for the seat quite clear.

From the New York Times: “‘He believes that if he were to run for re-election it’d be a tough fight,’ said Marshall Wittmann, a member of Mr. Lieberman’s Senate staff. ‘He’s confident he could’ve won that fight. He’s had tough fights before. But he wants to have a new chapter in his life.'”

Lieberman’s retirement comes on the heels of Sen. Kent Conrad’s decision to avoid a tough re-election campaign. Democrats will have an incredibly difficult time keeping that North Dakota senate seat on their side in 2012. However, Lieberman’s retirement is expected to make that seat a bit safer for a Democratic hold in Connecticut.

When AFL-CIO President Richard Trumka takes the stage Wednesday morning at the National Press Club in Washington, D.C., to discuss the state of the union through labor’s eyes, he will not spare his Democratic friends from criticism.

“We have a jobs crisis that after three years is still raging, squeezing families, devastating our poorest communities and stunting the futures of young adults. Yet politicians of both parties tell us that we can — and should — do nothing,” Trumka is expected to say, according to excerpts of his remarks released by his office.

“In this topsy-turvy world, the same leaders who fought so valiantly to cut taxes for the wealthy turn right around and lecture us about the imminent bankruptcy of Social Security and Medicare.”

The talk of unsustainable budgets with rising pension costs and a bloated labor force in every new governor’s inaugural addresses has not gone unnoticed by Trumka.

“In state capital after state capital, politicians elected to take on the jobs crisis are instead attacking the very idea of the American middle class — the idea that in America economic security — health care, a real pension, a wage that can pay for college — is not something for a privileged few, but rather what all of us can earn in exchange for a hard day’s work,” he plans to say.

As anyone who watched Andrew Cuomo and Jerry Brown’s inaugural addresses knows, those words are not just directed at traditional labor opponents such as Wisconsin Gov. Scott Walker and Ohio Gov. John Kasich.

REPEAL DAY IN THE HOUSE

Republicans pledged during the 2010 campaign to repeal the health care bill enacted last spring, and by Wednesday evening it’s almost certain the House will have passed a bill to do just that.

That’s when the repeal effort will hit its first roadblock. Senate Majority Leader Harry Reid, D-Nev., has said his party will oppose any repeal effort in the Senate, where the party still controls a 53-to-47 majority.

On Tuesday, House Majority Leader Eric Cantor, R-Va., dared Reid to allow a vote on the repeal bill in the Senate. “If Harry Reid is so confident that the repeal vote should die in the Senate then he should bring it up for a vote,” Cantor told reporters.

For his part, Reid didn’t seem particularly swayed by that argument. “This is nothing more than partisan grandstanding at a time when we should be working together to create jobs and strengthen the middle class,” said Reid in a statement released Wednesday.

A final vote on repeal in the House is expected to come by 6:30 p.m. ET Wednesday. For a preview of what the debate will look like, you can watch Judy Woodruff’s conversation with Reps. Dan Lungren, R-Calif., and Anthony Weiner, D-N.Y., from Tuesday night’s NewsHour.

Rep. John Boehner, R-Ohio, has only been Speaker of the House for two weeks, but so far he has to be pleased with the results, at least when it comes to his approval ratings.

According to a USA Today/Gallup poll released Tuesday, Boehner’s favorable rating now stands at 42 percent, a 15-point improvement since last fall. The survey finds that 22 percent of Americans views the Republican unfavorably.

Despite his new high-profile position, and the fact that he had a good deal of Democratic criticism thrown at him during the 2010 midterms, one in three Americans are still unfamiliar with Boehner.

The rise in Boehner’s favorable rating has come from across the political spectrum, with the biggest gain witnessed among Republicans, with 65 percent now viewing him positively, compared with 46 percent in the fall. Boehner’s favorable rating among Independents is 39 percent (up from 23 percent) and 25 percent among Democrats (up from 15 percent).

Gallup notes that Rep. Nancy Pelosi, D-Calif., experienced a similar boost in her approval rating when she was elevated to speaker following the 2006 midterm elections, although those numbers quickly declined. The minority leader is now rated favorably by 33 percent of Americans, while 54 percent view her unfavorably.