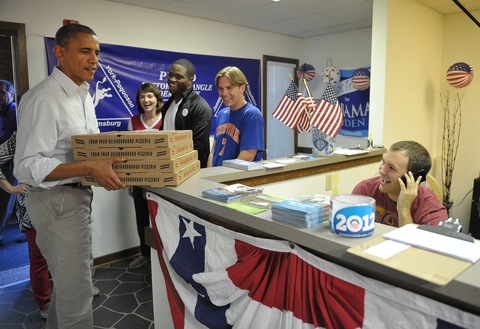 President Obama delivers pizzas to a campaign office in Williamsburg, Va., in a visit Sunday with workers. Photo by Mandel Ngan/AFP/Getty Images.

With just over three weeks to go, it would be tough for this presidential race to get any tighter.

Fresh polls show President Obama holding a lead within the margin of error over his Republican rival Mitt Romney and with little breathing room in some key swing states.

The former Massachusetts governor has made up critical ground when it comes to likability, an issue he had to improve upon to win. Past surveys had shown Romney was the least likable GOP nominee in history.

A new Washington Post-ABC News poll found Mr. Obama leading Romney, 49 percent to 46 percent, among likely voters with a 3.5 percent margin of error. That survey indicated that just barely one in eight voters is undecided or considering changing his or her mind.

The biggest shift is among Romney backers who now have more enthusiasm for the Republican nominee, with 70 percent telling the pollster that the first debate made them think more highly of Romney.

The improvement in views of Romney carries directly into the underpinnings of his support: Fewer of his supporters now express anxiety about a Romney administration, and the number of his backers saying they support him “very enthusiastically” jumped by double digits. Among the likely voters supporting Romney, 62 percent now do so intensely, exactly double the number who were eagerly lined up behind Republican nominee John McCain at this stage in the campaign four years ago.

Meanwhile, enthusiasm for the president has also ticked higher, but it remains below where it was four years ago. Of course, at this time in October 2008, Obama held a 10-percentage-point lead over the Republican senator from Arizona. In the new poll, a three-point edge does not represent a statistically significant advantage.

Beyond enthusiasm, Obama lags behind 2008 in assembling a winning coalition because groups of voters highly likely to back his candidacy — including Democrats, non-whites and younger voters — are far less interested in the campaign this time around.

Deep into the article is an interesting statistic that emphasizes the grassroots activity in swing states. They write: “About 37 percent of voters in the eight key states — the seven Post ‘tossup’ states plus Ohio — say they’ve heard from an Obama campaign representative in the past month; 27 percent in those states say they have been contacted by one of Romney’s.”

A Politico/George Washington University battleground poll of likely voters conducted last week found the president leading Romney, 49 percent to 48 percent. That’s made possible by an eight-point lead among independents. The survey had a 3.1 percent margin of error.

“Obama and Romney are now essentially tied on likability: 53 percent of those surveyed have a positive impression of Obama personally, and 45 percent do not. The same number view both Romney and Obama strongly favorably as view them strongly unfavorably,” writes James Hohmann.

Public Policy Polilng released two new battleground state surveys over the weekend. The left-leaning pollster’s automated survey found a five-point gain for Romney in Florida, where he topped the president, 49 percent to 48 percent, and a small boost for the Republican in North Carolina, where he led, 49 percent to 47 percent.

“This now makes 26 out of 27 times polling the race in North Carolina that PPP has found Obama and Romney within three points of each other,” PPP wrote.

As both men hunkered down for the final stages of preparation for Tuesday’s debate, Team Obama released a nasty memo attempting to define the race on its terms. Campaign manager Jim Messina focused on Romney’s changing positions:

The real Mitt Romney has been running on his “severely conservative” positions for years, but now – just weeks before Election Day – he’s trying to hide them because they’ll hurt the middle class and his chances of winning.

We saw this clearly in the first presidential debate on Oct. 3, as Governor Romney cynically and dishonestly hid the self-described “severely conservative” positions he’s been running on – and there’s no doubt he’s memorizing more deceptions as he prepares for Tuesday’s second debate.

The rest of the memo includes “sample” Q-and-A’s from voters to tee up the town-hall-style debate forum. Read the memo in full here.

The NewsHour took a look Friday at how both campaigns are seeking to win over female voters and examined reaction to the debate between Vice President Joe Biden and Rep. Paul Ryan. We started here with a debate wrap, and then Jeffrey Brown talked with two pollsters, Celinda Lake on the left and Kellyanne Conway on the right.

And I think that Biden was very strong when he said this is not a decision — it’s personal decision. It is not a place that politicians and governments should interfere.

The other thing you saw very, very strong among women voters for the Democrats was the strong statement about the middle class. Women don’t want to hear a bunch of statistics, a bunch of acronyms. They want to know, what are you doing to help my family? How are these economic programs going to create jobs in my community, create higher-wage jobs for my husband and myself, or my partner, and give our children a future?

It is absolutely correct that the next president and vice president will be decided ultimately by women.

But it’s absolutely a false premise to believe that there are — quote — “women’s issues,” and that they all have to do with, you know, waist down. What about waist up, where our brains and our hearts and our eyes and our ears are?

And I think 2010 really proved it. That’s where, two short years after 56 percent of women gave a stratospheric — Barack Obama, 56 percent of the vote was unheard of for a non-incumbent.

The pollsters quipped after the segment that they “need a sequel” to the 2005 book they co-wrote, “What Women Really Want.”

Watch the full conversation here or below:

NewsHour online politics production assistant Meena Ganesan rounded up the most popular search terms during the vice presidential debate. Here’s a hint: How old are Biden and Ryan?

“Joe Biden in October made the case for Barack Obama and his record and his administration better than Barack Obama has,” Shields said.

Brooks reiterated his skepticism of the performance, however. “If anybody came on the NewsHour and behaved the way Biden did, we would kick them off in the middle of the set. It is just not what discussions should be like,” he said.

He also called on Romney to continue his push toward bipartisanship and for President Obama to “lay out more of a division” on Tuesday.

Watch their chat with Judy here or below.

Doubleheader here or below.

The fighter of the Senate lost his last fight Sunday. Former Pennsylvania Sen. Arlen Specter died at age 82 after years of battling illnesses. Remembered as a statesman by colleagues far and wide on Sunday, Specter leaves behind a legacy of coalition-building during an era of hard-scrabble politics that allowed him to escape partisan pigeon holes.

The NewsHour resurfaced this video of Specter in a 2005 interview with Gwen Ifill, in which she pressed the then-Republican judiciary committee chairman on his often-controversial stances during Supreme Court nomination hearings. The interview fell on the eve of future Chief Justice John Roberts’ time before the Senate.

Philly Mag’s 2006 “Oral History of Arlen Specter” is also worth a read as it asks the statesman’s friends and colleagues what made the man so “Specterian”.

-Questions about Tuesday’s presidential debate? Christina will answer them in a Twitter chat Monday at 2:30 p.m. ET. Use the #pbselection hashtag.

From pool report: A reporter yelled, “How is debate prep going?” Potus: “It is going great!”

On The 12: Republicans lose registration lead in Colorado in last month of registrations tmblr.co/ZmYRJvV8qmhm

Hitting the campaign trail again in Norfolk,VA to get out the vote!! Are you registered? Gottavote.com twitter.com/ReggieLove33/s…

Another weekend. Another stop on the trail. #masen #pbselection twitter.com/pbsgwen/status…