On an explosive day in Washington that saw President Donald Trump’s former personal lawyer call him a racist and a con artist during a congressional hearing, one exchange between Rep. Mark Meadows, R-N.C., and Michael Cohen stood out: The lawmaker called up a black former Trump Organization employee as evidence that the president harbors no racial bias.

Cohen’s opening statement at a hearing of the House Oversight and Government Reform Committee, during which he called Trump a “racist” and recalled numerous instances where his former boss had made bias remarks, sparked the back-and-forth.

“The country has seen Mr. Trump court white supremacists and bigots,” Cohen said. “You have heard him call poorer countries s**tholes. In private, he is even worse. He once asked me if I could name a country run by a black person that wasn’t a sh**thole. This was when Barack Obama was president of the United States.”

Cohen added, “While we were once driving through a struggling neighborhood in Chicago, he commented that only black people could live that way. And, he told me that black people would never vote for him because they were too stupid.”

About an hour and a half into the hearing, Meadows responded to those comments by announcing that he had invited a guest to the hearing: Lynne Patton, a close friend of the Trump family who worked on the president’s campaign and now heads the Department of Housing and Urban Development’s New York and New Jersey office.

“I asked Lynne to come today in her personal capacity to actually shed some light,” Meadows said.

Cohen quickly explained that he had helped Patton get a job with the Trump Organization and encouraged her to take a job with HUD.

Then, with Patton standing silently by his side, Meadows moved to make his point and presented her as a character witness for the president.

“You made some very demeaning comments about the president that Ms. Patton doesn’t agree with,” Meadows said to Cohen. “In fact, it has to do with your claim of racism. She says that as a daughter of a man born in Birmingham, Alabama, that there is no way that she would work for an individual who was racist. How do you reconcile the two of those?”

Cohen shot back, “As neither should I, as the son of a Holocaust survivor.” 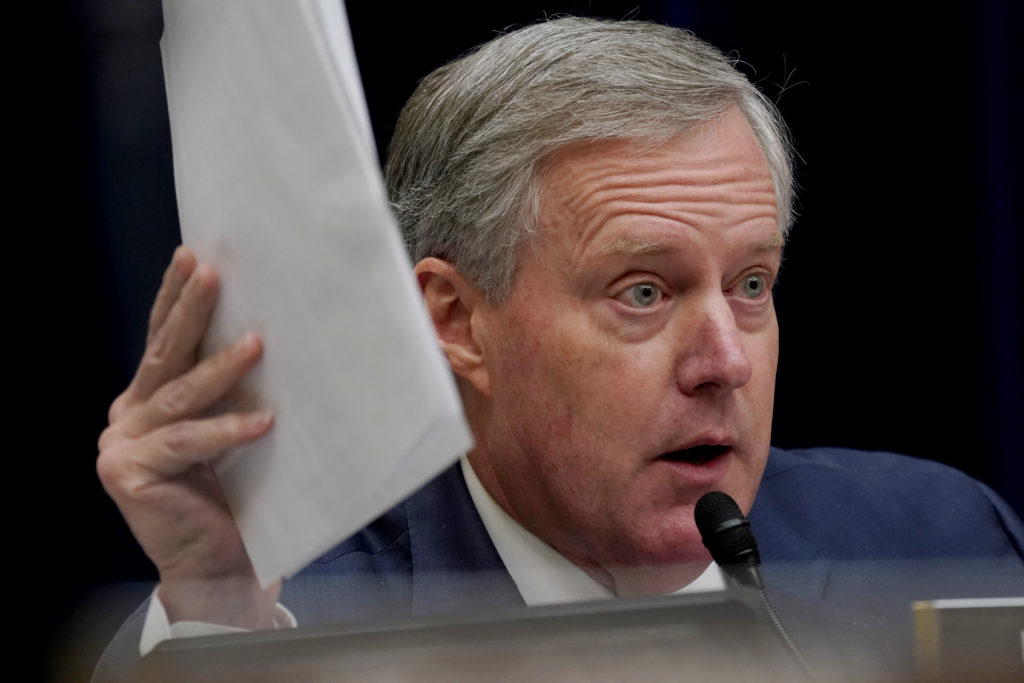 Meadows then said he had spent time with Trump and had never heard him any racist remarks. “How do you reconcile that?” the lawmaker said.

Cohen, looking frustrated, said, “Ask Ms. Patton how many people who are black are executives at the Trump Organization? The answer is zero.”

The exchange immediately drew attention on social media and the firestorm continued when several Democrats on the committee criticized Meadows’ actions.

“Having endured the public comments of racism from the sitting president, being a black person, I can only imagine what is being said in private,” Lawrence said. “To prop up one member of our entire race of black people and say that that nullifies that is totally insulting.”

Later, Rep. Rashida Tlaib, D-Mich., accused Meadows of using Patton as a “prop” and that doing so was a racist act, leading to a heated exchange between the freshman lawmaker, Meadows and the committee chairman, Rep. Elijah Cummings, D-Md.

Patton defended Trump in an interview with PBS NewsHour hours after she attended the hearing, saying she had showed up to send a message that Cohen was lying and unfairly trying to misrepresent the president.

“What I find insulting is that there is someone who is getting up there and being credible when he’s going to jail for lying to Congress,” Patton said. “I find it insulting that President Trump isn’t getting credit for all he is accomplishing.”

She said her appearance had nothing to do with her race. “Today was not about the color of my skin,” she said. “Today was about two people who know the president equally and who disagree about the way he is being characterized.”

Patton added that during her time with the Trump Organization she saw the president “empower” women and people of color around him.

“The president sees successes and failures,” she said. “He doesn’t see color, sex race, creed, religion, so that’s what makes things uncomfortable for other people. It could a country, a business, a television show, a restaurant, you’re either successful or you’re not.”

Left: Lynne Patton at the Republican National Convention in Cleveland, Ohio, on July 20, 2016. Her appearance at a congressional hearing with Michael Cohen on Wednesday sparked a debate about President Donald Trump's comments about race. File photo by REUTERS/Jim Young