A doctor back from the front lines of the Ebola epidemic in west Africa will sit with first lady Michelle Obama during the president’s State of the Union Address on Tuesday.

Dr. Pranav Shetty is the global emergency health coordinator for the nonprofit International Medical Corps, which the White House called “a critical partner in the U.S.-supported effort to bring the Ebola epidemic under control in west Africa.” He will join nearly two dozen other strategically selected guests in the first lady’s box, including a 13-year-old who wrote a letter asking Santa Claus for safety, an astronaut and a man who spent five years behind bars in Cuba. Each personifies a key piece of the president’s agenda; most are expected to be mentioned or shown during important applause points in the president’s speech.

Shetty — who will likely signify the Obama administration’s continuing commitment to ending the outbreak — deployed to Liberia last August to help establish and oversee two Ebola treatment units and a training center for health care workers. He arrived back in the U.S. in December.

The PBS NewsHour caught up with Shetty at a breakfast honoring Ebola health care workers at the U.S. Capitol on Tuesday. Hosted by the Paul G. Allen Family Foundation and its #TackleEbola Campaign, the event highlighted the need for sustained investment from the international community and paid tribute to a number of famous survivors of the epidemic, including Dr. Kent Brantly and Nancy Writebol, American health workers who contracted the virus in Liberia and were successfully treated in the United States.

Afterward, Shetty told the NewsHour he’s “cautiously optimistic” about the current international response and shared some thoughts on how the world can achieve “zero new infections” in the coming months. He also described what he expects to find when he travels to Guinea — another Ebola hotspot in west Africa — later this week.

Watch a clip from the interview above, and read the full transcript below. 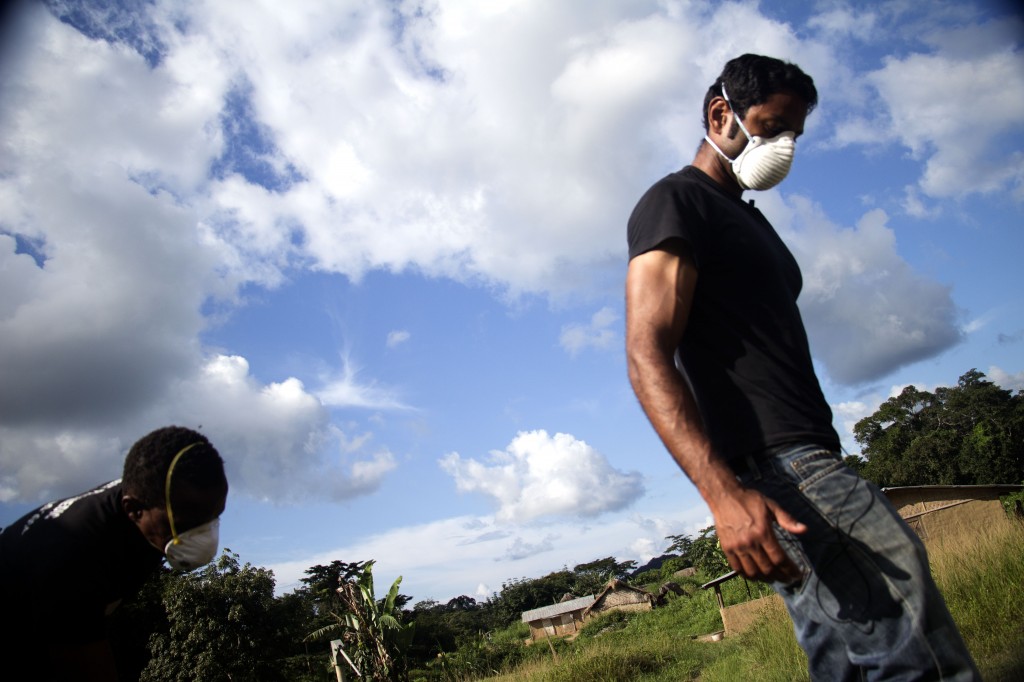 PBS NEWSHOUR: How would you assess the current international response to the Ebola crisis?

DR. PRANAV SHETTY: Well I think the international response has gone through stages since the beginning — since the middle of last year. It’s certainly ramped up very quickly. We’re in a stage now that we’re at kind of the cautious optimism stage. We’re very much aware that we really need to get to zero cases to get to the end of this outbreak. And campaigns like the #TackleEbola Campaign really keep the attention there that needs to be there to fund and support the overall response. There’s also the sense that we can’t be complacent at this time. So really, what our strategy now is is to focus on our successes and build up those until we get to zero cases in the region.

PBS NEWSHOUR: What needs do you feel aren’t being met on the ground?

DR. PRANAV SHETTY: Well I think the needs are shifting. The focus on the response now needs to focus more on one of preparedness and health system strengthening for the future. I think we know that in this age of globalization and emerging infectious diseases, something like this epidemic could surface again in any region in the world, and especially in west Africa, where the health systems are inherently weak. So the response now needs to turn to one of preparedness. And strengthening the health system to deal with these types of crises in the future.

DR. PRANAV SHETTY: There are a lot of components to a health system, and when we talk about health system strengthening in general, there are a lot of different pillars that needs to fall upon. I think we need to focus on health worker training in the region, to make sure people are educated and aware of these types of illnesses, so they can be recognized sooner. I think we need to work on surveillance systems, so cases are detected early and identified early so they can be taken care of. And then we also need to work on the back end, with the care of patients, because if we can provide good care to patients, then the trust will be there in the community, within their health system and within their own authorities and their health systems. So it’s a very kind of broad range or response that really needs to be a concerted effort to make sure that it moves forward as one movement or one piece.

PBS NEWSHOUR: Zero new infections seems like an ambitious goal in the short-term. How long do you think that’s going to take?

DR. PRANAV SHETTY: The length of time is difficult to predict. The focus now needs to be on moving forward as aggressively as possible, and really building off the gains that have been had in the past few months. To get to zero cases, we just need to focus on the pillars of the response that we had been focusing on. As an international community, as a national community, as a public health system, as humanitarian workers, we know what to do and we’re focusing on how to do that most effectively. The pillars of responsibility include early case finding and case detection, case identification, isolation and treatment of those cases, the surveillance part — which is the contact tracing and making sure cases are identified as soon as possible, working on burials to make sure that burials are done in a safe and dignified fashion, and all underpinned by a social mobilization and community engagement. Because these cases start in the community, and to address these types of issues, it has to be community-led and community-driven. And with that package of interventions, we will get to zero cases, as we have in every ebola outbreak in the past.

PBS NEWSHOUR: What do you expect to find in Guinea. You’re going there later this week, correct?

DR. PRANAV SHETTY: I think the setting for each Ebola outbreak is different. It’s different in every country. There are different social factors and cultural factors that have allowed Ebola to spread in each of these countries. And so I think what we need to do is we know the pillars of our response. As International Medical Corps, we are focused on those pillars in the best way that we can. And I think that it’s adapting this response to the particular context. And so what we expect to find is a different situation than we saw in some of the other locations I’ve been. And we’ll do the best we can to address the issues as effectively as possible.

PBS NEWSHOUR: And finally, you’re going to be sitting with the First Lady tonight. What do you hope the president is going to say about the Ebola crisis?

DR. PRANAV SHETTY: I hope that the administration recognizes the value of their contribution so far. I think without this huge intervention on the part of the United States government, and USAID, we would not be at the stage we are now, which is the optimistic stage. We see the end in sight, and we really want to work towards that. And I really hope that the administration focuses on continuing the effort, making sure that we aren’t complacent and that this is the time to really ramp up as much as possible and stamp out the remaining cases to get to zero.