Millions of Americans are receiving relief payments this week, but who is being left out?

Last month, Congress passed a historic $2.2 trillion aid package aimed at easing the financial burden facing state governments, businesses and American families during the coronavirus pandemic. As part of this legislation, the majority of Americans are eligible to receive one-time cash payments — $1,200 for most — but for some, accessing those funds is a confusing and complicated process, while others were completely left out of this part of the relief plan.

According to the Treasury Department, more than 80 million people will receive their “Economic Impact Payments” this week through direct deposit.

But tens of thousands of the country’s most vulnerable residents will not receive this form of financial assistance this week — or, in some cases, at all. Undocumented immigrants and adult dependents don’t qualify. Lower income individuals and those with disabilities will, in some cases, face extra hurdles in seeking to claim the money. And inconsistent communication about the legislation from lawmakers and the U.S. Department of Treasury has raised questions over who exactly qualifies for the relief and why certain groups are left out.

The Treasury Department has not provided an estimate of how many individuals or households in total are expected to receive payments. A key requirement for the majority of recipients is to have filed taxes for at least one of the last two years.

It’s sort of like I’m under the radar. Without paying taxes to anything, they don’t know who you are. They don’t know you exist.”

Experts say the tax return system offers one of the largest avenues for the government to disburse relief money because it usually contains updated financial and contact information for most U.S. residents. And because eligibility for the payments is based on income, tax returns help the government identify who should receive a relief check.

While tax filings are being used to determine who receives payments, not everyone who qualifies for aid files taxes. Philadelphia resident Robin Bicoff, 54, says she hasn’t worked a paying job since January 2018 when she became a full-time caretaker for her 90-year-old father after he had a heart attack. Bicoff did not file taxes in that time, and initially believed this disqualified her from receiving a relief check. “It’s sort of like I’m under the radar. Without paying taxes to anything, they don’t know who you are. They don’t know you exist,” Bicoff said.

Bicoff, who does qualify for the relief money, decided to submit a tax return with the hope of receiving the $1,200 payment. She listed an income of about $20 from a festival she worked in 2018.

An estimated 20-30 million people in the United States do not file federal income taxes. That includes millions of people whose incomes are below the $12,200 annual threshold to require they file taxes. Many recipients of government programs like Social Security, veterans benefits and disability insurance also may not be required to file taxes. In order to receive a payment, however, some of these non-filers will need to still submit information to the IRS.

In an attempt to help eligible non-filers claim their money, the IRS established an online form where they can enter their addresses, banking and other financial information in a more simplified way, rather than attempting to file a standard tax return as Bicoff did.

A source of confusion in the policy’s rollout stems from ambiguity about who needs to take additional steps before receiving any money. Three days after the measure passed, the Treasury Department said Social Security retirement recipients would have to file a “simple” return despite an exemption written into the law.

Kelly Phillips Erb, a tax attorney who runs the website Taxgirl.com, said she had received hundreds of emails from people with questions about their eligibility and about whether they will lose existing benefits by claiming the money — which, she said, they won’t.

“I’m generally not a fan of using the tax code to administer social policy. … I do think this could have been thought out better,” Erb said. “You don’t know when a major economic crisis is going to happen, but you know that there’s a possibility you might have to do something like this.” 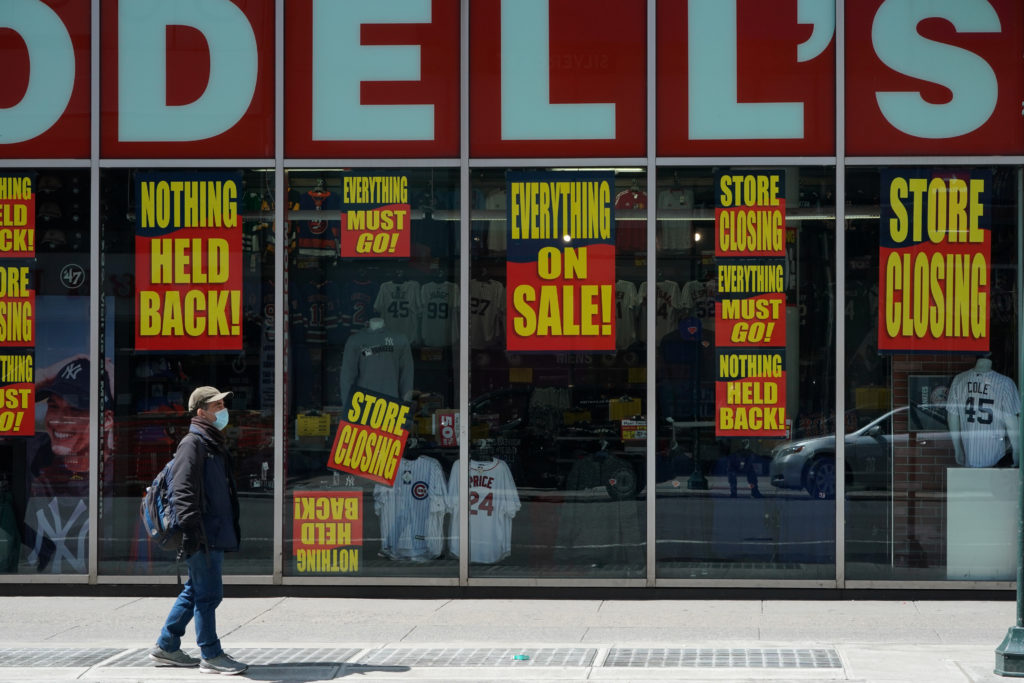 A man stands in front of a Modell’s store that is closed, as retail sales suffer record drop during the outbreak of the coronavirus disease (COVID-19) in New York City, New York, U.S., April 15, 2020. REUTERS/Bryan R Smith

Among those who will need to submit information to the IRS’ web tool in order to receive the payment are low-income non-filers and veteran beneficiaries, though the department said it is working to secure fast payment to vulnerable groups. The department added that its online form should only take these non-filers a few minutes to fill out.

But even this won’t close the gap for many low-income or homeless people, said Anne Price, president of the Insight Center for Community Economic Development.

“About 8.4 million households lack a banking account and 20 million are currently without home access to broadband because they simply can’t afford it,” Price said.

Unbanked and underbanked rates are higher among lower-income, less-educated and younger households, working-age disabled households, black and Hispanic households, and households that already have “volatile” incomes that “vary somewhat or a lot from month to month,” according to the report.

Amid a pandemic, in-person tax preparation services, libraries with internet and other resources that might usually be available to assist these groups have been closed. Possible remedies could include working with state and local government agencies to get information on non-filers, or distributing prepaid debit cards instead of checks and direct deposit, some economic experts said. Waiting for a relief payment in the form of a paper check will take longer, possibly months.

It highlights the very specific failures of the American social safety net.”

Beyond the potential challenges for those who are eligible in accessing the coronavirus aid, there are still others who have been completely left out and aren’t eligible. Adults claimed as dependents, including many students and people with disabilities, will not receive anything. Parents or guardians who claim adult children on their taxes also will not receive the $500 credit provided to those with children under 17. On social media platforms, many are expressing their frustration with the decision to omit them.

“It highlights the very specific failures of the American social safety net,” said Jarod Majeika, 20, a student at the University of Southern California. “It’s disappointing beyond measure to me that sending one-time $1,200 checks to Americans — and not even all Americans — is the best [lawmakers] could come up with.” Majeika is claimed on his mother’s taxes, but has lost one of his two campus jobs because of school closures and can no longer afford his rent.

Yazmin Franco, 25, came to the U.S. from Mexico as a child, but is temporarily protected from deportation under the Obama-era Deferred Action for Childhood Arrivals program. Some DACA recipients like Franco who have social security cards are eligible for payments; Franco’s parents, however, are among the estimated 11 million undocumented immigrants in the United States who aren’t eligible for the payment. Franco’s mother was recently laid off from a grocery store position, and her father also lost his job as a landscaper due to the pandemic. In addition to daily living expenses, Franco’s father has to pay for insulin to treat his diabetes without health insurance. “Having an underlying condition like my dad does, it’s such a horrible feeling to not be sure what would happen to him if he were to get sick with the coronavirus,” Franco said.

The legislation excludes “any nonresident alien” foreigners from receiving money. The law also denies the money to eligible taxpayers who either file a joint tax return with an undocumented person or claim an undocumented child, said Francine Lipman, a tax expert and professor with the University of Nevada, Las Vegas School of Law.

Many noncitizens who work and pay taxes, including undocumented immigrants and those with legal work visas, have lost jobs as a result of the pandemic. H-1, TN, and O-1 work visa holders are considered resident aliens and can receive aid only if they’ve been in the U.S. long enough to meet the “substantial presence” test. 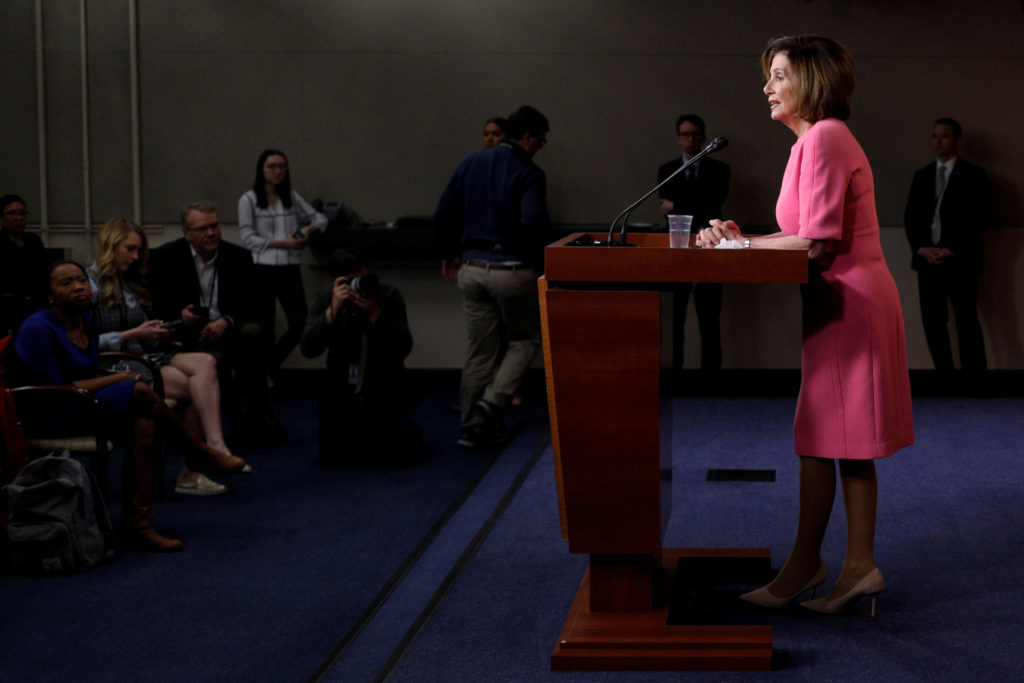 A number of Democratic lawmakers are pushing to include adult dependents and undocumented workers in the next aid package that is currently being debated by lawmakers. Some Republicans are pushing back. “House Democrats are already demanding that illegal immigrants receive benefits in the next #coronavirus aid package,” Ohio Rep. Jim Jordan tweeted last week. “Seriously? That can’t happen while so many American families are struggling.”

Agricultural and domestic workers, many of whom were minorities, were excluded from coverage under the Social Security Act of 1935. Whites had more job opportunities to choose from and received higher wages. The Federal Housing Authority established as part of the New Deal reinforced segregation by refusing to issue mortgages in African American neighborhoods. That practice known as redlining still continues to affect property values today.

READ MORE: The fight over the next coronavirus aid package, explained

More recently, a stimulus package implemented during the 2008 recession raised similar concerns to the 2020 relief package. Nina Olson, then a tax advocate with the IRS, testified before Congress in 2008 that non-filers face barriers affecting their ability to claim stimulus money. Treasury Department data indicates that about 3.4 million of the 15 million eligible Social Security and Veterans Affairs beneficiaries did not successfully file a return to claim stimulus money.

As lawmakers consider another aid package, tax and economic advocates urge lawmakers to consider how this legislation will shape society for years to come. “Any types of inequality that we’re writing into policy now are going to have a reverberation moving forward — both in terms of policy precedent and in terms of uneven distribution of resources,” said Amy Castro Baker, a professor with the University of Pennsylvania and a lead researcher with the universal basic income program in Stockton, California.

“I try to think about this in a multigenerational way,” said Price of the Insight Center. “We know these policies have long-term implications that we should take very seriously. This is going to have a real ripple effect.”

Left: A woman struggles to fill out tax forms. Photo via Getty.