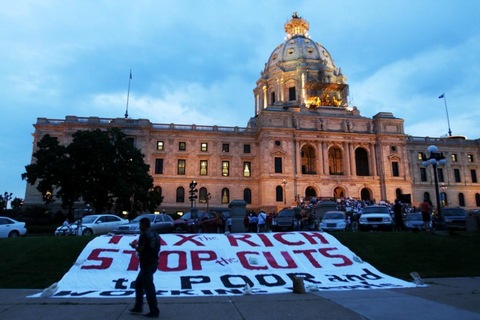 Updated 6:30 p.m. ET
Minnesota Gov. Mark Dayton and GOP lawmakers say they have reached a deal to end a budget showdown that has led to the state’s government shutdown. Dayton told reporters the shutdown was expected to end “within days,” according to news agencies.

Posted 3:06 p.m. ET
Minnesota GOP leaders have agreed to a special meeting on Thursday to discuss an end to the state’s government shutdown.

Minnesota Public Radio has been liveblogging the day’s ongoing events.

In a letter he wrote to the states two top Republicans, Minnesota Senate Majority Leader Amy Koch and Minnesota Speaker of the House Kurt Zelles, Dayton said, “I will reluctantly agree to, although I do not agree with, your signed offer sheet, dated June 30, 2011.”

Dayton read the letter aloud before a discussion of the government shutdown at the University of Minnesota’s Humphrey School of Public Affairs.

The deal is not final, however, as Dayton made a few conditions to the June 30th offer. He’s asked Republicans to drop all policy changes from earlier proposals, drop the “15%, across-the-board reduction to the number of employees in all agencies,” and asking that they pass a $500 million bonding bill that would put “people back to work throughout Minnesota”.

More Coverage of the Minnesota Government Shutdown from MPR:

Some Businesses May Benefit From Shutdown

Shutdown Cutting off the Flow of Alcohol