Most Americans support these 4 types of gun legislation, poll says

After multiple mass shootings in recent weeks, a majority of Americans think it is more important to control gun violence than to protect gun rights, according to a new PBS NewsHour, NPR and Marist poll.

Policies with the strongest support include more funding for mental health screening and treatment, mandatory background checks and licensing for gun purchases, and passage of a national “red-flag” law, which would give a judge authority to order the removal of guns from a person who poses a risk to themselves or others, the poll suggests. 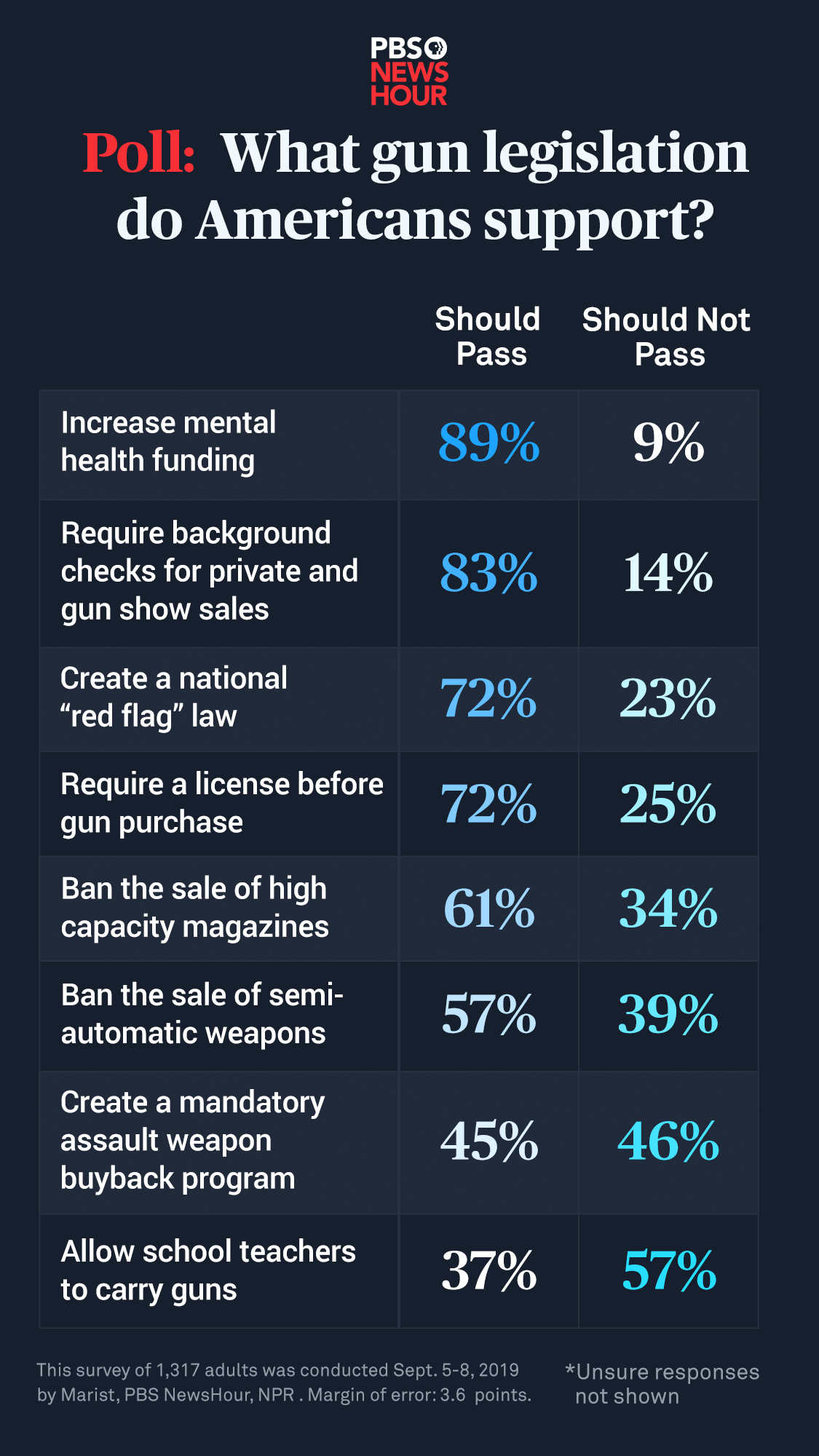 Several mass shootings have ramped up the debate over how the U.S. should respond to gun violence. In less than two months, there have been four mass shootings–in El Paso, Midland and Odessa, Texas; Gilroy, California; and Dayton, Ohio.

Members of the public have called for Congressional action, and several lawmakers called on their colleagues to address the violence when the House and Senate returned from August recess.

Congress is back in session this week, and several bills designed to reduce gun violence await votes from lawmakers. Senate Majority Leader Mitch McConnell has said support from President Donald Trump was key to any piece of legislation getting a vote.

When asked to choose, 55 percent of U.S. adults said the nation needs to prioritize controlling gun violence, compared to 39 percent of Americans who said they preferred protecting gun rights.

Nationwide, support for controlling guns has risen incrementally, but significantly, in the last six years.

In March 2013, months after 26 students and teachers were shot and killed at Sandy Hook Elementary School in Newtown, Connecticut, Americans were almost evenly split on how to balance gun violence with Second Amendment rights. Since then, mass shootings have erupted in schools, places of worship, concerts, shopping malls and night clubs.

Which policies do people support?

Broad bipartisan support for Congressional action on specific gun policies emerged in this poll, with 89 percent of Americans, saying Congress should pass more funding to screen and treat people with mental illness who are trying to purchase guns legally. Eighty-three percent of respondents said background checks should be required if someone wants to buy a gun at a gun show or through a private sale.

When asked if Congress should pass a national so-called “red flag” law, otherwise known as extreme risk protection orders, which allow police to seize a person’s gun after a judge decides that individual poses a threat to themselves or others, 72 percent of Americans supported the idea, compared to 23 percent who did not. Similarly, 72 percent of U.S. adults said a person should be required to obtain a license before buying a gun.

READ MORE: Congress has 110 gun bills on the table. Here’s where they stand.

Support became more politically fragmented when Americans were asked about banning the sale of high-capacity ammunition magazines or semi-automatic assault weapons such as the AK-47 or AR-15.

Sixty-one percent of out of 10 Americans said they want to ban high-capacity magazines, but 51 percent of Republicans rejected the idea.

Americans are split on whether to institute a mandatory buyback program of assault weapons, similar to policies that 2020 Democratic presidential candidates Beto O’Rourke and Senator Kamala Harris have suggested.

And 37 percent of U.S. adults said Congress should pass legislation that allows teachers to carry guns in schools. That support was strongest among Republicans, and people who supported Trump in the 2016 election.

Those opinions reflect the results of surveys out this week. A Monday poll from The Washington Post and ABC News showed that 89 percent of Americans said they supported background checks, while 86 percent supported so-called “red flag laws.”

In the journal Health Affairs, researchers shared findings from the National Survey on Gun Policy, a biennial questionnaire that surveys gun owners and non-gun owners and was first asked after the 2012 mass shooting at Sandy Hook Elementary School. In that nationally representative online survey, 88 percent of U.S. adults said they support universal background checks, while 76 percent said they backed “red flag laws.” And 77 percent of Americans said they wanted to require gun purchasers to be licensed.

Colleen Barry said she launched that survey a month after Sandy Hook to better understand public attitudes about guns and gun policy because “we knew almost nothing.”

“Public opinion alone doesn’t explain what gets enacted into law, but public opinion is critical to provide direction to where we can act.”

As a health policy professor at Johns Hopkins University and the study’s lead author, Barry was nervous that people “might voice an opinion that is fleeting” about gun violence after a tragedy like the school shooting in Newtown, making the survey results unreliable. The responses, however, have shifted little since then, Barry said. If public opinion alone passed laws, “universal background checks would have been enacted in 2013,” Barry said, due to the stable, longstanding and high levels of public support for that policy.

“Public opinion alone doesn’t explain what gets enacted into law, but public opinion is critical to provide direction to where we can act,” she said.

While the public needs more gun violence data, Barry said, “there’s enough research out there to know what policies could make a difference” in potentially reducing gun deaths and preventing mass shootings.

When the nation was confronted with deaths from motor vehicle accidents, HIV/AIDS and opioid misuse or overdoses, the U.S. funded research to better understand and stem those public health crises, said Garen Wintemute, chair of the Violence Prevention Research Program at the University of California, Davis. For nearly 40 years, Wintemute has analyzed trends in gun violence to inform and develop policies that might prevent it (his team recently looked at how extreme risk protection orders, or “red-flag” laws helped prevent 21 mass shooting cases in California), but he said it is no accident that blindspots remain in federal data about guns.

“We just have chosen not to do it when it comes to firearm violence, which is a tragedy,” he said.

READ MORE: What we don’t know about gun violence

In 1996, Congress passed the Dickey Amendment–a law that discouraged the Centers for Disease Control and Prevention from spending any federal dollars on research that could be used to advocate against guns. That amendment had a chilling effect on research that has lasted for decades.

In 2018, Congress clarified this amendment, and this year, the House passed legislation to fund research into gun violence. The bill did not pass the Senate.

Carl Pfullmann, a 33-year-old Republican and father of two in San Antonio, Texas, said he doesn’t think government regulations will change anything when it comes to gun violence. An avid deer hunter, Pfullmann said he takes gun safety very seriously, storing his guns in one locked safe and the ammunition in another locked safe kept on the other side of his house, saying that “the two never meet unless we go hunting or target practice.”

He believes mental health screening and background checks would help prevent mass shootings like those that unfolded in Texas last month. He also said he doesn’t “trust somebody other than law enforcement to carry a weapon in public. There’s no reason to do it.”

Before Congress meets, retail stores go at it alone

Some companies are not waiting for Congress to vote before taking action. On Sept. 3, discount retail giant Walmart stopped selling ammunition for handguns. That news came a month after a gunman entered a Walmart store in El Paso, Texas, killing 22 people and injuring 24 more before law enforcement subdued him.

READ MORE: What these numbers tell us about the gun debate in 2019

In a memo to employees, Walmart CEO Doug McMillon also asked that customers stop openly carrying firearms, even if they are shopping in states that permit open-carry, the Associated Press reported.

PBS NewsHour, NPR and Marist conducted a survey Sept. 5-8 that polled 1,317 U.S. adults with a margin of error of 3.6 percentage points.

Left: Multiple mass shootings have ramped up the debate over how the U.S. should respond to gun violence, and that's reflected in the latest poll from the PBS NewsHour, NPR and Marist.