What we know about the El Paso and Dayton shooters’ guns

In two mass shootings over the weekend, gunmen used what police described as semi-automatic, assault-style weapons — carrying enough ammunition to kill dozens in a matter of minutes. Both the guns and the high-volume magazines are controversial. The PBS NewsHour looked at what guns were used in the attacks, and how they might be regulated.

In El Paso, police confirmed that the shooter used an AK-47 style rifle. The 21-year-old suspect wore ear protection but did not appear to wear any body armor or heat-resistant gloves. After police intervened, 22 people died and 24 more were injured.

In Dayton, the shooter carried what authorities initially described as a .223-caliber high-capacity rifle, but is technically classified as a pistol. He also had 100-round drum magazines, according to the Dayton Police Department, allowing him to shoot up to 100 rounds before pausing to reload. With the high capacity, he killed nine people and injured 27 more in just 30 seconds before he was shot and killed by police. Fully loaded, his magazines would have carried 250 rounds of ammunition.

Police released pictures of the weapon used in the attack, which showed the lower receiver, the base part around which the rest of the gun is constructed, was made by Anderson Manufacturing in Kentucky. It is unclear from the photos who made the stock and barrel. The weapon’s barrel is short, which makes it easier to conceal and use in close quarters.

The shooter also had a tactical sight attached to his weapon — a Sightmark Ultra Shot Z-Series Reflex Sight — which is used for situations in which a shooter needs to sight something quickly.

These guns, magazines and gear were legal in Texas and Ohio. But that wasn’t always the case.

Originally passed by Congress in 1994, the Federal Assault Weapons Ban prohibited the production, sale, transfer, import or possession of semi-automatic assault rifles and high-capacity magazines. Under the ban, magazines were limited to a capacity of 10 rounds.

The ban was set to expire in 10 years unless renewed by lawmakers. By 2004, control of Congress had switched to the Republicans, who allowed the ban to lapse that year.

Since then, states have enacted their own restrictions. The type of guns used in El Paso and Dayton are banned in California, Connecticut, Hawaii, Maryland, Massachusetts, New Jersey, New York and Vermont, according to the Giffords Center to Prevent Gun Violence. Minnesota and Virginia require potential buyers to pass a background check. The high-capacity magazines are prohibited in those same states, plus Colorado. 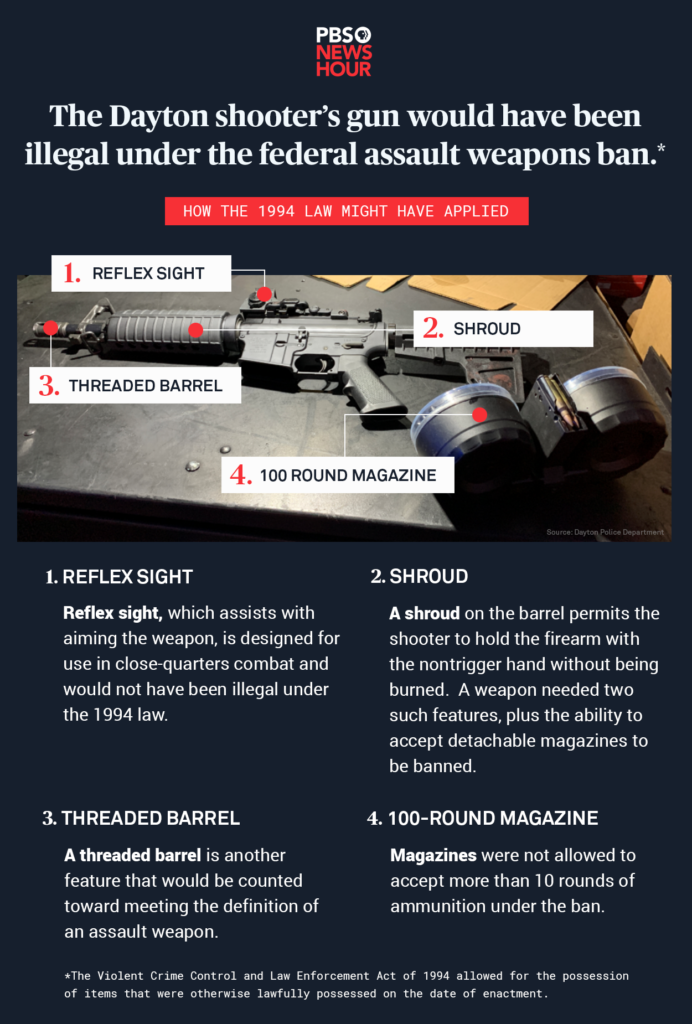 In his remarks to the country, President Trump did not address specific gun control measures. Most Democratic presidential candidates have called for renewing the bans on semi-automatic weapons and high capacity magazines.

The results showed deep partisan divides with 89 percent of Democrats backing a ban, joined only by 29 percent of Republicans.

The National Rifle Association did not respond to the PBS NewsHour’s request for comment.

Vanessa Dennis and Travis Daub contributed to this report.

Left: These guns, magazines and gear were legal in Texas and Ohio. But that wasn’t always the case.