Most voters expect intimidation at the polls. But they’re voting in record numbers

While many states are expecting record-breaking turnout in the 2020 presidential election, more than two-thirds of registered voters think there will be some form of intimidation or other efforts at the polls to prevent legitimate voters from having their voices heard.

A majority of Republicans, Democrats, Independents, men and women from across the country, of all ages and races, are expecting some or many attempts to block people from voting, according to the latest PBS NewsHour/NPR/Marist poll, conducted less than a month before Election Day. In November 2016, 57 percent of registered voters anticipated attempts to thwart voting; that number has grown to 67 percent. 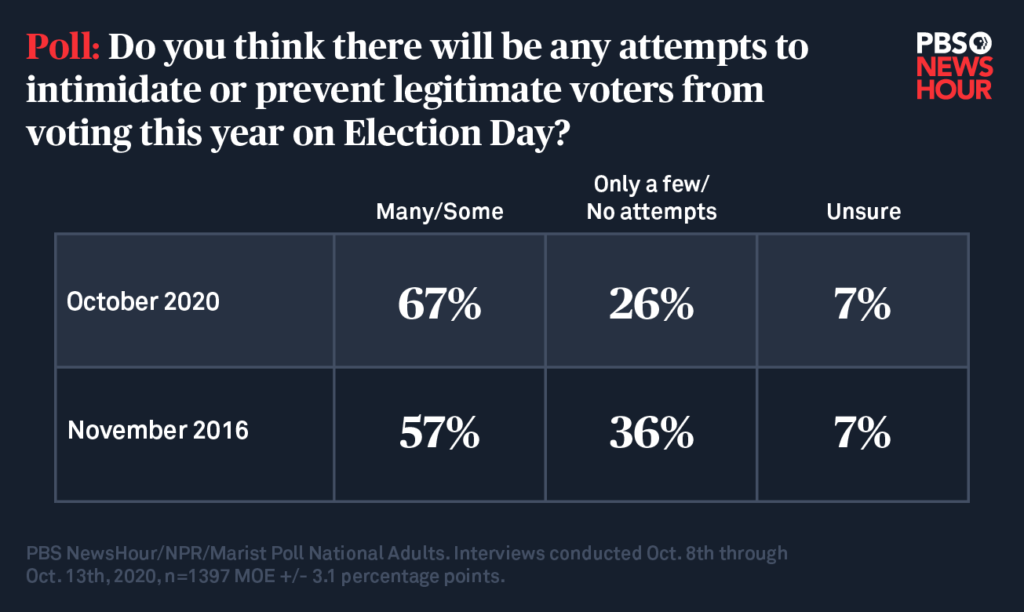 In recent months, President Donald Trump’s campaign has reportedly recruited tens of thousands of volunteer poll watchers, many who have already been deployed to early voting sites in battleground states. On Saturday, former Vice President Joe Biden told voters during a campaign stop that the only way he would lose the election “is by the chicanery going on relative to polling places,” referring to Trump’s rhetoric and poll-watching encouragement.

Trump has repeatedly refused to say whether he will accept the results of the upcoming election. Coupled with his refusal to disavow white supremacists and militia groups, that is fueling concerns about violence at the polls or in the wake of the election, and over whether there will be a peaceful transfer of power in the event Trump loses on Nov. 3.

“Trump has demonstrated a willingness to invoke or deploy violence against American citizens,” said Carol Anderson, a professor in African American Studies at Emory University and an expert on voter suppression. She pointed to the instance in April when in response to Gov. Gretchen Whitmer’s strict shutdown amid the pandemic, Trump tweeted “LIBERATE MICHIGAN!” The FBI recently revealed that they had foiled a plan by a domestic paramilitary group to kidnap Whitmer and overthrow the Michigan state government, as well as a similar plot in Virginia. 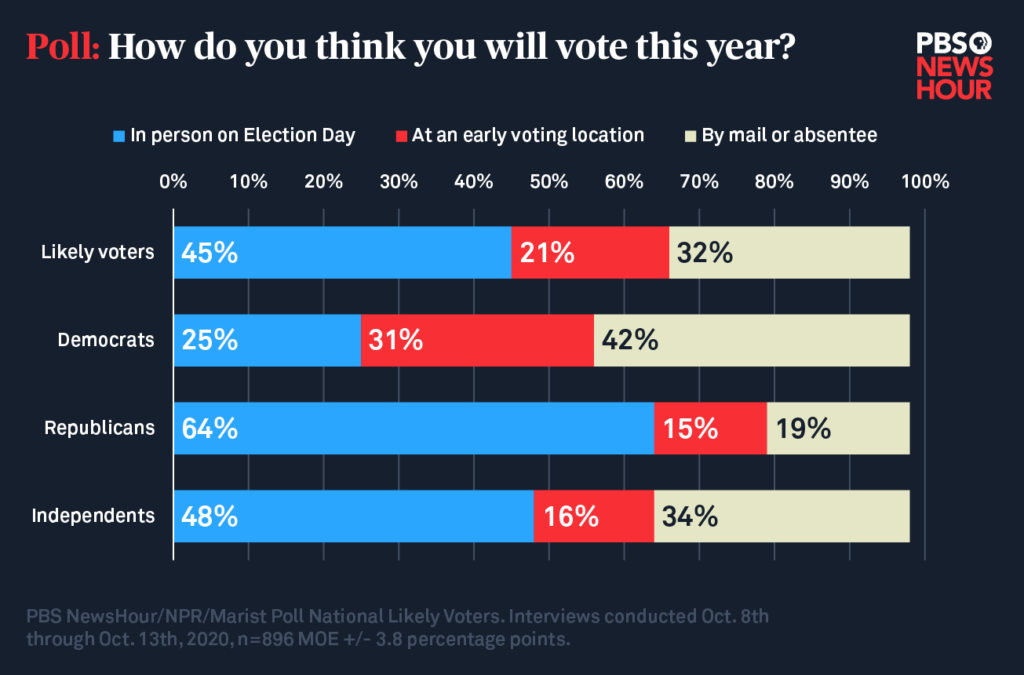 Anderson also cited the extreme measures used to clear peaceful protesters from Washington’s Lafayette Park, and Trump’s instructions to the far-right Proud Boys during the debate to “stand back and stand by” as evidence he is making an “illegitimate call to arms.”

The FBI and local law enforcement officials are reportedly preparing for election-related unrest and voter intimidation due to high tensions around the country, according to the Associated Press.

“The main danger on Election Day may be mutual fear and paranoia on both the left and the right. That could cause some to come out to the polls to ‘watch’ them or ‘guard’ them against perceived enemies,” the Anti-Defamation League’s Center on Extremism said in a statement to the NewsHour. “In some areas, even the presence of law enforcement near a polling station might be misinterpreted in some way.”

But, the ADL said, “there is no organized campaign at this time to keep people from voting.”

Still, the pandemic, concerns about safely voting and about making sure votes are counted have all driven greater public interest in alternative voting methods. Despite Trump’s attacks and attempts to discredit mail-in voting, 32 percent of likely voters said they will vote by mail or absentee ballot in this election. That method was most popular among Democrats, with 42 percent saying they plan to vote by mail, along with 34 percent of independents and 19 percent of Republicans.

Out of likely voters, the largest number — 45 percent — said they plan to vote in person on Election Day, including nearly 64 percent of Republicans, 48 percent of independents and 25 percent of Democrats.

In the past month, the biggest change has been among likely voters who say they will cast their ballot in person at an early voting location ahead of Election Day. That number has risen seven points to 21 percent, including 31 percent of Democrats.

So far, nearly 15 million Americans in 40 states have already voted in the 2020 election, either by mail or in person at early polling stations, according to an Associated Press analysis of general election voting data. That amounts to a quarter of all early votes cast in the 2016 election.

“It turns out that the public’s desire to vote and be heard is so strong it is overwhelming the pandemic.”

Feelings about Trump are driving this surge in voter participation, said Michael Waldman, president of the Brennan Center for Justice at New York University School of Law. In the 2014 midterm election, voter turnout was its lowest in 72 years, he said, but four years later, voter turnout was the highest in over a century. While the pandemic upended so much in life, Waldman said COVID-19 so far has not been enough to discourage Americans from voting.

“There was every reason to expect 2020 to be record-breaking,” Waldman said. “It turns out that the public’s desire to vote and be heard is so strong it is overwhelming the pandemic.”

Despite fears about delays in mail delivery and possible political interference, American confidence in the U.S. Postal Service has also grown since September, with 58 percent of likely voters saying they think election-related mail will be handled in a timely manner — an increase of seven percentage points.

Amid a week of hearings for Trump’s Supreme Court nominee Amy Coney Barrett, 44 percent of Americans said they support her nomination, while another 38 percent oppose her, and 17 percent said they were unsure.

Members of the Senate Judiciary Committee this week have asked how Barrett, a judge nominated by Trump to the federal appeals court in 2017, would weigh in on cases that are expected to appear before the Supreme Court in the coming months, including a lawsuit brought by the Trump administration and Republican attorneys general challenging the Affordable Care Act, and a possible 2020 election dispute, as well as past landmark Supreme Courrt decisions on abortion and same-sex marriage. But Barrett’s testimony offered few clues about how she might rule in the cases that could soon come before her if she is confirmed, nor how she views precedents that might later be challenged. 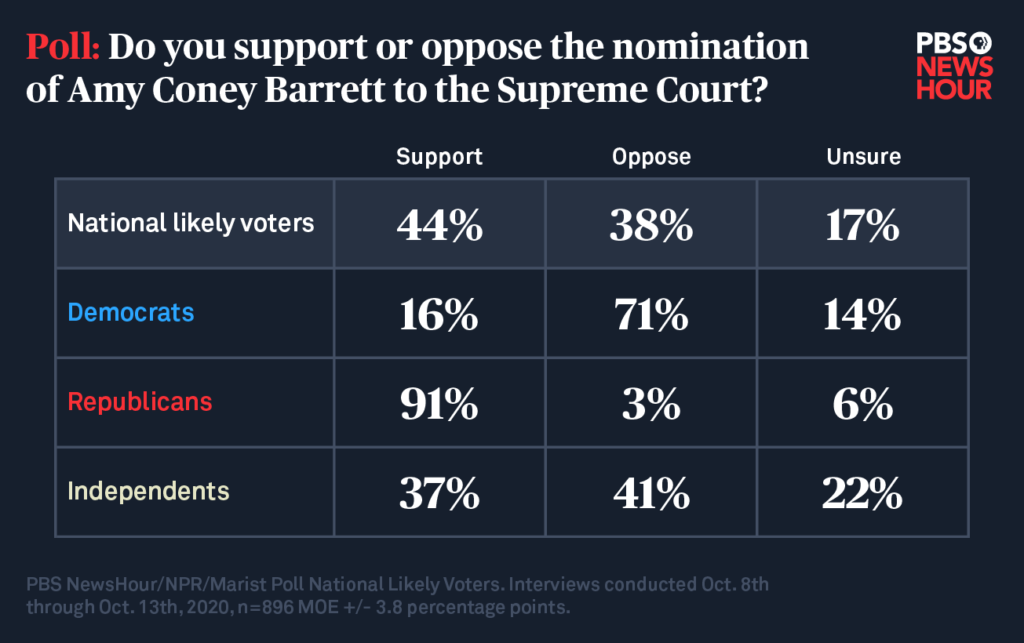 Trump nominated Barrett to the Supreme Court a week after Justice Ruth Bader Ginsburg died, and Republicans worked quickly to get her confirmed before the election — a move that could ensure a conservative majority on the court for decades. Democrats have called the move hypocritical because in 2016, Sen. Majority Leader Mitch McConnell, R-Ky., refused to hold hearings on then-President Barack Obama’s Supreme Court nominee, Judge Merrick Garland. It was an election year, and McConnell said the winner of the presidential election should choose the next justice.

The climate surrounding the confirmation of the next Supreme Court justice is “more political now than at any time in my life,” said Lucas A. Powe, law professor at the University of Texas.

Despite the current atmosphere, slightly more people support Barrett’s nomination than did Trump’s last Supreme Court pick, Justice Brett Kavanaugh, for whom an accusation of sexual assault played out during his Senate confirmation hearing. In October 2018, 41 percent of Americans said they supported Kavanaugh’s confirmation.

That final stretch has so far included one presidential debate and one vice presidential debate. When likely voters were asked whose ticket benefited the most from the matchups, 53 percent of likely voters named the Biden-Harris campaign. Another 35 percent said the Trump-Pence ticket benefited, while an additional 13 percent said they weren’t sure. 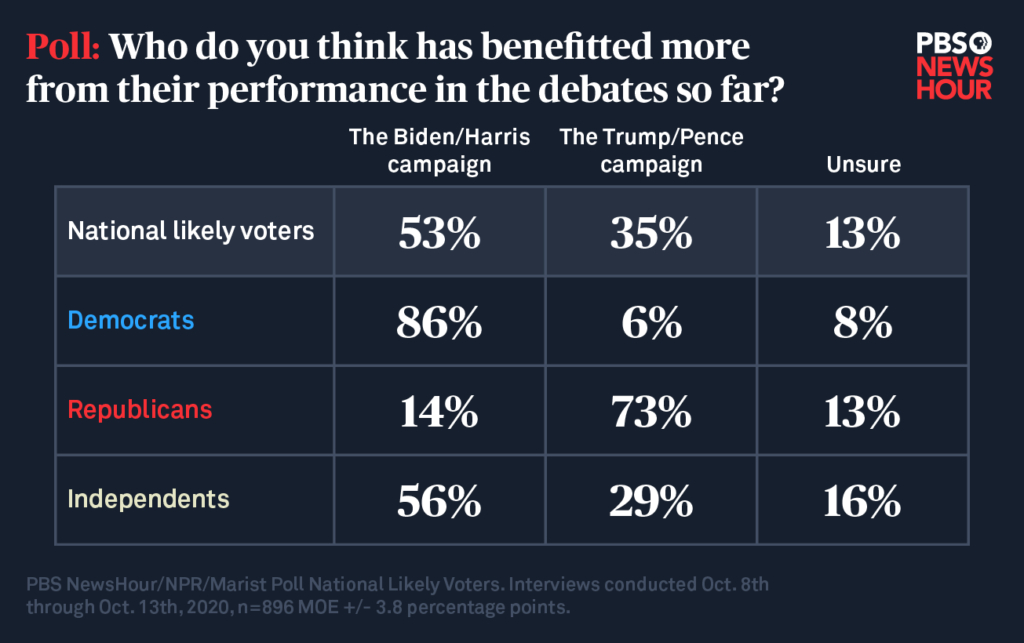 The first presidential debate was two weeks ago. During that in-person performance, Trump interrupted the former vice president 71 times, compared to Biden’s 22 interruptions. Reflecting on the roundly criticized performance, moderator and Fox News host Chris Wallace later told The New York Times, “I never dreamt that it would go off the tracks the way it did.” 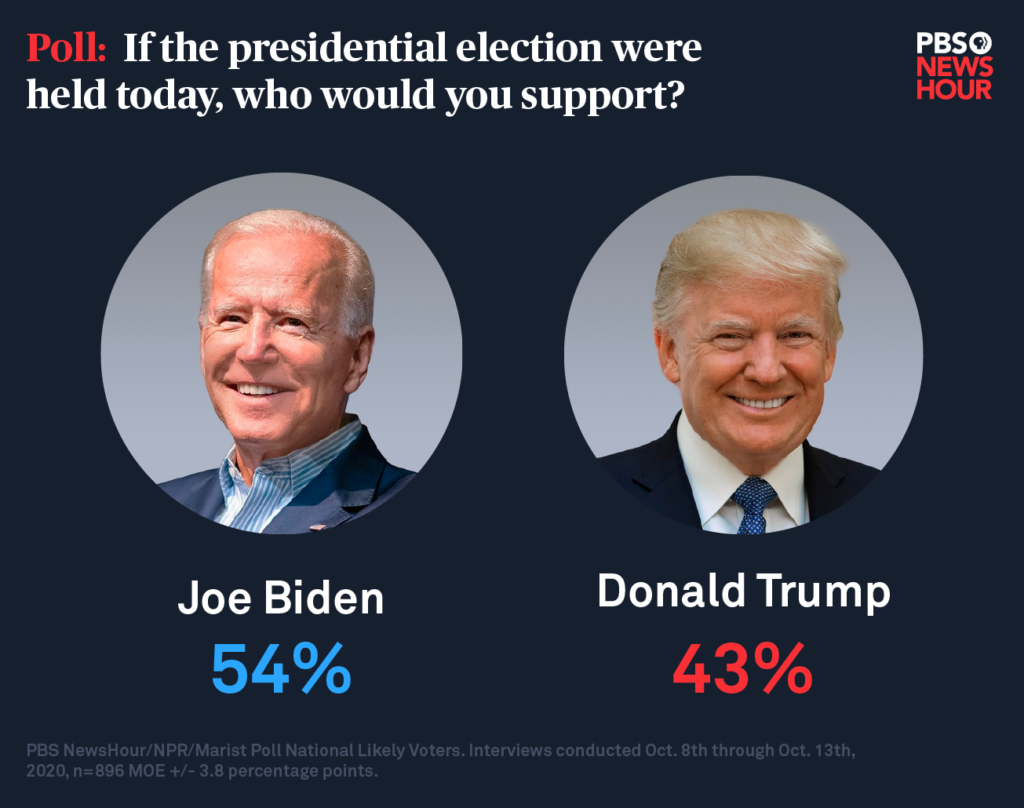 Days after appearing on stage with Biden, Trump announced on Twitter that he had been diagnosed with COVID-19, scuttling plans for the next debate, which was to take place Oct. 15. The Commission on Presidential Debates initially changed the debate’s format from in-person to virtual, but the Trump campaign protested the change and announced it was backing out. The Biden campaign announced that the Democratic nominee would hold a televised town hall instead, after which Trump announced he, too, would hold one on a different network at the same time.

Trump’s COVID-19 diagnosis might have paused his campaign efforts for a few days, but it doesn’t seem to have changed people’s impression of his ability to manage the nation amid the pandemic. A majority of likely voters — 55 percent — still say Biden could better handle the nation’s COVID-19 response than the president, but faith in Trump’s ability to handle the pandemic actually ticked up a point, though still within the margin of error, from September.

After Trump tested positive for COVID-19, he developed a fever, required oxygen and was treated with multiple experimental medications and therapies at Walter Reed Military Medical Center — signs that experts say suggest he had a severe case. But public statements released by the president’s physician raised questions about overall transparency in regard to Trump’s condition. A majority of Americans — 58 percent — said they place little to no trust in the information they hear from the White House about the president’s health, including 92 percent of Democrats and 68 percent of independents. Another 41 percent said they do trust updates coming from the White House about Trump’s well-being, shored up by 86 percent of Republicans.

After his discharge, Trump tweeted to Americans, “Don’t be afraid of Covid. Don’t let it dominate your life.” That message was roundly criticized by the public health community as irresponsible, as well as by the family members of victims of the virus. Compared to millions of Americans, many of whom have lost their health coverage as a result of the pandemic, the president received some of the best medical care in the world, tapping a well of resources largely unattainable to the general population. So far, more than 215,000 Americans have died from COVID-19, and a study published in JAMA this week suggests that number could be far higher.

When Americans cast their vote, they should remember to avoid crowds, stay at least 6 feet apart, wear a mask and use hand sanitizer before and after using polling equipment, said Dr. Abraar Karan, a doctor of internal medicine at the Brigham and Women’s Hospital and Harvard Medical School, as those places “become high touchpoint areas.”

The public is weary of indefinite efforts to avoid spreading the virus, Karan said. But as Election Day nears, cases are soaring in parts of the country and new outbreaks are being reported in areas that had previously been fairly contained. “This is not the time to get tired. This is the time to double down on these efforts,” Karan said,

READ MORE: How risky is voting in person? Here’s how to navigate your options during the pandemic

Left: Voters wait in line on the first day of early voting for the general election in Atlanta, Georgia. Photo by Jessica McGowan/Getty Images