Why ‘negative partisanship’ is flipping politics on its head

There were the “Lock her up!” chants that rang through Donald Trump’s campaign rallies, encouraged by the President-elect himself. There was Hillary Clinton’s famous “basket of deplorables” comment and her warning to a reporter: “I’m the last thing standing between you and the apocalypse.” The mudslinging from both sides reached new lows in an election pitting the two most unpopular presidential candidates in modern history.

But the negativity on display in the 2016 election – from the candidates, their surrogates and the public alike – also exposed a trend in American politics that predates Clinton and Trump’s brutal showdown.

Increasingly, Democratic and Republican voters are motivated by negative feelings toward the other party and its candidates, according to political scientists Alan Abramowitz and Steven Webster, authors of the 2015 study, “The rise of negative partisanship and the nationalization of U.S. elections in the 21st century.”

In interviews, Abramowitz and other political scientists and experts said the kind of voter antagonism directed toward Clinton and Trump could become the norm, not the exception, in future elections.

Negative partisanship is “very real. We have pretty good evidence for that,” said Barry Burden, the director of the Elections Research Center at the University of Wisconsin-Madison. “And it’s gotten more severe over time.”

Negative views on the rise since 1980

The rise of negative partisanship is backed up by troves of data from the past three-plus decades. Abramowitz and Webster’s analysis of data from the American National Election Studies (ANES), the largest national voter survey, found a sharp increase in voters’ party loyalty in federal elections since 1980, as well as a boost in straight-ticket voting.

From 1980 to 2012, the ANES data also shows that voters’ ratings of their own parties dipped from 72 degrees to 70 degrees (respondents rate their feelings toward a party on a feeling thermometer; 100 is extremely positive, 0 is extremely negative, and 50 is neutral).

But over that same 32-year span – which stretches from the presidency of Ronald Reagan to that of President Obama – voters’ attitudes about the opposing party deteriorated. In 1980, voters’ average rating of the opposing party was 45 degrees. By 2012, the average had fallen to 30 degrees.

The ANES data is supported by other studies documenting the rise of negative partisanship.

“The animosity is mutual. And it’s growing.”

Democratic voters have followed a similar pattern, according to Pew. In 1994, 17 percent held a “very unfavorable” view of the Republican Party. That percentage climbed to 37 percent in 2008, and 55 percent in 2016.

So, the animosity is mutual. And it’s growing.

Both campaigns seized on these views in the presidential race, Abramowitz said in an interview.

“Demonizing Hillary Clinton was a key to the success of the Republican strategy,” Abramowitz said, and among Democrats, “there was very strong dislike for Donald Trump.” 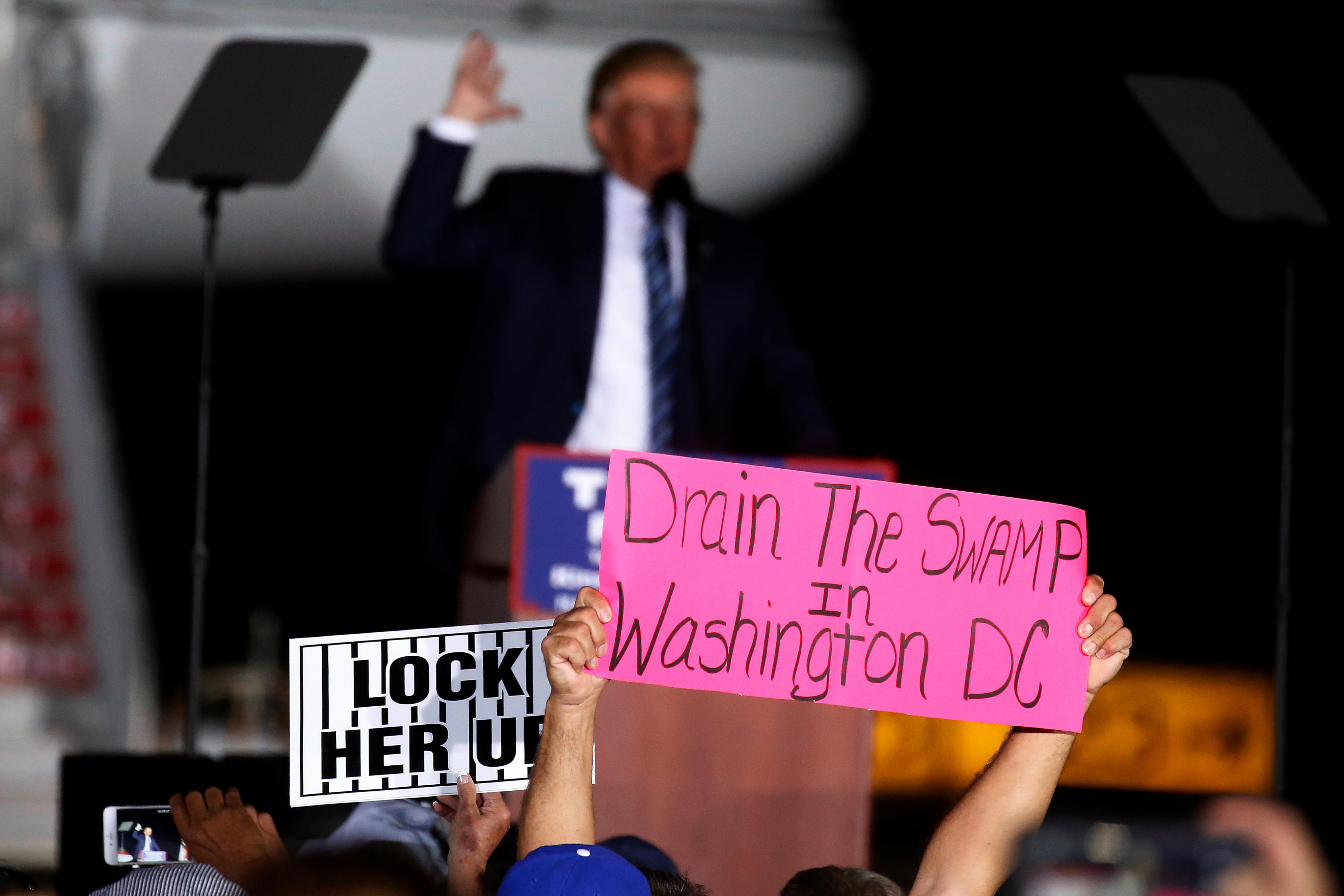 “Lock her up” signs and chants were a regular feature at Donald Trump’s campaign events throughout the election. Photo by Carlo Allegri/Reuters

Though much of the political science community believes negative partisanship is on the rise, not everyone saw it as the driving force behind the 2016 election. Lara Brown, a professor of political science at George Washington University, said Donald Trump played to pent-up voter frustration with establishment leaders across the political spectrum.

“To a certain extent, people were voting for Donald Trump, because he was against both parties,” Brown said. “I see Donald Trump much more as a reaction to the fact that, basically since 2005, [many voters believe that] both parties have betrayed the American public. They promised a lot, and they haven’t really delivered.”

Abramowitz acknowledged Trump’s unique appeal as an outsider candidate. But he noted that most incumbents, including many vulnerable Republican senators, won reelection in 2016, further proof of the recent spike in party loyalty and straight-ticket voting.

“What was kind of remarkable in this election was that while Trump was having all this success attacking the establishment and running as this very unconventional candidate,” voters still opted for establishment candidates in congressional races, Abramowitz said.

Only two incumbents lost reelection in the Senate in a year with 34 seats up for grabs. In the House, 380 out of the 393 incumbents who ran for reelection won a new term.

The rise in negative partisanship since the Reagan era has several root causes. But Abramowitz said the trend mainly stems from changes in both parties’ voter bases, as well as divisions over race, religion and the role of government.

“There’s a growing racial divide between the parties, both in terms of race and racial attitudes,” Abramowitz said. “Social attitudes and cultural values [played a role, along with] a great big division over how one views the government and the role of government.”

Of course, these divisions aren’t new. Partisanship and political polarization have been part of U.S. politics since the dawn of the republic.

Supporters of the Federalist and the Democratic-Republican parties, along with their standard bearers – Alexander Hamilton and Thomas Jefferson – had a contentious relationship in the late 18th and early 19th centuries.

“Partisanship and political polarization have been part of U.S. politics since the dawn of the republic.”

More recently, political polarization spiked during the 1960s, when white Southern Democratic voters and politicians left the party in droves for the GOP in response to the civil rights movement.

“That wiped out a lot of moderate Southern Democrats, [and] it replaced them with very conservative Republicans,” said Allan Lichtman, a historian at American University who has famously predicted every presidential election for the past 30 years. The resulting shakeup pushed the “Democratic Party to the left and the Republican Party to the right.”

One of the main differences between then and now, is the proliferation of partisan media outlets that reinforce voters’ opinions. The abundance of right and left-leaning news (and fake news), coupled with the growing influence of money in politics, has transformed elections at every level into partisan slugfests.

“Voters no longer view House, Senate and local elections as separate arenas of competition from presidential elections. On the contrary, voters now view their choices in elections at all levels through the lens of negative partisanship,” Abramowitz and Webster wrote in their 2015 study.

They added: “At all levels of government, the greatest concern of party supporters is preventing the opposing party from gaining power. For this reason, negative partisanship has nationalized American elections.”

These changes help explain why, in the end, so many anti-Trump Republicans supported a highly unusual and controversial candidate who held stances on issues like infrastructure and trade that are not aligned with modern Republican orthodoxy. On the other side, many liberal Bernie Sanders supporters who backed Clinton in the general election were more motivated by a desire to stop Trump than by enthusiasm for the party’s nominee.

Many political observers said the nation’s political polarization will only worsen with time.

“It is difficult to identify ways that negative partisanship might be dampened,” said Burden, the head of the University of Wisconsin-Madison’s elections center. “As long as people continue to consume partisan media sources and associate with people with similar attitudes, there are not many opportunities to see good aspects in the other side.”

But some were more optimistic.

“I’m not convinced that [negative partisanship] is as enduring as what some might argue,” said Jan Leighley, a political science professor at American University. “I think there are probably policies, candidates, periods, in which the right elite ‘move,’ if you will, can bridge that polarization.”

Left: A Trump supporter argued with a demonstrator at a Donald Trump rally in Chicago in March. Photo by Kamil Krzaczynski/ Reuters