President Joe Biden has assumed leadership of the United States at one of its most unstable moments in modern history. A new PBS NewsHour/NPR/Marist poll reveals how Americans feel about the 46th president’s performance so far, and how it compares to former President Donald Trump.

About half of Americans — 49 percent — said they approve of how Biden has served as president so far, less than two months into his presidency, according to the latest poll. But as was the case with his predecessor, whose last year in office was marred by the pandemic, much of that support comes from people who identify as members of his own party. Among Democrats, Biden’s approval rating was 87 percent. But only 11 percent of Republicans and43 percent of independents said they approved of the president. 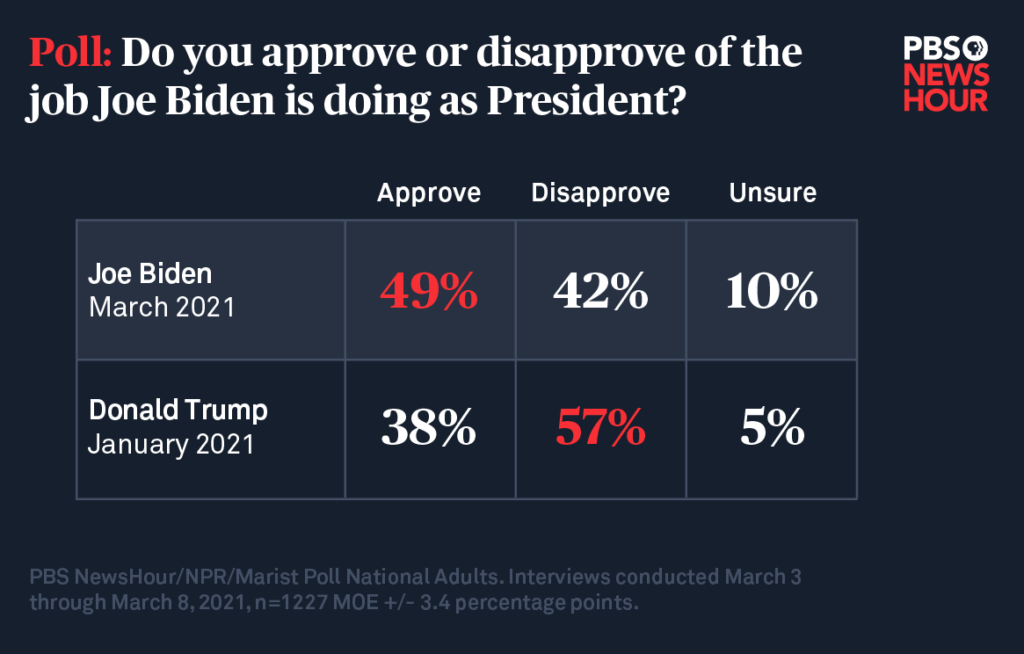 Another 42 percent of Americans disapprove of what Biden has done so far as president, including 81 percent of Republicans and 43 percent of independents.

Still, Biden currently has a higher job approval rating than former President Donald Trump ever reached during his four years in the White House, according to Marist polling data. And support for Biden seems to be growing. In this latest poll, 52 percent of Americans said they had a favorable impression of him. That’s up from 41 percent in October 2019 in the midst of Trump’s first impeachment. Since then, Biden has inched up in favorability.

Republicans in Congress face steeper job disapproval, with 64 percent of Americans saying they do not like what they are seeing, an increase of 6 percentage points over January 2019, including 38 percent of Republicans and 85 percent of Democrats.

How do Americans view Biden’s handling of the pandemic and the economy?

Most Americans think Biden is handling the coronavirus pandemic far better than Trump. Sixty-two percent approve of how Biden has managed the U.S. response so far. Another 30 percent say they disapprove. 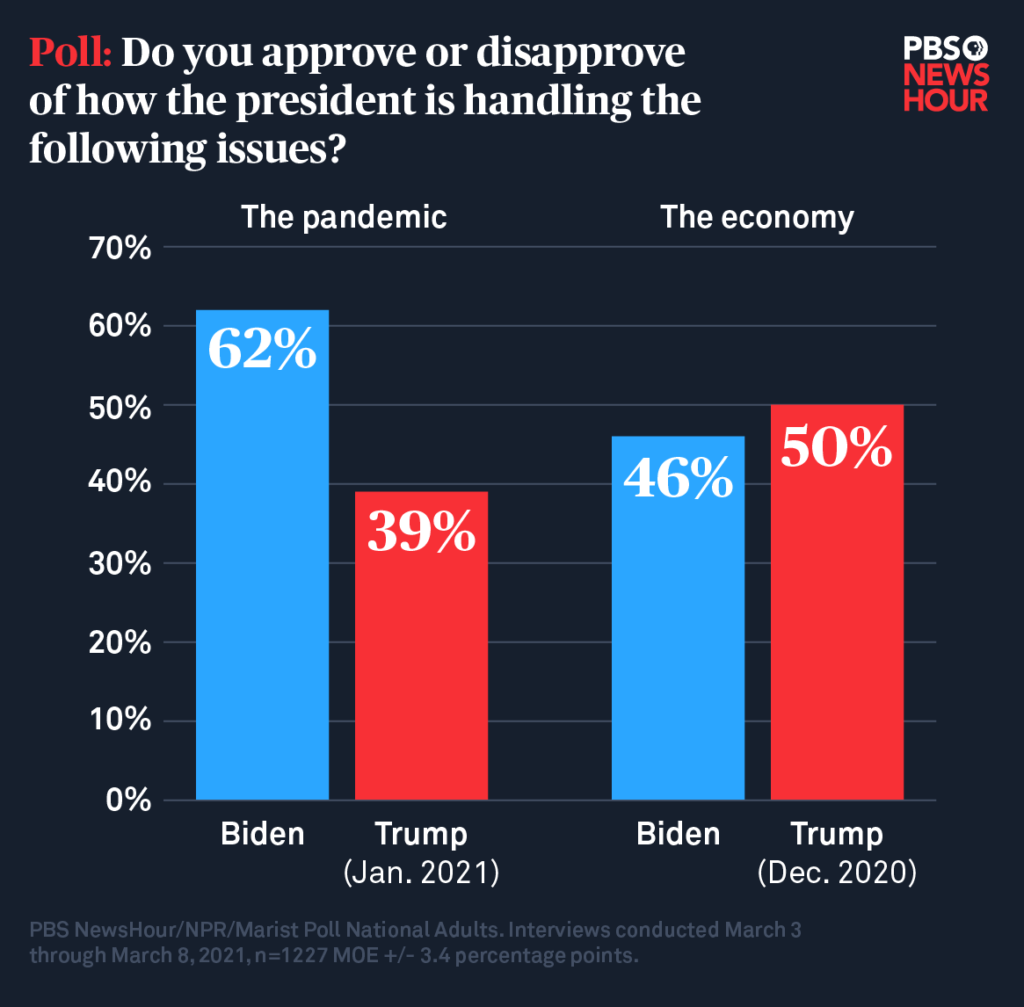 The public’s approval of Biden’s actions far exceeds that earned by Trump’s leadership during the pandemic. His highest approval rating was 18 points lower, at 44 percent in March 2020, the same month the World Health Organization declared COVID-19 to be a pandemic and Trump labeled it a public health emergency. From there, his approval on handling the pandemic dropped as low as 37 percent, recovering slightly to 39 percent by the time he left office in January.

But Americans have less faith in Biden’s ability to heal the nation’s wounded economy compared to Trump. While 46 percent of U.S. adults approve of how Biden has managed the economy, another 41 percent do not approve. During Trump’s last days in office, half of Americans said they approved of the former president’s handling of the economy, a sentiment thatTrump leveraged throughout his presidency and in his 2020 campaign for a second term.

The nation needs to uproot systemic problems to address what is really wrong, Adams said.

But neither Biden nor Trump seem to understand the problems that regular Americans face, said Zach Castillo of Mishawaka, Indiana, an independent voter who cast his ballot for Trump in 2020.

“Their lives seem so lofty and removed from what is really going on and how people are really living and feeling in the middle of the country,” Castillo said.

Left: President Joe Biden speaks from the State Dining Room following the passage of the American Rescue Plan in the U.S. Senate at the White House on March 6, 2021 in Washington, DC. The Senate passed the latest COVID-19 relief bill by 50 to 49 on a party-line vote, after an all-night session. Photo by Samuel Corum/Getty Images