Trump will be remembered as one of the worst U.S. presidents, nearly half of Americans say

As President Donald Trump prepares to leave the White House, 47 percent of Americans say he will be remembered as one of the worst presidents in American history, according to the latest PBS NewsHour/NPR/Marist poll.

By comparison, Marist data from December 2016 shows 17 percent of Americans said President Barack Obama had been among the worst chief executives. Four years later, 83 percent of Democrats, 43 percent of independents and 13 percent of Republicans felt Trump had earned that title. And more than half of Americans — 57 percent — disapprove of the job he has done in office.

Sixteen percent of Americans overall, including a third of Republicans, think Trump has been one of the country’s best presidents, and roughly a third of Americans — 38 percent — approve of his performance over his tenure.

At Trump’s inauguration in January 2017, he described a United States that he said was besieged with “crime and gangs and drugs” and littered with “rusted-out factories,” while vowing to put an end to “American carnage” and put the nation “first.” Now, as the country prepares to usher in President-elect Joe Biden’s presidency, the Capitol is being guarded by more than 20,000 National Guard troops after a deadly attack by Trump’s supporters, the U.S. has lost roughly 400,000 lives to the coronavirus, due in part to a haphazard pandemic response, and the country’s economy has been battered in the fallout. Presidential historian Jeffrey Engel said history will “remember Trump as a person who focused primarily on himself and left carnage in his wake.”

Before hitting this final lowpoint, the president’s approval/disapproval numbers have been remarkably steadfast over the last four years, according to Marist polling data. Shortly after Trump’s inauguration, 39 percent of Americans said they approved of the new president’s job so far in office, while another 11 percent said they weren’t sure. Half of the country disapproved of Trump. Today, that disapproval has only grown, and the number of Americans who are unsure has dwindled to 5 percent.

The data reflect how Trump has carved sharp divisions between Americans. In December 2016, 53 percent of Americans said that Trump would do more to divide the country than to unite it. In the latest poll, respondents were far more optimistic about Biden’s outreach, with 55 percent saying the former vice president and senator would do more for unity. 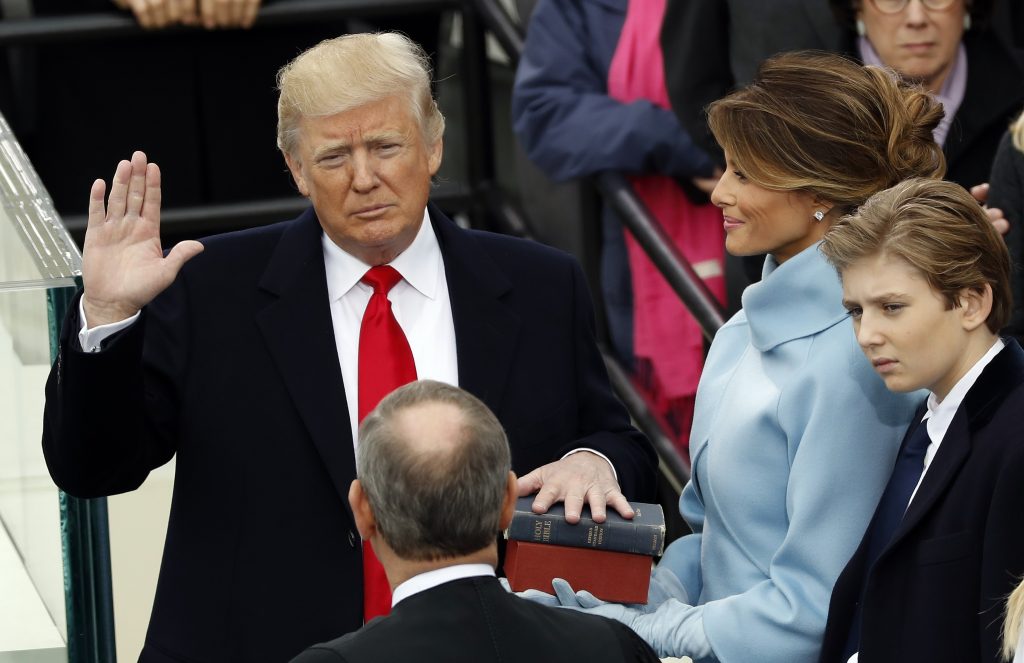 US President Donald Trump takes the oath of office with his wife Melania and son Barron at his side, during his inauguration at the U.S. Capitol in Washington, U.S., January 20, 2017. Photo by Kevin Lamarque/Reuters

“[Trump] has turned off more Americans during the course of his presidency than” he has attracted, said Lara Brown, a political scientist and author who directs the Graduate School of Public Management at The George Washington University. 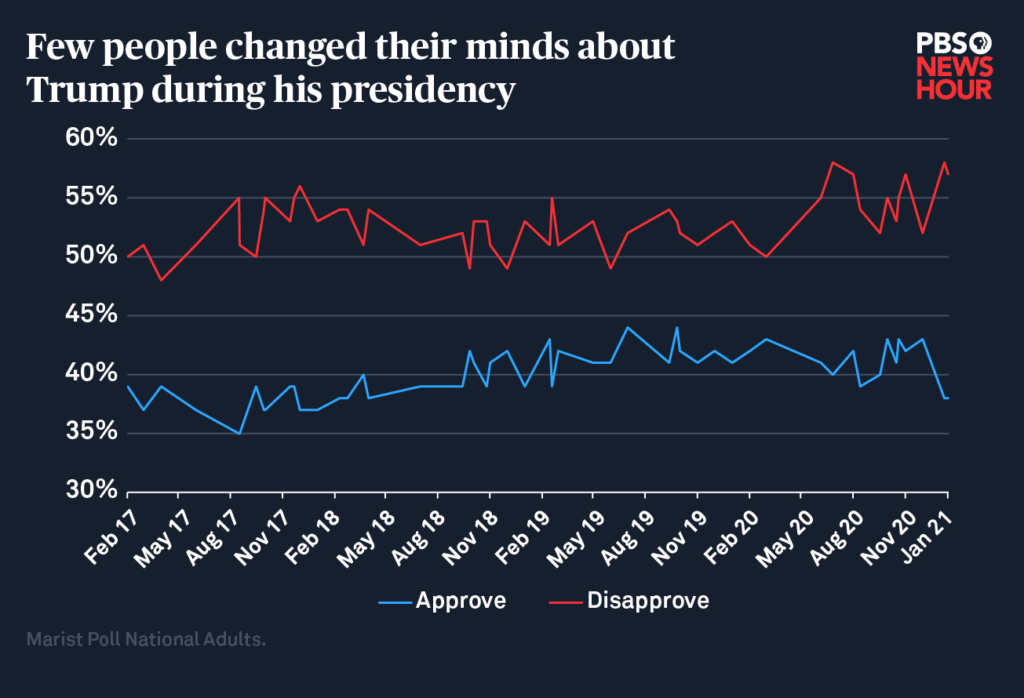 On balance, Americans have often graded Trump well on his handling of the economy, most recently with 51 percent of Americans saying they approve of his efforts, while 45 percent disapprove. Ahead of the coronavirus pandemic, Trump took credit for a surging stock market and unemployment at historic lows.

But COVID-19 and the Trump administration’s fragmented response — including insufficient testing, a botched vaccine distribution and fraying health care system — contributed to more deaths and infections than in any other country. Tens of millions of Americans also lost their jobs because of the protracted pandemic and waited months for Congress and Trump to act on much-needed relief packages. And after police killed George Floyd last spring, igniting protests across the country and around the world against racial injustice, many Americans wonder when and how the nation can make progress against systemic racism.

Three out of four Americans say the country is going in the wrong direction — the highest number in 20 years of Marist polling.

Three out of four Americans say the country is going in the wrong direction — the highest number in 20 years of Marist polling on that question. Given the current hurdles, Brown said the nation is hungry for leadership, but the road to that leadership has been beset with a historically troubled transition effort.

After Biden won a decisive victory with 306 Electoral College votes, Trump continued to deny he lost and spread misinformation alleging the election was rigged. The Biden administration has said the Trump White House was dragging its feet on assisting the incoming presidency and acting in ways that “feel like sabotage.” After a pro-Trump mob stormed the Capitol on Jan. 6, fueled by the president’s divisive rhetoric and attacks on election integrity, Trump announced that he would not be attending Biden’s inauguration. The potential for further violence has necessitated heightened security around the Capitol on and in the days leading up to Inauguration Day, and fears about a possible insider attack perpetrated by military service members have prompted the FBI to vet the tens of thousands of National Guard troops in town to protect the event, the Associated Press reported. 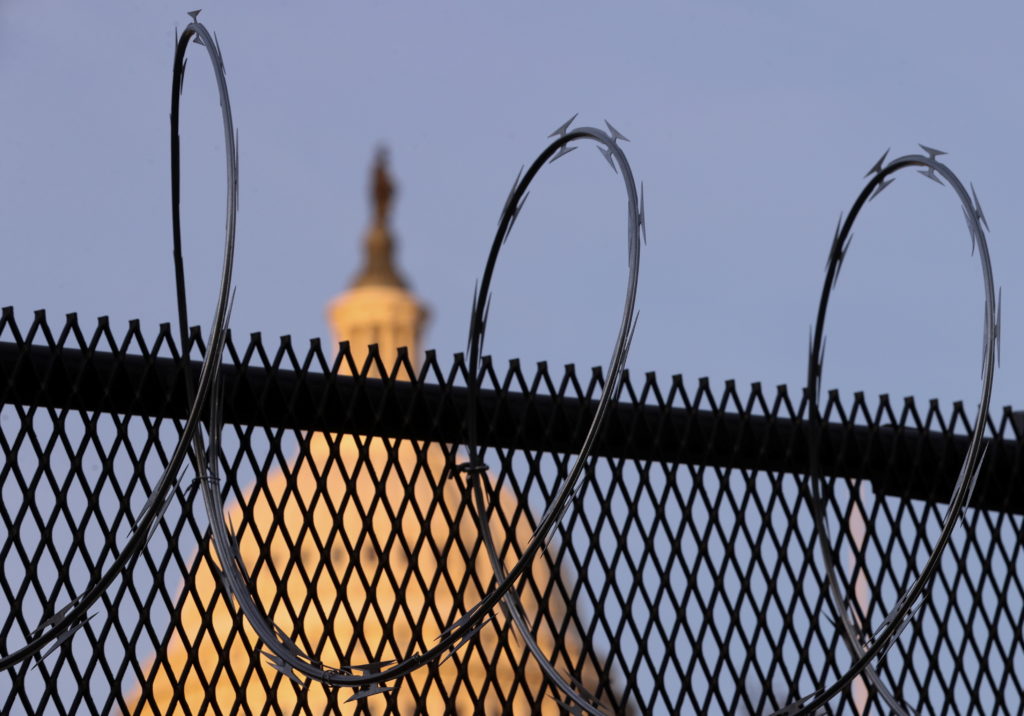 Newly-installed razor wire tops the unscalable fence surrounding the U.S. Capitol in the wake of the January 6th riot and ahead of the upcoming inauguration in Washington, U.S. January 14, 2021. Photo by Jonathan Ernst/REUTERS

The “cooperative handoff” is the norm of modern presidencies in the U.S., including when there is a change in parties, said Max Stier, president and CEO of the Partnership for Public Service, which oversees the nonpartisan Center for Presidential Transition. He called the transition between the Trump and Biden administrations “extraordinarily unusual.”

The turmoil evident in the transition offers “a national civics lesson” on the importance of a functioning government,” Stier said, adding that, when it comes to the security of the country, Trump “is not exiting in a safe way.”