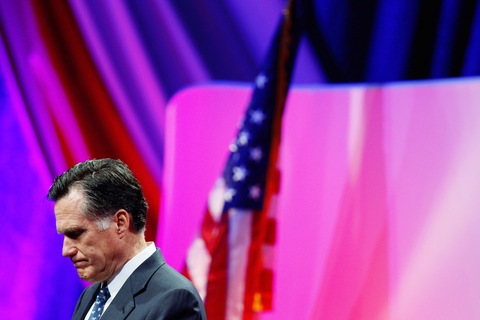 Mitt Romney is clearly the man to beat for the GOP presidential nomination, and new ABC/Washington Post poll numbers show his greatest strength is being seen as the Republican most able to beat President Obama next fall.

Electability is a great strength to have when making a pitch to an energized Republican electorate with a vulnerable incumbent Democratic president in their sights. Thirty-three percent of Republicans say Romney is the candidate most likely to defeat President Obama. He’s running 12 points better on that score than his closest competitor.

Unfortunately for Romney, it may not be sufficient. The ABC/Washington Post poll tested a number of candidate attributes and found Romney is running even or behind on each of them other than electability. It’s that assessment of him by the Republican primary electorate that is keeping his ceiling down in the mid-20 percent range and provides his greatest challenge in getting to the nomination.

Dan Balz and Jon Cohen of the Washington Post:

In the other five areas tested in the new survey, Romney shows no greater strength than other GOP contenders. On empathy, 21 percent say Cain is the one who best understands their problems, compared with Romney’s 17 percent. On honesty, it’s Cain at 22 percent, Romney at 17 percent. The two also run closely on the economy and issues generally, while Newt Gingrich rivals Romney on upholding core Republican values.

The Post-ABC survey highlights the divide within the party between the most conservative Republicans and all others. Romney’s candidacy will be directly affected by the composition of the primary and caucus electorates. The more conservative the electorate, the more challenged he could be.

In data released Friday, Cain leads Romney 2-to-1 (30 percent to 15 percent) among those who describe themselves as very conservative. These Republicans were the least likely to rank Romney higher than his rivals on the attributes tested in the survey.

And ABC’s Gary Langer notes that Romney’s Massachusetts health care plan is a particularly acute problem for him among Republican voters.

Romney’s role in enacting mandatory health care while governor of Massachusetts, however, is another matter: Far more potential Republican voters, 48 percent, say this makes them less likely to back him, including a third much less likely. Seniors and lower-income Republicans stand out as more critical of Romney on this issue, as do conservatives compared with moderates.

Romney will spend the next two months working to convince Republicans in Iowa, South Carolina and Florida, as well as across the country, that he is not just capable of beating President Obama, but he will also be their ideological champion in Washington. If he can make that sale, he’ll have the nomination locked up pretty quickly.

Herman Cain insists “everything has been answered” about the sexual harassment allegations that surfaced eight days ago in POLITICO, but some Republicans are channeling their inner Lee Corso and saying, “Not so fast, my friend.”

At a campaign event over the weekend in Texas, Cain scolded reporters for trying to ask about the harassment accusations, which stem from his time as head of the National Restaurant Association in the 1990s. “Don’t even go there,” Cain said, before calling on his chief of staff to provide the herd with a copy of “the journalistic code of ethics.”

“We are getting back on message. End of story,” Cain declared.

But on Sunday, two Republicans — including presidential candidate Jon Huntsman — asserted that Cain had yet to fully respond to the allegations.

“Legitimate questions have been raised and that information has to come forward,” the former Utah governor said on the NBC’s “Meet the Press.”

“It’s up to Herman Cain to get the information out and get it out in total,” he added.

Mississippi Gov. Haley Barbour, who also appeared on “Meet the Press,” said, “People need to know what the facts are,” and instructed Cain to “get those out as quickly as possible.”

That the story has been public for more than a week and questions are still being raised speaks to Cain’s mishandling of the controversy, which polls now show appear to be damaging his support among Republican voters.

A new Reuters/Ipsos poll found the percentage of Republicans who view Cain favorably dropped nine points, to 57 percent, from 66 percent a week ago.

Cain is set to appear Monday night on ABC’s “Jimmy Kimmel Live!” — a setting that will not afford him the opportunity to dismiss questions about the controversy by telling the host to read his ethics code. If such a code exists for late-night comedians, it almost certainly includes pressing political candidates about harassment allegations when they appear on set.

Former President Bill Clinton weighed in on the 2012 election in an interview with USA TODAY’s Susan Page published Monday.

As Page writes, Clinton was “classically Clintoneseque” in discussing politics and policy.

Clinton acknowledges that no modern president has won a second term when the jobless rate is as high as even White House economists predict it will be on Election Day 2012.

“Well, that’s what the Republicans are banking on,” he told USA TODAY. “But the American people have a funny way of figuring. If they decide that the unemployment rate is that high because the Congress refused to work with the president and their numbers remain markedly lower than his, he might win anyway. I still think he’s in pretty good shape.”

There’s also this interesting nugget offered up by Clinton in his new book (and followed up on by Page) about how he and Vice President Joe Biden had tried to get the Democratic National Committee to send out centralized talking points in the run-up to the 2010 election, but “couldn’t persuade the decision-makers to do so.”

“It was bizarre,” Clinton says with exasperation. “Biden and I actually wrote these seven talking points,” laying out what Democrats stood for and contrasting it with the Republican agenda.

“They said that House Democrats would just have to be on their own because they had too many differences on health care and climate change,” he says. Senate Majority Leader “Harry Reid was fine about it. It was all about the differences in the House.”