As the Oct. 14 deadline for voter registration in New York state approaches, Ahmed Mohammed, an operating officer in Queens for the Arab-American Family Support Center, has been pushing to get more people in his community to sign up to vote.

In recent months, New York City has tripled the number of languages available on voter registration forms, a measure the city’s mayor said would expand voting participation. Mayor Bill de Blasio announced the addition of five new languages, including Arabic, in July, with another six added in September, raising the total number of languages for the voter registration process in New York City to 16.

“No one should be disenfranchised because of their language,” de Blasio said, during the program’s unveiling.

About a third of his group have become naturalized citizens after immigrating to the U.S. from Middle Eastern and East Asian countries. Mohammed said many prospective voters are limited by language barriers, despite living in the country for decades.

“Most of the people are parents, mothers and fathers,” he said. “They don’t know how to speak the language even now.” 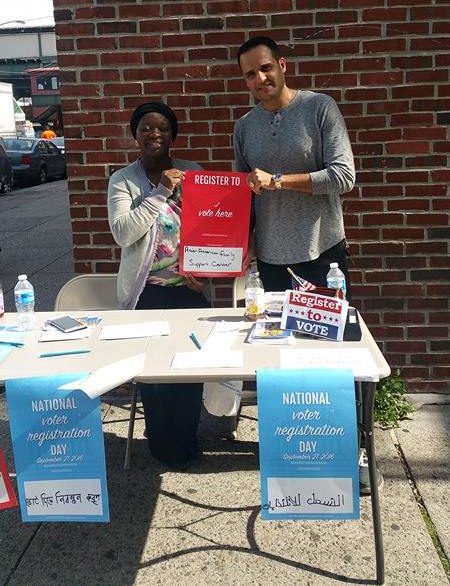 More than half of the 1.6 million immigrants living in New York City are citizens and 853,000 people residing in the city speak languages other than English, according to the New York City Mayor’s Office of Immigrant Affairs (MOIA).

The city looked at data collected by the U.S. Census Bureau to determine what languages are most prevalent among voters who may not be proficient in English. Those added this summer were the languages spoken most commonly at home.

A year after the Voting Rights Act of 1975, a section of which requires alternative language accessibility on voting material based on the number of minority-language speakers living in a county, Spanish became the first language outside of English to be incorporated into the city’s voting process. Chinese was added in 1992, followed by Korean in 2003 and Bangla in 2013.

Because of the federal mandate, those languages are also required to be available on ballots at polling places in New York in addition to voter registration forms.

In July, under a directive issued by de Blasio, the city added Russian, Urdu, Haitian Creole, French and Arabic to voter registration forms. They were followed in September by Albanian, Greek, Italian, Polish, Tagalog and Yiddish.

These languages are not required by federal law, but the city added them to provide voting material separate from the federal requirements, according to MOIA. Because they are a voluntary initiative, the new languages are available only on voter registration forms and will not be on the ballots for the Nov. 8 election.

But more than 90 percent of people considered limited-English proficient can now register to vote in New York, according to Nisha Agarwal, MOIA’s commissioner.

She said there are more than 200 languages spoken in “the most diverse city in America,” and increasing the number of languages for voter registration has broadened accessibility in New York.

Citizens who might benefit from the language changes often grow up in the U.S. speaking English as a second language or are more comfortable filling out government forms in their native languages, MOIA said. Others are able to bypass an English test required for citizenship because of their age or the amount of time they have already spent in the country.

The new forms can be found on websites for the city’s Campaign Finance Board and official government site, as well as in city libraries, post offices and other municipal buildings. Local organizations representing immigrant communities also have made an effort to register new voters.

Matthew Sollars, a spokesperson for the New York City Campaign Finance Board, said voters who registered, but whose languages are not on the ballots, are allowed to bring someone along with them when casting their votes when translators aren’t provided.

“But if you aren’t registered then all that other stuff doesn’t even matter,” he said. 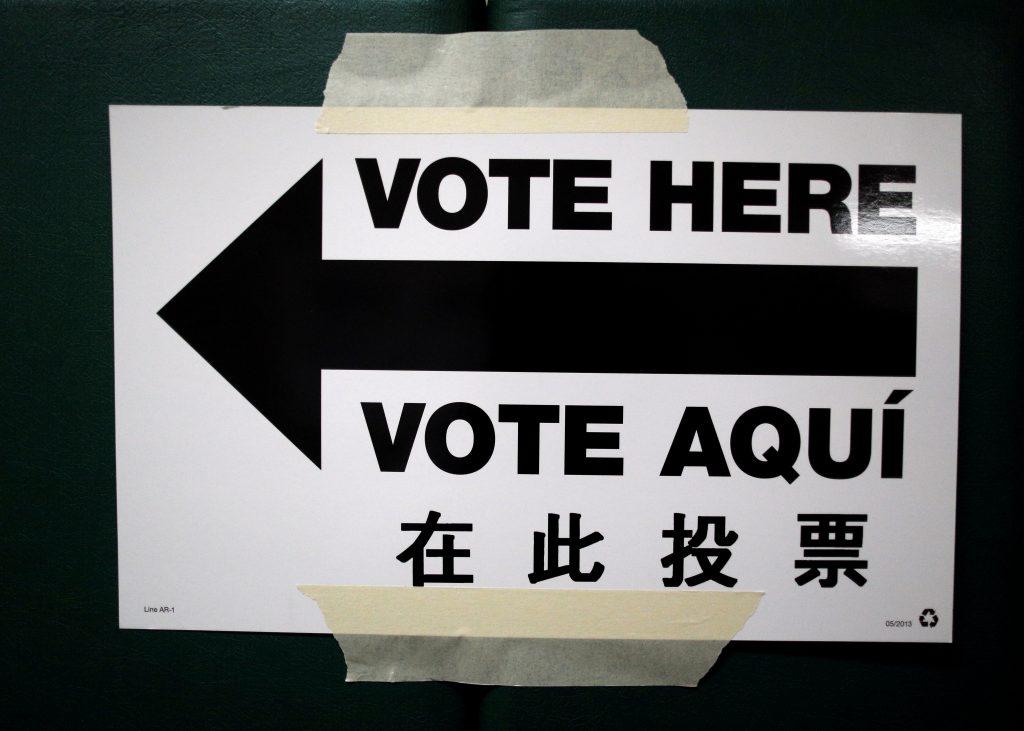 A “Vote Here” sign, in multiple languages, is seen at a polling station for the New York primary elections in the Brooklyn borough of New York City, U.S., April 19, 2016. Photo by Brendan McDermid/Reuters

Jonathan Brater, counsel for New York University’s Brennan Center for Justice Democracy program, said while Asian and Latino Americans are among the fastest-growing minority voters in the U.S., their registration and voting rates lag behind white and black voters.

“If you look at 2008 and 2012, you’ll find that black and white turnout was not as equal percentage-wise,” he said. “Having people being able to see the candidates’ names and understand the material is a critical part of bridging the gap in participation.”

Amaha Kassa, executive director of African Communities Together in the Bronx, an organization representing more than 20,000 French-speaking Africans living in New York, said the group worked with the city as a consultant on French-language voter registration forms and “proposed a good number of changes” before they were installed.

“The citywide languages were never meant to be a ceiling, they were meant to be a floor,” Kassa said. “I do think that we could do more to make polling places accessible. This starts the process for people to get registered to be eligible.”

He said the city’s language access policies began in some city agencies during the administration of former Mayor Michael Bloomberg, before it expanded to the voter registration process under a directive issued more recently by de Blasio.

While MOIA says it does not have projections on how many voters have participated in the process since the new translations were made available, Kassa and Mohammed said attempts to register citizens from their communities have gotten off to a slow start. 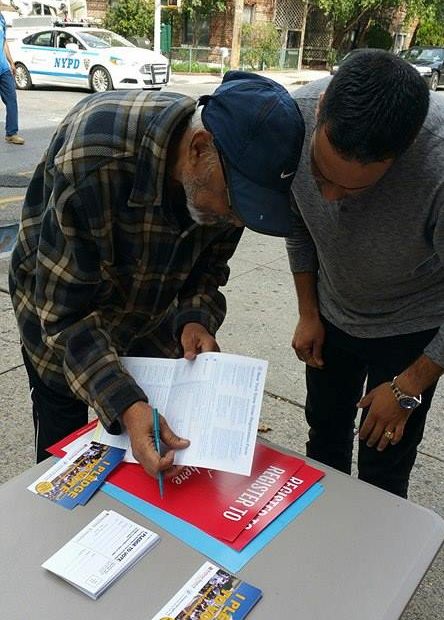 Mohammed helped a U.S. citizens in his community in September to register to vote. Photo By Arab-American Family Support Center

Mohammed said he began attempting to register people to vote in early September but during the first several weeks only managed to sign up 12 people out of the hundreds to whom he had reached out. After immigrating to the States, often from non-Democratic countries, some people in Mohammed’s community expressed fears about giving out their personal information.

“They need to be educated that this information is confidential,” he said, noting that in one instance, he walked to mailbox with a person who was registering to vote to prove their information was safe.

But a late flurry of registrations came last week. After he set up a table near a local mosque on National Voter Registration Day, Mohammed wrangled a few dozen more people to register. Between its Brooklyn and Queens locations, the organization has registered roughly 90 people who are now eligible to vote.

“I said, Let’s have a seat there and see what’s going to happen,” he said. “Some of them just tell their information because they don’t know how to write in English.”

Spain reports no virus deaths for first time since March

Biden doesn’t have the delegates to clinch the nomination. That could change June 2.