No course correction for state Republicans after Trump test

HARRISBURG, Pa. — Republican governors and lawmakers in many states have followed President Donald Trump’s lead on their response to the coronavirus, declining to impose mask mandates and pushing to lift restrictions on businesses and social gatherings as swiftly as possible.

Revelations that the president and first lady are now among those who have tested positive for the disease appeared to do little to change their thinking.

In the hours after the nation learned that Trump had tested positive for the virus, Republican-controlled courts, conservative groups and Republican lawmakers continued to move against mask mandates and other coronavirus restrictions.

In Michigan on Friday, the state Supreme Court, which has a Republican majority, struck down months of orders by Gov. Gretchen Whitmer, including a mask mandate, that were aimed at preventing the spread of the coronavirus. It said she illegally drew authority from a 1945 law that doesn’t apply.

It was an extraordinary development in a long, nasty fight between Whitmer, a Democrat, and Republicans who control the Legislature. At one point over the summer, protesters and an armed militia filled the statehouse to demand an end to the restrictions some labeled “tyranny.”

Right before Friday’s ruling, a conservative group, with support from Republican lawmakers, turned in 539,000 signatures to put legislation before lawmakers to repeal the 75-year-old law. Whitmer would be unable to veto it if it passes.

Also Friday, Republicans who control the Louisiana House of Representatives supported a package of measures aimed at unraveling the state’s coronavirus restrictions imposed by Gov. John Bel Edwards, a Democrat.

“I don’t think that the president having COVID is any more important than every Louisianian that’s had COVID, so it doesn’t really change my perspective on it,” said Rep. Julie Emerson, a Republican from a suburban area in southcentral Louisiana.

Rep. Tanner Magee, the chamber’s No. 2 Republican from a seafood and oil industry hub in southeastern Louisiana, said it’s “a false narrative” that Republicans are not concerned about public health.

“We are. We’re just concerned about both public health and the state of our economy and seeing how we can move forward in a way that addresses both issues,” Magee said.

In Wisconsin, which is third in the nation in new cases per capita, according to the COVID Tracking Project, Republicans who control the Legislature filed a court motion Friday in support of a lawsuit seeking to repeal a mask mandate under Gov. Tony Evers, a Democrat.

That prompted a Twitter response from Lt. Gov. Mandela Barnes, a Democrat: “Republican legislators have officially joined Covid-19 in the fight against Wisconsinites.”

The motion came even as virus cases there are rising quickly.

“There is no pandemic exception to the rule of law or our Constitution,” said Rick Esenberg, president of the conservative Wisconsin Institute for Law and Liberty, which is suing Evers over the mask mandate.

Similar power struggles have played out ever since the beginning of the virus outbreak in numerous states, mostly where the governor is a Democrat and Republicans control the legislature. Kansas has had one of the longest running feuds, since Democratic Gov. Laura Kelly closed schools in March and imposed stay-at-home orders and restrictions on businesses and social gatherings. Republican lawmakers, who already had forced Kelly to accept local control over coronavirus restrictions, are now considering creating a panel with permanent oversight of how the governor handles extended emergencies.

In GOP-controlled Legislatures in Ohio, Michigan and Pennsylvania, Democrats pushed Republican majority leaders to toughen their policy on masks for lawmakers on official business, force Republican members to actually comply with it or simply implement one.

Ohio state Rep. Kent Smith, a Democrat from suburban Cleveland, said it isn’t known how many Republican lawmakers from the state interacted with Trump — who was there Tuesday for the debate with Democratic presidential nominee Joe Biden — or his entourage in recent days. He asked for a mask mandate for committee hearings and floor sessions.

“The work of the people need not become a super spreader event during a global pandemic without a treatment or cure,” he said in a statement.

Some Republicans, including Ohio Senate President Larry Obhof, said they were comfortable with the existing protocols, while others said they cannot force rank-and-file lawmakers to obey them.

On Thursday, the Pennsylvania House of Representatives canceled its floor session on the news that a second Republican member had tested positive.

Trump’s reckless approach has seeped down to his Republican counterparts, who have blocked a resolution to enshrine a mask mandate into the chamber’s rules, Dermody said. 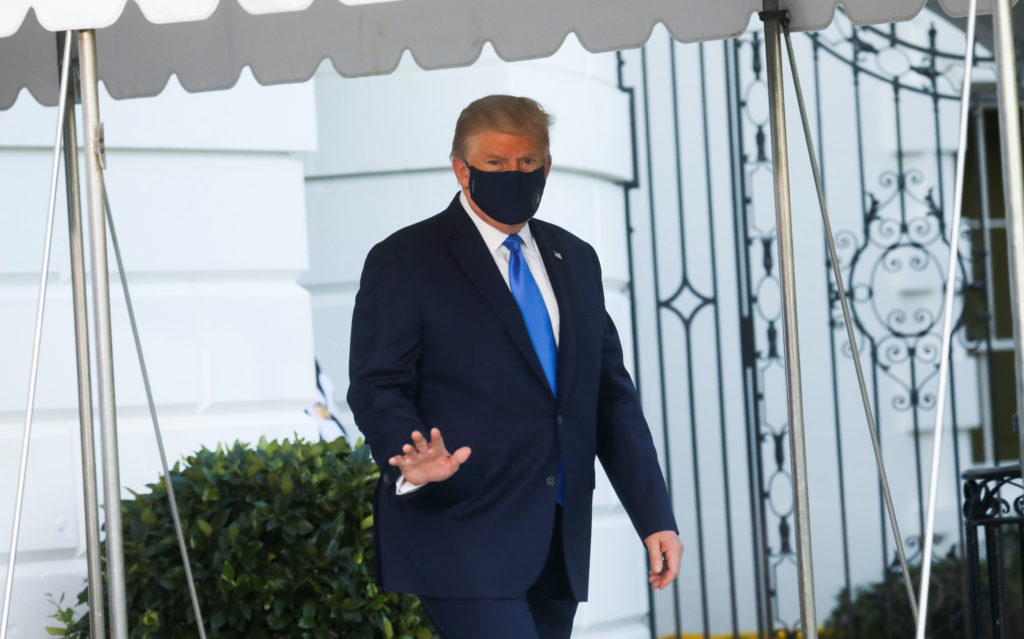 U.S. President Donald Trump waves as he walks out to the Marine One helicopter to fly to Walter Reed National Military Medical Center after testing positive for the coronavirus disease (COVID-19), from the South Lawn at the White House in Washington, U.S., October 2, 2020. Photo by Leah Millis/Reuters.

Rep. Dan Moul, a Republican from rural southern Pennsylvania, said it has nothing to do with Trump. He almost always wears a mask when he enters a business, Moul said, he but doesn’t on the House floor because he’s around friends.

“When it’s my turn to get it, I’m going to get it, whether I’m wearing a mask or not,” Moul said.

The virus is a leading issue in the campaign for governor in Missouri, where Republican Gov. Mike Parson, a staunch Trump supporter, is recovering after testing positive. Rising case counts have made Missouri 15th in the nation in new cases per capita, according to the COVID Tracking Project.

Parson has taken a more hands-off approach to addressing the virus, leaving decisions on mask requirements, school shutdowns and other restrictions to local officials, and his representatives gave no hint that he would change.

He will continue to follow safety protocols to protect his health and those around him, and encourage mask-wearing and social distancing, a spokesperson said Friday.

His Democratic challenger, Nicole Galloway, said Parson’s and Trump’s diagnoses are proof that anyone can get the virus. She pushed Parson to live up to White House guidance on testing, contact tracing and a statewide mask mandate.

“This is the best way to put our state on the path to economic recovery,” Galloway said.

Parson isn’t the only Republican governor who said their decisions would not be affected by Trump’s diagnosis. A spokesman for Florida Gov. Ron DeSantis, who has been aggressively lifting restrictions on restaurants and other businesses despite concerns of a resurgence, said the governor isn’t going to change the state’s reopening plans just because the president contracted the virus.

Left: Gov. Mike Parson talks to the media following remarks by Deborah Birx, coronavirus response coordinator for the White House Coronavirus Task Force, on Tuesday after a roundtable meeting with Parson and state health officials and cabinet members about how to contain COVID-19. Photo provided by USA TODAY NETWORK via Reuters