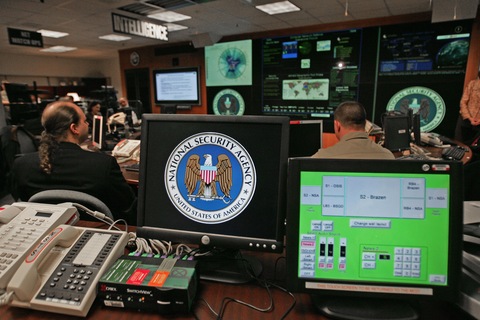 A look inside the NSA Threat Operations Center located at Fort Meade, Maryland.

“They quite literally can watch your ideas form as you type.”

That’s the memorable closing quote from an unnamed “career intelligence officer” who provided the Washington Post with details about a secret government program to collect information Americans put online.

The story summarizes a broad data mining effort by the National Security Agency and the FBI to extract from the servers of nine Internet companies — including Google, Facebook, Apple and Microsoft — “audio, video, photographs, e-mails, documents and connection logs that enable analysts to track a person’s movements and contacts over time.”

The classified “PRISM” program was established in 2007, the Post reported. Barton Gellman and Laura Poitras went live with the story Thursday night, as the nation grappled with reports that had surfaced the night before about the NSA collecting phone records under the Foreign Surveillance Intelligence Act.

The pair reported that over the last six years, PRISM has become “the most prolific contributor to the President’s Daily Brief.” And NSA reporting “increasingly relies” on the program, “accounting for nearly 1 in 7 intelligence reports.” From the piece:

That is a remarkable figure in an agency that measures annual intake in the trillions of communications. It is all the more striking because the NSA, whose lawful mission is foreign intelligence, is reaching deep inside the machinery of American companies that host hundreds of millions of American-held accounts on American soil.

The technology companies, which participate knowingly in PRISM operations, include most of the dominant global players in Silicon Valley. They are listed on a roster that bears their logos in order of entry into the program: “Microsoft, Yahoo, Google, Facebook, PalTalk, AOL, Skype, YouTube, Apple.” PalTalk, although much smaller, has hosted significant traffic during the Arab Spring and in the ongoing Syrian civil war.

Dropbox , the cloud storage and synchronization service, is described as “coming soon.”

The entire story, presumably in the works long before the Guardian story about the collection of millions of Americans’ phone records was published, is worth a read.

Among the important points to keep in mind as the debate ignites anew in Washington: these actions appear to be legal, all authorized by Congress during the George W. Bush administration as part of the war on terror. And it’s President Barack Obama who has gotten the most utility out of the government’s data collection, and who now is expected to answer for it.

Politico gets at the heart of this idea with a pair of stories Friday. Glenn Thrush suggests Mr. Obama is living out a “fourth Bush term.” And Darren Samuelsohn looks at the frequent liberal Bush critics who have now turned to go after Mr. Obama. From the story:

“The president said that I must return to my authentic self. And I think the president needs to go back and read his own speeches,” said Rep. Elijah Cummings, implying Obama could use a refresher course on some of his own 2008 campaign rhetoric — when he spoke openly about not becoming part of the conventional politics of Washington.

Others likened him to Bush, directly.

“I’m very concerned that this is basically a continuation of the policies of the Bush administration and the abuses of the Patriot Act. I’d like to see better out of this administration,” said Rep. Peter DeFazio, an Oregon Democrat who noted he’s long been game to question Obama’s priorities.

As we noted Thursday, the Guardian detailed a program involving Verizon. While Verizon did not officially comment, the organization made clear through other channels that they were just a small part of the bigger picture.

The company was ordered to turn over the records and couldn’t say no, and the data collection is “industry wide,” a source told the NewsHour.

Members of Congress spent most of Thursday defending the program.

The director of national intelligence, James Clapper, released a statement Thursday night that charged the articles in the Washington Post and the Guardian “contain numerous inaccuracies.”

“Information collected under this program is among the most important and valuable foreign intelligence information we collect, and is used to protect our nation from a wide variety of threats,” Clapper added. “The unauthorized disclosure of information about this important and entirely legal program is reprehensible and risks important protections for the security of Americans.”

On Friday, the Wall Street Journal reported the NSA’s monitoring of activities included “customer records from the three major phone networks as well as emails and Web searches, and the agency also has cataloged credit-card transactions.”

The president could address the subject Friday in California, where he begins a two-day summit with Chinese President Xi Jinping. Cyber security, and particularly China’s spying on U.S. companies, is expected to be on the agenda. But the reports of the past few days also mean there will be plenty of questions for Mr. Obama about his administration’s intelligence operations. He did not tackle the subject Thursday at a pair of private Democratic fundraisers in the Bay Area.

Jeff Brown unpacked all of this in a debate Thursday night. He spoke with Col. Cedric Leighton, a former NSA official, and Kate Martin of the Center for National Security Studies.

Martin said she was “astounded” by the news and dismissed House Intelligence Committee Chairman Rep. Mike Rogers’ claim that the program has recently thwarted a terrorist attack. Leighton said it all depends on how the collection is done.

Online Politics Production Assistant Meena Ganesan also dug through the archives for some of the NewsHour’s best debates on this issue during the Bush administration. Among the finds: Mark Shields and David Brooks. The guys will weigh in again on Friday night’s show.

Watch the announcement here or below.

Am guessing the NSA already has a pretty good idea of what today’s jobs report is going to look like.

.@sentedcruz and I bet our FL colleagues TX beer on #NBAFinals. Sad they won’t get to try Shiner. #GoSpursGo

This Scalia dissent on the DNA case has relevance for the #NSA metadata database.law.cornell.edu/supremecourt/t…

Could it be arranged for him to stay there? RT @spaceteam: Justin Bieber set to jet into space on.flatoday.com/187r5Ia

With appointment of Jeff Chiesa, NJ, KY & SC now tied for most appointed U.S. Senators since 1913, with 8 each. #NJsen

My #Fragers memory: A snow day when they cancelled votes, so I went there, bought some sleds and enjoyed the snow. twitter.com/DWStweets/stat…

Holder says “whoever is going to be attorney general in a year or two years.” which seems a little odd for someone planning to stay, no?

I’m very disappointed House Republicans voted to put thousands of DREAMers at risk of deportation. Their bill is dead on arrival in Senate.

Simone Pathe contributed to this report.