Obama, Romney Look to Define Campaign on Their Terms 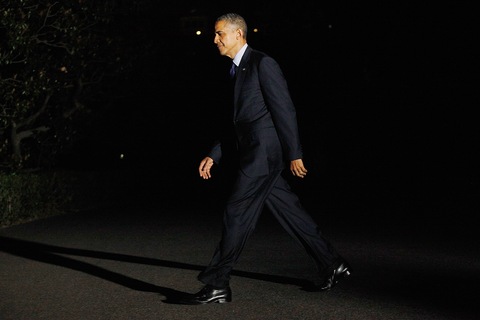 That has become the race within the race of the 2012 campaign as three consecutive months of discouraging employment reports have taken their toll on the president’s standing among the American people.

The latest New York Times-CBS News poll released Wednesday found a downward shift in public opinion about the president’s handling of the economy, with 39 percent saying they approved and 55 percent responding they disapproved. In April’s Times-CBS survey the president had a 44 percent approval mark on the economy compared to 48 percent disapproval.

Sixty-four percent of respondents said Mr. Obama’s policies contributed a lot or some to the economic downturn, although 81 percent said the same for former President George W. Bush.

The Times-CBS poll was in the field as the president’s campaign hammered away at Romney’s refusal to release additional years of his tax returns and his connections to the private equity firm Bain Capital.

Six in 10 respondents told pollsters that Romney’s experience as the head of Bain would have no effect on their vote. Fourteen percent said it would make them more likely to vote for him while 23 percent said it makes them less likely to cast their ballot for Romney.

Seventy-three percent of those surveyed also said that Romney’s personal wealth, estimated at upwards of $250 million, would have no effect on their vote.

Still, there remains a perception that the policies Romney would pursue if elected would benefit the wealthy over middle class and poor Americans.

The poll also shows the two candidates in a dead heat nationally, with Romney at 47 percent to 46 for the president. That is within the poll’s sampling error of plus-or-minus three percentage points. The president and Romney were tied at 46 percent each in April.

But the winner of November’s election will likely be decided by a few key states that are receiving the bulk of the attention from the two campaigns.

One of the most highly sought-after battlegrounds is Virginia, where the president and Romney are deadlocked at 44 percent apiece according to a new survey by Quinnipiac University. Last month the president held a 47 to 42 percent lead in that poll.

Half of Virginia voters say the president does not deserve to be re-elected and Romney holds a narrow three-point advantage, 47 to 44 percent, when it comes to which candidate would do a better job on the economy.

There is strong support among Virginians, however, for the president’s proposal to raise income tax rates on households earning more than $250,000 per year, with 59 percent backing the policy compared to 36 percent opposed.

WAITING ON THE PICK

In Washington, pundits and journalists are speculating incessantly about when Romney will announce his running mate.

Wednesday, the presumptive GOP nominee told a town hall in Bowling Green, Ohio he had not yet made his decision, but assured a concerned woman who asked if he would have his “ear to the tea party” that the person he chooses will “have conservative principles.”

Romney next week will embark on a trip to London and Israel, so the smart money is on the news coming either before he leaves, or once he gets back. A fundraising contest for Romney supporters to donate for a chance to sit down with the new veep pick closes in 24 hours, and people have even been reading between those tea leaves.

As timing for the major event is still unclear, plans for Romney’s nominating convention are taking shape. Officials let word leak out that New Jersey Gov. Chris Christie will be the keynote speaker in Tampa, a nod to voters who had wanted the Republican to be considered for the No. 2 position.

Two new, less formal polls look at his question as well, with former Secretary of State Condoleezza Rice leading the pack in a Fox News poll and Sen. Marco Rubio as the favorite of 8,000 activists surveyed by the Tea Party Express. In that poll, conducted via mail-in ballot, Rubio led Rep. Paul Ryan of Wisconsin, and Rep. Allen West of Florida.

And keeping speculation of a northern pick alive, the New Hampshire Union Leader’s John DiStaso reports Romney will campaign with Sen. Kelly Ayotte at a lumber wholesaler in Bow, N.H., on Friday.

At the height of campaign season, and while under extra scrutiny as a potential vice presidential pick, Sen.Rob Portman (R-Ohio) is on a quixotic bid to reform how the miscellaneous tariff bill is crafted. In the process, he’s going against the Republican Ways and Means Committee chairman — a close friend, as it happens — while giving bipartisan cover to a vulnerable Democratic Senator.

We may be hearing from Romney as early as this afternoon. Watch the NewsHour’s site for the latest on the veepstakes.

You can watch the video here or below.

Pawlenty to Cavuto on dull rap: “Neil, if you goad me into it, I’ll show you my tats”

Gov chats with super volunteer Lauren, who made over a thousand calls this week. #Mitt2012 twitter.com/dgjackson/stat…