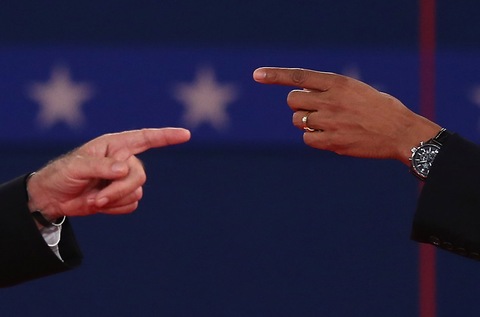 President Obama and Mitt Romney tangled early and often at their second debate Tuesday night, a feisty faceoff that underscored the heightened stakes of the campaign with just three weeks left until Election Day.

The president was aggressive from the start, criticizing his GOP rival for not supporting the rescue of the auto industry. He also hammered away at Romney’s tax proposal, telling the audience of 82 undecided voters at Hofstra University in Hempstead, N.Y., that the math simply did not add up.

Mr. Obama suggested that Romney would not have accepted such a deal if it had been presented to him when he was a business executive. “If somebody came to you, governor, with a plan that said, here, I want to spend $7 or $8 trillion and then we’re going to pay for it, but we can’t tell you until maybe after the election how we’re going to do it, you wouldn’t have taken such a sketchy deal,” the president said.

For his part, Romney seized on a question from a voter, who supported the president in 2008 but was not as optimistic this time around, to take apart the Mr. Obama’s economic record over the past four years.

“The president has tried, but his policies haven’t worked,” Romney said. “He’s great as a speaker and describing his plans and his vision. That’s wonderful, except we have a record to look at. And that record shows he just hasn’t been able to cut the deficit, to put in place reforms for Medicare and Social Security to preserve them, to get us the rising incomes we need.”

But the exchange of the evening came on Libya, an issue that has had Mr. Obama and his administration on the defensive in recent weeks. Secretary of State Hillary Clinton told CNN earlier Tuesday that she took responsibility for the September attack on the consulate in Benghazi that resulted in the deaths of four Americans, including the U.S. ambassador to Libya, Christopher Stevens.

Romney blasted Mr. Obama’s decision to leave Washington for a campaign trip to Nevada and Colorado the day following the incident and suggested that his handling of the situation raised questions about the administration’s “whole policy” in the Middle East.

“I think these actions taken by a president and a leader have symbolic significance, and perhaps even material significance in that you’d hope that during that time we could call in the people who were actually eyewitnesses,” Romney said.

President Obama said that as commander in chief he is “ultimately responsible” for what occurred in Libya and charged that Romney had played politics with a sensitive national security situation.

“The day after the attack, governor, I stood in the Rose Garden and I told the American people and the world that we are going to find out exactly what happened, that this was an act of terror, and I also said that we’re going to hunt down those who committed this crime,” Mr. Obama said. “And the suggestion that anybody on my team — whether the secretary of state, our U.N. ambassador — anybody on my team would play politics or mislead when we’ve lost four of our own, governor, is offensive. That’s not what we do. That’s not what I do as president. That’s not what I do as commander in chief.”

That led to this back-and-forth between Mr. Obama, Romney and moderator Candy Crowley of CNN:

ROMNEY: You said in the Rose Garden the day after the attack it was an act of terror? It was not a spontaneous demonstration?

ROMNEY: Is that what you’re saying?

ROMNEY: I want to make sure we get that for the record, because it took the president 14 days before he called the attack in Benghazi an act of terror.

PRESIDENT OBAMA: Get the transcript.

CROWLEY: He did, in fact, sir. So let me call it an act of terror in the Rose Garden. He used the word —

PRESIDENT OBAMA: Can you say that a little louder, Candy? (Applause.)

CROWLEY: He did call it an act of terror. It did, as well, take…two weeks or so for the whole idea of there being a riot out there about this tape to come out. You are correct about that. (Applause.)

The instant fact-check by Crowley undercut Romney’s attack and put Romney on the defensive in a situation that should have been ripe for a direct hit on the president. The topic is sure to come up again in next week’s debate, which is focused exclusively on foreign policy. It will be fascinating to see how Romney attempts to rebound from his failure to capitalize on the moment Tuesday night.

How did the the debate play across the country? Here’s a collection of headlines from the major dailies and some battleground state newspapers:

Polls taken after the debate gave President Obama a narrow win. A survey from the left-leaning Public Policy Polling of battleground Colorado voters found that Mr. Obama won the debate, 48 percent to 44 percent, while independents split, 58 percent to 36 percent, for the incumbent.

A CBS News instant poll found that 37 percent of uncommitted voters thought Mr. Obama won the debate, while 30 percent gave Romney the victory. A third of those polled said the night ended in a tie.

Another instant survey from CNN/ORC International also awarded the victory to Mr. Obama, with 46 percent of debate watchers giving him the win, compared to 39 percent who selected Romney.

Team NewsHour’s in-depth coverage Tuesday night included Gwen Ifill and Judy Woodruff co-anchoring the PBS election special, post-game analysis from columnists Mark Shields and David Brooks and a look at how the campaigns viewed the evening by NPR’s Ari Shapiro and Jonathan Martin of Politico. Jeffrey Brown also spoke with Christina and presidential historian Michael Beschloss to see how the encounter played out over social media and how it compared to debates past.

In light of the gender gap narrowing among women, Christina pointed out we were watching reactions of female voters all evening and how differently women in a “Walmart moms” focus group interpreted the evening’s verbal fisticuffs.

Watch the post-debate analysis here or below:

You can also watch the debate in full here or below.

The debate traveled far and wide on social media, with the question on immigration and Romney’s response to it generating the most interest on Twitter — 109,560 tweets per minute.

And a meme was born when the former Massachusetts governor discussed how his state Cabinet was filled with females. Talking about his efforts to recruit qualified women, Romney said, “I went to a number of women’s groups and said, ‘Can you help us find folks?’ And they brought us whole binders full of women.”

Instantly, partisans snapped up binder-related URLs and another excuse was created to run images of Hillary Clinton on her Blackberry. And, of course, there were tweets like this one:

Hari Sreenivasan and Christina answered questions from Twitter and Facebook in our NewsHour After Hours livestream. Watch that here or below.

Before the debate, Christina chatted with former George W. Bush speechwriter Michael Gerson about expectations for the evening. Watch that here We also hosted voters from Florida and North Carolina who each backed Mr. Obama in 2008 but aren’t sure what to do this time around. Watch that Google-plus hangout here.

Jeffrey Brown examined the foreign policy stances of the men on the ballot as Libya became a bigger issue Tuesday. He spoke with Zbigniew Brzezinski, the former national security adviser, and Walter Russell Mead of Bard College. They said that the United State’s position in the Middle East is unraveling, from the civil war in Syria to the stalled Israeli-Palestinian peace effort, and called for a substantive presidential debate on foreign policy. (The final meeting of the candidates Monday in Boca Raton, Fla., is expected to focus on global issues.)

Watch the setup to the conversation here or below.

And watch the discussion here or below:

“The Walking Dead” season 3 premiered Sunday — but what about “The Voting Dead?” See it here: twitter.com/Heritage/statu…

Ever wondered what it’d be like to run for Cong where the Karate Kid took place? Me too. @kyletrygstad explains it all tinyurl.com/cbugfp8

Interesting fact in light of tight Senate races this year: ALL counties in Massachusetts, Connecticut went blue in 2008 pres election