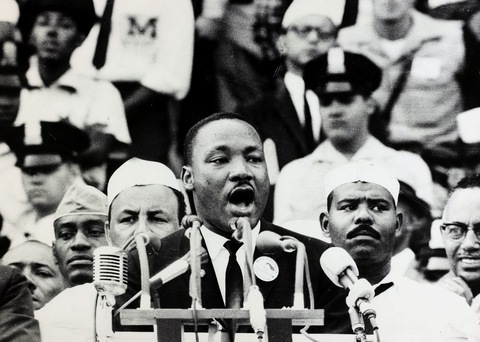 Fifty years ago, Martin Luther King Jr. proclaimed the day’s events would “go down in history as the greatest demonstration for freedom in the history of our nation.”

King’s dream and legacy are the central focus of a major ceremony Wednesday at the Lincoln Memorial in Washington. Former Presidents Bill Clinton and Jimmy Carter will join President Barack Obama at a bell-ringing ceremony at 3 p.m. to mark the moment. It’s the culmination of a days long recognition of the March on Washington at 50.

And we’re bringing you a special edition of the Morning Line and breaking the once-a-week recess schedule because at 6 p.m. Eastern we will air Gwen Ifill and Judy Woodruff’s exclusive interview with President Obama. Don’t miss their Instagram video announcing the news, another first for the NewsHour.

We are posting speeches from Wednesday’s events here.

The co-anchor duo will talk to the president in the Blue Room at the White House, soon after he delivers remarks at the Lincoln Memorial to commemorate King’s “I Have a Dream” speech.

The Associated Press previewed Wednesday’s events and reported that the president believes now “is a good time to reflect on how far the country has come and how far it still has to go, particularly after the Trayvon Martin shooting trial in Florida.”

And from The Washington Post’s look at the speech: “According to those he has spoken to, Obama will say that gay men and lesbians, women’s rights advocates, immigration activists, and African Americans must come together as a coordinated political movement to defendrights in peril, particularly at the ballot box, and to secure new ones in such areas as marriage equality and criminal sentencing.” In a radio interview Tuesday with Tom Joyner and Sybil Wilkes Mr. Obama said his aim is “just to celebrate the accomplishments of all of those folks whose shoulders we stand on and then remind people that the work is still out there for us to do.” He said a way to honor King is to do “the day-to-day work to make sure this is a more equal and more just society.”

King “would be amazed in many ways about the progress that we’ve made,” the president said.

The question is, does the ordinary person, day-to-day, can they succeed. And we have not made as much progress as we need to on that, and that is something that I spend all my time thinking about, is how do we give opportunity to everybody so if they work hard they can make it in this country.

Five decades ago, King stood at the Lincoln Memorial to outline his vision for how his dream could be achieved through nonviolent means.

He declared: “We have also come to this hallowed spot to remind America of the fierce urgency of now. This is no time to engage in the luxury of cooling off or to take the tranquilizing drug of gradualism. Now is the time to make real the promises of democracy.”

Consider how Mr. Obama used the “fierce urgency of now” phrase to frame his presidential candidacy less than six years ago, in remarks at Democratic events in Iowa and across the country.

From his speech to the Democratic National Committee in November 2007:

I am not in this race to fulfill some long-held ambitions or because I believe it’s somehow owed to me. I never expected to be here, I always knew this journey was improbable. I’ve never been on a journey that wasn’t.

I am running in this race because of what Dr. King called “the fierce urgency of now.” Because I believe that there’s such a thing as being too late. And that hour is almost upon us.

A nation healed. A world repaired. An America that believes again.

We quote from this speech in particular ahead of the president’s remarks at the NewsHour interview today because Mr. Obama will speak about his vision for equality 50 years later. The president will share how far he thinks the nation has come, and the economic and social disparities that remain.

The NewsHour has done a series of pieces tied to the 50-year anniversary, including Gwen’s conversation with Rep. John Lewis, the last living speaker from the 1963 March on Washington. That aired last night. Watch here or below.

Find our extensive and in-depth coverage of the March at 50 here, don’t miss our live stream of Wednesday’s 50th anniversary events, and tune in Wednesday at 6 p.m. eastern to watch our exclusive interview with the president.

A LOOK AT GOVERNING

During the slow August congressional recess, the NewsHour wanted to examine governing in Washington in an era of gridlock and hyperpartisanship. Jeffrey Brown started the discussion series by speaking with experts who could evaluate today’s Washington through the lens of history. Ray Suarez turned to a study of the people and power structure in Washington with Robert Draper and Mark Leibovich.

The series closed Tuesday night with a look at the people who make Washington the subject of fiction and drama. Jeff interviewed Beau Willimon, the co-creator and writer of the Netflix series “House of Cards” and the writer of the “Ides of March” screenplay, Jay Roach, who directed the comedy “The Campaign” and the television movies “Game Change” and “Recount,” and novelist and critic Thomas Mallon.

Willimon shared his insights about why he created Frances Underwood to be so ruthless, and Roach outlined why truth can sometimes be stranger than fiction.

Watch the final discussion here or below:

ICYMI: @JudyWoodruff and @gwenifill announce via Instagram that they’ll be interviewing Obama tomorrow at the WH http://t.co/9eIJQI6qrH

Another lawmaker here 50 years ago was Senate GOP Leader Mitch McConnell; he was a Congressional intern then

JFK’s ambassador to Japan said RFK was his most important channel to the President. attn: CBK

Rep Paul Ryan proudly displays a degree, his “Doctorate of Hamburgerology” from McDonalds, in his Capitol Hill office pic.twitter.com/bC5dJxKLxg