FLINT, Mich. — Calling Joe Biden his “brother,” Barack Obama on Saturday accused Donald Trump of failing to take the coronavirus pandemic and the presidency seriously as Democrats leaned on America’s first Black president to energize Black voters in battleground Michigan on the final weekend of the 2020 campaign.

Obama, the 44th president, and Biden, his vice president who wants to be the 46th, held drive-in rallies in Flint and Detroit, predominantly Black cities where strong turnout will be essential to swing the longtime Democratic state to Biden’s column after Trump won it in 2016.

The memories of Trump’s win in Michigan and the rest of the Upper Midwest are still searing in the minds of many Democrats during this closing stretch before Tuesday’s election. That leaves Biden in the position of holding a consistent lead in the national polls and an advantage in most battlegrounds, including Michigan, yet still facing anxiety it could all slip away.

As of Saturday morning, nearly 90 million voters had already cast ballots nationwide, according to a tally by The Associated Press. Tens of millions more will vote by the time polls close on Tuesday night.

Obama said he initially hoped “for the country’s sake” that Trump “might take the job seriously. He never has.”

The former president, addressing voters in dozens of cars in a Flint high school parking lot, seized on Trump’s continued focus on the size of his campaign crowds.

“Did no one come to his birthday party when he was a kid? Was he traumatized?” Obama mocked. “The country’s going through a pandemic. That’s not what you’re supposed to be worrying about.” 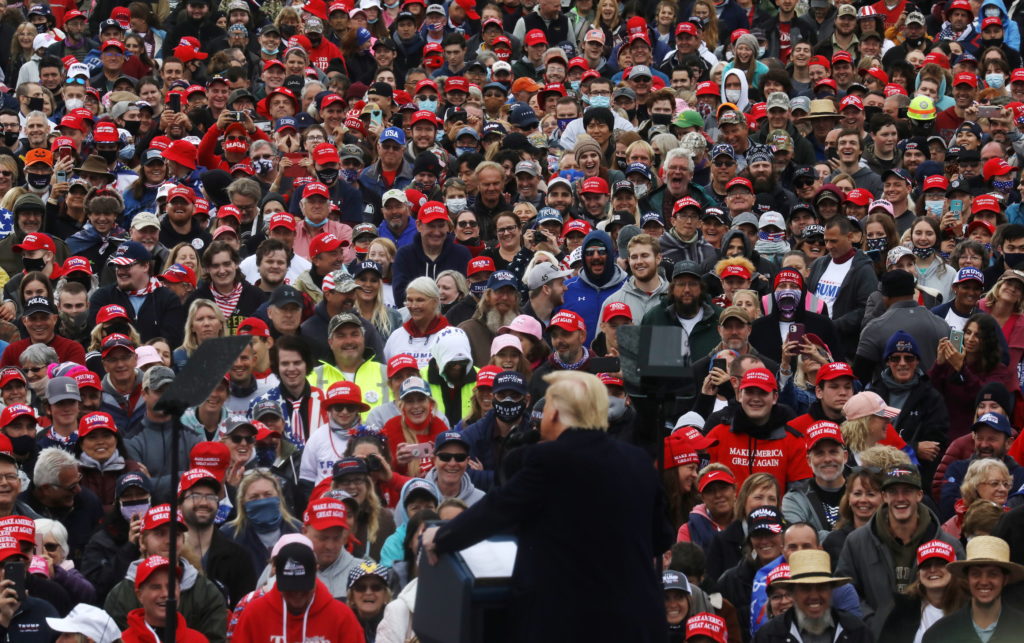 Trump made an aggressive play for pivotal Pennsylvania, focusing largely on his white, working-class base. His first of four scheduled stops in Pennsylvania was in a small town in Bucks County on the eastern edge of the state.

Repeating what has become a consistent part of his closing message, Trump raised baseless concerns about election fraud, pointing specifically at Philadelphia, a city whose large African American population is key to Biden’s fate in the state.

“They say you have to be very, very careful — what happens in Philadelphia,” Trump charged. “Everybody has to watch.”

The president also railed against a recent Supreme Court ruling that will allow Pennsylvania to count mail ballots received as many as three days after polls close.

The extra time, Trump alleged without evidence, would allow for fraud and potentially deny him a win in the state. “What’s going on?” he asked during a late afternoon rally in Reading, Pennsylvania. “That was a very disappointing opinion, but I’ve had many disappointing opinions from the Supreme Court.”

Several studies, including one commissioned by Trump himself, have failed to uncover any significant examples of election fraud. Good-government advocacy groups are concerned that the president’s repeated calls for his supporters to monitor the polls may lead to widespread voter intimidation.

Republicans are betting that Trump can win a second term by driving up turnout among his strongest supporters — white, noncollege-educated men and rural voters — while limiting Biden’s advantage with Blacks and Latinos. Democrats in several swing states worry that voters of color may not be excited enough about Biden to show up in the numbers they need. 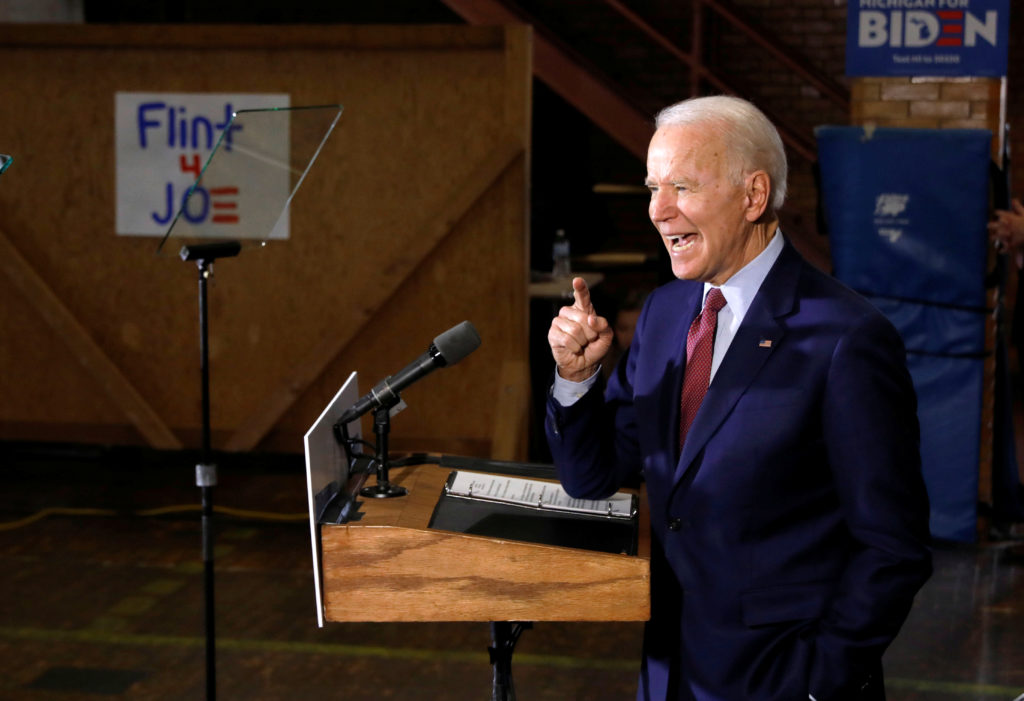 In Michigan, Rep. Dan Kildee, a Democrat who represents the Flint area, said he had been pressing for a couple of months for Biden or Obama to visit the majority Black city where a water crisis that began in 2014 sickened the city’s residents, exposing stark racial inequities.

“Showing up matters,” Kildee said. “The message is important, no question about it. But there’s a message implicit in showing up, especially in Flint. This is a community that has felt left behind many, many times and overlooked many, many times.”

R&B legend Stevie Wonder was to perform in Detroit after Biden and Obama speak.

Biden’s campaign announced it was sending Obama to Florida and Georgia on Monday. He is the campaign’s most valuable asset to help energize the nonwhite voters Democrats so badly need to defeat Trump. “Joe Biden is my brother. I love Joe Biden, and he will be a great president,” Obama said Saturday.

The press for Michigan’s Black voters comes after voting was down roughly 15% in Flint and Detroit four years ago — a combined 48,000-plus votes in a state Trump carried by about 10,700 votes. Overall, the Black voter turnout rate declined for the first time in 20 years in a presidential election, falling to 59.6% in 2016 after reaching a record-high 66.6% four years earlier, according to the Pew Research Center.

Trump isn’t ceding Michigan to Biden. He visited Waterford Township, near Detroit, on Friday and held a rally in the state capital, Lansing, this past week, though the surging coronavirus cases are clouding his presidency. 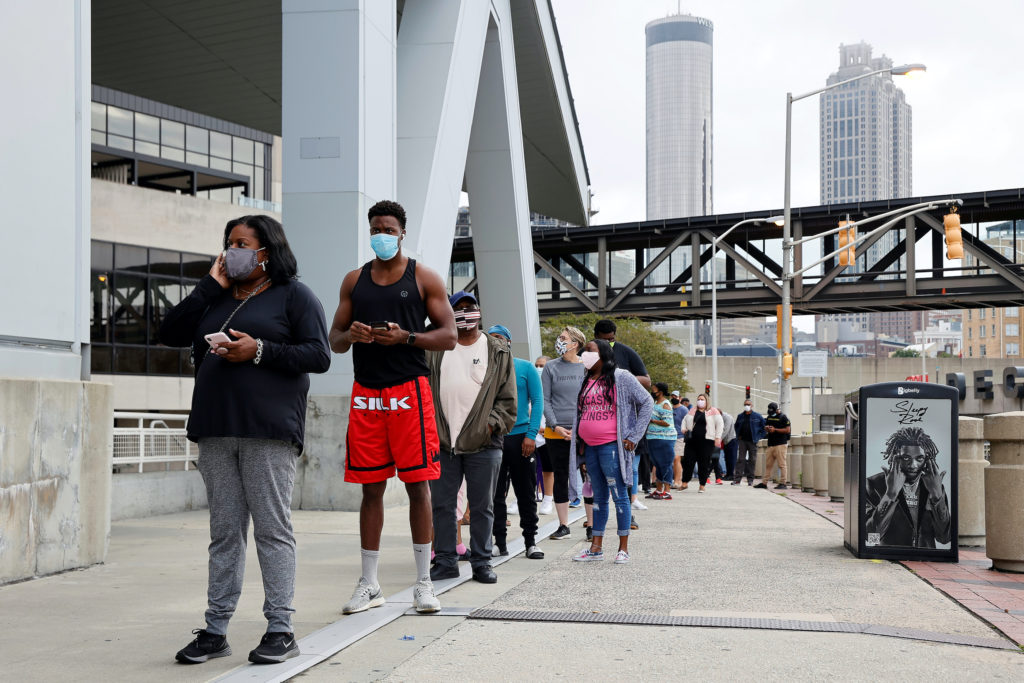 People line up to cast their ballots during early voting for the presidential election outside of the State Farm Arena in Atlanta on October 12, 2020. Photo by Chris Aluka Berry/Reuters.

The worst week of the year, in terms of new infections, arrived with Election Day looming. More than 99,000 Americans reported new infections on Friday, a record high, according to Johns Hopkins University.

Trump told Pennsylvania voters that his administration has done “an incredible job” dealing with the pandemic. He promised that the mass distribution of a vaccine was “just weeks away.” He’s been saying that since August,

Biden has focused almost exclusively on Trump’s inability to control the pandemic. “We’re gonna beat this virus and get it under control and the first step to doing that is beating Donald Trump,” Biden said after Obama spoke in Flint.

With the campaign down to the final days, Trump’s closing sprint includes, in addition to the four stops in Pennsylvania, nearly a dozen events in the final 48 hours across states he carried in 2016.

Biden will close out his campaign on Monday in Pennsylvania, the state where he was born and the one he’s visited more than any other. The Biden team announced that the candidate, his wife, Jill, running mate Kamala Harris, and her husband, Doug Emhoff, plan to “fan out across all four corners of the state.” 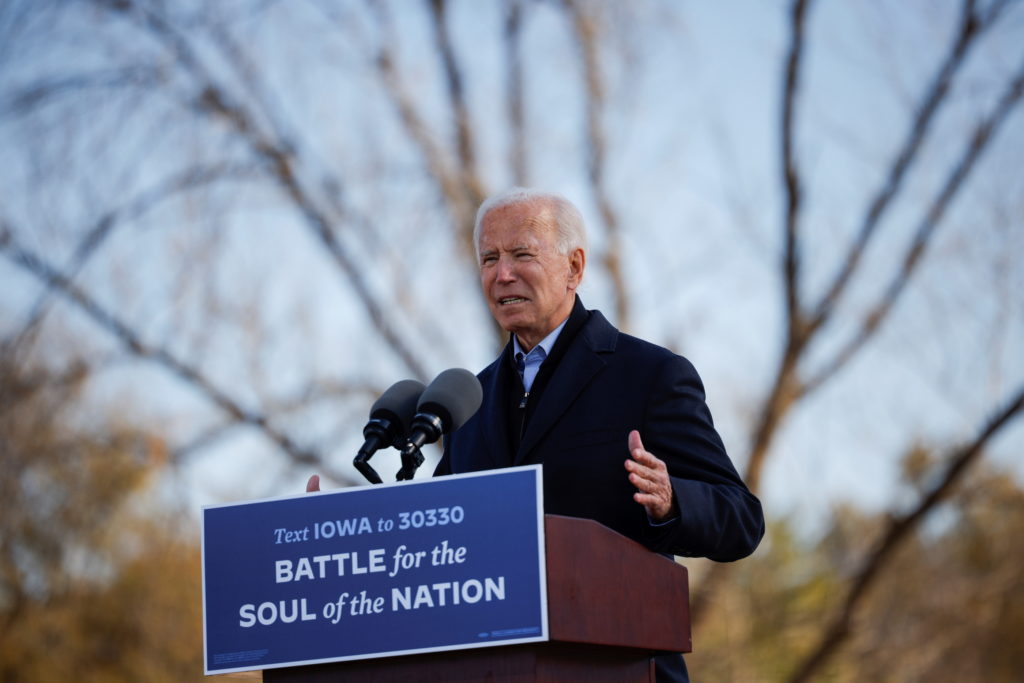 If Saturday was any indication, the final 72 hours of the 2020 campaign will get nasty.

Speaking in Flint, Michigan, Biden joked of Trump, “When you were in high school, wouldn’t you have liked to take a shot?”

The Democrat then mocked the president as a “macho man” and called him “weak.”

Biden’s reference to “taking a shot” at Trump was reminiscent of remarks Biden made at least twice before indicating he’d fight the president if both were younger. Trump, too, on Saturday suggested he could beat up Biden if given the chance and suggested the former vice president wears sunglasses to cover up “surgery on the eyes.”

“Remember when he said he’d like to take me to the back of the barn?” Trump asked.

He then waved his hand, suggesting he could easily topple Biden.

“He’s not a big guy,” Trump said of his Democratic opponent. “A slight slap, you wouldn’t have to close your fist.”