WASHINGTON — The Navy has been notified that the White House will not intervene to stop a disciplinary proceeding that could cost a SEAL his position in the elite unit, a senior Navy official said Sunday.

Although President Donald Trump had tweeted on Thursday that he would not let the Navy remove Chief Petty Officer Edward Gallagher from the SEALs, the Navy was given White House guidance on Friday that it can proceed as planned, the Navy official said. The official spoke on condition of anonymity to discuss internal matters.

This would seem to have defused a conflict between the president and Navy leaders, although it remained possible that Trump could still use his authority as commander in chief to intervene in the volatile and politically charged Gallagher case, despite assurances received by the Navy.

Navy Secretary Richard Spencer said Saturday at an international security forum in Halifax, Nova Scotia, that he did not consider a tweet by Trump an order and would need a formal order to stop the Navy review board, scheduled to begin Dec. 2, that would determine whether Gallagher is allowed to remain in the SEALs. 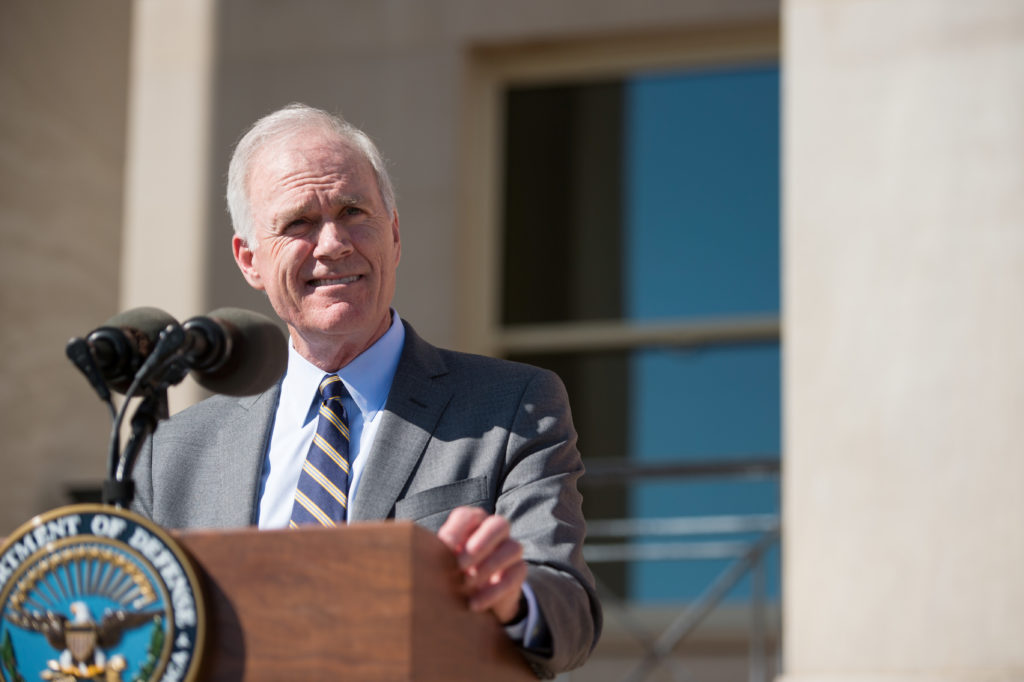 Secretary of the Navy Richard V. Spencer speaks after being formally sworn into office by Defense Secretary Jim Mattis at the Pentagon in Washington, D.C., U.S. in this September 7, 2017 handout photo. Photo by Army Sgt. Amber I. Smith/DOD/Handout via Reuters.

Trump tweeted Thursday that the Navy “will NOT be taking away Warfighter and Navy SEAL Eddie Gallagher’s Trident Pin,” inserting himself into the ongoing legal review of the sailor’s ability to hold onto the pin that designates him a SEAL.

The Navy on Wednesday had notified Gallagher that he will face the review board to determine if he should remain on the elite force.

Gallagher was acquitted of a murder charge in the stabbing death of an Islamic State militant captive, but a military jury convicted him of posing with the corpse while in Iraq in 2017. He was demoted from chief petty officer to a 1st class petty officer. Trump this month restored Gallagher’s rank.

Spencer, speaking on the sidelines of the Halifax International Security Forum, said if the president requests the process to stop, the process stops.

“Good order and discipline is also obeying the orders of the president of the United States,” he said.

Despite the differing views with the president over the appropriate handling of the case, Spencer told reporters that he has not threatened to resign. But he acknowledged that he serves at the pleasure of the president.

“The president of the United States is the commander in chief. He’s involved in every aspect of government and he can make decisions and give orders as appropriate,” he said.

Gallagher’s lawyers have accused the Navy of trying to remove the SEAL designation in retaliation for Trump’s decision to restore his rank.

Speaking Sunday on “Fox & Friends,” Gallagher repeated his argument that the Navy was acting in retaliation. “They could have taken my Trident at any time they wanted,” he said. “Now they’re trying to take it after the president restored my rank.” Gallagher said he wanted to be allowed to retire on Nov. 30 “with all the honors that I’ve earned, get back to my family.”

Green also notified three SEAL officers who oversaw Gallagher during the deployment — Lt. Cmdr. Robert Breisch, Lt. Jacob Portier and Lt. Thomas MacNeil — that they are also being reviewed, according to U.S. officials.

Removing their Trident pins means they will no longer be SEALs but could remain in the Navy.

Left: U.S. Navy SEAL Special Operations Chief Edward Gallagher (R), with wife Andrea Gallagher, leaves court after being acquitted of most of the serious charges against him during his court-martial trial at Naval Base San Diego in San Diego, California , U.S., July 2, 2019. Photo by John Gastaldo/Reuters.