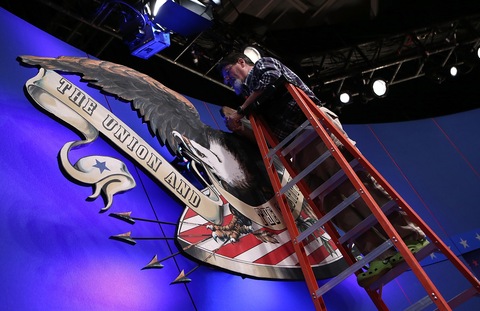 Tune in to the campaign Tuesday, and you might just think you’ve been transported by time portal to 1992.

Yes, that’s former President Bill Clinton arguing to the camera about taxes. And Ross Perot is there, too.

The homage to yesteryear comes as President Obama and Mitt Romney prepare to meet once more for a high-stakes debate, this one a town hall where voters will ask most of the questions and with exactly three weeks until the nation decides which one of them will take the oath of office in January.

Clinton stars in a new web video for the president. He deconstructs Romney’s tax plan point-by-point, suggesting that the Republican only wants to help the wealthy and that his policy proposals are unrealistic at best.

Watch the video here or below.

Meantime, Romney announced Tuesday morning that he’s earned ’92 presidential spoiler and third-party candidate Perot’s endorsement. The businessman from Texas argued it is “time for Mitt Romney” in an op-ed in the Des Moines Register in battleground Iowa, where Perot captured more than 18 percent of the vote in 1992. (That’s actually a lower percentage than he earned in several other key states.)

“We can’t afford four more years in which debt mushrooms out of control, our government grows and our military is weakened,” Perot wrote. “For the past four years, we have squandered one opportunity after the next to turn things around. The longer we delay acting, the steeper the price we will have to pay.”

He also complained about cuts to the defense budget, with no mention that his own company (Perot Systems, which is now tied to Dell) benefited from millions in government defense contracts.

Even as we have engaged in runaway domestic spending, the country has been put on the path to massive cuts in the defense budget. President Obama’s own Secretary of Defense has called the proposed cuts “devastating” to our nation’s security. History teaches that the price of military weakness always exceeds the price of preparedness. And yet at a moment when turbulence is sweeping critical regions of the world, we are increasingly unprepared. That is wrong. It’s not the way America ought to be.

The debate comes as even more polling confirms what we’ve been writing here since the candidates last met on a stage: This thing is a jump ball.

A new USA Today/Gallup swing states poll found Romney closing the gap among women who are likely voters, a crucial demographic who had favored Mr. Obama strongly for much of the campaign. The poll placed Romney within one point of Mr. Obama among the women in 12 battleground states and up with 50 percent to the president’s 46 percent among likely voters.

A pollster for Team Obama, Joel Benenson, took issue with the Gallup numbers in a memo Monday. He called them “flawed” and “an extreme outlier” for the survey of women, in particular. He noted that the survey’s likely voter screen, which is a series of questions asked during polling to form the likely voter group numbers, may have a bias against young voters, people living in cities and minorities.

You can read about Gallup’s methods here.

We also got new information Monday about Team Romney’s finances. The Republican nominee raised $170 million in September and, combined with the Republican National Committee, had $191 million in the bank at the end of last month.

The effort will mark an unprecedented experiment in last-minute high-dollar fund-raising by a presidential campaign, one made necessary by Mr. Romney’s decision to forgo public financing without the cash cushion provided Mr. Obama by his millions of small donors.

Those donors have flooded Mr. Obama’s campaign with a steady stream of donations with little investment of the president’s time and energy, allowing him to focus more heavily on retail campaigning in recent months. While Mr. Romney’s fund-raising has kept roughly on pace with Mr. Obama’s since the beginning of the summer, his dollar totals lean more heavily on large checks to the Republican National Committee, which must pay higher rates for political advertising and is allowed to spend only a limited amount on ads coordinated with Mr. Romney’s campaign.

To that end, the president’s re-election team announced Monday via Twitter that 4 million people had given to his campaign. They also made a video highlighting those donors.

Team Romney said in a release that 93 percent of its September donations were for $250 or less, with more than 1 million coming in that month alone from all 50 states and Washington, D.C.

So, what can viewers expect from the big faceoff Tuesday night? It officially starts at 9 p.m. ET, and you should, of course, watch it on PBS.

But the NewsHour will get started around 4:30 p.m. ET with a livestream and live-blog featuring rich analysis and starring our political team and special guests, including former George W. Bush speechwriter Michael Gerson. We’ll also talk with voters during a 7:30 p.m. ET Google Plus hangout. Tune in here.

Christina hosted a Twitter chat Monday diving into what the candidates need to tackle Tuesday night.

Obama campaign spokeswoman Jen Psaki told reporters following the president Monday that her boss has enjoyed the “beautiful atmosphere” in Williamsburg, Va., during his debate prep.

“He’s calm and energized and just looking forward to getting to New York,” she said. Psaki also said the president is “energized” and “calm” and plans to be both firm and “making a passionate case” at the town hall.

The format of the event will allow Mr. Obama and Romney to roam the stage as they answer questions or sit on a tall chair with a back. Romney will take the first question, and organizers are hoping at least a dozen will be asked.

The Denver Post offers advice for the questioners about how to break through. (Hint: Don’t ask about pizza.)

Is there a Senate contest with bigger national implications than GOP Sen. Scott Brown’s re-election matchup with Democrat Elizabeth Warren? This larger-than-life campaign has compelling characters, millions of dollars as the most expensive in the country and major consequences for control of the upper chamber.

Gwen Ifill, Morning Line co-pilot Terence Burlij and politics production assistant Allie Morris traveled to the Bay State to get a sense of the dynamics on the ground and found the key to victory is that elusive voter not affiliated with either party.

Watch Gwen’s report here or below:

Allie also put together this behind-the-scenes slide show of their reporting.

They agreed that several factors suggest that a GOP Senate takeover is highly unlikely.

“It’s now a stretch for Republicans to take control of the Senate,” Page said.

They ticked through the Senate battles in Arizona, Connecticut, Missouri, Wisconsin and Virginia and outlined what they will be watching for on Election Night. (In fact, we’ll all be watching together as Stu and Christina analyze the down-ticket races during the PBS Election Special.)

Also on Monday’s NewsHour, Ray Suarez talked with NPR’s Peter Overby about his reports on “Morning Edition” and “All Things Considered” exploring super PAC spending. They went through the difference between the Crossroads groups and the Koch Brothers, and looked at the unprecedented volume of outside spending boosting the GOP while the Obama campaign is shouldering most of its own messaging.

The discussion was part of our election-year partnership with NPR and Kantar Media/CMAG to look at television advertising spending.

Online politics production assistant Meena Ganesan pulled together some of the most interesting numbers in this post.

Tuesday’s tidbit from NewsHour partner Face the Facts USA comes via a slide show that looks at post-war costs as the United States helps to rebuild Iraq and Afghanistan.

The nonpartisan organization found that the United States “has invested more reconstructing Iraq and Afghanistan than it did rebuilding Germany after World War II. $60.45 billion has been spent in Iraq, more than $100 billion in Afghanistan. For comparison, the U.S. spent less than $35 billion in today’s dollars in Germany from 1946 through 1952.”

Just interviewed Ann Romney. She is really tall. Oh, and she says she’s here cause Pennsylvania is in play.

4,000,000 people have donated to this campaign: that means about 1 in 75 Americans own a piece of it. (Thank you!) twitter.com/BarackObama/st…

Haven’t seen a single Casey or Obama sign outside of Pittsburgh in last 48 hours. Drove 175 miles yesterday in SWPA.

Seriously though, please say the Long Island medium will be able to ask a question tonight?