On North Korea, Trump seems to undermine a senior adviser

TOKYO — Seemingly contradicting his national security adviser, President Donald Trump on Sunday played down North Korea’s recent missile tests and said they were not a concern for him.

The comments tweeted during his trip to Japan were sure to unnerve leaders of the U.S. ally that is directly threatened by short-range weapons from its Asian neighbor. While America is not, there are tens of thousands of U.S. troops in Japan and South Korea.

Trump also said North Korea’s Kim Jong Un’s criticism of Joe Biden, the former vice president who is among the Democrats running for the White House in 2020, made him smile.

The remarks were the latest example of Trump’s willingness to publicly undermine his senior advisers, flout democratic norms and side with totalitarian leaders.

“North Korea fired off some small weapons, which disturbed some of my people, and others, but not me,” Trump tweeted in one of his early morning messages.

North Korea fired off some small weapons, which disturbed some of my people, and others, but not me. I have confidence that Chairman Kim will keep his promise to me, & also smiled when he called Swampman Joe Biden a low IQ individual, & worse. Perhaps that’s sending me a signal?

“Some” of his “people” appear to include national security adviser John Bolton, who told reporters at a briefing Saturday before Trump arrived in Tokyo that a series of short-range missile tests by North Korea this month violated U.N. Security Council resolutions.

“There is no doubt about that,” said Bolton, citing the May 4 and May 9 tests that ended a pause in launches that began in late 2017. Trump ignored a shouted question Sunday about whether he agreed with Bolton’s assessment and his press secretary did not seem to back up Bolton.

Spokeswoman Sarah Sanders, said in an interview with NBC’s “Meet the Press” that “we know that the activities at no point that took place over the last several weeks have been a threat to the United States or our allies.” She said Trump “still feels comfortable and confident in the relationship that he has with Chairman Kim.”

Trump and other administration officials have tried to play down the significance of the tests, insisting they do not violate an agreement Trump reached with Kim for a moratorium on launches.

“The moratorium was focused, very focused, on intercontinental missile systems, the ones that threaten the United States,” U.S. Secretary of State Mike Pompeo said in a recent television interview. That raised alarm bells in Japan, where short-range missiles pose a serious threat because of the country’s proximity to North Korea.

Also within range of such missiles are the roughly 28,000 U.S. troops stationed in South Korea and the 54,000 American forces in Japan, in addition to family members and civilian Department of Defense employees.

“I find them very disturbing and certainly wouldn’t trust Kim Jong-un,” said U.S. Sen. Joni Ernst, R-Iowa. She told CNN’s “State of the Union” that “Japan does have reason to be concerned. And I am concerned as well. We need to see North Korea back off of those activities. And we need to take a very strong stance on that.” 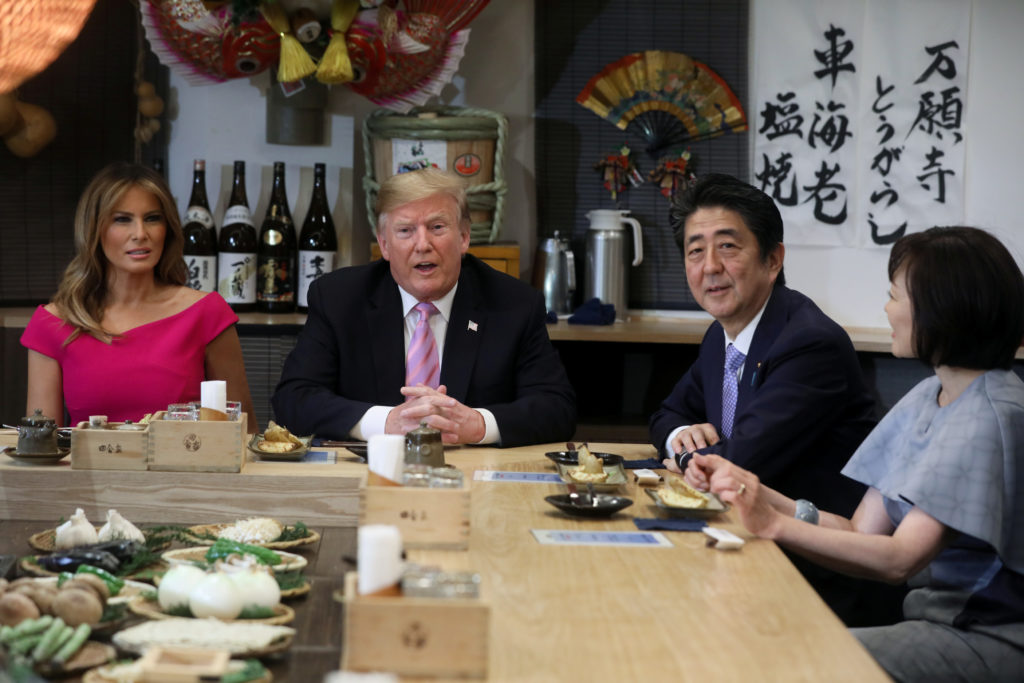 Ernst said the U.S. needs to ensure that North Korea follows U.N. guidelines. “We can’t continue to let them further develop any type of weapon systems.”

Unlike several other leaders in the region, Abe has yet to meet with Kim, leaving Japan to rely on the U.S. as an intermediary and advocate with North Korea. Abe recently offered to meet Kim without preconditions in an effort to restore diplomatic ties.

Trump in his tweet said he had “confidence that Chairman Kim will keep his promise to me,” while at the same time embracing Kim’s recent attacks on Biden, whose name he misspelled.

North Korea this week past called Biden a “fool of low IQ” and an “imbecile bereft of elementary quality as a human being” after Biden accused Trump of cozying up to “dictators and tyrants” such as Kim and Russian President Vladimir Putin during his campaign launch speech.

Biden’s campaign would not comment on the record Sunday, but a spokesman for his campaign, Andrew Bates said this past Wednesday that given Biden’s “record of standing up for American values and interests, it’s no surprise that North Korea would prefer that Donald Trump remain in the White House.”