On Twitter, Trump declares that the North Korea nuclear threat is over

WASHINGTON — President Donald Trump declared on Twitter Wednesday that there was “no longer a Nuclear Threat from North Korea,” a bold and questionable claim following his summit with leader Kim Jong Un that produced few guarantees on how and when Pyongyang would disarm.

“Just landed – a long trip, but everybody can now feel much safer than the day I took office,” he tweeted. “There is no longer a Nuclear Threat from North Korea. Meeting with Kim Jong Un was an interesting and very positive experience. North Korea has great potential for the future!”

Trump and Kim were returning to their respective strongholds following the talks — but to far different receptions.

In Pyongyang, North Korean state media heralded claims of a victorious meeting with the U.S. president; photos of him standing side-by-side with Trump on the world stage were splashed across newspapers. Trump, meanwhile, faced questions about whether he gave away too much in return for far too little when he bestowed a new legitimacy on Kim’s rule and agreed, at Pyongyang’s request, to end war games with Seoul that the allies had long portrayed as crucial to Asian safety.

There were worries, especially in Tokyo and Seoul, which have huge U.S. military presences, about Trump agreeing to halt U.S. military exercises with South Korea, which the North has long claimed were invasion preparations. That concession to Kim appeared to catch the Pentagon and officials in Seoul off guard, and some South Koreans were alarmed.

“The United States is our ally, so the joint military drills are still necessary to maintain our relationship with the U.S.,” said Lee Jae Sung, from Incheon. “I think they will be continued for a while.”

U.S. Secretary of State Mike Pompeo arrived at Osan Air Base south of Seoul from Singapore early Wednesday evening. He met for nearly an hour with Gen. Vincent Brooks, commander of U.S. Forces Korea, at the air base before heading by motorcade to Seoul.

Pompeo will meet President Moon Jae-in on Thursday morning to discuss the summit. Japanese Foreign Minister Taro Kono is also heading to Seoul and is due to meet with Pompeo and his South Korean counterpart. Pompeo, the former CIA director, then plans to fly to Beijing to update the Chinese government on the talks.

On the issue the world has been most fixated on — North Korea’s pursuit of a nuclear arsenal meant to target the entire U.S. mainland — Trump and Kim signed a joint statement that contained a repeat of past vows to work toward a denuclearized Korean Peninsula. The details of how and when the North would denuclearize appear yet to be determined, as are the nature of the unspecified “protections” Trump is pledging to Kim and his government. 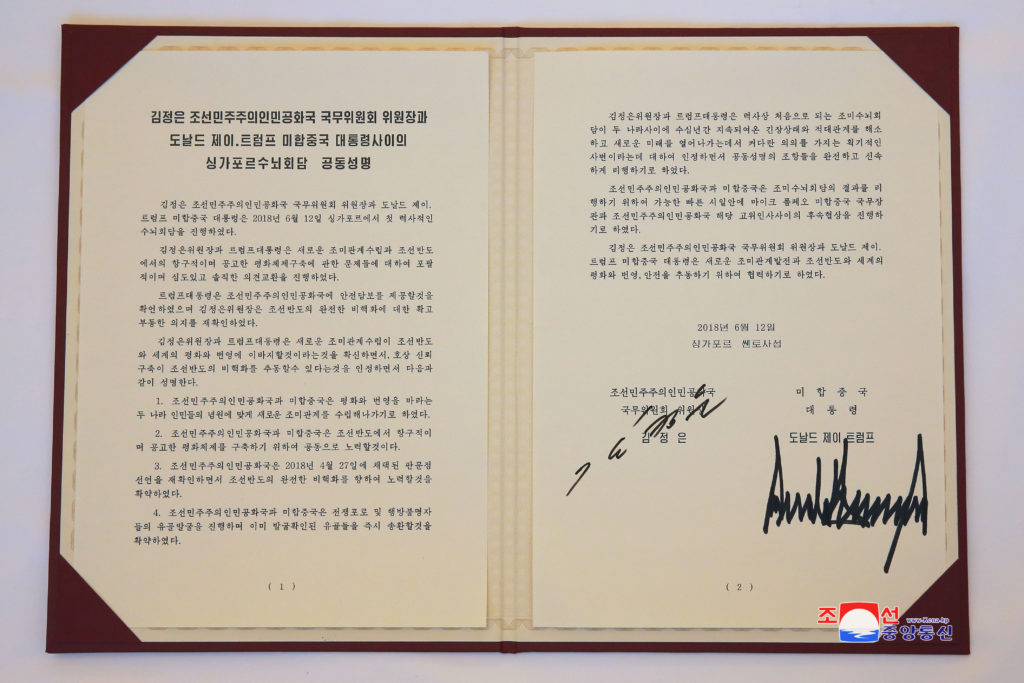 A document signed by President Donald Trump and North Korea’s leader Kim Jong Un is seen in Singapore in this picture released on June 12, 2018 by North Korea’s Korean Central News Agency. Photo by KCNA via Reuters

Read the document signed by Trump and Kim after the summit

Despite the confusion and disappointment among some, the summit managed to, for a time at least, reset a relationship that has long been characterized by bloodshed and threats. In agreeing to the summit, Trump risked granting Kim his long-sought recognition on the world stage in hopes of ending the North’s nuclear program.

“Before taking office people were assuming that we were going to War with North Korea,” Trump tweeted Wednesday. “President (Barack) Obama said that North Korea was our biggest and most dangerous problem. No longer – sleep well tonight!”

Trump’s claim that North Korea no longer poses a nuclear threat is questionable.

North Korea is believed to possess more than 50 nuclear warheads, with its atomic program spread across more than 100 sites constructed over decades to evade international inspections. Trump insisted that strong verification of denuclearization would be included in a final agreement, saying it was a detail his team would begin sorting out with the North Koreans next week.

Moon has championed engagement with the North, and the agreement’s language on North Korea’s nuclear program was similar to what the leaders of North and South Korea came up with at their own summit in April. Trump and Kim referred back to the so-called Panmunjom Declaration, which contained a weak commitment to denuclearization but no specifics on how to achieve it.

As Trump acknowledged that denuclearization would not be accomplished overnight, the North suggested Wednesday that Trump had moved away from his demand for complete denuclearization before U.S. sanctions on the long-isolated country are removed.

The state-run Korean Central News Agency said the two leaders “shared recognition to the effect that it is important to abide by the principle of step-by-step and simultaneous action in achieving peace, stability and denuclearization of the Korean Peninsula.” KCNA also reported that Trump had expressed his intention to lift sanctions “over a period of goodwill dialogue” between the two countries.

The Singapore agreement does not detail plans for North Korea to demolish a missile engine testing site, a concession Trump said he’d won, or Trump’s promise to end military exercises in the South while negotiations between the U.S. and the North continue. Trump cast that decision as a cost-saving measure, but also called the exercises “inappropriate” while talks continue.

Trump declared he and Kim had developed “a very special bond,” and Kim said the leaders had “decided to leave the past behind” and promised, “The world will see a major change.”

The U.S. has stationed combat troops in South Korea since the end of the Korean War in the 1950s and has used them in a variety of drills. The next scheduled major exercise, involving tens of thousands of troops, normally is held in August.

The Pentagon said Tuesday it was consulting with the White House and others, but was silent on whether the August exercise would proceed. Defense Secretary James Mattis’ chief spokeswoman, Dana W. White, told reporters he was “in full alignment” with Trump.

In Japan, the prospect of canceled U.S.-South Korean drills was met with concern.

In South Korea, the liberal Kyunghyang Shinmun newspaper said Trump and Kim have started a “march of peace” to end nearly seven decades of hostility and pave the way for permanent peace and prosperity on the peninsula.

The conservative Chosun Ilbo, the country’s biggest paper, was more critical, denouncing Trump for offering the end of military drills while failing to convince the North to commit to verifiably giving up its nukes for good. It called the summit “dumbfounding and nonsensical,” and said it will allow North Korea to permanently maintain its nuclear weapons program.

Left: President Donald Trump (R) waves as he and North Korea's leader Kim Jong Un look on from a veranda during their historic U.S.-North Korea summit, at the Capella Hotel on Sentosa island in Singapore on June 12, 2018. Photo by Saul Loeb/AFP/Getty Images