WASHINGTON — It was the Trumpiest of offers.

A rally at one of the world’s largest stadiums. A crowd of millions cheering him on. A love fest during an election year.

President Donald Trump’s packed two-day visit to India promises the kind of welcome that has eluded him on many foreign trips, some of which have featured massive protests and icy handshakes from world leaders. He is expected to receive a warm embrace from the ideologically aligned and hug-loving Prime Minister Narendra Modi, complete with a massive rally soon after his arrival Monday and then a sunset visit to the Taj Mahal.

After hosting Modi at a “Howdy Modi” rally in Houston last year that drew 50,000 people, Modi will return the favor with a “Namaste Trump” rally (it translates to, “Greetings, Trump”) at the world’s largest cricket stadium in the western Indian city of Ahmedabad. Tens of thousands are expected to line the streets.

Modi “told me we’ll have 7 million people between the airport and the event,” Trump said to reporters Tuesday, then raised the anticipated number to 10 million when he mentioned the trip during a Thursday night rally. Indian authorities expect closer to 100,000.

“I’ll never be satisfied with a crowd if we have 10 million people in India,” Trump said. And as he left the White House on Sunday for the flight to India, the upcoming spectacle was on the president’s mind again: “I hear it’s going to be a big event. Some people say the biggest event they’ve ever had in India. That’s what the prime minister told me — this will be the biggest event they’ve ever had.”

Trump’s motorcade will travel amid cheers from carefully picked and screened Modi loyalists and workers from his Bharatiya Janata Party. They will stand for hours alongside the neatly manicured 22-kilometer (14-mile) stretch of road to accord Trump a grand welcome. 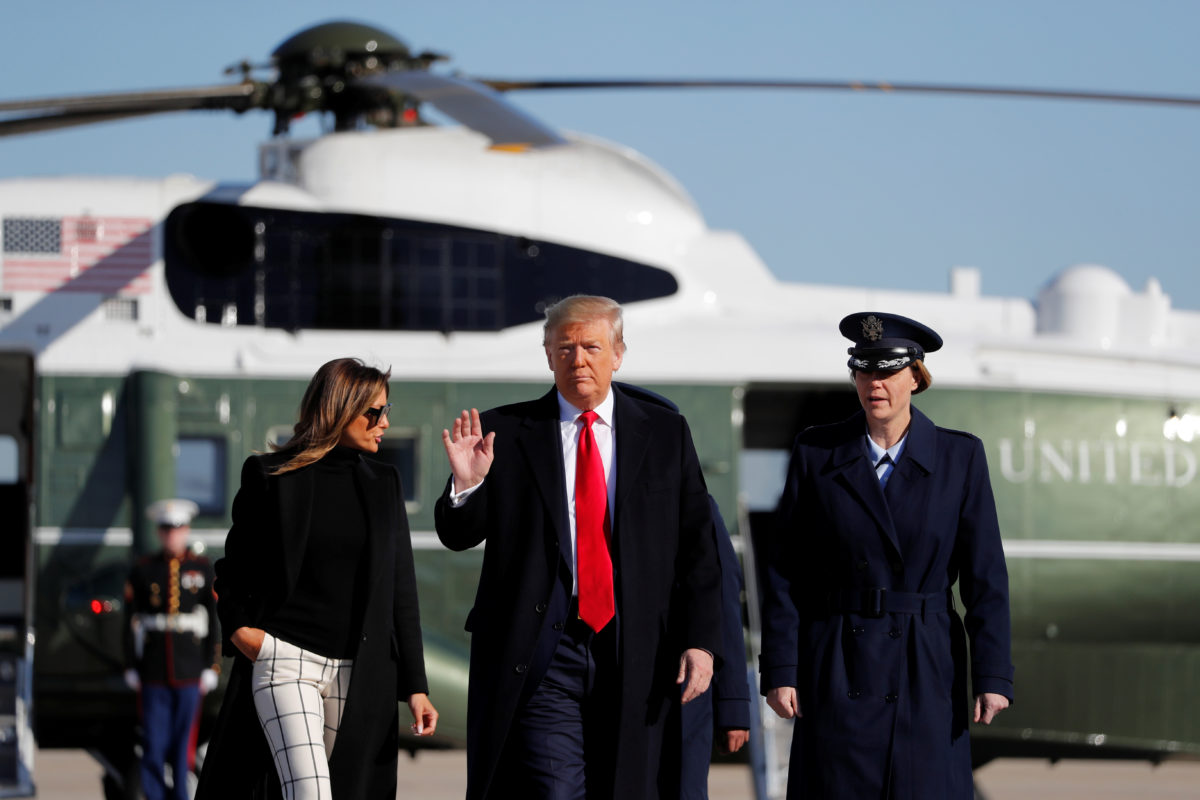 U.S. President Donald Trump and First Lady Melania Trump prepare to board Air Force One as they depart Washington for India from Joint Base Andrews in Maryland, U.S., February 23, 2020. Photo by Alexander Drago/Reuters.

Trump generally dislikes foreign travel and prefers being home in his White House bed; in fact, he noted to reporters upon his departure from the White House that it was a long trip to India and that he was only going to be there one night. But he has a particular affinity for India. He owned a hotel and casino in Atlantic City, New Jersey, named the Trump Taj Mahal, and he owns multiple properties in India.

“There’s a lot of color. This is a loud and boisterous country, and that exactly in some ways really fits with the Trump style,” said Tanvi Madan, a senior fellow and director of The India Project at the Brookings Institution. She said Trump is likely to get a king’s welcome from a country well-rehearsed in the art of adulation. A half-million people gathered to hear President Dwight D. Eisenhower speak in 1959; former President Jimmy Carter had a village named after him — Carterpuri.

“In some ways, American presidents go to India to feel loved,” said Madan. She predicted Trump would receive an even grander welcome because the Indians recognize it’s something Trump expects and that could keep them in his good graces.

“It’s not about him, per se, for them. It is the U.S. relationship for India is crucial,” she said.

India has spent weeks making preparations for the visit. At a cost of almost $14 million, the government is blanketing the city with ads of Trump and Modi and hastily erected a half-kilometer (1,640-foot) brick wall beside the road Trump will take to the stadium, which officials are rushing to finish in time for Trump’s arrival.. Critics say the wall was built to block the view of a slum inhabited by more than 2,000 people. Stray dogs have been caught and exotic trees planted.

Trump’s foreign visits have typically been light on sightseeing, but this time, the president and first lady Melania Trump are to visit the Taj Mahal. Stories in local media warn of the monkeys that inhabit the landmark pestering tourists for food and, on occasion, menacing both visitors and slingshot-carrying security guards. 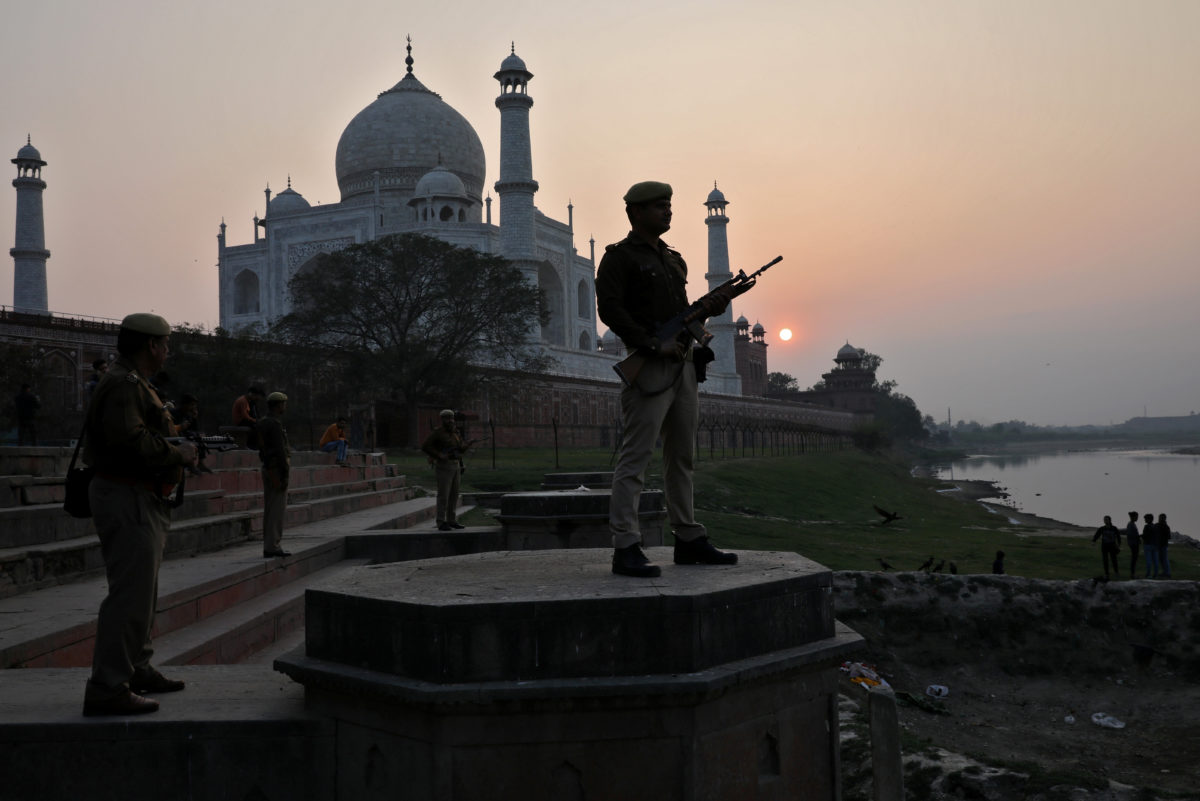 Presidents have often used trips overseas to bolster their electoral prospects. Images of American presidents being feted on the world stage stand in contrast to those of their rivals in the opposing party slogging through diners in early-voting states and clashing in debate.

This trip, in particular, reflects a Trump campaign strategy to showcase him looking presidential during short, carefully managed trips that provide counterprogramming to the Democrats’ primary contest and produce the kinds of visuals his campaign can use in future ads. His aides also believe the visit could help the president woo tens of thousands of Indian-American voters before the November election.

Some of Trump’s past trips have been overshadowed by diplomatic snafus and political gaffes. When Barack Obama was running for president, his reception in Germany in front of a massive crowd was featured prominently in an attack ad casting him as a mere “celebrity.”

Beyond the optics, there are serious issues to address as India faces a slumping economy and ongoing protests over a citizenship law that excludes Muslims.

Trade tensions between the two countries have escalated since the Trump administration imposed tariffs on steel and aluminium from India. India responded with higher penalties on agricultural goods and restrictions on U.S. medical devices. The U.S. retaliated by removing India from a decades-old preferential trade program.

Though trade will be on the agenda, Trump and administration officials are playing down expectations.

“Well, we can have a trade deal with India, but I’m really saving the big deal for later on,” the president said.

India has been embroiled in protests over its Citizenship Amendment Act. It provides a fast track to naturalization for some migrants who entered the country illegally while fleeing religious persecution, but excludes Muslims, raising fears that the country is moving toward a religious citizenship test. Passage has prompted large-scale protests and a violent crackdown.

Typically, Trump has not publicly rebuked world leaders for human rights abuses during his overseas trips. But one senior administration official said the U.S. is concerned about the situation and that Trump will tell Modi the world is looking to India to continue to uphold its democratic traditions and respect religious minorities.

But there is likely to be little public divide between Trump and Modi, two leaders with a similar love of bravado and adoration. At the “Howdy Modi” event last fall, which incongruously linked the Indian prime minister with Texas’ cowboy culture, the two world leaders took the stage hand in hand at a rock concert-like setting that will be dwarfed by the scene in Ahmedabad

“Get ready to say #NamasteTrump,” tweeted the city, the largest in Modi’s home state of Gujarat, as it geared up to welcome the American president on his maiden India visit as president. It also invited people to join “#theBiggestRoadShowEver.”

Left: A man rides his cycle past a hoarding with the images of India's Prime Minister Narendra Modi, U.S. President Donald Trump and first lady Melania Trump ahead of Trump's visit, in Ahmedabad, India, February 22, 2020. Photo by Adnan Abidi/Reuters.