Pawlenty Takes His First Step Toward the 2012 Republican Nomination 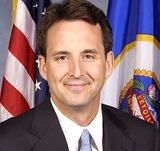 Former Minnesota Gov. Tim Pawlenty said Monday he has formed a presidential exploratory committee, making him the first major Republican candidate to take an official step toward running for the GOP nomination in 2012.

Pawlenty broke the news to supporters on his Facebook page.

“Join the team and together we’ll restore America,” Pawlenty declares in the video, which runs nearly two minutes in length.

Much of the clip focuses on the 50-year-old Pawlenty’s blue-collar Minnesota upbringing and attempts to connect the struggles he faced growing up to those now confronting many in the U.S.

“At a young age I saw up close the face of challenge, the face of hardship and the face of job loss,” Pawlenty says. “Over the last year I’ve traveled to nearly every state in the country and I know many Americans are feeling that way today. I know that feeling. I lived it.”

The rollout video will be followed by Pawlenty hosting a telephone town hall at 7:30 p.m. ET with supporters who sign up on his new campaign website.

Monday’s announcement paves the way for an all-but-certain presidential bid. Pawlenty can start raising money and hiring campaign staff. He will also be required to file paperwork with the Federal Election Commission.

Since leaving the governor’s office in January after two terms, Pawlenty has been a frequent visitor of Iowa and New Hampshire, critical early nominating states. The Minnesotan also launched a whirlwind media tour in January tied to the release of his recently published memoir, “Courage to Stand,” a traditional move for presidential upstarts.

Pawlenty’s early start and repeated efforts to highlight his biography are signs of his most glaring weakness as a candidate: his lack of name recognition. The latest Washington Post-ABC News poll showed that nearly 60 percent of Republicans and GOP-leaning independents responded “don’t know” when asked for their opinion of Pawlenty.

Of those familiar with Pawlenty, 28 percent had a favorable view of him, compared to 15 percent who viewed him unfavorably.

Pawlenty’s path to the GOP nomination runs through Minnesota’s neighbor to the south, Iowa. A strong showing there could prove to Republican voters that Pawlenty belongs in the top-tier of candidates. But, if Pawlenty cannot gain traction in the first-in-the-nation Hawkeye State, his candidacy would likely face enormous difficulty moving forward from there.

Pawlenty joins former Godfather’s Pizza CEO Herman Cain and former Louisiana governor Buddy Roemer as the three Republicans who have formed an exploratory committee. Former House Speaker Newt Gingrich is “testing the waters,” which means he can raise money for travel, but does not have to file financial reports with the FEC unless he officially decides to enter the race.

Mississippi Gov. Haley Barbour and U.S. Ambassador to China Jon Huntsman are expected to make their intentions known in the next two months.

The best-known contenders, such as former Massachusetts Gov. Mitt Romney, former Arkansas Gov. Mike Huckabee and former Alaska Gov. Sarah Palin, have the luxury of being able to get a later start and still raise the funds necessary for a serious bid.

Romney has offered signs he is likely to run while Huckabee and Palin have yet to give an indication they are leaning one way or another.