In a move that infuriated Trump and left his own political future far less certain, Pence on Wednesday acknowledged that he did not have the power to unilaterally throw out electoral college votes as Trump and some of his attorneys had wrongly insisted.

Pence, as the session came to an end, said the count “shall be deemed a sufficient declaration” of Biden’s victory, but offered no words of congratulations to the incoming administration. It capped an extraordinary day of chaos, violence and division after a pro-Trump mob stormed the Capitol, sending lawmakers into hiding and delaying the proceeding.

Under normal circumstances, the vote-tallying procedure would be a mere formality — the final step in the complicated technical process of electing a new administration. But after losing court case after court case and with no further options at hand, Trump and his allies had zeroed in on January 6 as their last ditch chance to try to influence the outcome.

They spent days in a futile bid trying to convince Pence that the vice president had the power to reject electors from battleground states that voted for Biden, even though the Constitution makes clear the vice president’s role in the joint session is largely ceremonial, much like a master of ceremonies.

Pence acknowledged that reality in a lengthy statement Wednesday laying out his conclusion that a vice president cannot claim “unilateral authority” to reject states’ electoral votes. 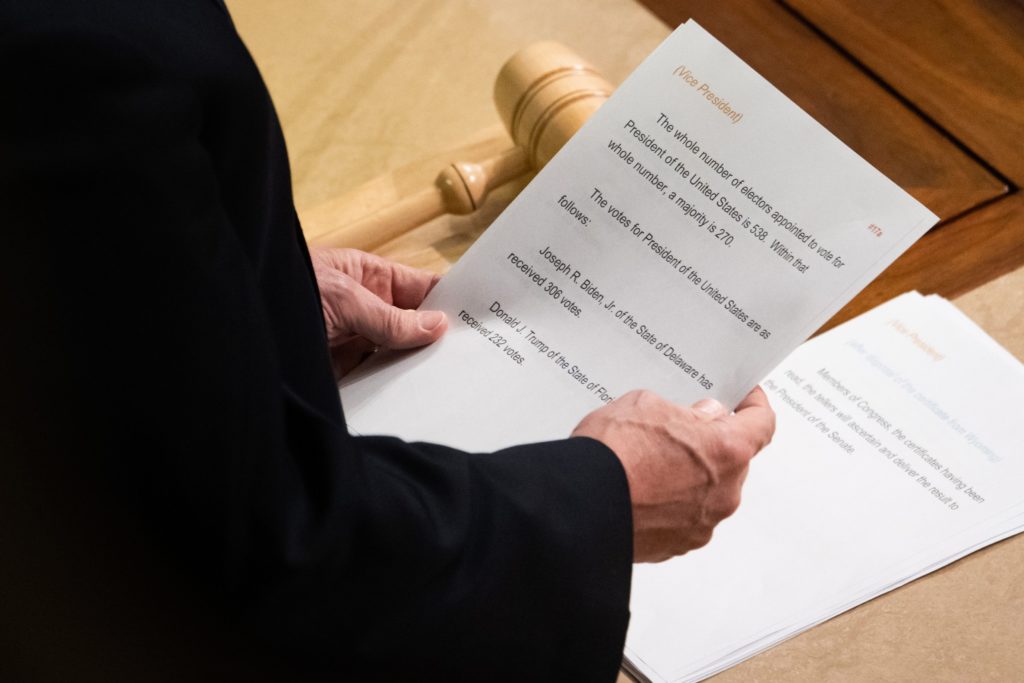 US Vice President Mike Pence reads a sheet of paper with the final electoral vote counts declaring Joe Biden as the next US President during a joint session of Congress to count the electoral votes for President. Photo by Saul Loeb/AFP

“It is my considered judgment that my oath to support and defend the Constitution constrains me from claiming unilateral authority to determine which electoral votes should be counted and which should not,” Pence wrote in a letter to members of Congress that was released shortly before he gaveled in the joint session of Congress. Not long after, the angry mob swarmed the Capitol, overwhelmed police and halted the proceeding that had been underway.

Pence’s move was an expected outcome, but one that carved a dramatic fissure between Trump and Pence, his once most loyal lieutenant. In a dramatic split screen, Pence released the statement just after he arrived at the Capitol to tally the votes and as the president was telling thousands of supporters gathered near the White House that Pence could overturn them if he wanted.

“If Mike Pence does the right thing we win the election,” Trump wrongly told supporters, who later marched through Washington and stormed the Capitol. He repeatedly returned to Pence throughout his speech, voicing frustration as he tried to pressure the vice president to fall in line.

“Mike Pence is going to have to come through for us. And if he doesn’t, its a sad day for our country,” he said.
Trump, who has spent the last two months refusing to acknowledge his defeat, later tweeted his disapproval.
“Mike Pence didn’t have the courage to do what should have been done to protect our Country and our Constitution, giving States a chance to certify a corrected set of facts, not the fraudulent or inaccurate ones which they were asked to previously certify,” he wrote. “USA demands the truth!”

Pence, too, was fuming.

“He said, ‘After all the things I’ve done for (Trump),’” Inhofe added.

Despite claims by Trump and his allies, there was not widespread fraud in the election. This has been confirmed by a range of election officials and by William Barr, who stepped down as Trump’s attorney general last month. Neither Trump nor any of the lawmakers who objected to the count have presented credible evidence that would change the outcome.

While Pence’s allies had made clear that he intended to defy Trump and hew to the Constitution, the vice president’s move was nonetheless a significant departure for a man who has spent the last four years defending the president at every turn and carefully avoiding his ire.

Pence is eying his own run for president is 2024, and the episode could damage his prospects, especially if Trump — or supporters who were wrongly convinced Pence had the power to change the outcome — maintain a grudge. Even out of office, Trump is expected to remain the de facto leader of the Republican Party and a political kingmaker for years to come.

Trump spent much of Wednesday consumed with anger over Pence’s action, even as violent protesters swarmed the U.S. Capitol, forcing lawmakers into hiding and grinding the proceedings to a halt, according to a White House official who spoke only on condition of anonymity to discuss internal matters.

Pence was ushered out of the Senate chamber to a secure location as protesters breached the building. Pence never left the Capitol, according to his chief spokesman, and was in “regular contact” with House and Senate leadership, Capitol Police, and the departments of defense and justice throughout the ordeal.

“The violence and destruction taking place at the US Capitol Must Stop and it Must Stop Now,” Pence later tweeted. “Anyone involved must respect Law Enforcement officers and immediately leave the building.”

After hours of roll calls and debate, he announced the contests’ winners — Biden and Vice President-elect Kamala Harris — formalizing his and Trump’s defeat.

Left: Vice President Mike Pence presides over a Joint session of Congress to certify the 2020 Electoral College results after supporters of President Donald Trump stormed the Capitol earlier in the day on Capitol Hill in Washington, DC. Photo by Erin Schaff/POOL/AFP via Getty Images)