ERBIL, Iraq — Vice President Mike Pence made an unannounced visit to Iraq on Saturday in the highest-level American trip since President Donald Trump ordered a pullback of U.S. forces in Syria two months ago.

Flying in a C-17 military cargo jet to preserve the secrecy of the visit to the conflict zone, Pence landed in Erbil to meet with Iraqi Kurdistan President Nechirvan Barzani. The visit was meant to reassure the U.S. allies in the fight against the Islamic State after Syrian Kurds suffered under a bloody Turkish assault last month following the Trump-ordered withdrawal.

Earlier Pence received a classified briefing at Iraq’s Al-Asad Air Base, from which U.S. forces launched the operation in Syria last month that resulted in the death of IS leader Abu Bakr al-Baghdadi, and spoke by phone with Iraqi Prime Minister Adil Abdul-Mahdi.

It was Pence’s second trip to the region in five weeks after Trump deployed him on whirling trip to Ankara, Turkey, last month to negotiate a cease-fire after President Recep Tayyip Erdogan seized on the U.S. withdrawal to launch an assault on Kurdish fighters in northern Syria. Trump’s move had sparked some of the most unified criticism of his administration to date, as lawmakers in both parties accused Trump of forsaking longtime Kurdish allies and inviting Russia and Iran to hold even greater sway in the volatile region.

Pence said he welcomes “the opportunity on behalf of President Donald Trump to reiterate the strong bonds forged in the fires of war between the people of the United States and the Kurdish people across this region.” 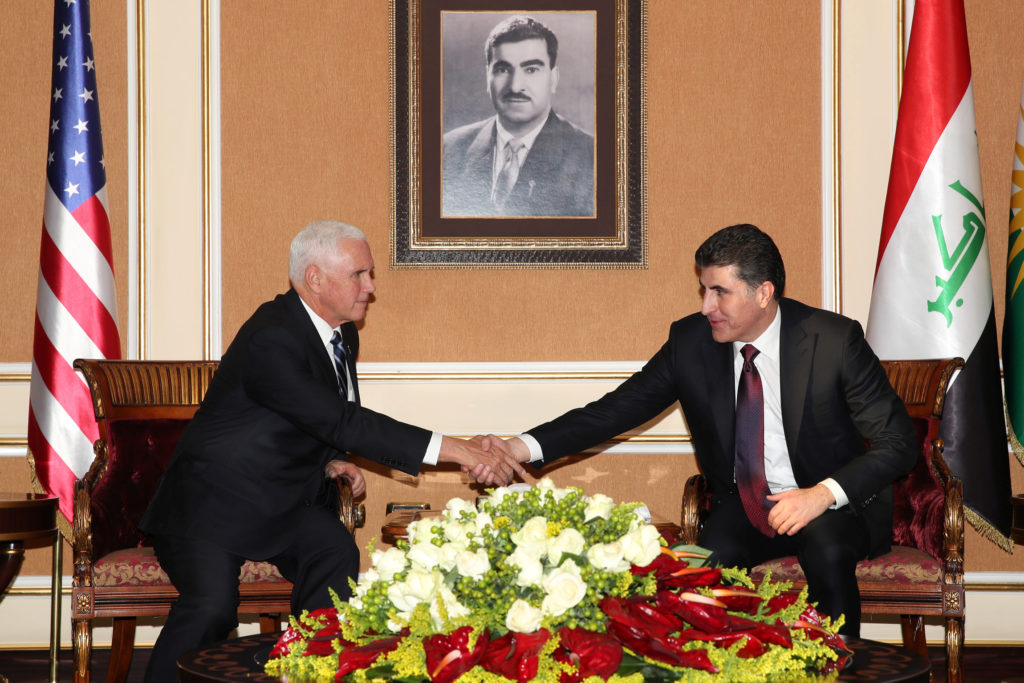 U.S. Vice President Mike Pence and his delegation meet with President of the Kurdistan region in Iraq Nechirvan Barzani in the VIP terminal at Erbil International Airport in Erbil, Iraq November 23, 2019. Photo by Jonathan Ernst/Reuters.

A senior U.S. official said Pence’s visit was meant both to reassure Iraqi Kurds who remain allied with the U.S. in the fight against IS, as well as Americans who have long supported the Kurdish cause, that the Trump administration remained committed to the alliance. The visit was also designed to show Pence’s focus on foreign policy as Washington is gripped by the drama of impeachment.

When the U.S. forces withdrew, Syria’s Kurds — seeking protection from their No. 1 enemy Turkey — invited Syrian government and Russian forces into parts of northeastern Syria where they had not set foot in years. More are now deploying along large parts of the border region under a Russian-Turkish deal, including to at least one former U.S. garrison in northern Syria.

The Ankara agreement required the Kurds to vacate a swath of territory in Syria along the Turkish border in an arrangement that largely solidified Turkey’s position and aimst.

Pence hailed the cease-fire as the way to end the bloodshed caused by Turkey’s invasion, though he remained silent on whether it amounted to a second abandonment of America’s former Kurdish allies, many of whom are branded as terrorists by Ankara. The deal includes a halt to American economic sanctions and no apparent long-term consequences for Turkey for its actions. 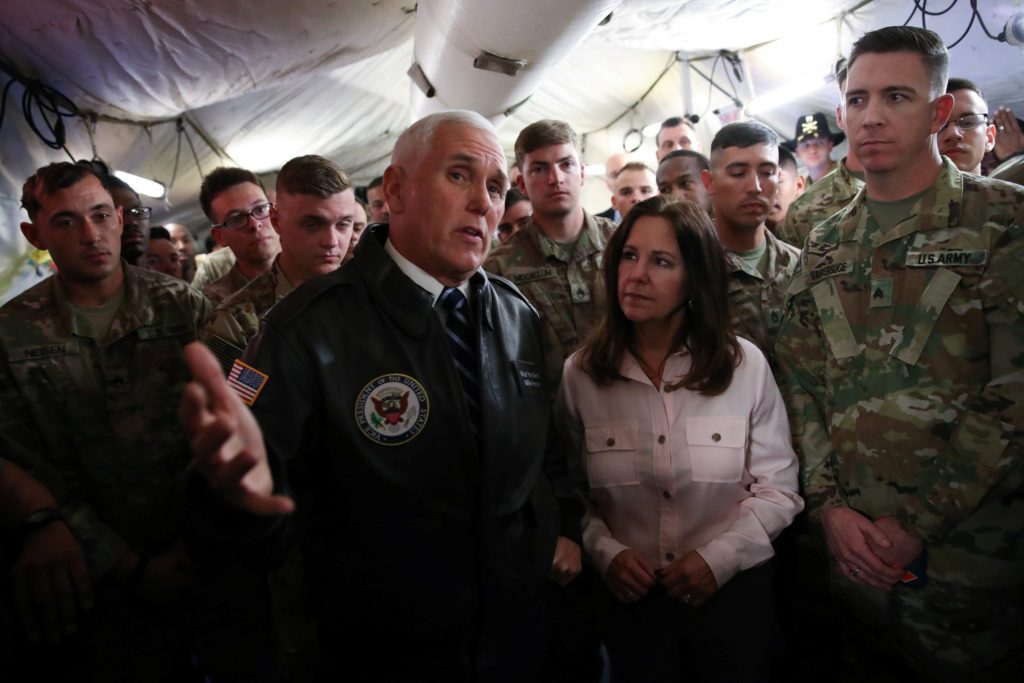 Barzani thanked Pence for the U.S. military support in the fight against ISIS, adding that his “visit at this particular time is an important indication of your continued support to Kurdistan and Iraq.”

Weeks after declaring the near-complete withdrawal of U.S. forces from Syria, Trump decided that roughly 800 would stay to keep eastern Syria’s oil fields from falling back into the hands of the Islamic State.

Just years ago, the militant group seized control of vast stretches of Syria and Iraq, with its extremist ideology spreading from its self-declared “caliphate” across the globe. In March, American troops and Kurdish forces routed the last IS territorial holdings. But the militant group, which arose from the remnants of al-Qaida in Iraq after that group’s defeat by U.S.-led forces in 2008, has ambitions to regenerate again. And it remains a dangerous threat in Iraq, Afghanistan and beyond.

Trump also agreed to keep about 150 U.S. troops at a base in southern Syria as a check on Iranian influence in the region.

While Trump has claimed that the U.S. was now “keeping” the oil, Pentagon officials indicated the U.S. presence is not intended to improve the oil infrastructure but to keep it in the hands of the Kurdish-led Syrian Democratic Forces.

Pence said the U.S. and Kurdish alliance was meant to ensure that IS or another extremist group “will not be able to gain a foothold in this region again.”

Pence, joined on the trip by his wife, Karen Pence, also greeted U.S. troops ahead of the Thanksgiving holiday, serving turkey and accompaniments to hundreds of troops at the two locations.

“While you come from the rest of us, you’re the best of us,” Pence told service members in a dusty hangar at Al-Asad. He said the Trump administration is working to secure another pay increase for the armed services and suggested the ongoing impeachment inquiry in Washington was slowing the way.

“Partisan politics and endless investigations have slowed things down in D.C.,” Pence said.

Pence’s visit to Iraq comes as the country has been plagued by widespread anti-corruption protests. At least 320 protesters have been killed and thousands have been wounded since the unrest began on Oct. 1, when demonstrators took to the streets in Baghdad and across Iraq’s mainly Shiite south to decry rampant government malfeasance and a lack of basic services despite Iraq’s oil wealth. The protests have exposed long-simmering resentment at Iran’s influence in the country, with protesters targeting Shiite political parties and militias with close ties to Tehran.

Pence spoke by phone with Mahdi after the Iraqi leader declined an invitation to meet with Pence at the air base after security concerns prevented Pence from traveling into Baghdad. U.S. Ambassador to Iraq Matthew Tueller said Pence expressed support for a free, sovereign and independent Iraq — a subtle warning against Iranian influence in the country, which has weakened cooperation between the U.S. and Iraq.

Pence also encouraged the Iraqi government to show restraint with the protesters. According to one official, Mahdi expressed regret for the violence and cast it as growing pains for the country and its security services, more used to war than democratic protest.

Iraq’s government has struggled to respond to the protests, and recent efforts by Parliament to pass reform bills fell short of calming the unrest. Parliament convened on Tuesday and voted on a bill to cancel the financial privileges of officials and conducted a first reading of a much-anticipated electoral reform bill, but these did not appease protesters.

The leaderless, mass protests aim to sweep aside Iraq’s sectarian system imposed after the 2003 U.S. invasion and its political elite, including Mahdi, blamed for massive corruption.

U.S. officials assess that the protests won’t subside unless Mahdi’s government makes substantial concessions, potentially up to the resignation of the government and the calling of early elections.

The unprecedented leak of 700 pages of what appears to be Iranian intelligence cables shows Tehran’s efforts to embed itself in Iraq and co-opt the country’s leaders, including paying Iraqi agents working for the United States to switch sides and infiltrate every aspect of Iraq’s political, economic and religious life, according to a joint report by The New York Times and The Intercept.

The revelation came after dozens of demonstrators attacked the Iranian consulate in Karbala earlier in November, scaling concrete barriers and saying they rejected the influence of the neighboring country in Iraqi affairs.

The cables, written mainly in 2014-2015 at the height of the war against the Islamic State group after it seized large swathes of Iraq and neighboring Syria, show heavy interference by Tehran to keep Baghdad a pliant client state.