The president led Biden by six percentage points in Pennsylvania with more than 80 percent of the vote counted Wednesday evening, down from the double-digit advantage he had Tuesday night, when early returns showed strong support from voters who cast their ballots in person on Nov. 3.

The state has received more than 3 million mail-in and absentee ballots. In Philadelphia, City Commissioner Lisa Deeley said Wednesday that the city had counted 233,000 out of a total of 347,000 mail-in and absentee-ballots along with 97 percent of the in-person votes cast Tuesday.

“I feel very comfortable [with the] progress we’ve made so far,” Deeley said at a press briefing. “We are working continuously and we will throughout the night to get this done.”

Elections officials in other parts of Pennsylvania told PBS NewsHour on Wednesday that they would not finish counting mail-in and absentee ballots in the state until late Thursday or possibly Friday.

The Biden campaign has expressed confidence it can carry Pennsylvania once all the votes are tallied. Democrats have voted by mail in far greater numbers than Republicans this election, and state Democratic officials noted many of the outstanding votes that remain to be counted come from Philadelphia and the surrounding suburbs, an area where Biden is expected to outperform the president.

“The overwhelming strength coming out of southeastern Pennsylvania will allow Joe Biden to win,” said state Sen. Sharif Street, the vice-chair of the state Democratic Party. Biden supporters “certainly voted in strong enough numbers to overtake the in-person lead that the president has been boasting about.”

Pennsylvania is one of a handful of states with no declared winner in the presidential election, and worth more electoral votes than any other remaining state.

In his election night speech early Wednesday morning at the White House, Trump predicted that he would prevail in Pennsylvania, Michigan and other states where he was leading as many of the votes were still being counted. The president also claimed without evidence that Democrats were trying to steal the election, and vowed to challenge unfavorable results in the Supreme Court.

The Trump campaign told reporters on a call Wednesday that it had won Pennsylvania, even though an official winner has not been declared in the state, and several members of Trump’s inner circle, including White House press secretary Kayleigh McEnany and son Eric Trump, tweeted incorrectly that Trump had won there.

The campaign also said Wednesday that it filed lawsuits to halt vote counting in Pennsylvania and Michigan — another key state where no winner has yet been declared but where Biden is currently in the lead — to obtain more access to monitor the vote-counting process.

But Democrats argued Trump had a weak legal case to try to stop the counting of ballots in Pennsylvania that were received by8 p.m. on Election Day.

Explore all elections maps and results

“Let’s be clear. The votes we’re talking about now that are left to be counted were received by Election Day,” Rep. Brendan Boyle, a Democrat who represents Philadelphia, said in an interview Wednesday. He added, “I don’t know how the Trump lawyers could twist themselves in enough of a pretzel to try and delegitimize legitimate votes.”

The state is also planning to count mail-in and absentee ballots that were postmarked by 8 p.m. on Election Day and received by 5 p.m. on Friday. Those votes cannot begin to be processed and counted until the Friday deadline. County boards of elections are keeping those votes separate in case they are challenged in court. 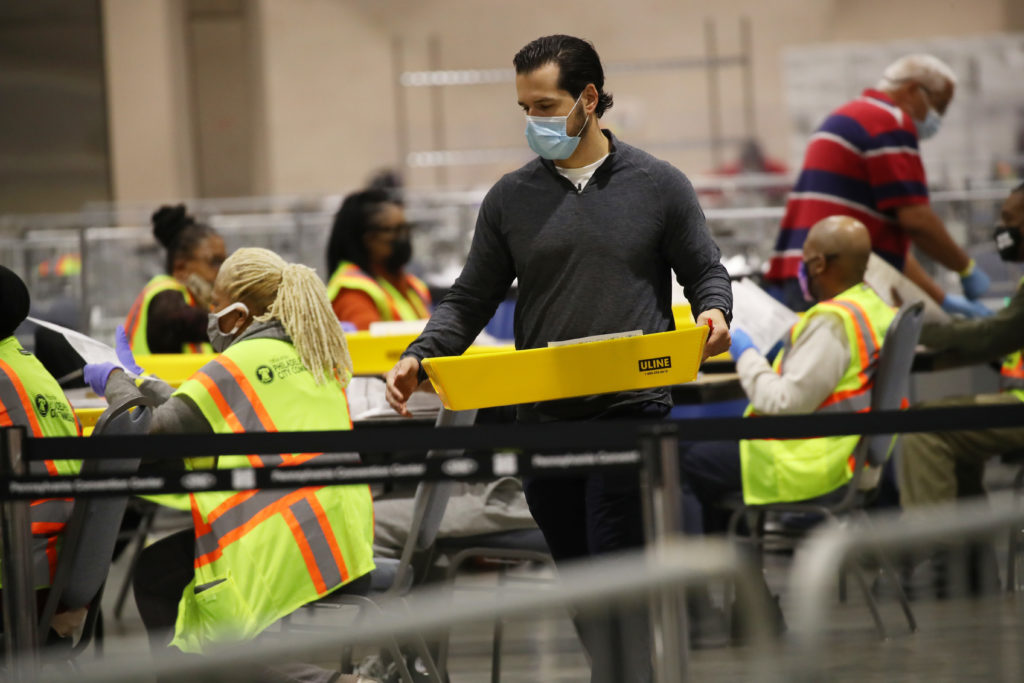 Election workers count ballots on November 04, 2020 in Philadelphia, Pennsylvania. With no winner declared in the presidential election last night, all eyes are on the outcome in a few remaining swing states to determine whether Donald Trump will get another four years or if Joe Biden will become the next president of the United States. (Photo by Spencer Platt/Getty Images)

State Republicans sued in a separate case to have those votes thrown out, and that case is now before the U.S. Supreme Court.

Republican voters in the Philadelphia area said Wednesday they were confident Trump would carry the state, and questioned why the results weren’t final on election night, even though elections officials explained it will take time to finish counting the mail-in and absentee votes.

“They don’t all count the votes on the night of the election? It’s insane,” said Matthew Barret, a Trump supporter. He added that he believed “you can easily find voter fraud in Philadelphia,” but did not offer evidence to support that. No widespread voter fraud has been reported in the city or anywhere else in the state.

“I think he’ll do very well” in Pennsylvania once all the votes are counted, Patricia Poprick, the Republican chair of Bucks County, said of Trump.

Democrats said Wednesday they were anxious about the outcome and closely tracking the legal challenges surrounding the vote count.

“I went to bed a little disappointed” Tuesday night that Biden wasn’t up on election night in Pennsylvania and other states, said Tom Scheaffer, a Biden supporter from Philadelphia. As more ballots are counted, “I’m feeling optimistic,” Scheaffer said. “But it’s not a done deal.”

Left: PHILADELPHIA, PENNSYLVANIA - NOVEMBER 04: People participate in a protest in support of counting all votes as the election in Pennsylvania is still unresolved on November 04, 2020 in Philadelphia, Pennsylvania. With no winner declared in the presidential election last night, all eyes are on the outcome in a few remaining swing states to determine whether Donald Trump will get another four years or Joe Biden will become the next president of the United States. The counting of ballots in Pennsylvania continued through the night with no winner yet announced. (Photo by Spencer Platt/Getty Images)