SEOUL, South Korea — The Pentagon has told the White House to stop politicizing the military, amid a furor over a Trump administration order to have the Navy ship named for the late U.S. Sen. John McCain hidden from view during President Donald Trump’s recent visit to Japan.

Trump’s top aide scoffed at the idea that anyone working for the White House might be punished. “We think it’s much ado about nothing.”

Shanahan confirmed details about a Navy email that said the White House military office wanted the USS John McCain kept “out of sight” when Trump was in Japanabout a week ago. The internal Navy email came to light last week, triggering a storm of outrage. 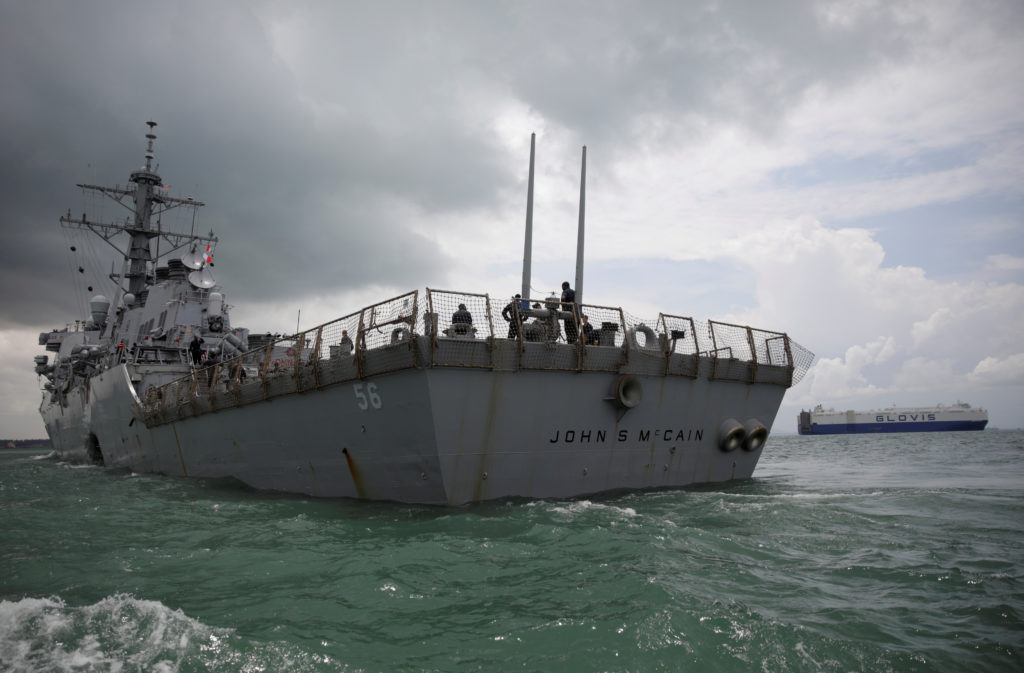 Trump, who long feuded with McCain, has said he knew nothing about the request, but added that “somebody did it because they thought I didn’t like him, OK? And they were well-meaning, I will say.”

Shanahan told reporters traveling with him to South Korea on Sunday that he is not planning to seek an investigation by the Pentagon’s internal watchdog into the matter “because there was nothing carried out” by the Navy. He added that he still needs to gather more information about exactly what happened and what service members did.

“How did the people receiving the information — how did they treat it,” Shanahan said. “That would give me an understanding on the next steps” to take.

Shanahan did not detail what those steps could be, but a defense official said Shanahan is considering a clearer directive to the military about avoiding political situations. The goal would be to ensure there is less ambiguity about how the military should support VIP events and how service members should respond to such political requests, said the official, who spoke on condition of anonymity to discuss internal deliberations.

Shanahan also said that he spoke with McCain’s wife, Cindy, a few days ago. He declined to provide any details. 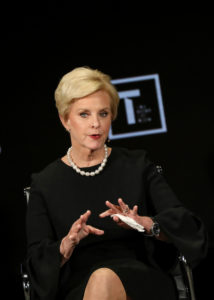 Cindy McCain, Chairman of the board of The McCain Institute for International Leadership, speaks on stage at the Women In The World Summit in New York, U.S, April 12, 2019. Photo By Brendan McDermid/Reuters

The order to keep the Navy destroyer out of sight reflected what appeared to be an extraordinary White House effort to avoid offending an unpredictable president known for holding a grudge, including a particularly bitter one against McCain.

Trump’s acting chief of staff, in appearances on two Sunday news shows in the U.S., said he did not expect anyone working for the White House to face discipline. “To think that you’re going to get fired over this is silly,” said Mick Mulvaney, making the comparison to someone who tries to sit bickering colleagues apart from each other at an office meeting.

“The fact that some 23- or 24-year-old person on the advance team went to that site and said ‘Oh my goodness, there’s the John McCain, we all know how the president feels about the former senator, maybe that’s not the best backdrop, can somebody look into moving it?’ That’s not an unreasonable thing to ask,” Mulvaney said.

The McCain incident has dogged Shanahan throughout his weeklong trip to Asia, even as he tried to deal with critical national security issues involving the eroding U.S. relationship with China and the continuing threat from North Korea.

Shanahan, who has been serving in an acting capacity since the first of the year, has yet to be formally nominated by Trump as permanent defense chief. His speech to a major national security conference in Singapore on Saturday was a chance to audition for the job on the international stage.

A formal nomination has been expected, and Congress members have said they believe there will be a hearing on his nomination in the next month or so. The McCain issue is sure to come up, but it’s not clear how it may affect either his nomination or confirmation by the Senate. It may well depend on what steps he takes to respond to the matter in the coming days.

According to Shanahan spokesman Lt. Col. Joseph Buccino, Shanahan told his chief of staff on Friday to speak with the White House military office “and reaffirm his mandate that the department of defense will not be politicized.” Buccino said the chief of staff reported back that he delivered the message.

Asked what he has learned about the incident so far, Shanahan said he was told that despite the White House request, the Navy did not move the ship and that a barge that was in front of it was moved before Trump arrived. He said that a tarp that had been draped over the ship’s name was removed, but that it was put there for maintenance, not to obscure its identity.

Asked directly if members of his senior staff were aware of the White House request before the president’s visit, Shanahan said he’s been told they did not know. He also has said he was not aware of the request and that he would never have authorized it.

What is still unclear, however, is who at the Pentagon may have known about the request and either agreed with it or chose not to discourage it. It’s also not clear whether Navy leaders deliberately chose the McCain crew as one of the ships to be on holiday leave during Trump’s visit, or if other measures were taken to ensure that the McCain was not visible from where the president stood when he arrived on the USS Wasp to make remarks.

The warship, commissioned in 1994, was originally named for the senator’s father and grandfather, both Navy admirals named John Sidney McCain. Last year, the Navy rededicated the ship to honor the senator as well.

Left: Acting U.S. Defense Secretary Patrick Shanahan talks to media during a news briefing after his meeting with his Indonesian counterpart Ryamizard Ryacudu in Jakarta, Indonesia, May 30, 2019. Photo By Willy Kurniawan/Reuters